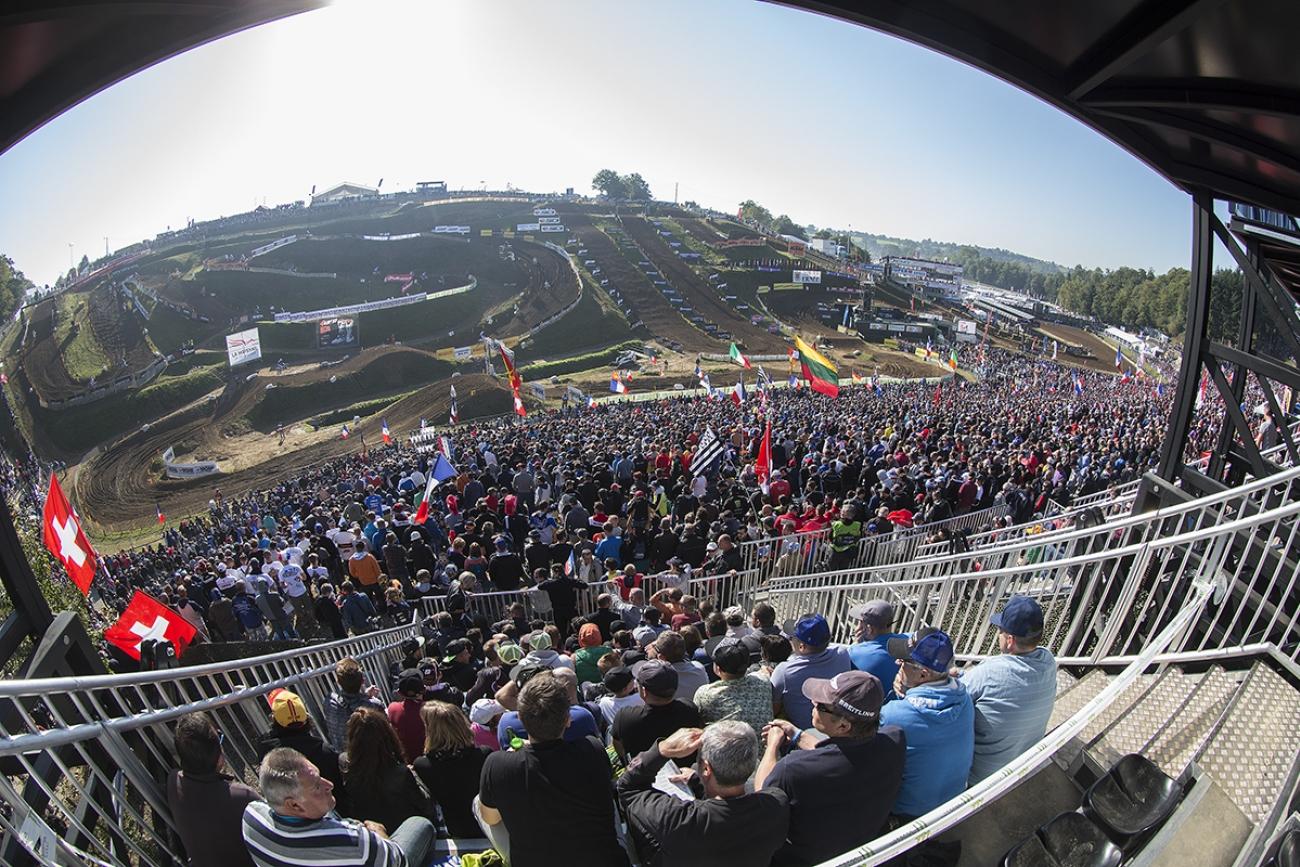 More often than not a major sporting event fails to live up to its billing. The ingredients might be in place, but typically there is a feeling of anti-climax. The 2015 Motocross of Nations took the fever, bedlam and vibrancy of the edition at the same Ernée circuit ten years earlier, turned it up to eleven, threw in a duel in several senses between the home nation and the USA and elevated MXGP World Champion Romain Febvre’s status to the very peak of the sport. Ernée was memorable all over again and even some people squeezed into the paddock who had been watching or working around the sport for several decades were surprised at the outpouring of excitement and celebration by a throng (a word for Racer X colleague Steve Matthes) of public that filled the amphitheatre circuit to capacity. On the face of it, Team USA was competing against three Frenchman…and another forty-odd thousand with the setting more akin to a coliseum.

Clearly a huge investment had been made by the club at Ernée that were bolstered by 12,00 volunteers in expectancy of a “2005-gone-large”, and the tight and restrictive hillside track had been softened considerably, carving into various line options and long, tricky ruts. Red Bull KTM’s Marvin Musquin in particular seemed to relish the technical challenge and his skill and judgement in certain sections was a joy to behold.

After Saturday’s qualification whitewash by the KTM man, Febvre and HRC’s Gautier Paulin it was clear that the French would be hard to topple on their own patch and with such a sturdy wall of support on one side of the valley landscape. Team USA were up to the task and from the launch of the three motos on Sunday it was clear that marginal gains would be made from mistakes or fallacies from the gate.

A holeshot for AutoTrader.com/Toyota/N-Fab/JGR Yamaha’s Justin Barcia and then in the second moto for Yamalube/Star Yamaha’s Cooper Webb were two essential factors in the tight points situation after two races. Barcia’s launch led to a great tussle with Musquin, who was clearly the superior 250 rider on the day. “It was my favourite type of racing,” he said. “It was aggressive and clean and I like Marvin as a person and it was great racing today and it was a challenging weekend.”

Webb’s getaway sparked a battle with Febvre, who chased the 450 and Nations rookie (Febvre also first-time pick for the reigning champs) that renewed their dispute from Glen Helen and the Monster Energy MXGP of USA the previous week. They toyed for a slice of the moto but eventually Febvre cleared.

France, meanwhile, were slipping up. Musquin had crashed in his adventures with Barcia and dropped back two spots. “It was really cool to catch Barcia but I got too excited,” he explained. “The crowd was going crazy. I made too many mistakes and went down. It was a bit scary because I landed on my back, but when you have a crowd like that behind you then you just want to get back on the bike and give 100 percent and that's what I did. Fourth was not too bad considering the crash.”

Paulin was also on the deck and out of a potential top three finish in the first moto. “It was scary moment,” he explained. “I landed, got on the brakes and hit a stone. I didn't expect that and lost the front. Max Nagl hit my bike and the levers and bars were a bit bent.”

For the Americans it was Jeremy Martin who was the rock. His brace of fifth positions and consistent riding in MX2 meant that the duel would go down to the last.

When it really counted in the last moto both Barcia and Webb admitted that they missed their starts. Febvre was soon dealing with standout performer Ben Townley for New Zealand (the 30-year-old did not give the Frenchman an easy escape once he moved through and provided a snapshot ten years earlier when he gave chase to Ricky Carmichael on the same ground) while Paulin was mid-top ten. The Yamahas of the Americans were coming from mid-pack. Barcia was exceptional and plowed a fresh set of ruts all the way to third, while aware he needed to gain ground, positions and points as quickly as possible. Webb stalled before the pit lane in an early phase of the race and could do no better than sixth, which was the team’s throwaway result. With another lap Barcia might have had second place but it would not have been enough. The gap was two points to France’s first ever Chamberlain Trophy defence. It was close in more ways than one. The difference was Febvre’s mastery.

“To come here with a lot of pressure from the crowd was something special and I have never had it before. I’m really pumped that we won again,” he said. “To cross the line first at any time is always special but to win the Nations in France for sure it was the best experience.”

The third step went to podium regulars Team Belgium and Yamaha’s Jeremy Van Horebeek’s 4-7 was the cornerstone. Standing Construct Yamaha’s Julien Lieber bagged a twelfth despite a wrecked hip that will need an operation in two weeks time and Red Bull KTM’s Ken de Dycker defied his critics with a ninth in the final moto that made sure of Belgium’s turnaround.

For the rest of the Grand Prix elite: Netherlands Glenn Coldenhoff struggled with a sore right shoulder but still posted two top tens for his country and will now remain in that orange shade heading into 2016. Double GP winner Shaun Simpson rode at 80 percent fitness after his Glen Helen back injury and a run-in with a backmarker on Saturday that knocked his left arm and knee. The Scot collaborated with Dean Wilson for a decent set of results for the Brits (6-8-8-11) and just one reasonable finish from the injured and absent Max Anstie— knocked out and with shoulder and T3 fractures from Saturday—would have given the British their elusive first podium finish this century. Red Bull KTM’s MX2 title hope Pauls Jonass pulled out of representing Latvia after three falls on Saturday and class peer Jeremy Seewer was impressive as Switzerland’s most consistent racer (third in MX2) and showing that with the speed of Arnaud Tonus the cheese, chocolate and watch specialists might have also been in firm podium reckoning. MX2 World Champion, HRC Gariboldi’s Tim Gajser, was on his preferred CRF450R but barely figured for Slovenia and was also a crashee.

Team USA were clearly a disappointed trio after the event, denied victory for the fourth year, but clearly felt some satisfaction in being part of the spectacle. “The Motocross of Nations is a one of a kind,” said Martin, second overall in MX2. “It is something you want to be a part of as a racer. I have never heard fans so crazy. When you were on a French rider then you knew it! I’ve never heard so many chainsaws in my life.”

“The fans are unbelievable,” commented Barcia. “When I was behind Marvin I could hear all the cheering and then when I came around in front of him I couldn't hear anything. They kill it. It will be nice to have one of these races in the U.S. The fans will be pumped up.”

Webb: “We don’t have anything like that [crowd and atmosphere]. I thought in Glen Helen [last week’s Monster Energy USGP] the fans were good there but this was a whole new level. I knew when Romain was on me, for sure! It was extreme and you had to stay calm and push it aside but it was hard when everybody was so loud and behind their team.”

Ernée raised the bar in one of the warmest hotbeds for the sport around the globe and increased the heat to furnace levels last weekend. There was a fuzzy glow about the venue when the heaving and departing masses started to create traffic in the access roads. What would have made it better? Not much…perhaps seeing Dungey versus Febvre would have matched the two champions but Barcia can leave with his head held high. For 2016 you have to add Cairoli to any dynamic. Back at Maggiora for the first time since that iconic 1986 incarnation, Italy will be the new source of home support…but the Italians will have some way to go to match the French.