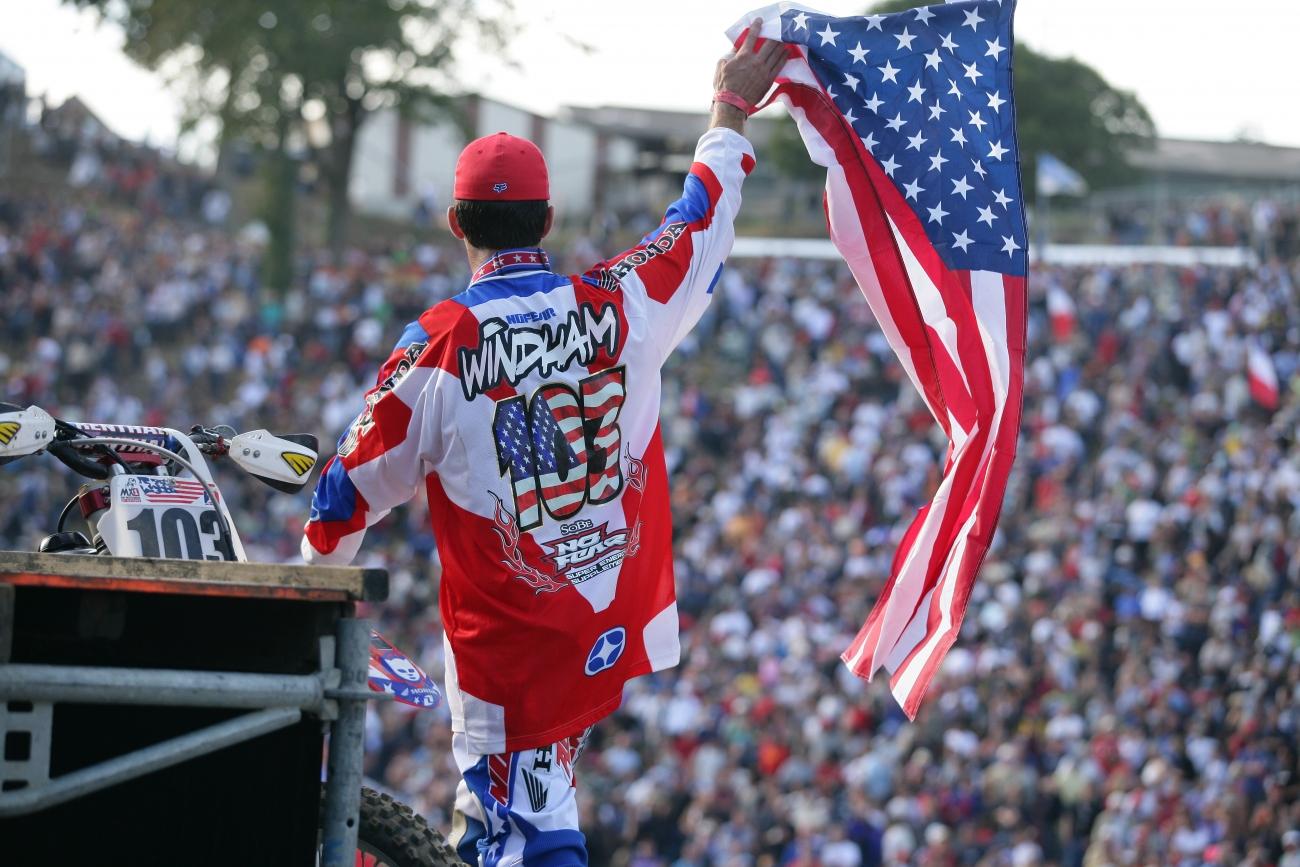 Counting down the days to the 2015 Monster Energy FIM Motocross of Nations in France, we’re looking back at each of the twenty-two winning versions of Team USA. Today we reach 2005. If you missed any previous years, you can view them all here.

Although it’s an event based on international competition, the Motocross des Nations usually runs devoid of any influence from actual international politics, wars or tragedies. But the terrible events of September 11, 2001, impacted this event. The ‘Nations was scheduled for September 29-30 at the famous Circuit de Namur in Belgium, and no American was ready to fly into foreign airspace less than three weeks after September 11. The team—Ricky Carmichael, Kevin Windham and new 125 National Champion Mike Brown—decided not to participate. The French team, for so many years strong but luckless at the event, finally grabbed the win with veterans Yves Demaria, Luigy Segui and David Vuillemin.

Somehow, the circumstances around Team USA’s 2002 absence were even stranger. In a huge shocker, Dorna, manager of the Grand Prix circuit at the time, announced the event would take place in the United States at Competition Park, a local track in Southern California. Comp Park had been around for some time, but with the des Nations announcement came word that an all-new track would be built on a California Indian reservation. A non-existent track holding the Motocross des Nations as its first-ever event was puzzling. Also strange was a significant rule change at the event, with the elimination of 125 class. The Americans announced a team of Carmichael, Tim Ferry and Mike LaRocco—all on big bikes.

But this all-new track never materialized, as construction seemed sparse, and then came legal issues with the Indian tribe that owned the land. It all spun out of control and the race was cancelled just two weeks before the scheduled date. Foreign fans and teams had arranged travel for a race that wasn’t going to happen.

To appease them, a cool one-off event was hastily held at Glen Helen, dubbed the World Cup of Motocross. Makeshift teams ruled the day, and Team Australia won. Carmichael and LaRocco elected not to race, so Team USA featured Ferry and SoCal locals Sean Hamblin and Kyle Lewis (there’s some trivia for you). The actual des Nations was rescheduled for Spain a few weeks later, and the American team, tired of the fiasco, didn’t go. Italy won the event.

Things were back on track for 2003, in Zolder, Belgium. Again the teams featured riders on big bikes, with Carmichael, Ferry and Ryan Hughes (racing a KTM 450, although he had narrowly lost the 125 National Championship) on board. The format was changed again, though, to a strange one-moto format. All anyone really wanted to see was a Stefan Everts versus Carmichael battle. Everts, the King of Motocross in Europe, completed an amazing season in which he won the MX1 world championship while also competing in MX2 on a 250F (he started racing the 250F halfway through the year, taking advantage of the one-moto format, and won every time he lined up). At the final GP of the year, Everts hopped on a bored-out YZ450F to race the MX3 class, and won all three Grand Prix classes in one day! Even crazier, Everts even entered the ISDE in Brazil and won the individual overall there!

Everts and Carmichael had never really squared off. To say Everts had momentum heading into the ‘Nations on home turf was an understatement. Carmichael ended up winning the battle, but Everts’ Belgian team won the war. In the one moto, Carmichael got a bad start and simply ate the field up, including Everts, to take a memorable moto win. But Ferry crashed and hurt his thumb, and Hughes derailed a chain. Belgium won the event, and Team USA crowed about the one-moto format, which offered no room for bad luck.

All these controversies weren’t doing the team any favors. American factory teams started complaining about spending big money at an event that didn’t air on American television, and, as usually was the case during a losing streak, American fans were losing interest. The team’s 2004 prospects weren’t looking good, either. 125 superstar James Stewart couldn’t race since the event had become big-bike only, riders were losing interest, and the team simply never came together. In the Netherlands, the Belgians won again.

If Team USA were to return, major changes were needed. The one-moto format would have to go, and a sponsor would have to be found. Luckily both things happened, as the old three motos/three classes format returned for 2005, and our sister company, MX Sports, became Team USA’s title sponsor through the Loretta Lynn’s program (officially, the team was called Loretta Lynn’s Team USA, and the team graphics sported Loretta’s signature). To further build buzz, a pep rally was held during the Amateur National at Loretta’s, with team members Windham, Carmichael and Ivan Tedesco on hand.

Only, Tedesco wasn’t originally on the team. Early in the summer, veteran Mike Brown led the 125 Nationals as a privateer (yes!) and got the selection (poor Brownie was on the 2001 team that never competed). Brown’s results started to wane though, while Tedesco began to surge, and the team switched riders.

The assembled group was more than good enough, and the renewed effort powered them forward win in Ernee, France. Like the 2000 event, the home team, this time featuring Mickael Pichon, Vuillemin and Sebastian Tortelli, promised to bring a strong challenge.

Carmichael dominated the first moto while Tedesco pulled through for first 125.

A scare came in moto two, when Windham, while leading, crashed, damaged his bike and then crashed again much harder. He managed to salvage a fifth. Meanwhile in the 125s, Tedesco was literally in a knock-down-drag-out duel with Tortelli, and they collided while fighting for the lead. Tortelli got away but then crashed again, while Tedesco finished way back. France and Team USA were tied heading into the final moto, with Team Belgium just behind.

Carmichael stepped up again, holeshotting the moto and then even throwing a block on some riders to help Windham sneak through into the lead. Carmichael passed Windham back and took off, while New Zealand’s Ben Townley also made the move on K-Dub for second. Windham held off Pichon and Vuillemin, though, and the 1-3 team scores were more than enough for the Americans to win. Everts, by the way, was plagued by bad starts and crashes all day, and that thwarted Belgium’s hopes.

After the thirteen-year Team USA win streak ended in 1994, the team won just three times in eleven years. The 2005 win put the effort back on track, though, and another win streak was about to begin.