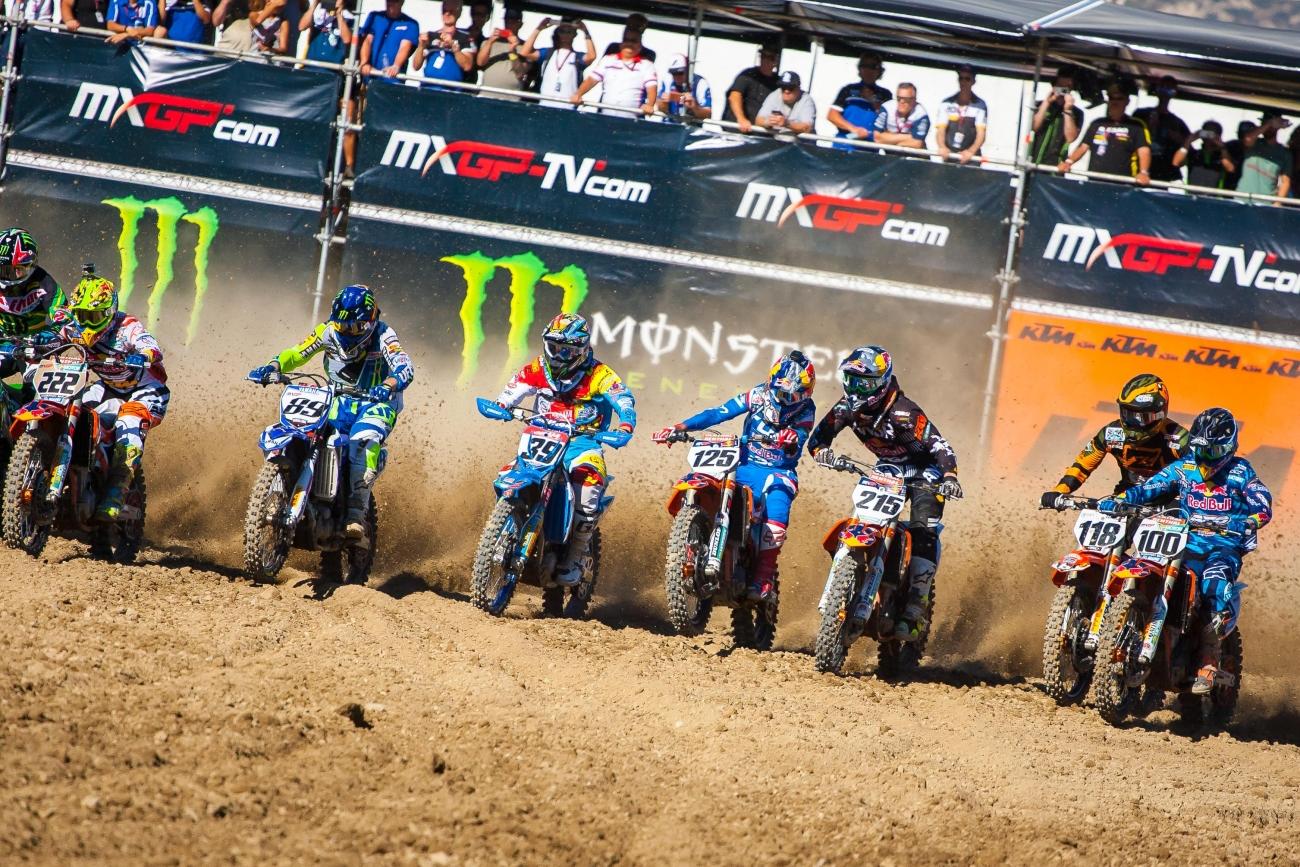 The latest incarnation of the USGP is taking place this weekend at Glen Helen under soaring temperatures and typical tough track conditions. It’s round 18 of the FIM World Motocross Championship, the last one for the weary world travellers who were in Mexico a week ago and the series regulars have been living out of suitcases for three weeks now. The MXGP title is wrapped up with Romain Febvre taking a surprise win this year, but the MX2 class has yet to be decided. With today’s motos still on the docket, Honda’s Tim Gajser has an 18-point lead over Red Bull KTM’s Pauls Jonass.

Today there were two practice sessions with only the second one really meaning anything, which for gate pick today. Teams and riders to shake off the travel effects from Mexico yesterday and dial the bikes in for the much-different-than-they’ve-been-racing Glen Helen circuit.

When the gate dropped for the MX2 qualifying race it was American Thomas Covington who shot to the front and looked to have the holeshot. Last week was Covington’s first ever GP win and he looked great out there early on. Covington would go to finish seventh after a bobble, but he did set the fastest lap of the race.

Shane McElrath, a sleeper with good practice times earlier in the day, grabbed the lead early and was never really challenged. Dealing with a nice gap of about three seconds, McElrath opened it up to almost ten by the end.

“The start was pretty muddy and the first turn wasn’t very wide because of that,” said McElrath at the press conference. “I came out fourth or something and the first couple of laps I was just settling in. I just tried to keep it on two wheels and about halfway through I found my groove and felt good on my bike.”

Gajser and Jonass were together most of the race until Jonass blew up his KTM and DNF’d. With the qualifying races determining your gate pick for both motos tomorrow, Gajser’s 18-point lead seems a tad safer now.

Valentin Gulliod finished second, Gajser third and Finn Harry Kullas fourth. A bad start did Jessy Nelson in and he was forced to work his way from way back to sixth by the end.

In the 450’s it was Team USA’s Cooper Webb grabbing the holeshot and leading early. Well, Webb actually rides for Star Yamaha but he’s using this race as training for next week’s Motocross of Nations in France. Webb looked great out there as he led early.

But the man of the race was Monster Energy Kawasaki’s Josh Grant, who we know rides this Glen Helen track well. Grant, running #35 instead of his usual #33, moved around eight-time world champion Antonio Cairoli and into second early then set his sights on Webb.

It wasn’t too many more laps before he snuck around Webb on the outside of a turn and took off into the lead. Although the gap went from 1.1 to 3 seconds here and there, by the end Grant had pulled away to a relatively easy win in the twenty minutes plus two lap qualifier. Webb had his hands full with the new world champion Romain Febvre but the Frenchman couldn’t make a pass stick as the two Yamaha’s raced up and down the hills. Looking at these two, it’s not hard to see the same race shaping up next week—but that will be on Febvre’s home soil.

“I had a good day today, I’m just getting used to the format and the track. I know it’s going to be hot tomorrow so I’m just trying to stay cool because they’re calling for triple digits temps tomorrow,” said Grant after the race. “[I] found some good lines and got around the guys. I’m lucky I had a clear track. With the sun beating down it was hard to see. With me knowing this track, I knew where to go.”

As far wearing himself out on this day that doesn’t mean much, Grant offered up that Ryan Villopoto had given him some good advice to not go all-out today and burn himself out which Grant said he didn’t.

Jason Anderson who didn’t get a great start but rode well to get a fourth and then came Cairoli, who is back at the GPs for the first time since his injury in Italy.

“I’ve been on the bike for a week. It’s bit difficult to come back for a track like this,” said Cairoli. “I feel good for three laps but then I couldn’t fight the bike much. I’m happy, I don’t want to crash and this is a test for some parts for next year. Even though I’m not in shape, it’s still the best testing there is. I was happy with my race, tomorrow I try to do a bit better.”

Wilson fell in the second turn and worked his way up from way back to fourteenth. Davi Millsaps made his debut for BTOSports.com KTM and finished thirteenth after being pretty far back. Marvin Musquin was charging hard also from the back to make it to tenth.

So that’s it here from Glen Helen, the sun sets on Saturday qualifying and the GP racers have one more day left in their long year. Americans swept the two qualifiers but it’s two more motos tomorrow that are longer. Should be an interesting day of racing. Follow us on Twitter and Instagram for all the action from the Hills of Helen.