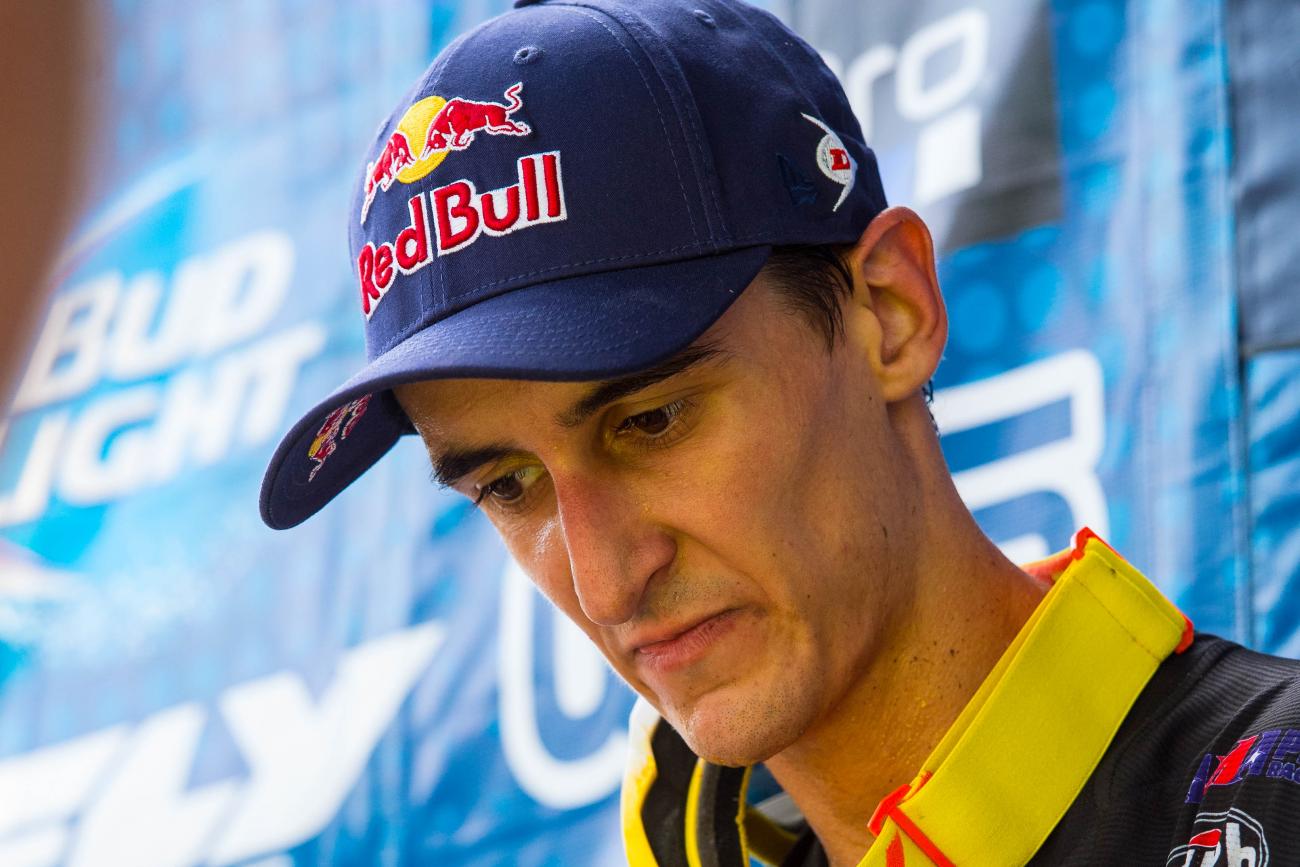 By Steve Matthes and Jason Weigandt

Oh, what heartbreak for Marvin Musquin. The Red Bull KTM rider was ready to slug it out for the Lucas Oil Pro Motocross 250 Championship with Jeremy Martin, but his bike cut out just two laps into the first moto at the Bud Light Ironman National. Just like that, Marvin’s long, hard-fought attempt to win this title was over. Marvin was a nice enough guy to be willing to talk about it after the day was over.

Racer X: That really sucks what happened.
Marvin Musquin: Yeah, it does. Dealing with the pressure this weekend, I knew I was hunting—I was not the hunter. Jeremy was leading, but I was right behind in the championship. I was ready for this weekend. I like that track, but honestly I didn’t expect that it was going to get so rough. It was so bumpy and kind of sandy in some areas. But anyway, that first moto, I was right next to Jeremy on the gate and I kind honestly tried to hold him off on the start. You’re battling for a championship—I didn’t want to be dirty and send him off the track but kind of block him a little bit. I was actually in front of him and making ground because I didn’t get a great start. I was not up front, but I was passing people and then I was in good position. Honestly, I felt good, but it was only two laps in and then my bike started having a problem. It’s crazy. Not one problem all year long. The team is doing an amazing job. The bike was on point all the time, and it happened today.

Was it electrical, fuel, or something inside the motor, transmission—something like that?
I don’t even know.

You started, right? You rode it back a little bit.
Sometimes, but it was cutting out. It’s [fuel] injection bikes—you can have a lot of problems [like what] happened to Martin or something like that at Glen Helen with the electrical. It’s part of the sport and it’s a big bummer.

When did you first realize you had a problem? You turned the throttle at some point and realized, uh oh? Do you remember how it happened?
Yeah, totally. You know that big step-up on the very left side? I was about to pass one of the GEICO guys, and then in the air, the bike kind of cut, like no fuel anymore. And then it worked again; it was like cutting on and off. I was like, really? Why does it have to happen right now? I have a great bike, like I said. I never had any issues all year long. Bike was on point, and it has to happen right now. I was in front of Jeremy—that’s what I needed today. I know it was only two laps, but I was ready to fight.

You also had the first lap you had that moment; you did like a nac-nac. It was an awesome save though.
It was a good save for sure. When I realized my left leg was on the right side of the bike, I was like, holy cow. And then I saved it and kept going. I was making passes and I was feeling good….

Second moto, I guess you’re like, “Hey, I got a small chance—I’ve got to try my best,” right? But it’s got to be hard to get really motivated.
Yes and no. I just have great people behind me, and especially Franky [mechanic] was working on the bike, and me and Mathilde [wife] were in the truck and getting ready. Obviously, really disappointing, but I have a great wife. She’s unbelievable. She’s so strong and she wants the best for me, for us. We tried our best and we got ready for that second moto. And then I realized the gate pick is based on the first moto, so I was like, damn, that start, if you’re not inside, outside is really far. So, anyway, I actually tried my best and made up some ground and ended up third. If we look at the points and I were to get second and Jeremy DNF, it would have been possible, but hey. Bad luck happens sometimes, but not all the time. But congratulations to him. When you see the season he did last year, it was really impressive. I felt like this year I was here to battle with him. I was actually, I would say, the only one. When you see the third place, they [Joey Savatgy] were really, really far behind in the points. But you look at the first place, and I’m just proud to battle for the championship. I came up short, but that’s the way it is.

Thanks for an entertaining season. You didn’t win, but like you said, there wasn’t much separating you and Jeremy. And thanks for doing this interview. Some guys wouldn’t want to talk. We get it—it’s disappointing.
Thank you. Nothing I can really do right now. I’m healthy. I have a great life, great people around me. It’s a big bummer, I know, but I’m happy.