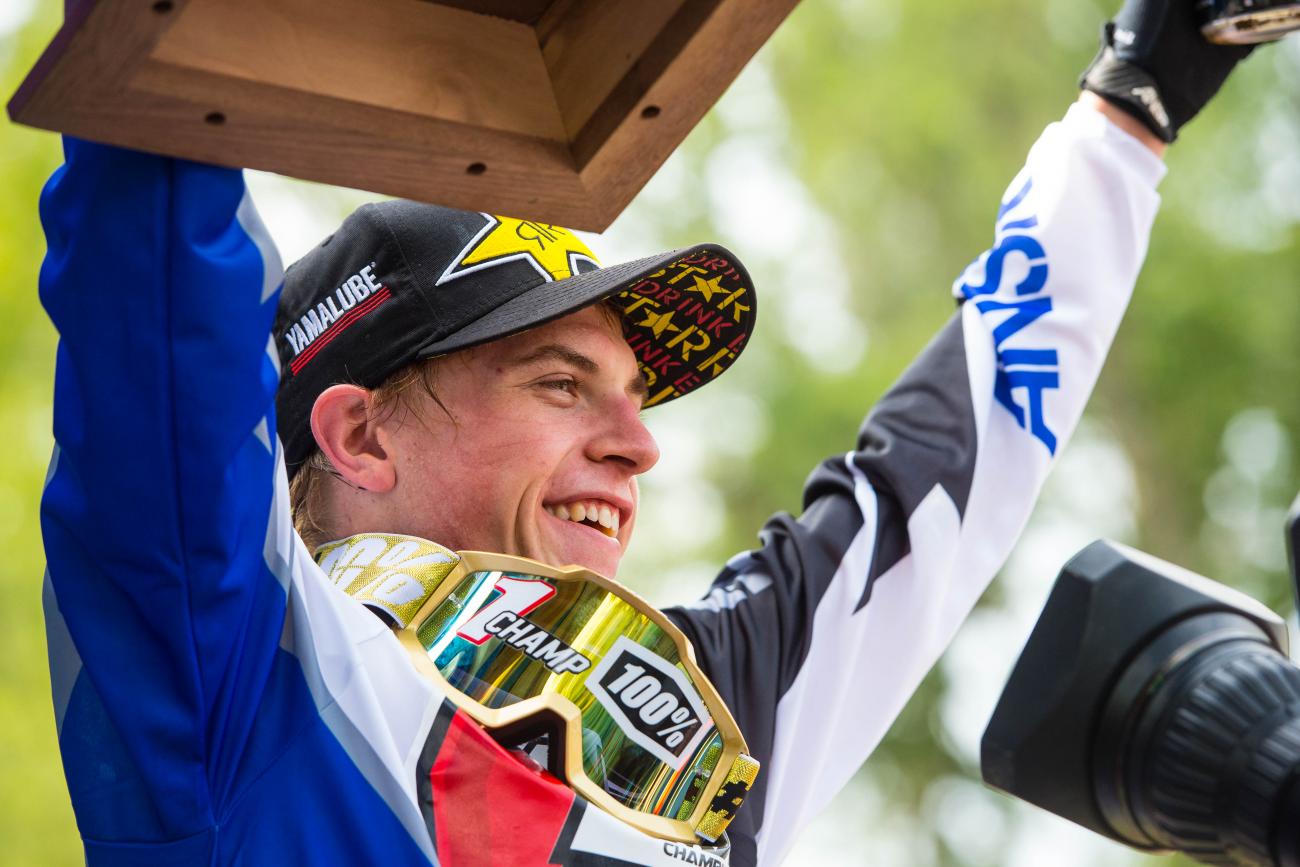 Yamalube/Star Racing Yamaha’s Jeremy Martin became the first Yamaha rider since 1979 to successfully defend his 125/250MX Championship on Saturday. Martin entered the weekend just 2 points clear of Red Bull KTM’s Marvin Musquin, but essentially clinched the title when Musquin suffered a mechanical failure in the first moto and failed to pick up any points. Martin “settled in” from there and rode to his second straight title with a ninth-place finish in the second moto. He talked with the media at the post-race press conference.

Racer X: Take us through the day. Had to be a little stressful. How were you feeling throughout the day? Did you know Marvin had pulled out?
I was definitely pretty nervous—I’m not going to lie. If I was nervous, I think Marvin was nervous. It was just going to come down to the better man. I knew that it would come down to the last moto, the last race of the year. So I was mentally prepared for it. It didn’t bother me. A lot of people were coming up and saying, “Hey, 2-point difference…” and stuff like that. So not being an asshole, but I was real short with them. I was just like, I’m here to do my job and focus. I’ve worked my whole life for this.

How different is this one than the one last year?
The first one was sweet. I’d say this one was even sweeter. It was a lot harder to me; it felt a lot harder. I know it was. Marvin was really on his game this year. I think he [Cooper Webb] would have been right in there, too. Unfortunately he got hurt. But the second one’s awesome, and to be able to defend my title on the first try, that’s big.

I think you [and your teammates] went 1, 2, 4 last weekend, and this weekend kind of similar. Are you guys feeding off each other? What’s the vibe like under the tent?
The vibe is pretty good. Me and Coop and AP [Aaron Plessinger], they’re doing their gangster stuff and dance moves. Before the motos they got their headphones on together. They’re one of a kind. They’re a good crew. Then Swanny [Gareth Swanepoel], he’s in there too. I like to pick on Swanny and crack jokes and stuff with him. And I got Johnny O’Mara, and I do like him. So everything seems to work pretty well. I think the vibe’s good. Next year is going to be a tough season. AP is going to be a handful, Coop will be a handful, but I’m looking forward to it.

Talk about how you approached the championship this year. Was it different? What was the feeling like? You looked like you were having a little more fun. It was up and down during the season but it looked more fun to me.
I’m a little older now and more mature. Racing is a big part of my life and even though the season definitely had a couple downs, I might not be able to control that but I can still have fun, and realize that this is the dream job and not everybody gets to go to work every day and they’re pumped on their job. I’m fortunate enough to be able to do that. With Johnny, we just have a good vibe. I was in great shape. It’s a lot harder I think to defend your title.

Jeremy, I think you’re the first Yamaha to defend since ’79. Did you know that coming in?
No, I didn’t know that. Today was a great day for Yamaha. Cooper rode really strong; Aaron rode strong. For the hometown race and to get the overall, it’s truly an amazing feeling. Some people say it’s the home-track advantage, but I promise you Aaron rode really good today. I got a chance to battle with him a little bit in moto one, and he was on another level today. Just in the motos he had great lines, and he was using those long legs to help him get over the big breaking bumps. He was just creative out there, and I think that’s why he got the overall today.

That first moto, did you back it down at all? It seemed like you started charging a little bit and then maybe you figured out that Marvin went down. Or did you just keep pushing the whole way?
No, I settled in. I just rode smart both motos.