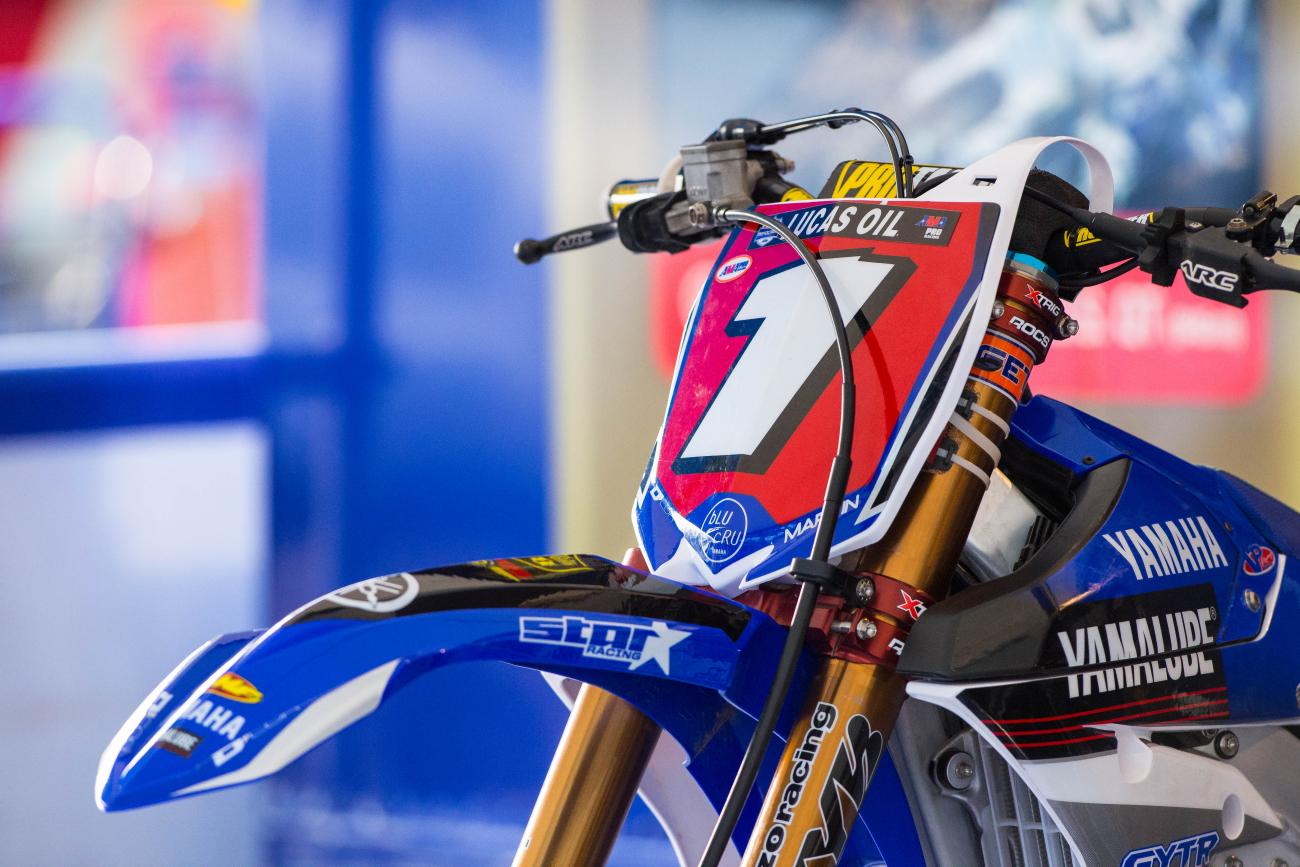 It may not have been the prettiest way to clinch a championship, but Jeremy Martin will take it either way.

Entering the second moto twenty points clear of Marvin Musquin, after Musquin DNF’d the first moto due to a mechanical, Martin started outside the top fifteen in moto 2 and had to work his way to ninth by the checkers to clinch his second straight 250MX championship. Musquin would finish third.

Star Racing enjoyed a banner day, as Aaron Plessinger passed Joey Savatgy late in the second moto to secure his first career moto win, and his first career overall win. Plessinger is the only 250MX rookie to win a moto this season. He is also the third member of Yamalube/Star Racing Yamaha to win an overall (Jeremy Martin and Cooper Webb).

Jessy Nelson was the early moto leader, fending off Joey Savatgy on the start, but after stretching out his lead early in the race, Nelson fell while out front and would go on to finish third.

Moto 1 winner Cooper Webb crashed on the uphill triple early in the race and did not return to action.

Martin becomes the first Yamaha rider to successfully defend this title since Broc Glover in 1979. The win is also big for his team, Star Racing, which has now won two consecutive 250MX championships, and two of the three major titles in the 250 Class in 2015. (Cooper Webb won the Monster Energy Supercross 250SX West Region Championship. Also a first for Star Racing.)

There is no denying that Ken Roczen’s season didn’t go as planned. He dealt with a myriad of injuries, reported team problems, and failed to defend his 450MX crown. For all the things that went wrong, Roczen never gave in, pushing right up until the final checkers.

We don’t know what changed today, but Roczen was strong from the start. After the start of the second moto was red flagged for Kyle Chisholm to receive medical attention after crashing on the start—Chisholm did get up under his own power, but did not line up for the restart. There is no official word if he sustained any injuries at this time—Roczen powered his way to the front, passing the likes of Ryan Dungey and Christophe Pourcel—on the same lap—en route to his first moto win since High Point. Roczen had gone thirteen motos between wins.

With his win, Roczen secured second in the championship, as early leader Justin Barcia, fell back to third.

Ryan Dungey made an uncharacteristic mistake and went down shortly after Roczen made his pass. Dungey remounted in seventh and worked his way back up to second, giving him enough for the overall on the day—his fifth straight.

Even Jeremy Martin didn’t want it to end this way.

Just 2 points separated Jeremy Martin and Marvin Musquin as they lined up next to each on the starting line for the first moto of the day. In a championship that’s seen enough twist and turns that it belongs in Hollywood, the final twist may have taken place today in Crawfordsville, Indiana—with Marvin Musquin on the losing end of the stick.

For a brief period, it appeared we would get what we all wanted—a battle between the two titans for the championship. The duo started around fifth and sixth respectively, behind the lead of GEICO Honda’s Matt Bisceliga and RJ Hampshire, along with Cooper Webb. Musquin moved toward the front swiftly, making quick, confident passes as he pushed his way into third. Martin wasn’t trailing by much, sitting just behind Shane McElrath when the championship went up in smoke for Musquin. His bike had let go, leaving Musquin pushing his championship hopes back to the pits.

Martin would go on to finish fourth, picking up eighteen points on Musquin. With just twenty-five points remaining, and a twenty point lead, all Martin needs is six points to clinch his second consecutive championship (Musquin currently holds the tie-breaker with ten moto wins to Martin's nine)—not a guarantee, given how this championship has played out.

And what a day thus far for Martin’s entire team, as Star Racing took three of the top four spots with Webb securing his first win since Washougal, and Aaron Plessinger racing to a career-high second after passing Martin late in the race. It was Plessinger’s second moto podium in the last four races and arguably his most impressive ride as a pro, as he pulled to within less than a second of Webb on the final lap, falling just short of his first career moto win.

Jessy Nelson would pass Martin with three laps to go in the moto, giving him his first moto podium since Tennessee. Joey Savatgy, Bisceglia, Chris Alldredge, Hampshire, Christian Craig and Zach Osborne would round out the top ten.

Ryan Dungey refuses to settle, despite the fact that he wrapped up the 450MX Championship last weekend in Utah. With his third 450MX title already in hand, Dungey sprinted out to an early lead in front of the Husqvarna duo of Christophe Pourcel and Jason Anderson.

As Dungey began to open the gap over Pourcel, Justin Barica and Ken Roczen were working through the pack after bad starts. Barcia was the first to make the move on Dean Wilson for fifth, and Roczen soon followed. (Wilson would drop back to finish ninth.) While Barcia would eventually drop back to seventh at motos end, Roczen put on a late charge that we haven’t seen in quite some time.

He attacked Barcia with three to go, taking Blake Baggett along with him. Next up was Justin Bogle, who Roczen passed on the following lap. Baggett’s charge would end there, as Bogle held him off for fifth. Meanwhile, Roczen began to work on Pourcel with a lap remaining, eventually making the pass for third. As the final lap wound down, Roczen pulled to the back of Anderson for second, but ran out of time.

Up front, Dungey was running away, opening up an over twenty second gap on Pourcel, and later Anderson, who had moved into second, going unchallenged en route to his sixth straight moto win and ninth over the last eleven motos. Anderson and Roczen would round out the podium.

The boys of Lucas Oil Pro Motocross have a lot to live up to this afternoon, as the Legends “Exhibition” Race turned out to be taken a little more serious than expected. (Well, we kind of expected it, right?) Anyway, Guy Cooper got out front early before being tracked down by the GOAT, Ricky Carmichael. Kevin Windham and Robbie Reynard eventually moved to second and third and keep RC honest for much of the early part of the four-lap race.

Windham eventually trailed off, leaving Reynard to try and track down Ricky—no easy task. Reynard did pull close, but despite a valiant effort he didn’t have enough for RC over the final two laps. Tim Ferry finished third in front of Windham.

Practice has wrapped up at Round 12 of Lucas Oil Pro Motocross from Ironman Raceway in Crawfordsville, Indiana, and Red Bull KTM’s Ryan Dungey has locked down the top spot in 450MX. A 2:22.577 from Dungey in the second session was nearly a full second faster than Justin Barcia’s 2:23.626 from session 1. Rockstar Energy Husqvarna teammates Jason Anderson (2:23.959) and Christophe Pourcel (2:24.117) followed closely behind. Ken Roczen, who entered the weekend 5 points back of Barcia for second, qualified seventh.

If practice is any indication, the 250MX title fight is going to be close between Jeremy Martin and Marvin Musquin. The Bud Light fastest qualifier went to Martin with a 2:23.884, but Musquin was hot on his tail with a 2:24.314. In the first session, they posted similar times with Musquin dropping a 2:24.515 to Martin’s 2:24.955. Strap in, folks, this is going to get good.

MAVTV will carry the first motos live at 1 p.m. ET. NBCSN will air the second motos  at 11 p.m. ET. The second motos will also be streamed live on Racer X Online and ProMotocross.com at 3 p.m. ET. In addition, the Legends Race will be streamed live at 12:30 p.m. on Racer X Online and ProMotocross.com. The order is switched this week, with the 450 Class kicking things off at 1:00 pm.

Welcome to a chilly, but more importantly, clear, Ironman Raceway, site of Round 12 of Lucas Oil Pro Motocross. Last season, the facility located in the small town of Crawfordsville, Indiana, an hour west of Indianapolis, was hit with heavy rain the morning of the event, leading to one of the toughest, muddest tracks of the season. It was also site of Jeremy Martin’s first career 250MX championship, as the Minnesota native clinched a round early in 2014. This year, the storylines, are, shall we say, much different.

Martin enters this weekend just 2 points clear of Red Bull KTM’s Marvin Musquin after the two split moto wins a week ago in Utah. This championship battle has been on of the closest in recent memory, as the biggest points lead reached this season is just 19 (both held leads of this size). Martin has held the red plate for five straight rounds, and seven overall, but has mostly had to do it from the back recently, averaging a 11.5 start (after lap one) compared to a 5.25 start for Musquin, since Unadilla. We covered the championship chase intensively earlier this week in 10 Things to Watch, which you can check out here.

In 450MX, Red Bull KTM’s Ryan Dungey clinched his third career Lucas Oil Pro Motocross 450 title a week ago at Miller Motorsports Park in Utah. It’s been a dominating season for Dungey, as he’s won five straight motos and eight of the last ten. Although Dungey has clinched, there is still plenty up for grabs this weekend as Justin Barcia leads Ken Roczen by 5 for second in points entering the weekend. This week has featured plenty of storylines away from the track in regards to Roczen, and it will be interesting to see if he can put the off-track stuff behind and turn his focus on-track. It’s been quite some time since each won a moto (Washougal for Barcia; High Point for Roczen), but it would go a long way today.

This weekend will mark just the third event the facility has ever hosted—last year’s Lucas Oil Pro Motocross Championship and a Loretta Lynn Regional Qualifier—so questions arising of which rider the track may favor are generally meet with assumptions. An estimated 3,000 truckloads of organic material mix and sand was brought in to construct the track, and judging from amateur day a year ago, the sand that was mixed in should lead to rough conditions that should form multiple lines and choppy braking bumps.

Also on tap today is the Legends Race, featuring the likes of Ricky Carmichael, Kevin Windham, Tim Ferry, Guy Cooper, Jeff Emig, and many more taking place before the start of the motos. The Legends will have a second practice this morning (first practice took place Friday) before kicking off the four-lap race at 12:30 Eastern. You can watch the Legends battle live on ProMotocross.com.