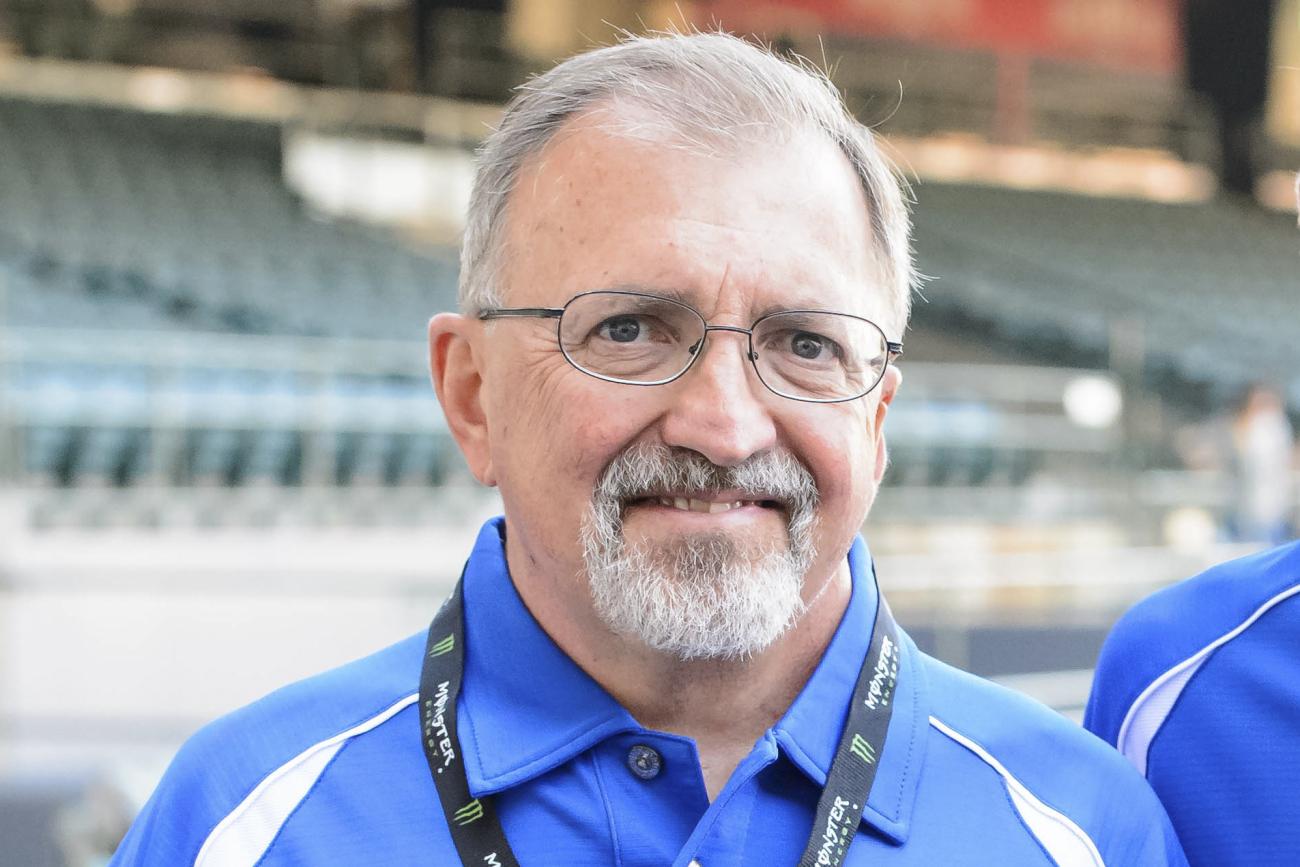 Keith McCarty is an American motocross legend. He has been with Yamaha since 1977, before Yamahas were blue, or even white. He worked with Bob Hannah way back at the beginning, and now he helps oversee all of Yamaha’s domestic racing.

This Saturday in Indiana, Yamalube/Star Racing Yamaha-backed Jeremy Martin will battle against Red Bull KTM’s Marvin Musquin in an effort to defend his AMA 250 Motocross National Championship, and then in a little over a month, three Yamaha riders—Justin Barcia, Cooper Webb, and Martin—will take on the rest of the world at the 2015 Motocross of Nations at Ernee, France. This marks the first time in Team USA history that the entire team was mounted on Yamaha motorcycles.

With all he has going on at the moment, we thought it a great time to check in with the man who will be inducted into the AMA Motorcycle Hall of Fame this October.

Racer X: Keith, I know you’re a busy man; thanks for taking the time to do this. How do you feel about the big finale in Indiana this weekend, and how do you feel about your chances with your guys?
Keith McCarty: I feel very good. This last weekend’s display of strength and determination by Jeremy at Salt Lake City was pretty amazing to me because the conditions were as tough as they’ve ever been, and that was coupled with the bad start Jeremy had. He showed how much strength and determination he really has by going from last to third in the first race. He then came back with a good start in moto two and went by everybody for the win. If you’re going to peak in a series, this is the time to do it, and he pretty much showed them he’s ready to go.

As we all know, Cooper and Jeremy, despite being teammates, have been extremely competitive with one another, and there has been some tension at times. However, at Salt Lake, especially in the second moto, it appeared that they were both out to try and win the 250 title for Yamaha.
Yeah, I kind of feel the same way. I think it was a milestone for Cooper. I think if you’re a rider, there’s a lot of times where you want to beat the guys on your team; you want to be the first on your team. My sense was that there was a huge amount of respect for what Jeremy did with the races that he had over the weekend. That doesn’t take anything away from Cooper. As far as abilities and determination, they’re both fantastic riders, and we’re lucky to have them both on the team. I felt really, really good about the team and the dynamics and everything that went on in Utah. It meant a lot to me to see that. It’s rare to have two thoroughbreds in the same corral, if you will, and they both have a chance to win. That’s pretty awesome.

During the second and final moto at Utah, Jeremy came charging up on Cooper, and, well, if you were there or watching on television, Cooper didn’t put up very much resistance to his teammate.
Yeah, there’s always the speculation based on these teams being close, but the bottom line is that Jeremy came from a ways back and caught him, and I don’t think there was any kind of shenanigans going on there. I think Jeremy rode a great race and Cooper settled. Cooper had two great rides for the weekend and he advanced himself in the series a little bit after the injuries he had early on. I think it was a respectful ride.

What’s it going to take you guys to defeat Marvin Musquin on Saturday?
I think our problem is just executing what we do, not what he does. I think both our guys showed a lot of heart out there and a lot determination out there in Utah, and we’ll go to Indiana with that same game plan. If we do that, it will take care of itself. It’s pretty simple—go win.

Okay, I have to ask the question: Going back to the 1977 125cc National Championship finale at Cyclerama in San Antonio, Texas, you were put in a position to signal your rider, Bob Hannah, to move over and let his Yamaha teammate Broc Glover go by and win the title over Team Suzuki’s Danny LaPorte. Does the “Let Brock Bye” incident still ever bother you at all?
Yeah, absolutely it bothers me. It bothered me that we had to do it. Maybe the way we did it, it could have been better. It was very disappointing because there were opportunities to not make it a public deal like it was. I know it was hurtful to Bob and hurtful to Broc, and it hurt a lot of people because it was public. You know, there is a lot of investment these people and these companies make in this and it was tough. It was a tough time. At the end of the day, it is what it is. And it’s part of history now, isn’t it? There’s no taking it back. If we had to do it all over again, I’m sure we would have, but in a different way.

On the brighter side, you and Yamaha will be sending three guys—Justin Barcia, Jeremy Martin, and Cooper Webb—out to compete at the Motocross of Nations in France next month. What do you think about that?
Well, you know, I remember me and you doing this interview a few years back, and I think I told you that it would be nice to get things back on track and have Yamaha have some of its glory back like the old days. Certainly having three Yamaha riders represent Team USA is certainly something to be proud of. I know Justin has been working really hard, and Cooper and Jeremy have both been displaying their talents in the last couple of years. And the YZs themselves have continued to improve and be the bikes to have in terms of racing. I couldn’t be prouder for the company, the riders, and the teams. You know JGR has been doing a great job getting Justin back going again, and Star Racing Yamaha just continues their domination of the Lites class. I couldn’t be happier.

Justin Barcia and JGR really came on strong this summer. What do you attribute that to?
I don’t know if it’s any one thing. Certainly, we’ve been working closer together, and I’m hoping that’s paying some dividends. It’s usually about the rider being comfortable and getting what he needs. Justin was able to let us all know what he was looking for and changes were being made, and we came across something that suited him really well, and the team responded and we did our part in this process, and all in all it really came out good and the rewards were the kid has been on the podium for five races in a row. That’s really good and I’m hoping we can carry this momentum through the last national, through the des Nations, and into the next year.

You’ve been at this a long time. Are you going to be a nervous man on the side of the track on Saturday?
I’m not going to be nervous. I think that the work has been done and I’m very confident in our guys and I’m going to be really excited to see what the outcome is, just like everybody else. I really would like to see Jeremy nail down his second championship. That would be terrific for the Star Yamaha Racing team as well. I’m not nervous about it because I know they’ve worked really hard and they’ve done everything they need to do.

There has been some talk of Yamaha having a 450 factory team in 2016. Is that anything you can speak to?
I think we’ll leave that for a later discussion. I’ve heard the same things, and there are a lot of people that would really like us to do it. There’s no question. We’ll see what the future brings a little later. We’ll get through these next few races here, and then we’ll have time to talk about that.

And Chad Reed racing a Yamaha in 2016—is that another discussion, too?
Well, I’ve heard that, too. And Chad has been very vocal about it, and it’s not just a rumor. I think one of the great times in his racing career was the when he rode Yamahas, even from the Yamaha of Troy days when he rode the 250. He’s had a lot of success on Yamahas. He’s in the maturity of his career, and I know that typically guys can look at the bright spots in their careers and try to get back there. We’ll see what the future holds. It’s all good stuff for us, too, but you know we want to take care of first things first and not jump too far ahead.

When you guys ran the classic yellow and black Yamaha bikes and gear at Unadilla, I couldn’t help but think about watching Keith McCarty and Bob Hannah at the Trans-AMA in 1978. As a kid, I was at a few of those races. When you look at that retro stuff, does it bring back memories? Man alive, it sure does for me.
Yeah, absolutely. Those are the greatest times of my life—and not just for me. In that interview we did a while back, I talked about Rick Burgett and Broc Glover and Mike Bell and Pierre Karsmakers and Bob—all those guys. That was a very special time. There was a lot of camaraderie and a lot of things changing. The industry and the motorcycles were changing, and relationships were being made. It was a period of time—not just one year, that’s for sure. It was a very special time for me, as you know. I wish I had a pair of those JT overalls and the yellow Yamaha pullover polo shirt I probably would have been wearing that year to celebrate that time. It’s hard to imagine that much time has gone by with Yamaha, but they were all really good and special times.