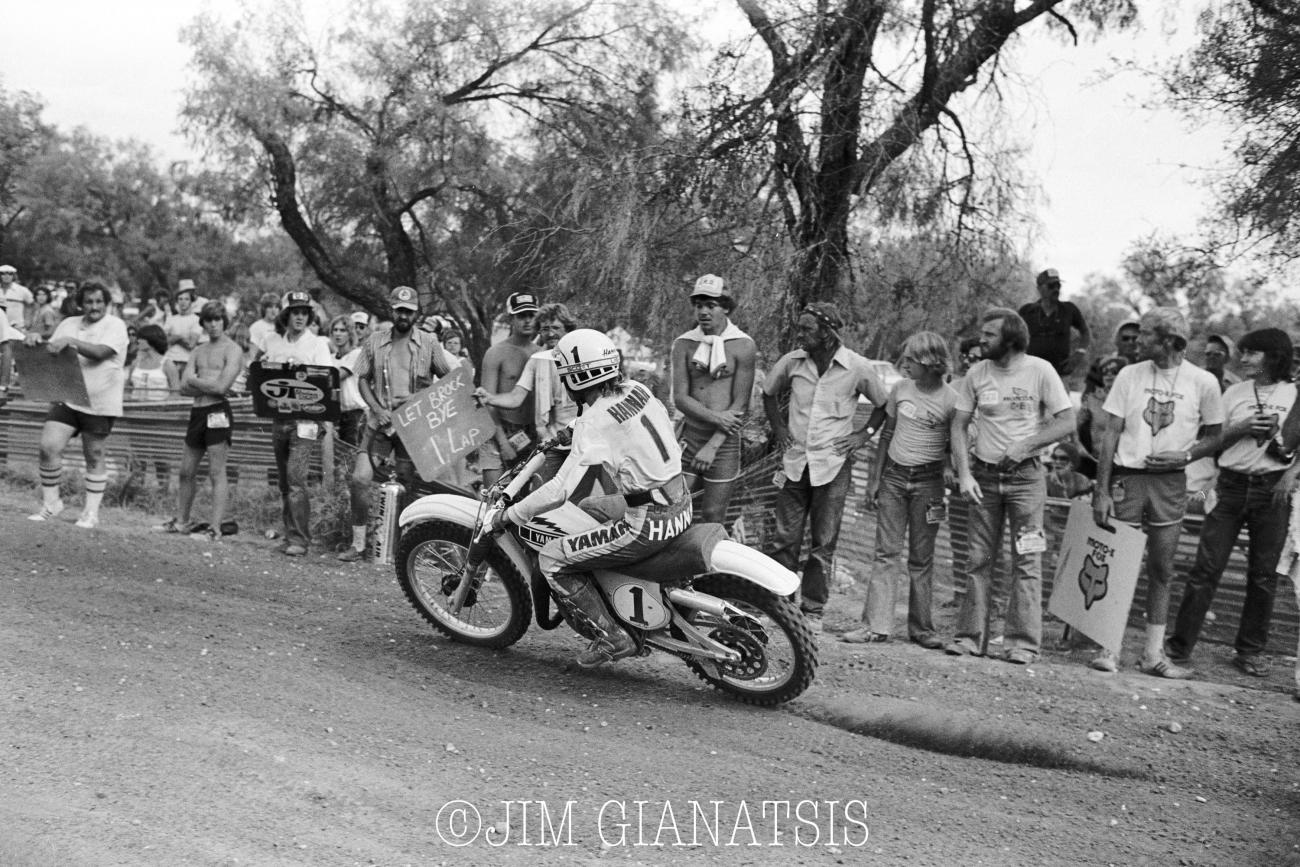 With Yamaha riders Jeremy Martin and Cooper Webb in the thick of a title fight with KTM’s Marvin Musquin—2 points separate Martin and Musquin going into the final round—questions have arisen about whether or not the Yamalube/Star Racing Yamaha teammates are working together. It’s not without precedence, as nearly forty years ago one of the most notorious moments in American motocross history went down at the final race of the 1977 AMA 125 National Championship. This was the legendary "Let Brock Bye" controversy from the Cycle Rama track in San Antonio, Texas. For this week’s List, we thought we would revisit the race with the help of one of the two men who captured the moment that team orders went into play, then-Cycle News photo journalist Jim “the Greek” Gianatsis. Here’s his take, told in nine photos that captured the mood of that day.

It was the most exciting and controversial finish to a championship in AMA Pro Motocross history. It was a finish that both race fans that day at the 1977 AMA 125cc National Championship season finale at Cycle Rama in San Antonio, Texas, and we in the media almost didn't realize what had happened until days later, when we got back to our offices and processed the film and saw what developed in one frame of the negatives, and the story was published in Cycle News.

My good friend Jody Weisel, then editor of Cycle News, and myself, once also a staff and now contributing editor, were covering the 125cc National MX final at San Antonio for all three editions of Cycle News at the time: East, Central, and West. This required three sets of film be shot and shipped overnight on Sunday to all three offices across the country for Tuesday publication. Near the end of the race, we both happened to be standing next to each other, across from the race finish line/mechanic's signaling area on the next-to-last lap. We both took almost the exact same shot of mechanic Keith McCarty flashing his now legendary pit board signal to race leader Bob Hannah.

I was so intent on panning my camera on Hannah as he came past the mechanic's area that I never actually saw what Keith's pit board said—at least not until days later when I saw the processed proof sheet. The pit board perfectly framed in front of Bob, there it was: "Let Brock Bye." Three words, two mistakes, and one of the most famous photos in American Motocross history. It was a controversial team order from the higher-ups at Yamaha, which changed the course of an AMA National Motocross Championship title on the final lap of the race.

Bob "Hurricane" Hannah (the nickname I had given him the year before in my Cycle News coverage when he emerged on the national motocross scene in 1976 with also-new Yamaha teammate Rick "Lumberjack" Burgett during the Florida Winter-AMA Series) was the biggest star in motocross by 1977, competing in all three 125cc, 250cc, and 500cc National Motocross Championships for Yamaha. Bob would win races in all three classes that year, but it would prove to be a little too ambitious for taking or retaining any of the championships. Hannah was the defending AMA 125 National Motocross Champion, and Yamaha certainly wanted Hannah to again focus on the 125cc National Class in 1977, but this didn't please the ambitious hero who wanted to move up to the bigger bikes. Bob DNF'd the first 125cc round that year at Hangtown, with the race win going to his good buddy, Suzuki's Danny LaPorte. Bob then came back to win three of the next four rounds of the six-race tour, including the super-rough Keithsburg, Illinois, sand race. But that mechanical breakdown at Hangtown had proved costly, and Bob was too far back in the points at the final round to challenge LaPorte for the title, though his teammate Broc Glover could. So for the final San Antonio round, Yamaha asked Hannah to help Glover win the title.

Bob took off right from the start and was dominating the race with a big lead over Glover, followed by LaPorte about eight seconds further back. On the last lap, Hannah's mechanic Keith McCarty was told to write “let Broc by” on Hannah's chalkboard. Bob saw the instructions, hastily chalked out by McCarty, slowed down on the back section of the track where no one could see him to let Broc pass, then followed Broc across the finish line in second place just ahead of his good buddy LaPorte. Glover tied LaPorte on points at 240 apiece, but was awarded the 125cc National title based on the fact that he had two race wins—Rio Bravo and now San Antonio in Texas—to Danny's one race win at Hangtown.

Included here are my never-before-seen photos of Danny LaPorte and Broc Glover, flanked by Mark Barnett—all AMA Motorcycle Hall of Famers now—sharing words as they cool down back in the pits at the finish down of the controversial race. While both Broc and Danny were at least talking to each other after the race as I took these photos, there were no congratulations or handshakes going on either. Though Broc did slip me the "Number 1" finger signal for my camera when he did bend down to drink water from a hose, but neither Danny nor anyone else could see it. (And to his credit, Glover would go on to win five more AMA championships on his own, making him one of the greatest American motocross racers of all time.)

Bob Hannah, meanwhile, was nowhere to be seen here. At the end of the race, after being ordered to relinquish the race lead to Broc, he simply disappeared. Bob later revealed that he had ridden off into the woods after finishing the race, threw his bike down, and steamed in anger by himself for the next half-hour before finally retuning to the pits, this after we in the media had all left to file our stories. All we knew at the time was that Yamaha had retained the 125cc championship title over Suzuki's LaPorte, who was running the race in third place and a leading the points into the day's final moto.

Later, when Jody and I developed our film from the race, the complete story became known on film in Kodak Tri-X Black & White.