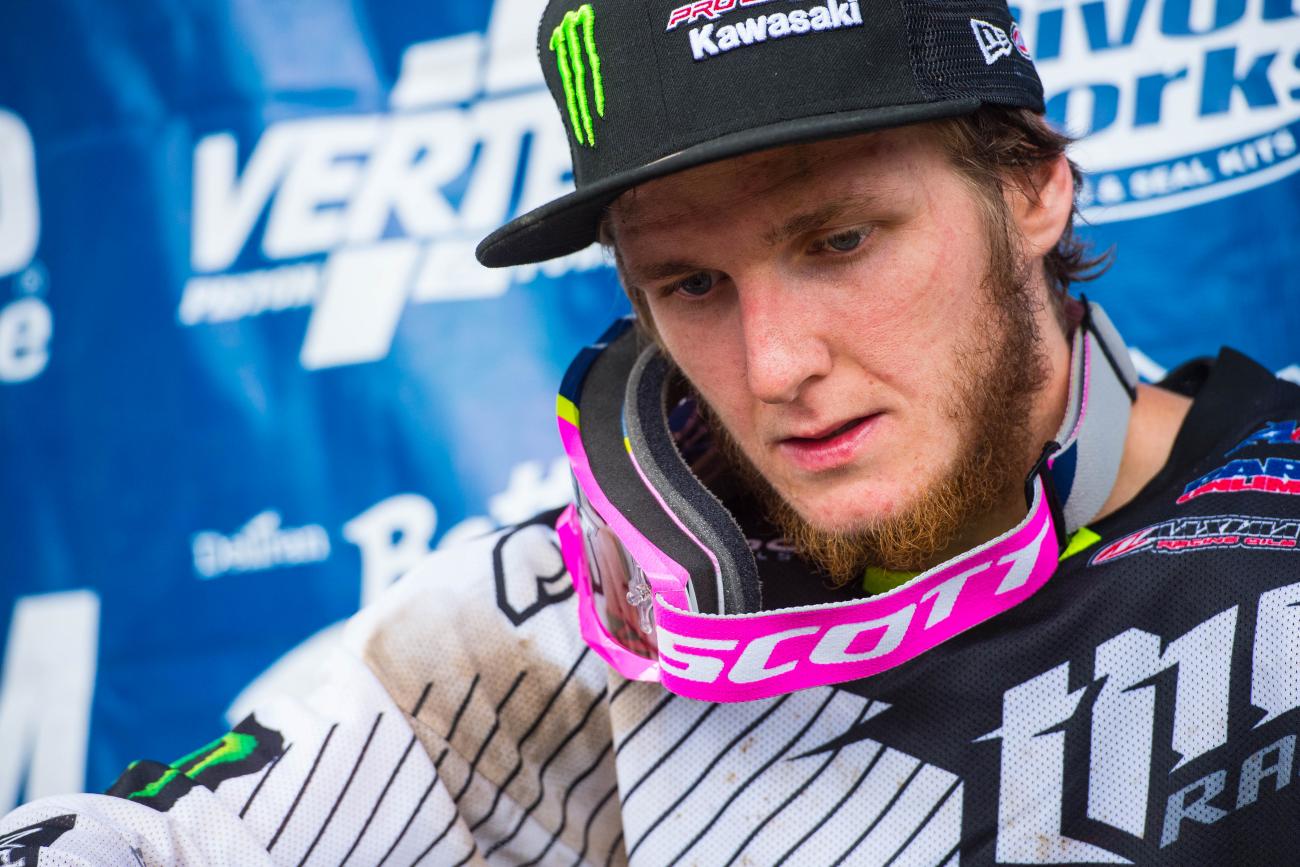 3 on 3 Questions for Indiana

1. Got any problems with Cooper Webb moving over—wait, sorry, stalling, in front of Jeremy Martin?

Jason Weigandt: I don't have a problem with it, but I was surprised to see it. Knowing Webb's personality, I didn't picture him helping anyone, and he even said recently on DMXS Radio that he "wouldn't move over for his own dad." Sorry, Bobby Webb! It's fine, though. Yamaha dudes trying to take Musquin out would be one thing, but making it easy for Martin to pass—especially when he was clearly fast enough to have eventually made the move anyway—is the least controversial team tactic. Star Racing owner Bobby Reagan said they haven't had team meetings but did tell the riders to sort it out among themselves. Clearly, Cooper and Jeremy don't have the friction that we thought. This will help if Martin gets a bad start and needs to make quick passes.

Jason Thomas: No, I don't. Team tactics are nothing new. Everything from the "let broc bye" board to Larry Brooks removing Steve Boniface's front wheel and keeping him out of a moto because he refused to help his teammate has occurred in this sport and will continue to. This was one of the less blatant instances in my opinion because I feel that Martin was going to pass Webb regardless. Teams are all working toward one goal, and if they can help one another without crossing the line, so be it. The real misfortune is that Musquin doesn't have anyone to even the odds, especially with Justin Hill's injury.

Steve Matthes: I don't have an issue with what Webb did or the even worse move, in my opinion, of Aaron Plessinger basically grabbing his brakes when Martin was coming up. We know Martin would've gotten Plessinger anyway, but it was pretty blatant. I'm cool with it though. This is why you go and spend the money on multiple riders and field a big team—to have as many riders that can help you, whether it's results or letting a guy by at the end of the title fight. As long as they're not jacking around with Marvin, I'm cool with them helping Jeremy.

I guess if I had to nitpick, I hadn't heard what Webb said on DMXS, but I did hear Webb say he "stalled" his bike, and that’s why Jeremy got by. Just come out and admit that you made it easy for Jeremy to get by. Let's cut the crap.

Weigandt: It does work better for Musquin than Utah, but I'm not sure if it works better for him than Martin. We're all guessing here because last year's Ironman National was a mudder, but everyone talks about this being like RedBud. Martin has won the RedBud overall the last two years. But I'm not so sure. The Ritchie family has trucked in so much sand to RedBud that it's nearly a sand track in spots, which works for Martin. I think Ironman Raceway might have a similar vibe, but the soil won't be as sandy. This tips things back toward Marvin. So don't just hand this title to Martin because he tracked down Musquin in Utah's second moto. This track will close the gap between the two.

Thomas: I think that’s a bit of an unknown at this point. No one has ever raced Indiana in dry conditions, so we’re guessing as to whom it will favor. Being in the Midwest, I think Martin will have the edge, but as I said, we will have to wait and see. To answer the specific question, though, yes, it should be better than Utah because Marvin has never seemed to excel there.

Matthes: Yeah, I'm with what Weege said. Marvin's going to be much faster at Indiana than he was at Utah, but Indiana just "seems" like a Jeremy track. But we don't have much to go on—that's for sure. Looking at the weather, it's predicted to be eighty degrees with some humidity, so that shouldn't matter much. Starts? Yeah, that's where Jeremy has to be better than he has been, and Marvin's got to stay away from Cooper Webb. I've written it before—I think Webb would get rough with Marvin if he had to. He's the ultimate wild card, and I have a feeling Cooper is going to decide this title one way or another.

3. Justin Barcia is 5 points ahead of Ken Roczen for second in 450MX, and Joey Savatgy leads Zach Osborne for third in the 250 Class by 5 points. How will these battles play out?

Weigandt: I think Savatgy has an edge on Osborne right now because he's hauling. He won Unadilla and might have been even faster at Utah while coming from way, way back. Zach's going to try super hard, but Joey has a ton of speed lately and 5 points on his side. That will be tough to overcome.

In the 450s, I'm worried for Barcia. After coulda shoulda woulda winning Washougal, his last four motos have been eerily similar to his early season stuff, where he could get starts, but couldn't match Dungey's pace and looked more like a third-to-fifth-place guy. Roczen's been better at the last two races. Barcia's 5 points could survive a 3-3 to a Roczen 2-2, but, as I like to say, racing rarely plays out so simply.

Thomas: I’m going to take the points here. I think that Savatgy will beat Zach this weekend and maintain his lead, simply because Joey has been riding incredibly well. Zach rode well in the second moto last week, but he hasn't had that elite speed every moto, so it's tough to bank on an exceptional weekend when he needs it most.

As for Roczen, I think he may beat Barcia, but I don't see him making up the 5 points needed. They have traded motos quite a bit lately, and even if Roczen beats him in both motos, it still may not be enough. Barcia will be better this weekend on dirt that suits him, and will do enough to keep the point gap intact.

Matthes: Go with the guys that have the momentum right now. Kenny Roczen has a spring in his fork and is much happier lately, so he's been better. Barcia's been fine, but he hasn't been as dynamic as he was earlier, so I like Kenny to pass Barcia in the points and maybe even win a moto this weekend. And Joey Savatgy is on fire right now—don't bother looking at his moto scores at Utah. He was amazing both motos in coming from way, way back. I don't know what's going on with Zacho right now—I thought "we" had figured out how to be consistent.