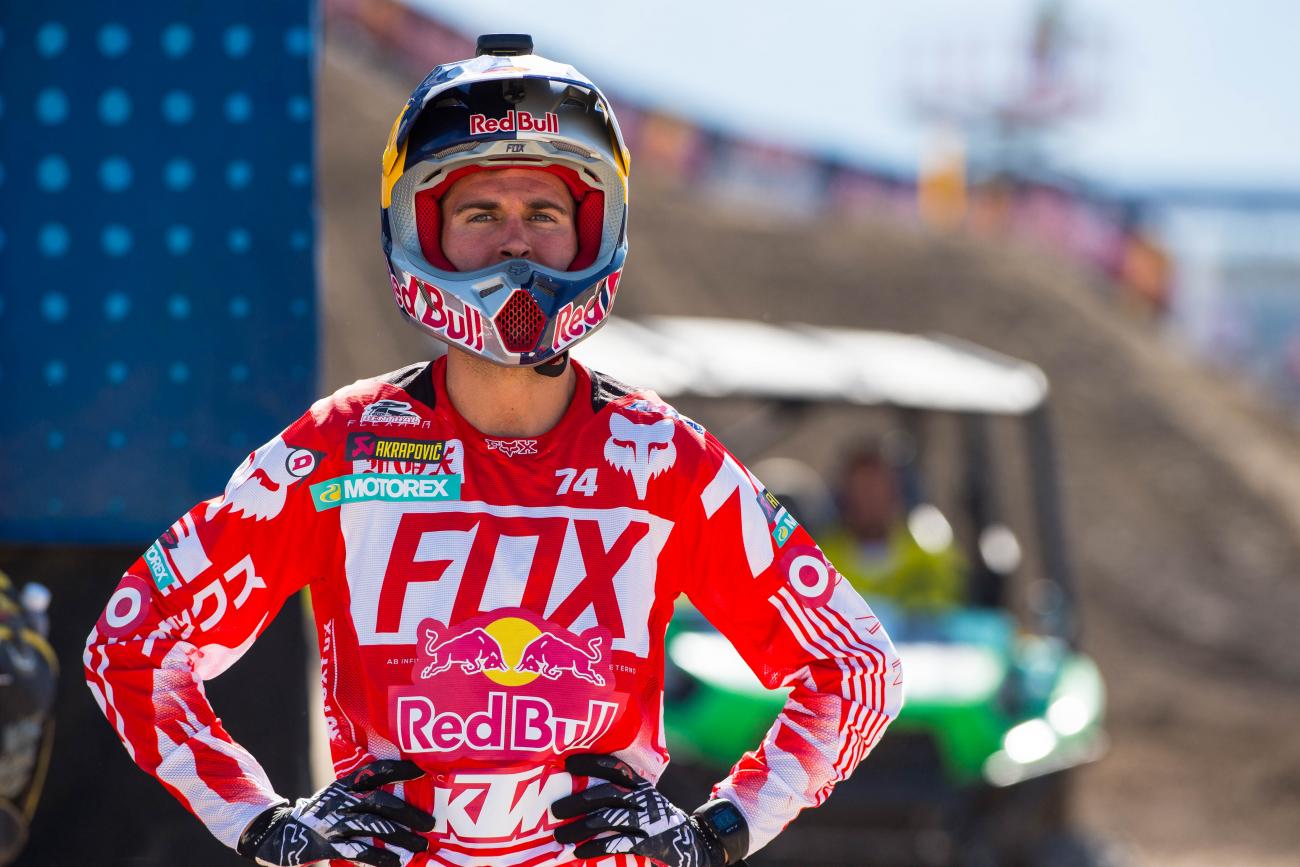 You’ve seen Ryan Dungey win races and titles before, but there’s something different about his attitude and approach this season. He seems more comfortable in his role as a leader of the sport, and after clinching the Lucas Oil Pro Motocross 450 National Championship on Saturday, he explained why. Enjoy this candid conversation with the once-again champion, and get ready to enjoy a lot more, because he’s far from done.

Racer X: Congratulations on an outstanding day! Is this the scenario you envisioned as a kid when you were dreaming about it all?
Ryan Dungey: Absolutely. Let alone making it to the pros in the first place, which was the first dream come true. To be a champion is a lot of hard work, a lot of effort, and a lot of years of preparation. You have to have a solid foundation and good group of people around you, from my wife, my family, and the team. Twenty-four motos, that’s a lot of racing, and one little hiccup can cost you a lot of points. Having a good mechanic is key, too. To be able to wrap up the supercross championship was awesome, but to get the national championship in the same year was awesome. The last time I did that was in 2010, and it was an awesome feeling, but this one is even more special. I really feel like we earned it, and we really pushed to be here. The addition of Aldon Baker was a big step forward, and the new bike was great too. There were a lot of good things, and there’s one race left, so we’re going to keep on it.

In moto one you found yourself in third. We thought you might get comfortable and settle in for the championship, but you kept pushing.
I wanted to ride within my means, but I was pushing it as best as I could. The opportunity to grab the championship was there, but the motos still needed to be raced. As much as you want the championship, you still have to do your job. My mentality coming into this weekend was to get off the gate good and get two solid moto wins. If we could do that in the first moto, the championship would be there, but I didn’t want to get caught off guard in the second one—I wanted to go out there and win that one too. It doesn’t look very good if you don’t. It looks like you’re slacking off. Every race and every win is important. We could have settled, but I saw [Justin] Barcia up there, and there was no way I was going to settle because if he got [Ken] Roczen, then I wouldn’t get the championship. We race to win. We collected another win today, and those are valuable.

Last year, this was the finale and Roczen edged you out, and there’re a lot of young guys coming up now too. You’ve been in the 450 Class for quite a while, so how hard is it to say, “You know what? My time at the top isn’t done. I can get better. I can come back and win the supercross title again. I can get the national championship again.” How hard was that to do?
It was definitely upsetting to lose last year, but there was something else that was upsetting me. There was something else. I couldn’t seem to find how to control myself or my thinking. I was struggling mentally. I started to get it together, but it was just a little bit too late last year. The biggest thing that fell into place was Aldon Baker. The bike was big too. With Roczen leaving [Baker], it allowed me to move down to Florida and become priority. If I had to look back at the changing point, it was probably when I went down to Florida in the second week of December to spend a week with Aldon. Before we were just doing long-distance training. Marvin [Musquin], [Adam] Cianciarulo, and El Hombre [Jason Anderson], they were all down there riding at his facility. Right then and there, when I was training in the gym, I realized I needed to be there hands on with Aldon. It was the best thing for me, and thankfully everything worked out and I moved there right after Dallas [supercross]. We had to find a house to buy and everything—it was a process. And the new bike was definitely a new step, an improvement, and even to this day the guys are getting things more dialed. There’s a lot of good potential to keep riding that.

When were you struggling mentally? At the races? During the race? During the week?
During the week. I was trying to do all the training stuff myself, and I was overthinking things and wearing myself out. Like on Sunday night I should just be relaxing and getting ready for the week, but I was always thinking, Okay, what should I do? Sprint? Moto? I was so confused, and being able to put my trust in Aldon and his program eliminated that doubt, which in turn brought confidence. I was able to gather my thoughts more clearly, and Aldon’s been a big help with that.

You’ve mentioned a couple times today you’d like to be a leader for this sport. Explain what you mean by that.
I’ve been in this position before—I think in 2010—and some people might say it came a little easier and I caught some lucky breaks and so forth, but regardless of all that, I was too young to really understand or take hold of the position I was in. So having a second chance to do this, I really want to make a difference and help, whether it’s on the track or having a say with the track or helping the crew or just being a good leader for the kids coming up or being a good ambassador and doing the time with the media—just fulfilling all my obligations as I should. I think a lot of guys don’t take advantage of that position. It’s all about them and when they’re going to be done. That’s all they care about. At a certain point you have to look out for yourself, but you need to look for opportunities to benefit the sport too.

You’re winning titles and you’re making a lot of money, but I’ve heard you’re a normal guy off the track. Do you ever buy anything crazy or celebrate your success?
I’m very blessed to be in a position to go out and race my dirt bike for a living and make good money doing it. Obviously, with results, our sport is performance based, so if you win races and championships, you’ll do better [making money]. But I don’t know, money is a tricky thing. A lot of young kids get in that position and they tend to learn how to use it in the wrong ways. It can go backward really fast like that. It was a struggle for me in the beginning; I didn’t know what to do. I mean, I won my first race. But to be able to be a blessing to others is good. My family and I have been able to do some great things, and ultimately it’ll be great to retire and enjoy it more. I’m not going out there blowing my money on things—that’s pointless. I have before on a few things, but that’s temporary happiness. Pretty soon you’re like, “Okay, what’s the next void to fill?” I don’t know how to describe that subject. I’m very fortunate to be able to be in this sport and to be making money doing it, but that’s not going to get in the way of achieving the results I want and accomplishing my goals.

What’s on that list of goals?
It’s nice to be in the position we’re in, winning both titles, but I’d like to back it up. No pressure right now, but there’ll be a new season soon and hopefully we’ll all be healthy. I’d like to back up my championship; that’s something I haven’t done yet. That’ll be my next goal and it motivates me. It doesn’t add pressure; every time I get out there I want to give it my best. My best is my best, and I’ll be happy with that like I always have been. It’d be great to win championships, and to keep winning races, too. Ultimately, when it’s all said and done, the goal is being satisfied with the effort that I’ve put out there.

You asked about the leadership role too, and that’s trying to do stuff for our sport. Obviously, with the TV packages, everything is getting better, and I think this year was a big step. And not to bring it up, but that ESPY Award—that’s some mainstream stuff. Not just for me, but for the whole sport, so for people to recognize that I think is important. Our sport is climbing; it’s getting better TV, and people are watching. If we can all keep doing our jobs like we are, the sport has a lot of potential. We have to keep an open mind.

Go back to the beginning of the motocross season. What were some of your early challenges?
Keeping myself under control and not losing it. There were multiple times where I would get frustrated, but that was the old me I couldn’t let show. Ultimately, I have to trust in the team—those guys do an awesome job. We only had two weeks coming into the Nationals, and I think if you watch the first race and today, we’re hands down better, for sure. There’s not a doubt in my mind. It was a new bike, and we had settings in supercross, but outdoors it was a whole different ballgame. We just didn’t have enough time to prepare. That’s no excuse, though, and I’m really happy with how things worked out in the end. We actually learned stuff we can apply in supercross next year. We’ve got a year under our belts, so next year we’re not going to get caught off guard. We caught maybe a good break with Eli [Tomac] crashing. He was strong and there’s no telling, but I don’t ever want to get caught in that position again. It wasn’t a matter of fitness or speed; I was just fighting the bike a lot. That guy’s a contender, and I want to be able to battle with him and beat him for wins, and he just left us. I don’t want to let that happen again.

We all know you as this mild-mannered guy, but you’re saying behind the scenes you would get fired up? That happens?
Yeah, the old me, but Aldon’s helped me out a lot with that. There were a lot of things. I almost lost it a few times, but that shows weakness. I’m learning a lot, and I want to continue to learn and not act like that. I have to control myself.