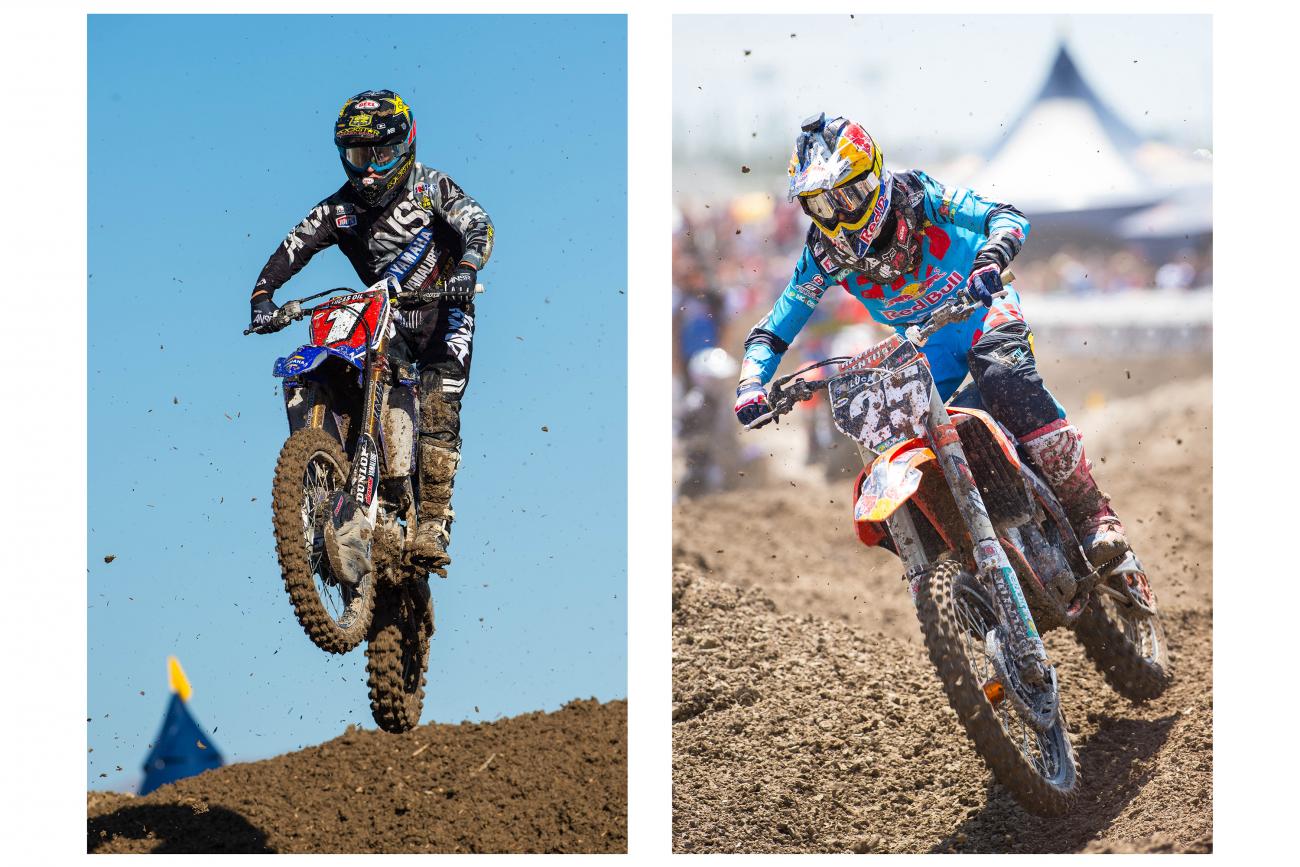 Saturday’s Zions Bank Utah National at Miller Motorsports Park summed up this crazy 250 championship season pretty well. We saw mistakes, speed, spoilers, and drama. At this particular track, Jeremy Martin had an edge, but a mistake in the first moto set him back to almost last, and he barely pulled out a third. Meanwhile, title rival Marvin Musquin won the moto after a duel with Cooper Webb. In moto two, Martin holeshot, then the race was red-flagged. He started about fifth on the restart but worked his way past Marvin and Webb to take the moto win. Net result: 3-1 for Martin (and the overall win) and a 1-3 for Musquin means they tied on points for the day. Martin will hold a two-point lead heading into the finale Saturday in Indiana. Here’s Martin and Musquin talking about their day in Utah.

Racer X: Congratulations on the day and a pair of very spirited rides! Take us through it.
Jeremy Martin: The day started out really good; I was the fastest qualifier in both sessions. The bike setup was on point today, and I felt good going into moto one. I saw the very inside gate, and you could tell the tiller had missed a certain spot. I was like, “Yeah, this is going to be my gate; this is going to get me a holeshot.” But I just didn’t quite get the jump and I got pinched off. I was just like, “Dude, you have to make it up there.” I did everything I could, and on the last lap I got a gift from RJ Hampshire that gave me third. In moto two, I knew I had to throw it down and get a good start, which I did, but then the red flag came out. I was like, “You gotta be kidding me!” But then I got a top-five start and I saw Marvin [Musquin] and Cooper [Webb] up front, and I was like, “You have to beat that KTM.” I was able to get up on him and make the move, and it was nice to get a win like that. And an overall—I haven’t had an overall in a while. It was a good day for Star Racing.

We saw you and Cooper with a little fist bump after the race. Want to let us in on that?
Yeah, he was nice out there. He saw me come up on him, and he just let me take it and he filed in behind me. I was thankful for that. It’s getting down to the wire and I respect that.

Was there a team plan in place in case a situation like that came up? Did you guys talk about it at the rig?
There wasn’t a team plan or anything, and there never has been. He’s won a championship before, and he knows what it’s like. It’s really tight between Marvin and I. I have a ton of respect for Cooper, and I think he has a ton of respect for me. He was just being nice.

What went through your mind when you came around and saw RJ Hampshire down at the end of that first moto?
Well, I saw him down and I thought it was a GEICO rider in third there, and I came around and I was like, “Is that him?” I didn’t know if he was third or not, but knew I was in fourth, so I thought it had to be him. No one was waving me over to the podium or anything like that, and I was trying to really make sure I was looking at the guy who tells me, and he was like, “Hey, you got third.” I was almost off the track and ready to get back to the pits! I was pretty pumped to be able to get third—it put me in a position to get the overall.

What were you thinking when you saw the red flag?
I wasn’t happy when I saw the red flag. No one is when they get a holeshot and are leading the race! But safety is important and we had a rider down, and that was the most important thing. So we had to tend to him and we lined back up. I was like, “Hey, you have to do it again.” This is what I train during the week for. I practice starts to be able to put myself in a position to continuously get good starts and good results. With that being said, I knew I just had to get ‘er done.

Did you feel like you used up a ton of energy in coming through the pack in the first moto, then having to restart in the second?
Today wasn’t easy on the body. Coming from almost fortieth in the first moto, that wasn’t easy, so I was hurting a little bit lining up for moto two. But I knew if I was hurting, everyone else was hurting that much more. I’m in phenomenal shape thanks to Johnny O’Mara—the best shape of my life—and I know how to suffer. Everyone was hot, everyone felt like they were boiling, and you just suffer through it.

Racer X: You had to battle pretty hard today; take us through it.
Marvin Musquin: First of all, that’s not a track I really like. Two years ago, I think, it was a struggle. It’s hot and really rough, but I was hoping for a good day obviously. That first moto felt really good too. I was battling with Cooper Webb and he went down, so he made it easy on me and I won the first moto. Second moto, we got a restart, and I started in first gear on that second start and got the holeshot. But the two Yamaha guys [Jeremy Martin and Webb], I’m not going to lie, they were faster than me and they got around me. Jeremy was doing really good, so to leave Utah with the same point gap is actually really good.

What mindset are you in going into next week?
I only raced there when it was muddy, but it looks like a fun track with nice jumps, and it seems technical. So I’m obviously more confident than I was coming to this race here today. Any track, you have to be doing good and trying your best. Today was really tough, but Indiana is a better track, and it’s going to be really interesting for all the fans. I’m excited. It’s going to be a day we’ll never forget. No matter what happens, it’ll be a special day. I have a great team behind me and everybody works so hard, and I’m going to do my best to win and try to get the championship.

Do you worry about team tactics at all?
It’s good to mention that. It’s been a couple races where I’ve battled with Cooper, and I didn’t feel there were team tactics before, but now, maybe yes. I don’t know if Cooper made a mistake in that second moto, but it looked like he let Martin pass. Martin was faster and would have gotten around anyway though. But in that first moto, [Aaron] Plessinger saw me coming and he was in his line, and he just jumped out of his line to cut inside of me. Obviously I got around him, but I think when they see the KTM coming they try harder, and to hold me up. But that’s the way it is—it’s racing. Last weekend at Unadilla, Jessy Nelson fought really hard to stay in front of Jeremy, so I feel like he was maybe thinking of me. I’m not sure—they might talk to Cooper for the last round, but my tactic is to just do my best like I do every weekend and be smart. You never know what might happen. We’ve had some battles with Cooper, and yeah, I closed the door on him, and maybe a few times it was a bit sketchy, but he’s never gone down because of me. Cooper is a special guy [laughs], and once again on the starting line he was talking to me. I couldn’t really hear what he was saying to me, but he was trying to mess with my head right before the start. We’ll see.

The championship has been going back and forth with you two, and it seems no matter what happens, neither one you can get a solid edge on each other.
Yeah, like at Unadilla, I won the first moto and he won the second, and I only gained 2 points. It looks like he’s not consistent on his starts, so you never know what’s going to happen. All those guys are doing their best to get holeshots and win races, and me and Jeremy are also trying our best. I feel like maybe last year Jeremy was maybe more consistent in going 1-1, but this year I feel like everybody got better and faster. And last year here at Utah he was better, going 1-1, but this year he didn’t get a good start in the first moto. I just want to get good starts and see what happens.