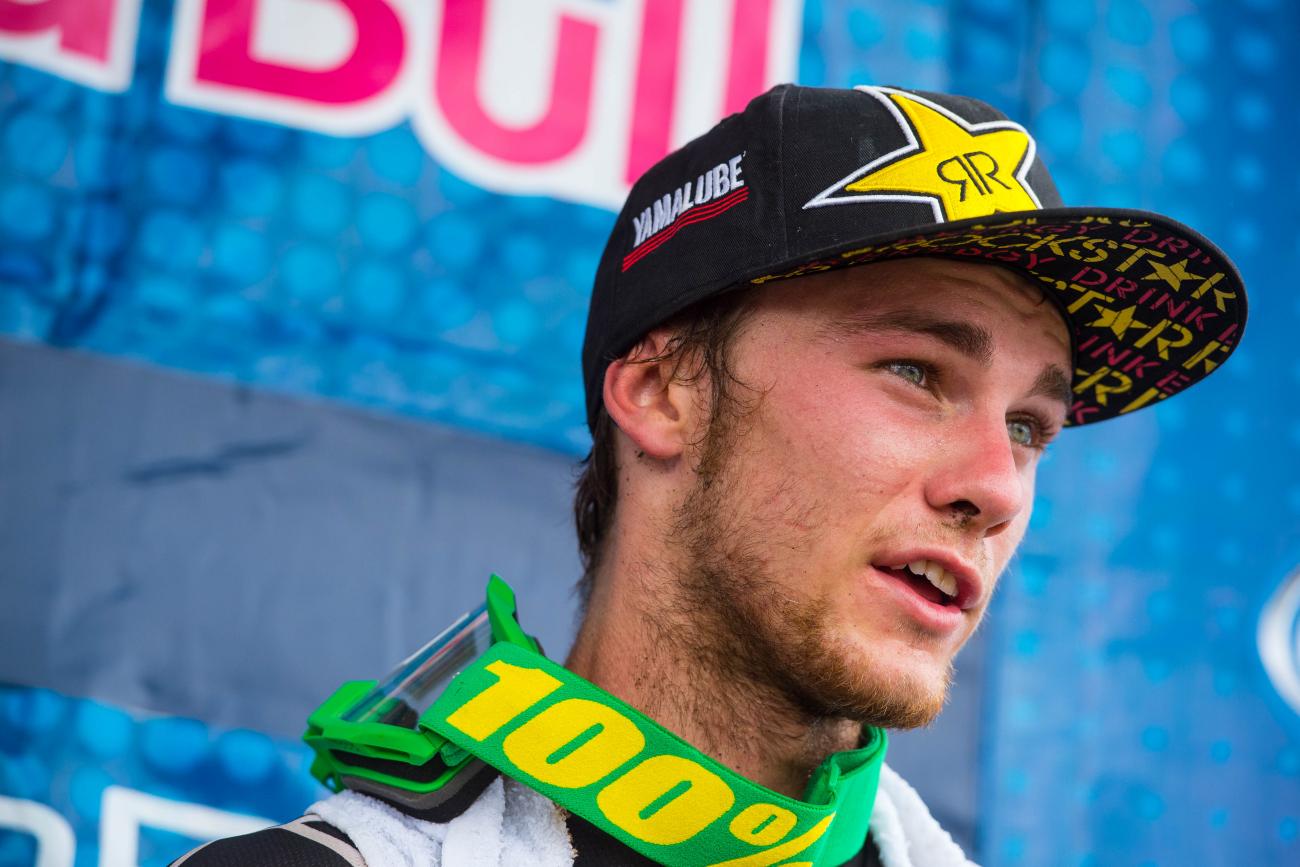 With two rounds to go, there are only two guys who can still steal the 450 Lucas Oil Pro Motocross Championship from Ryan Dungey—Justin Barcia and Ken Roczen. Of course, with Dungey’s gigantic 79-point lead, that’s about as likely as James Stewart inviting top WADA officials to his house for a dinner party. Dungey doesn’t even have to beat Barcia or Roczen either; he just has to not lose more than 30 points to Barcia or 43 points to Roczen and the title is his. In fact, as long as he doesn’t give up 5 points to Barcia or 18 points to Roczen in the first moto, he’ll wrap it up before the day is even over. If that’s too much math for you, just remember that a second place or better in the first moto for Dungey guarantees the title no matter what. –Aaron Hansel

Unless Marvin Musquin oversleeps his alarm and misses the race, the 250 Lucas Oil Pro Motocross Championship isn’t getting wrapped up early. Jeremy Martin and Musquin have gone back and forth all season, and last week at Unadilla was no exception—the points even swung back and forth from moto to moto! Martin now leads Musquin by just 2 points, which makes the Utah National crucial. If either racer is able to get some insurance points this weekend, he won’t have to worry about pinning it to beat the other guy at the finale in Indiana. Expect Musquin and Martin to be going for it in Utah. –Hansel

Joey Savatgy finally busted through for a win with 2-2 moto scores last week. It was Monster Energy/Pro Circuit Kawasaki’s first win this year. But, with no disrespect whatsoever to Savatgy’s outstanding win, the undesirable streak still isn’t completely over—the team has yet to secure a moto win this summer. We’ll see if a red-hot Savatgy can put a fat PC stamp in that category as well. –Hansel

It doesn’t really seem to matter what happens to Trey Canard—every time he gets injured it seems like he gets back to race pace almost immediately. In just his second race back, last Saturday, he ended up third overall with a third in the first moto. That’s incredible! Now, with the series heading to the Utah National, a round Canard dominated last year, it wouldn’t be shocking to see the Honda rider get his first win of the season. –Hansel

It hasn’t been the greatest year for defending champ Ken Roczen, who came into the season injured and, despite not using the injury as an excuse, just hasn’t seemed to be himself all season. But, after going down hard on the start of the first moto, Roczen showed he’s still got some fight in him by dogging Dungey in the second moto and nearly putting a pass on him for the win on the final lap. He even logged the fastest lap of the day. He likely won’t have the #1 plate for much longer, but that doesn’t mean he doesn’t want to win races. Look for some more fight from the champ in Utah. -Hansel

Opinions varied on the success of the return of Justin Bogle and Dean Wilson last weekend. Fitness played a part in each riders return, with Wilson telling Racer X’s Steve Matthes after the race that the “parachute came out pretty heavy in the first moto.” A crash early in the second moto hurt Bogle’s chances at a top-ten overall, but he feels he’s prepared going into the weekend. "I'm about as prepared as I can be at this point,” he said in a team statement. “This is definitely the 'Big Boy' class, and you've got the best riders in the world going at it every lap, but when you think about it we're all still riding dirt bikes." How will each do in his second race back? – Chase Stallo

Not for either title, as that distinction will likely belong to Ryan Dungey (450MX) and either Jeremy Martin or Marvin Musquin (250MX). In his Staging Area column earlier today, Jason Thomas said he was most looking forward to how the “Webb/Martin/Musquin love triangle plays out.” I can’t say I disagree. Since his return at Budds Creek, Webb has been a major factor in the championship. Whether by stealing moto wins or pestering Musquin, Webb will be a key cog in the championship down the stretch. It will be interesting to see what his role will be this weekend. –Stallo

After a rather unanticipated inaugural season in Monster Energy Supercross, Aaron Plessinger has been a consistent top-ten threat outdoors—fifteen in twenty motos. (The next closest rookie is Chris Alldredge with eleven. RJ Hampshire and Jordon Smith have nine and seven, respectively.) Consistency is a key to any rookie season; there was no reason to become worrisome over Plessinger’s results. Yet, for as good as he had been, he hadn’t reached the podium. That’s all changed over the last three weeks, as the former GNCC race winner battled through the slop at Washougal for an overall podium (albeit via 5-4 scores). With most of the focus last week on Webb’s late crash and Joey Savatgy’s first overall win, Plessinger managed to go mostly unnoticed in third in the second moto—his first moto podium outdoors. Plessinger joined teammates Jeremy Martin and Webb with podiums this year—Monster Energy/Pro Circuit Kawasaki is the only other team with three  or more different moto-podium performers (Adam Cianciarulo, Alldredge, Savatgy, Arnaud Tonus). Plessinger has adapted quickly in his first year; can he keep the momentum going this weekend? –Stallo

Most of the focus will center on the Martin/Musquin championship fight this weekend—as it should. But there are other tight championship battles to keep an eye on as well. Third in 250MX is still up for grabs, as Savatgy, on the heels of his overall win, leads Zach Osborne by 7 entering the weekend. Jessy Nelson, who has bounced back from a mid-season lull, is mathematically still alive 18 points back but will probably need some help.

In 450MX, the top three are set with Dungey, Justin Barcia and Roczen. Fourth is also probably set, as Blake Baggett leads Christophe Pourcel by 30. But the battle for fifth, currently held by Pourcel, is up for grabs. Entering the weekend, Pourcel leads his teammate, Jason Anderson, by just 4 points. Broc Tickle is still alive in seventh, 14 points back, but will need some help to vault both Pourcel and Anderson. –Stallo

A few sources I’ve spoken with regarding Jake Gagne, the current MotoAmerica Superstock 1000 class points leader, who is making his Lucas Oil Pro Motocross debut this weekend, tell me he absolutely flies at the test track. Although he stepped away from the sport full-time ten years ago to concentrate on road racing, he told us earlier this week that “motocross is still my main training.” I’m not sure Gagne can pull off a top-twenty overall this weekend, but it’s definitely a story to keep an eye on. –Stallo