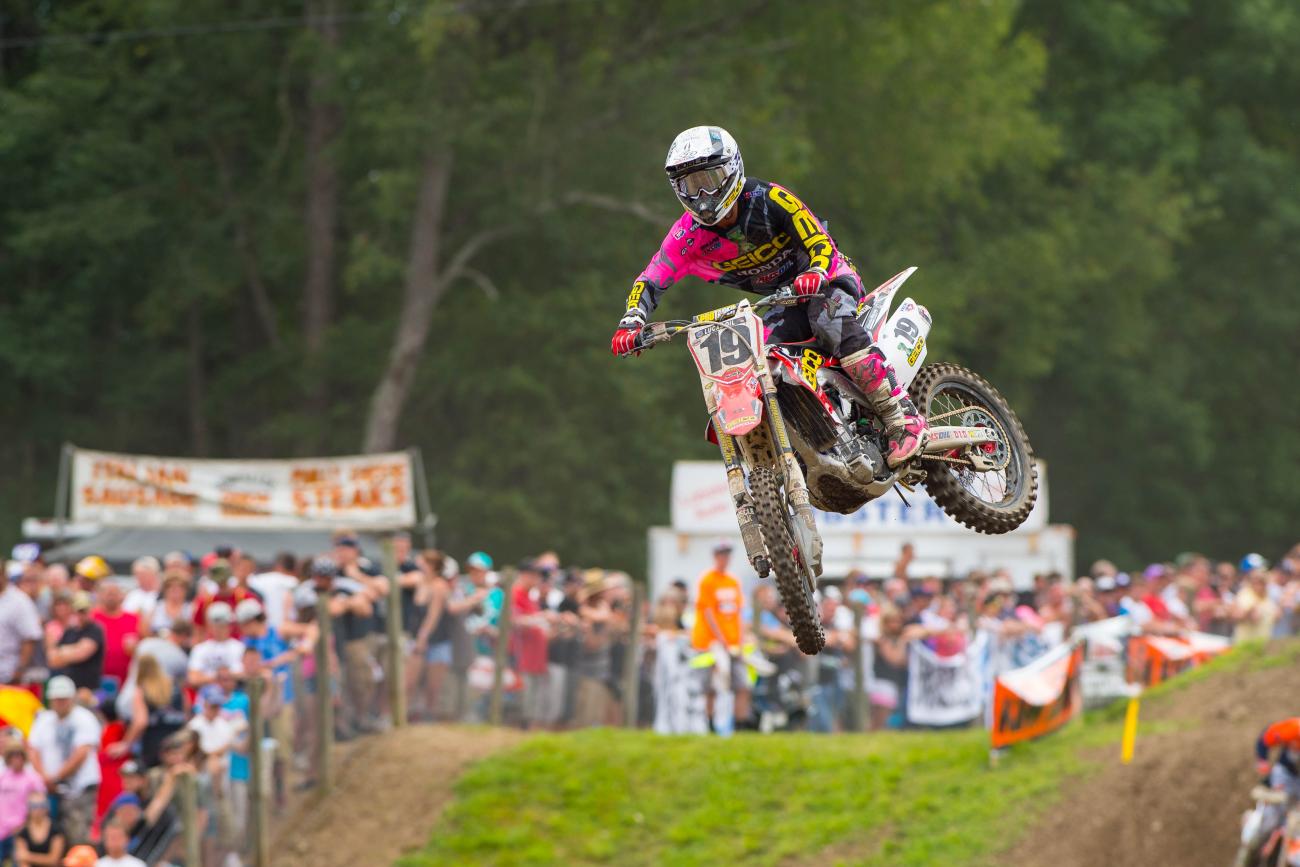 3 on 3 Questions after Dilla

Jason Weigandt: I've been picking Jeremy Martin all along, but it's getting close now. There’s almost no way to pick a fave at this point; the points are so close that one mistake for either rider will tip it, and mistakes are hard to predict. That's especially true with these two, who have made their share. Just recently, Martin blew a moto win while leading at Washougal, and Marvin Musquin tipped over on the first lap at Unadilla. Stuff like that has been happening all season and it will probably happen again. You can try to split hairs over who is faster or stronger, but the mistakes make up a much bigger difference than any of that. Plus, we have Cooper Webb as the ultimate wild card, and right now he's fixing to take Marvin out after what he feels is some rough riding from the Frenchman. I'll stick with Jeremy Martin as a title pick, but man, it's probably best to just sit back, relax, and enjoy one of the best title fights ever.

Jimmy Albertson:  I like Martin in this one. It’ll be close no doubt, but knowing the work ethic and drive of Jeremy makes me lean toward him. The kid is gnarly.

Steve Matthes: Man, it's tough to call. I said Jeremy Martin, and I'll stick with him. With a huge 2-point lead, he is the favorite after all! I’m sticking with Jeremy because I think Marvin has some real issues with Cooper Webb—and not because Webb wants to help out Jeremy because they're teammates. Webb has been battling with Musquin and has not been happy with what he feels has been blatant moving over on jump faces and down straightaways. Webb's not happy, and he's going to make Marvin's life miserable. And since Webb's come back, we've seen nothing but battles with these three. I'm guessing Cooper is going to have his chance at showing Marvin that he's pissed, and that will not be cool as crap for Marv and his title chances.

2. What do you think of this Team USA lineup?

Weigandt: I'm down with it. Barcia and Martin are no-brainers. Obviously Webb, who has never gone before and hasn't raced a 450 outdoors much, is maybe the controversial choice, but I think it's great. This is a pressure event, but Cooper will come in fired up with nothing to lose. I don't think he will feel any pressure but will relish the opportunity. The bigger problem isn't this team—it's the competition. Team France's home lineup of Musquin, Romain Febrve, and Gautier Paulin looks unbeatable on paper.

Albertson:  I like it! It's always exciting to send a younger team in my eyes. Between Barica and Webb, I feel they are going to create an aggressive and fast combo on the 450s, and Jeremy is definitely out for revenge after last year's performance.

Matthes: Well, Ryan Villopoto, Ryan Dungey, and Eli Tomac on the 250F would be better, but hey, what can you do about injuries and someone not wanting to go? I like it. I've been a proponent of Roger DeCoster thinking outside the box for Team USA, and that’s exactly what he’s doing. Webb's been blazing fast since his return from injury, and I'm not worried about his lack of experience on the 450. He'll be stoked to compete, and there is plenty of time to practice and get ready for the race in France. Barcia and Martin are obvious picks as well. It's the best team USA can field as of right now, and although I'd like to see the team named later so you can judge someone like Trey Canard, this will do.

Weigandt: Anyone who wasn't impressed with Simpson is nuts. Luckily, I think everyone was impressed. He nearly stole a podium while riding a new track, on a new bike, in a new country, with very little prep time. Wilson was fine, right about where you'd hope he'd be. Dean has always had incredible speed and potential; I just hope it's still there after all this time off. It's too early to tell if he's going to become an elite race-winning level 450 guy or one of those "chase pack" guys who contends for top-fives. Obviously, the sport is better when it has more super-fast dudes, so we should all root for Deano to find his groove again. Bogle's deal is kind of the opposite. We know what Dean's potential is; we really don't know what Bogle has. Well, he showed that elite-level 450 speed for a few laps. His result wasn't good, but I'm not sure if that matters. He showed he can go very fast on a 450. At this point, that means everything.

Albertson: I feel like they all did great! Simpson got gifted the fourth overall with a 4-8, but nonetheless it was an awesome ride. Bogle opened a lot of eyes and upped his worth for next season. Even though he crashed a bunch, he proved that he could get good starts and run the lead pace on a 450, and that's really critical when you're a free agent heading to the next class.

Now, Simpson was great. The second-highest finishing Scottish racer, you might have heard of him, was a lad who goes by Dean Wilson. He rode well, too. He didn't light the world on fire, but he showed he's a solid top factory racer. Matthes and I were in a hot debate on whose tongue was wrapped further in their wheel, Bogle or Wilson. Those guys looked really tired at the end, but that's understandable being the first race back for both. It was a great effort!

Matthes: Simpson was a nine, Wilson was a seven, and Bogle was a five. How's that? I wasn't blown away by Bogle like so many others were. Yeah, he rode in third for a long time, but, man, did he get tired. Then he crashed out of the second moto—that's not good! "We can work with speed" is the saying, and I get that, but Wilson's workmanlike under-the-radar finishes were great. He'll get better from here. And Simpson, what can you say? Shades of Clement Desalle showing up at 'Dilla a few years ago. Bravo, young laddie, bravo.