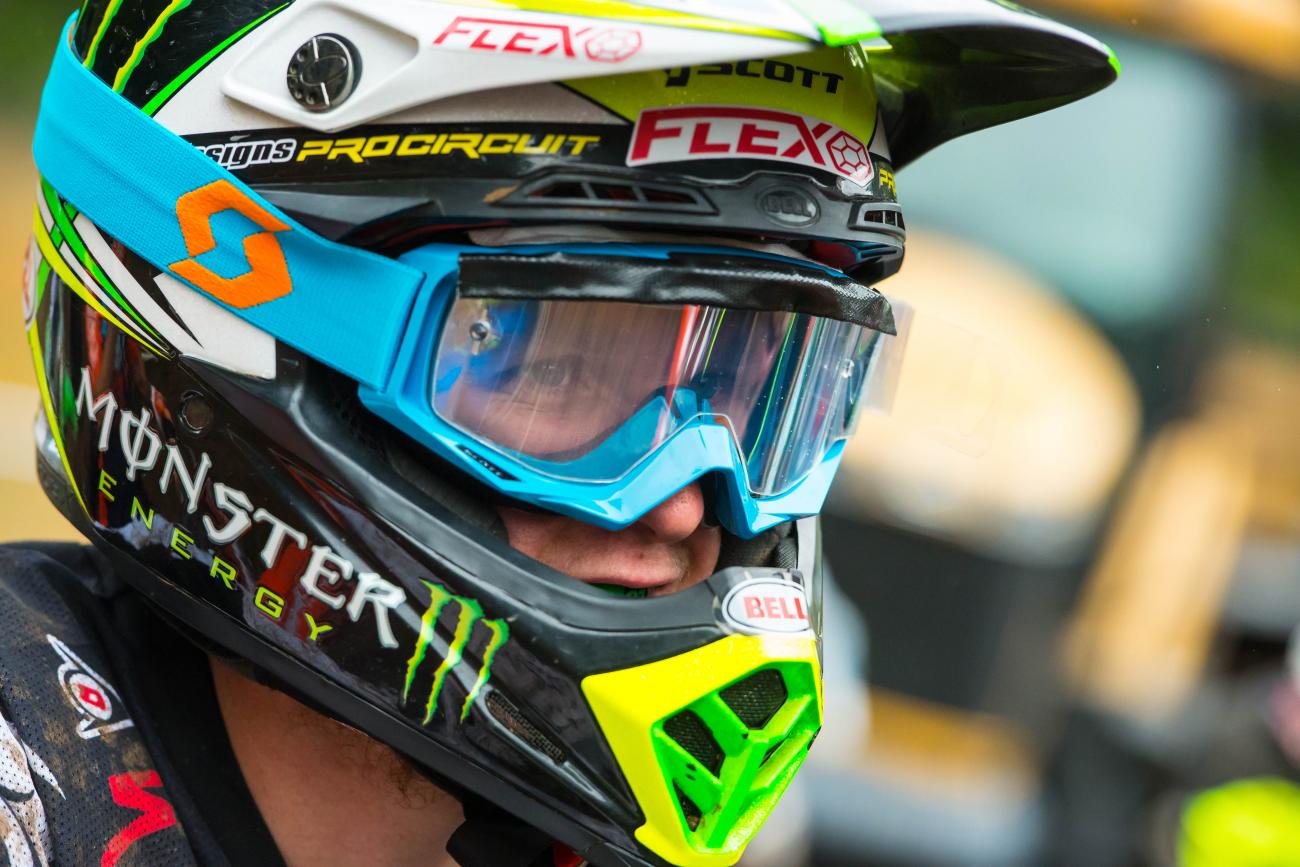 Another step toward a third 450MX championship for Ryan Dungey was taken today at Unadilla, as the current points leader completed a 1-1 sweep with a dramatic second moto win over Ken Roczen.

No one told the defending 450MX champion that the championship was presumably over, as Roczen rebound from a crash in the first moto to climb to second and pressure Dungey for much of the latter half of the moto. Roczen made a last ditch effort to catch Dungey on the final lap, but he lost momentum at the bottom of the hill and had to settle for second.

The instigator of the first turn crash in the first moto, Christophe Pourcel, also bounced back in moto 2, finishing a lonely third ahead of Justin Barcia. Weston Peick, Trey Canard, Blake Baggett, Shaun Simpson, Broc Tickle and Dean Wilson would round out the top ten.

Justin Bogle captured the MotoSport.com holeshot in the second moto, but crashed early in the race. He did return to action, but only completed eight laps en route to thirty-sixth.

A third championship for Dungey seems inevitable, as he stretched his lead to 79 today. A possible 100 points remain in the championship, meaning if Dungey stands pat, he could clinch following the first moto in Utah next week, as a possible 75 points will remain at that time.

Impressive performance from the Scot, Shaun Simpson, today at Unadilla. In his first race on American soil, the privateer in Europe finished fourth overall behind Trey Canard.

It’s been a trying year for Monster Energy/Pro Circuit Kawasaki in the Lucas Oil Pro Motocross Championship. After showing early flashes, Adam Cianciarulo was lost to a shoulder injury. Arnaud Tonus can’t get healthy and has missed nine of ten rounds. Tyler Bowers hasn’t made a gate drop after undergoing back surgery. Chris Alldredge has struggled with consistency in his rookie year and for as good as Joey Savatgy has been, he has yet to win a moto. Mitch Payton sets the standard high, and he expects wins.

Today, with a second place finish in moto 2, Savatgy ended the Pro Circuit drought, claiming the overall win over Marvin Musquin and Jeremy Martin. It is the first win—in supercross of motocross—for Pro Circuit in 2015. “I can’t even… I don’t even know what to say,” Savatgy said on the NBC Sports broadcast. “I wanted to get a win for Mitch [Payton] so bad.” The win is the first of Savatgy’s career.

More unrest in the up and down 250MX title chase. Following a first moto win, Jeremy Martin had extended his championship lead to eleven over Marvin Musquin, only to watch it vanish in the second 250 moto at Unadilla.

Slow starts have hindered Martin for much of 2015, and they were a problem again in the second moto. Buried outside the top ten, Martin could only work his way to fifth. This left the door open for Musquin, who had to fight off a frisky Cooper Webb early in the race, before climbing past early leader Savatgy to secure the moto win. Martin’s lead is now two heading into the penultimate round in Utah in one weeks time.

Webb could have stolen more points for his teammate Martin, as he challenged Musquin for the lead as the moto came to close. But a crash with two laps to left Musquin unchallenged for the win. Webb would get back up and finish twenty-third.

GEICO Honda’s RJ Hampshire and Jordon Smith each held second for a period in the second moto, but each had separate crashes and finished seventh and eighteenth, respectively.

Ryan Dungey refuses to take his foot of the gas despite a 69-point lead in the 450MX championship. In the first 450 moto, Dungey squared off the MotoSport.com holeshot winner Justin Brayton early in the first lap and was never challenged en route to the moto win, his fifth over the last seven motos.

Justin Bogle, who sustained a shoulder injury at the Lucas Oil Pro Motocross season opener at Hangtown in the 250 Class, said he was “banged up a little bit,” prior to his 450 debut and wasn’t expecting much as far as results. The injury didn’t seem to affect Bogle early in the first moto, as he held off fellow Oklahoman Trey Canard for third until the three-minute mark, before everything came unraveled and he feel back to tenth late in the moto. We will give an update on what happened to Bogle as information becomes available. The podium is the first for Canard in 2015 after missing the first eight rounds due to injury.

Shaun Simpson made a splash in his first career Lucas Oil Pro Motocross race. The Scot, fresh off a 1-1 performance at Lommel in the FIM World Motocross Championship a week prior, finished fourth in the first moto.

Justin Barcia finished second and gained valuable points on Ken Roczen for second in the championship after Roczen went down in the first turn after Christophe Pourcel lost the front end. Roczen finished sixteenth, while Pourcel finished twenty-third.

In his first race back since tearing his ACL and MCL in January, Red Bull KTM’s Dean Wilson finished just outside the top ten in eleventh.

It’s hard to remain patient when your chief rival for the championship is closing in. But Jeremy Martin has been here before and was able to use his experience during a championship battle last year, which he came out on top of, to stay calm during an intense battle in the first moto at Unadilla.

Joey Savatgy, coming off his worst performance of the season two weeks ago at Washougal, claimed the MotoSport.com holeshot over Christian Craig. Separated by just four points, Martin and Marvin Musquin were both inside the top five in the early running. Musquin was the first to bend, tipping over on the first lap and dropping a few positions.

Despite being under immense pressure from the championship leader, Savatgy remained steadfast, leading well past the halfway mark. Martin keep his cool, trying numerous lines to try and take the lead. But it wasn’t until the six-minute mark that Martin was able to make a pass stick, charging to the lead en route to a moto 1 victory.

Musquin, a heavy favorite at the European-style track, couldn’t seem to get a rhythm going, coming up short on a late ditch effort to pass Chris Alldredge for third. With his win, Martin picked up seven points on Musquin and extended his championship lead to eleven.

Savatgy finished second with his teammate Alldredge in third. Musquin finished fourth ahead of Craig.

Round ten of the 2015 Lucas Oil Pro Motocross Championship is taking place at Unadilla Raceway in New York under beautiful skies. Both 250MX and 450MX practices are done and it’s a French sweep with Red Bull KTM’s Marvin Musquin standing atop the 250 Class and Rockstar Energy Husqvarna’s Christophe Pourcel taking the fastest time in the 450 Class.

Lommel MXGP winner Shawn Simpson acquitted himself quite well both times out on the track and will go to the gate fifth for the first moto. The two returnees from injury, Justin Bogle and Dean Wilson, finished sixteenth and seventh, respectively.

Musquin set his fast time early in the first practice as he railed some outside berms that no one else was on the way to a time that was almost two seconds faster than that of his championship rival Jeremy Martin. Washougal winner Cooper Webb was third. In just his second race back, Rockstar Husqvarna’s Martin Davalos was fourth.

Lucas Oil Pro Motocross is back in action at one of the most famed stops on the circuit—Unadilla MX. Home to iconic obstacles such as Gravity Cavity and the Skyshot, the New Berlin, New York, venue was part of the inaugural Lucas Oil Pro Motocross Championship schedule back in 1972. While much has changed—on and off the track—the stop in upstate New York is still a bucket-list race for fans of motocross.

Entering the tenth (of twelve) round of the championship, it is possible, although not likely, Red Bull KTM’s Ryan Dungey could clinch his third 450MX championship today. Dungey enters the weekend 69 points clear of Justin Barcia and Ken Roczen, and with a possible 150 points available, Dungey would need to pick up 31 points this afternoon. The more likely scenario will see Dungey clinch next weekend in Utah.

The 250 Class is a much different story, as defending 250MX champion Jeremy Martin is holding onto a slim four-point lead over Marvin Musquin. Two weeks ago, at a rainy Washgoual National in Washington, Musquin sliced 15 points off Martin’s lead. The European-inspired Unadilla track heavily favors the Frenchmen, as a foreign-born competitor has won five of the last eight seasons in 250MX, including Musquin in 2012. One must remember, though, that Martin bested Musquin at Unadilla a year ago, winning the second moto en route to second overall.

Red Bull KTM’s Dean Wilson is back for the first time since tearing his ACL and MCL at the KTM test track in January. Wilson, who signed a two-year deal with KTM last off-season, rode press day on Thursday and wrote on Instagram: “Had some fun on press yesterday. I forgot how bad the roost was here.”

MXGP star Shaun Simpson has made the trip from the FIM World Motocross Championship to make his American debut this weekend. The Scot is fresh off a 1-1 finish last weekend in the deep sands of Lommel and recently told Racer X contribuor Adam Wheeler that he just wants to enjoy the experience and doesn’t have any expectations in regards to results. Simpson, currently sixth in MXGP points, is receiving help from factory KTM this weekend and will wear #274.

Also back is GEICO Honda’s Justin Bogle, who has missed the last eight rounds with a shoulder injury. Bogle will make his debut on the 450 this weekend as he tries to lock down a ride for the 450 Class next season. "Health-wise I'm banged up a little bit, but I'll be all right," Bogle said in a recent press release. "I'm going in with no real expectations. I'm just hoping to put my name up in the mix and do as well as I can. I know if I do that, I'll be satisfied."

Bogle will be riding the injured Eil Tomac’s vacated bike. "He had that bike working very well. I'm very excited about that; the bike is awesome. I'm just getting set up with the race program to come into the 450 Class for my debut. Unadilla has been good to me in the past, so it's a good one to make my return at, for sure.”