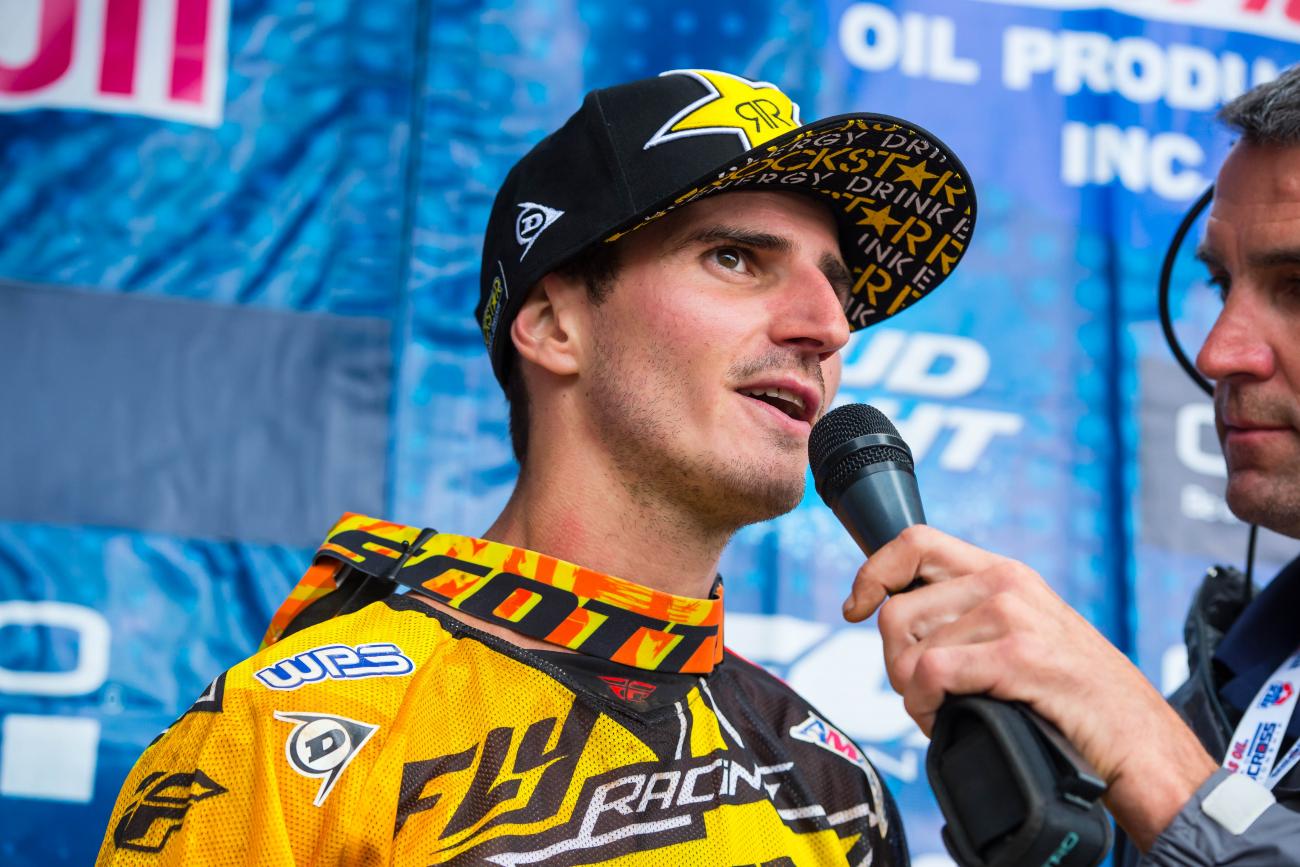 It’s no surprise that Unadilla is Pourcel’s favorite Lucas Oil Pro Motocross track. With its ruts, European flavor, and unique line options, the venue fits the Rockstar Energy Racing Husqvarna rider like a glove. He’s won there twice, too, with his latest victory coming just last year, and beyond the numbers, his line choices and moments of “Where did he come up with that?” go to the next level on this track. And with the Frenchman riding a bit of momentum into the weekend from his podium in Washougal, the timing couldn’t be better for the series to head to his strongest track. Look for another Pourcel podium at Unadilla. Could he do one better and deliver his first-ever 450 win the U.S.? –Aaron Hansel

We’ve had a fantastic points battle this year for the 250 National Championship between Marvin Musquin and Jeremy Martin. Just when it looks like someone is getting an advantage, something happens and the points even right back up. At Washougal, it happened again—Musquin came in with a 19-point deficit and left trailing Martin by a mere 4 points. Musquin should be in better shape this weekend too—he had a week off to let his injured wrist heal and Unadilla is typically a track where European riders shine. We’ll see who leaves New York with the red number plate. –Hansel

Before Washougal there was some discussion on whether or not Justin Barcia would catch Ken Roczen for second in points. That debate is officially over now. Barcia has closed the gap, and the two are tied for second with 331 points each. Unless the two earn the same number of points on Saturday, someone’s leaving Unadilla with sole ownership of second place. We’ll find out who comes out on top this weekend. –Hansel

A glance at Anderson’s 6-DNF result from the last round doesn’t reveal just how fast he was at Washougal. Anderson earned that sixth in the first moto after pitting on the first lap and rejoining the race in thirtieth, and before he developed mechanical problems in the second moto he was running fourth despite a crash. If he avoids the bad luck, this weekend he could be looking at a podium. -Hansel

It isn’t likely to happen, but Ryan Dungey has a chance to clinch the 450 National Championship this weekend. After Unadilla there’s just two races left, which means Dungey would have to have a 100-point gap over second place. Mathematically, it’s not impossible. He’s 69 points up on Barcia and Roczen right now, so he’d need to get his fifth win of the season and put an additional 31 points between himself and Barcia and Roczen. It’s a long shot, but if Robbie Maddison can surf monster waves on a dirt bike, anything’s possible. -Hansel

Unadilla is unique in that, unlike most stops in Lucas Oil Pro Motocross, the main track is not open to the public. (They do have an amateur track on the property that people ride.) Even if you are from the area, like AutoTrader.com/Toyota/JGR Yamaha’s Phil Nicoletti, you don’t necessarily have a home track advantage. Nicoletti told us last week at Loretta Lynn’s that the first time he ever really rode the track was in his first professional season in 2008. He went on to say that no other track in the area really has the same type of surface, so while he grew up in the area, Unadilla doesn’t really play to a home track advantage for him. In recent years, Nicoletti has had success at the track, though, finishing inside the top ten the last three years. Maybe the vibe from the local fans helps? Phil is coming off a top-five overall performance at Washougal. Will he keep the momentum going at his “home track?” –Chase Stallo

In 2011, Justin Barcia raced the last four rounds of Lucas Oil Pro Motocross aboard the 450, making his debut at his home race of Unadilla. Barcia stuck his nose right in the Ryan Dungey/Ryan Villopoto title fight, ruffling the feathers of Dungey en route to third overall. Since his re-birth at Budds Creek this year, Barcia has consistently become the one rider preventing Dungey from clinching a third 450MX championship. “Me and Ryan actually have battled there before, so I’m looking forward to dicing it up there,” Barcia said after Washougal, referring to the 2011 race. While there may not be a “home track” advantage in the traditional way (see the Nicoletti entry above), Barcia thrives in front of the hometown crowd. Will he bounce back this weekend from a lost opportunity at Washougal? -Stallo

The Scottish are Coming, Part I

Not since Belgians Clement Desalle and Kevin Strijbos came over in 2013 and raced Thunder Valley and Tennessee has a top MXGP star embarked on American soil. On the heels of a 1-1 performance last weekend at Lommel—his first overall since 2013 at Lierop—Shaun Simpson will make the trip from Europe to race Unadilla. In a recent interview with Racer X Contributor Adam Wheeler, Simpson said he has always been curious about the Nationals and that he just “want(s) to enjoy the experience, see, and learn a bit and not have any expectations for results.” Simpson is getting help from Factory KTM this weekend and will sport number #274. How will the Scot do? –Stallo

The Scottish are Coming, Part II

Out since January with a torn ACL and MCL, Dean Wilson makes his long-awaited return to racing this weekend. When we caught up with Wilson in early June, he told us that during his recovery he also travelled to Belgium to have arm-pump surgery, something that’s hindered him the last few years. “It’s really, really hurt me,” he said at the time. “I’ve fallen backwards through the pack, and it just came to the point where I really needed to do something about it. So I went to see some doctors, and I ended up having carpal tunnel.” Wilson has dealt with a myriad of injuries the past few seasons and missed a ton of time—it will be interesting to see where the 2011 250 National Motocross Champion stacks up this weekend. –Stallo

Monster Energy/Pro Circuit Kawasaki’s Joey Savatgy has been one of the most consistent 250MX riders in 2015. The third-year pro is currently tied for third (with Alex Martin) with eight moto top-tens and is tied for fifth (Alex Martin) with four moto podiums through nine rounds. He used that consistency to climb as high as third in the point standings. But following his worst performance of the year (12-21 for seventeenth overall) at Washougal, Savatgy has Alex Martin and Jessy Nelson (7 points back) breathing down his neck for fourth in points. Furthermore, he now trails Zach Osborne by 19 for third. The last time Savatgy had an off day (12-12 at RedBud), he bounced back with an overall podium at Millville. Can he do the same this weekend? –Stallo

…And brings leg swag to the 450 Class. Bogle, who has been out since Hangtown with a shoulder injury, will make his 450 debut this weekend at Unadilla. Forced to graduate to the 450 Class next year, Bogle will be using the last three races to market himself for a ride next season. How will he fare in his first race back? -Stallo