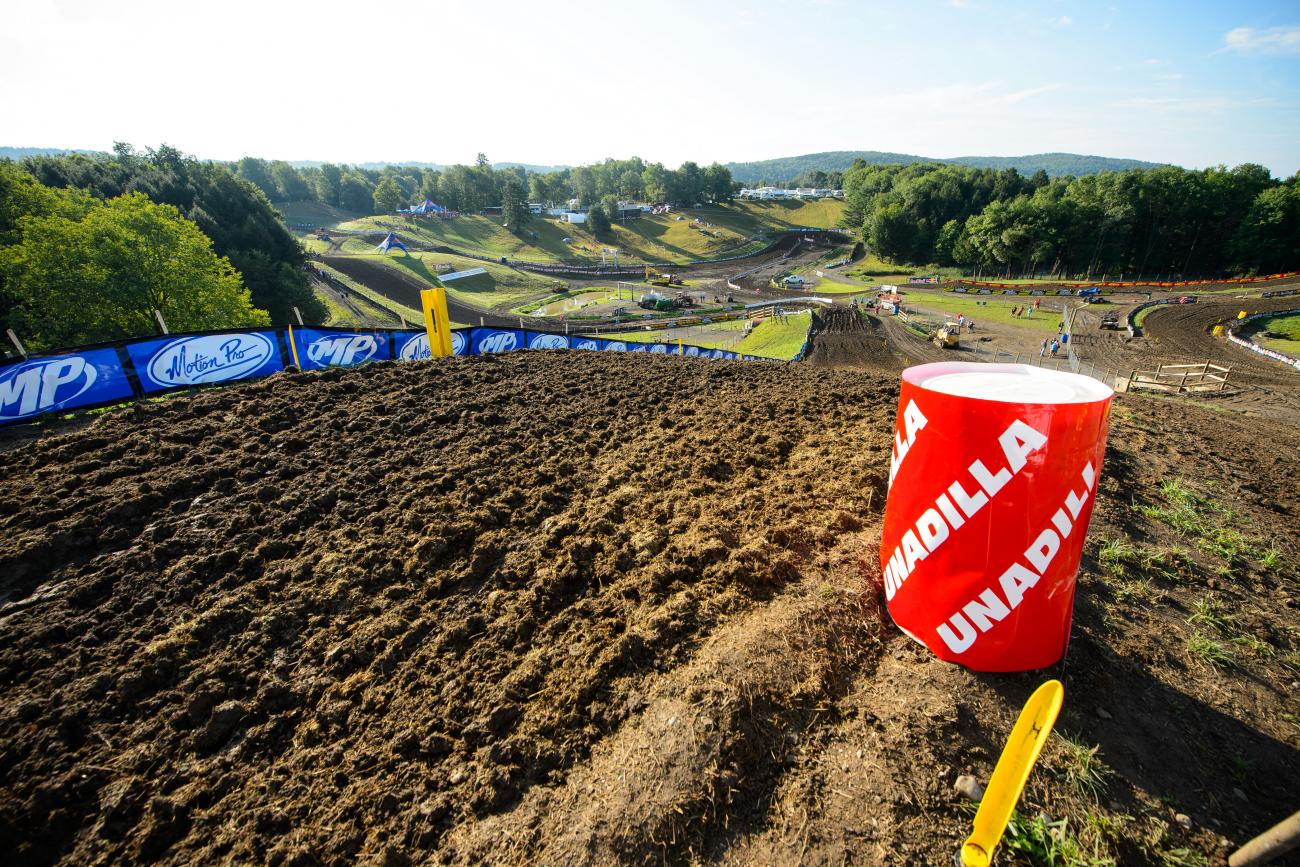 3 on 3 Questions for Unadilla

1. Give us a good Unadilla story.

Jimmy Albertson: In 2008, factory Honda told Jeff Alessi and me that they were going to pick one of us to fill in for Ben Townley for the rest of the season right before Unadilla. In moto one, I was running in seventh and went down twice in the same lap, going back to around twentieth. I knew I had to beat Jeff no matter what, and with two laps to go, I could see him about ten seconds in front of me. I rode the best two laps of my day and passed him on the last lap in gravity cavity fifty feet before the checkers. Obviously, both of us came off the finish line jump wide open! I landed so hard my hand blew off the bar, but I saved it. Jeff landed from about 120 feet directly on to Charles Summey, who rolled the finish in front of us. Jeff dislocated his shoulder and couldn't race the next moto. Needless to say, it was a crazy tryout.

David Pingree: While I grew to appreciate the track, I never did well there. I have, literally, no good racing stories from Unadilla. However, I have plenty of off-track stories. One year, I was out having a few post-race drinks with Buddy Antunez, Michael Brandes, and a few other guys. By the time we made it back to our hotel, we were pretty tuned up, and Brandes, in particular, was in rare form. We were lugging our gear bags into the hotel, and I saw Brandes stop at the first fire extinguisher we came to and unhooked it from the wall. I immediately went into a full sprint to get to my room because I knew things were about to go sideways. With one eye closed, I scrambled to get my room key out of my pocket and into the door. I darted inside my room, pulled my bag in, and tried to slam the door shut only to see Michael’s size-ten Etnies shoe stuck between the door and the jamb. Then I saw the nozzle from the extinguisher, and then everything went white. He unloaded that thing in my room, and it looked like it snowed three inches on everything when it all settled. Like a complete a**hole, I grabbed the extinguisher and chased him down the hall with it, unloading the remaining contents, setting off the fire alarm, and causing a hotel-wide evacuation. Needless to say, our team manager was less than impressed, and we had to pay a pretty steep cleaning fee when we sobered up enough to find our wallets. So young and soooo dumb.

Jason Thomas: Back in 2005, I was on the Subway/Coca Cola Honda team. I had been doing pretty well all season and had come off a decent supercross season. With the weekend off before Unadilla, the fine folks at what is now Feld Motor Sports asked me to travel up to Toronto for a bit of World Supercross promo. It was a very short trip, flying in on Tuesday for a few radio spots Wednesday morning and then flying back home Wednesday night. Sometime Wednesday afternoon, I felt some sort of sickness coming on while killing time before my flight. By the time I got home, it had developed into a full-blown flu situation. Needless to say, trying to race that weekend in Unadilla was going to be a challenge.

The morning of Unadilla seemed to be going pretty well besides the flu symptoms. Going into the morning qualifiers, I was riding well but had no idea how I would hold up in the New York heat that afternoon. I jumped out to a good start in the qualifier and was trying to just put in my four laps and get back to my trusty lawn chair in front of the fan. On the third lap, I dropped off a big hill in the back, and just as I touched the terra firma, my engine exploded into more pieces than NASA uses on space shuttles. I tumbled and flipped all the way down the hill until sliding to a halt. As I picked myself up off of the ground, I couldn't help but notice the junkyard of Honda 450 parts surrounding me in the dirt.

Shortly after, my mechanic Dane arrived and began to coordinate an ATV tow job back to the pits for my engine-less race bike. I began walking back, and just as I was climbing one of the bigger hills, I saw him ride past me on my trailer of a bike. I'm completely covered in mud, with a broken helmet, and sicker than a dog. Dane, though, thinks this is the funniest thing since The Nutty Professor. He's laughing uncontrollably as he rides by me, which, if you know me, didn't go over well. I may have unloaded on him a bit back at the truck for more than a few things that had gone wrong that weekend.

I spent the rest of the day watching everyone race Unadilla, but as sick as I was, it was probably for the best. Ten years later, I still can't forget the look of sheer delight on Dane's face as he cruised past aboard my destroyed bike.

Albertson: Well, you jump into it, and, when you get to the bottom, you feel a lot of gravity pushing down on you. Then you jump out of it and feel no gravity when you are in the air. I know—mind blowing.

Ping: I thought it was better before they started “enhancing” it. It used to be a natural drop, and you could hop into it from a bump or from the top of the turn. Now, they’ve built up a lip so you have to scrub down it, and you have no options when dropping in. Same goes for jumping out. You used to be able to look for low spots to stay closer to the ground because it was all natural terrain. They’ve boosted the lip a little now, and it sends you to the moon no matter where you hit it. Jumping out is a blast—like dropping in on a big roller coaster. Landing sucks. That feels like jumping off a roller coaster and landing on your feet in the parking lot.

Thomas: Gravity Cavity is cool, but like many, I prefer how it used to be versus today's version. It used to be more natural, and seeing how fast you could scrub out of the cavity was a test of technique. Now, it's much more of a sky-shot-type jump, and if you happen to go a bit far, landing in the bumps is a mistake to be remembered. It's still a unique aspect of a historic facility, but I think less was more.

3. How about the Unadilla roost?

Albertson: To be honest, I think that the dirt has fewer rocks in it now than it used to. My first year was in 2008, and it seems like every year they comb through it to get the rocks out. I honestly think the roost at Washougal hurts worse, but every now and then Unadilla you will catch a big rock to the upper arm. Now that hurts!

Ping: I’ve never been shot, but I imagine if you got shot in the chest at close range with a shotgun, it would feel a lot like Unadilla roost. Hand guards, a chest protector, and a nose guard are musts here.

This doesn’t fit anywhere, but one of the coolest memories I have of this place is being the first guy out for practice back in the late 1990s (maybe 1997) when it was all grass still. It felt like going back in time and riding during one of the old USGP races there or Trans AMA or something. I’ll never forget the feeling of roosting through that grass for those first few laps.

Thomas: Unadilla roost is the most painful of the season. The rocks are actually a bit less prominent nowadays with the efforts of promoters to sift them out, but the dirt still has rock in it nonetheless. I’ve seen some particularly nasty injuries arise from the Unadilla rocks, such as Chris Gosselaar taking a rock to the face a decade ago or so ago. It split his eye wide open and certainly ruined his day.

It’s the race where everyone will wear the most protective equipment that they can find. Hand guards, chest protectors, and even extra armor for the bikes are commonplace—medieval times meets motocross.