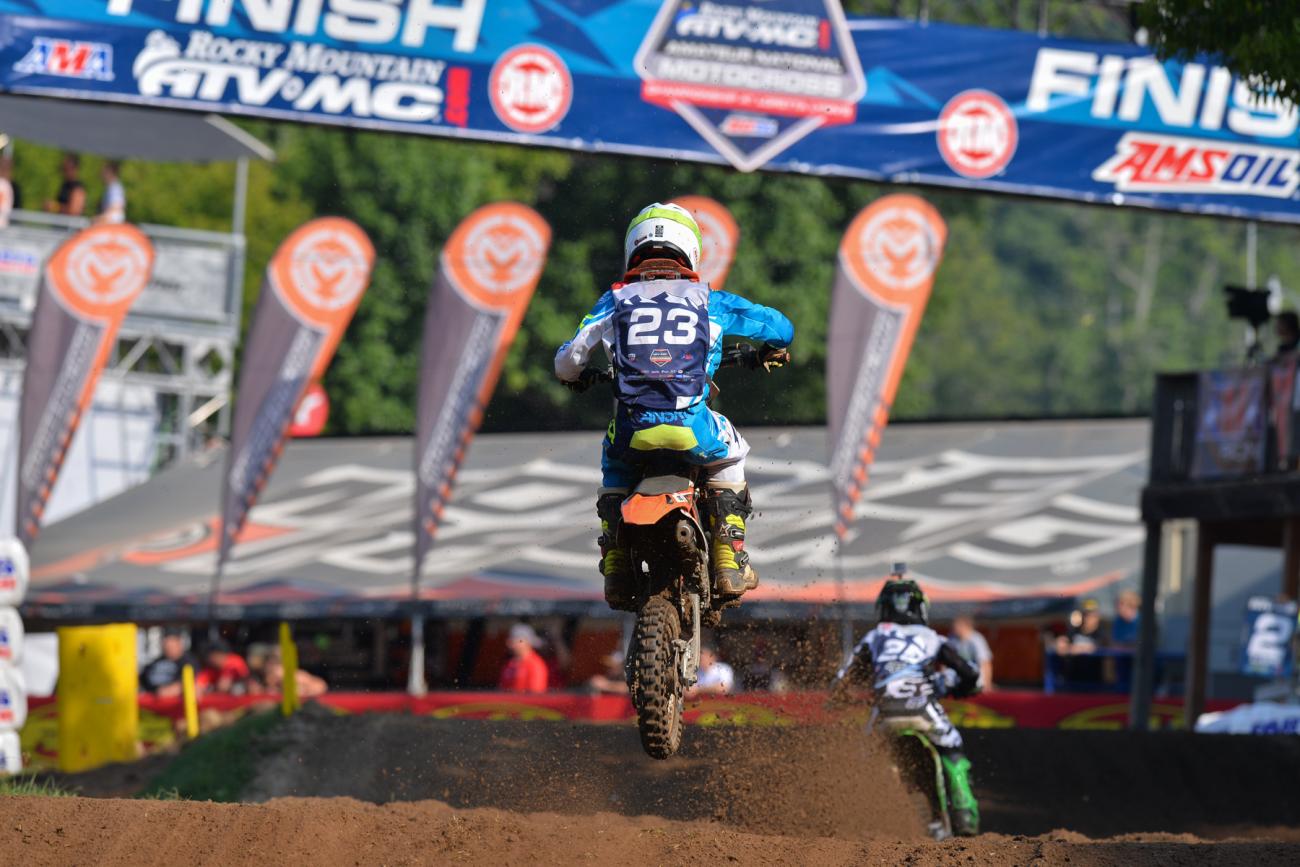 The search for heroes is on at the 34th annual Rocky Mountain ATV/MC AMA Amateur National at Loretta Lynn Ranch, presented by Amsoil. Last year’s event produced a glut of factory-supported talent, with Chris Alldredge, Aaron Plessinger, Jordon Smith, RJ Hampshire, and Luke Renzland all getting good jobs as pros, and recently KTM’s Orange Brigade program moved Daniel Baker and Alex Frye up early into the Lucas Oil Pro Motocross Championship this year. That makes for seven slots already filled with noobs, so no one is sure if any of this year’s grads can stand out enough to get that type of support. Tuesday was day one of the event, and it provided some clues.

So far, the strongest program has been the traditional powerhouse of Kawasaki Team Green. Arizona’s Mark Worth is making an early bid for the coveted AMA Horizon Award with a strong ride in the first 250 A moto, also logging the fastest lap time of the day with a 1:56.6. It’s especially impressive since the track was brutally rough late in the day for that moto, with some saying it’s the roughest they’ve ever seen. Plus, the heat and humidity were back to the traditionally searing levels after last year’s miracle run of eighty-degree days. Worth shrugged it all off, topping his Kawasaki teammate Mitchell Harrison for the moto win. Worth and Harrison are also placed in Open Pro Sport, but both had to come from behind. Harrison crashed early and came from eleventh to fourth, and Worth came from twentieth to fifth. First moto gate picks are still picked at random down here, so favorites are left just trying to salvage something and stay in overall contention in the three-moto format. Congrats to Yamaha men Egan Mastin, Marshall Weltin, and Benny Bloss, who swept the podium in that moto.

Down in the B class lives perhaps the hottest property in amateur racing, Kawasaki’s Austin Forkner, who won his 250 B moto. Forkner rose to prominence as a minibike and supermini dominator, and he hasn’t missed a beat since moving to big bikes this year. He could be the “next big thing” to come out of here, but that time will likely be a year away. He’ll also have some strong B class comp this year. Yamaha’s Chase Sexton could have the stuff to beat him, but got a bad start in the moto, while Forkner snuck through an early pileup and took off with the lead. It will be interesting to watch these two, as well as Lucas Oil/Troy Lee Designs KTM’s Sean Cantrell and several other fast B kids, throughout the week.

Kawi also has some mini ringers, including Jett Reynolds, who is part of that Bakersfield, California, base of bad little dudes. Reynolds won both of his motos—85 (9-11) stock and mod. It’s a long week and anything can happen, but if Reynolds were to sweep his two 85cc classes, it would match his two 50cc titles from 2013 and two 65cc titles from 2014. No mini rider has ever won six straight titles in three years on three different sized bikes.

KTM’s Orange Brigade program does have some classes to shine in, though. They literally swept the 65 (10-11) Limited class, with Max Vohland winning it and every single other rider in the class also riding a KTM. That’s Yamaha-in-the-PW50-class-level dominance.

In the vet classes, it’s cool to see Sebastian Tortelli give Loretta’s a shot, but defending 25+ champ Ricky Renner bested him in their first moto. Then Tortelli ran into the Loretta’s buzz saw of Robbie Reynard in 35+ and finished second again.

Perhaps the best racing all day came in the 30+ and Women’s classes. The 30+ featured a wild five-rider battle early, and boiled down to Paul Perijbinos, Dean Wilson’s old Pro Circuit mechanic who now works for ANSR, and Arkansas’ Blake Keeton. They passed each other a good four times, with Keeton making a last-lap pass to take the hard-fought win.

The Women’s class features the return of Jessica Patterson, and she led early. Australia’s Mackenzie Tricker, last year’s champ, slowly worked her way forward into the lead, and held off intense pressure from KTM riders Kirsten Raemisch and Brandy Richards. It went down to the last lap. Tricker won it, with just 1.7 seconds between her and third-place Richards. Patterson was fourth.