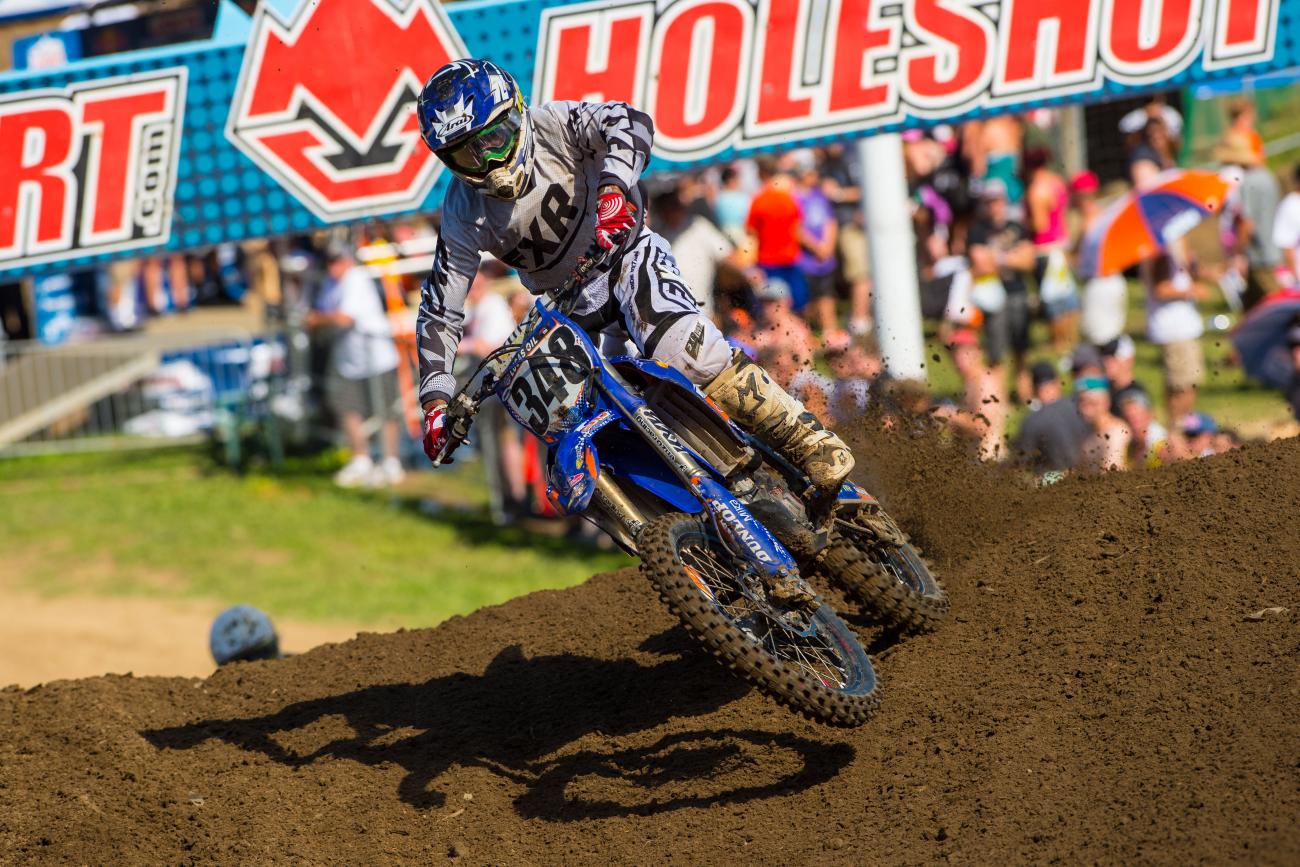 Since turning professional at the end of the 2010 Lucas Oil Pro Motocross Championship, Jason Brooks has had an unorthodox career. He spent his 2011 season racing limited rounds and then sat out 2012 due to injury. In 2013, he was able to contest eight rounds of the Nationals in the 250 Class and scored points for the first time in his career.

Last season, the support just wasn’t there, so Jason and his father created a construction business together. He quickly realized he would much rather race a dirt bike, and went to Daytona Beach over the winter to train for the 2015 season. Brooks picked up some support from Bill Dill at 3D racing, and the two have been chasing the dream this summer, making every round.

Brooks recently had a weekend to remember as he finished thirteenth overall at Millville, scoring a pair of fourteenths. It was a career high and a dream come true for the 23-year-old from Connecticut. We caught up him midweek to get his thoughts on his breakthrough ride.

Racer X: Is this really your first interview ever?
Jason Brooks: I’ve never done an interview like this. I did have a video of me go up on Racer X once. Robb Swiatek did a video for me as I was gearing up for Loretta Lynn’s. I talked in that video, but I wouldn’t call it an interview.

I remember watching that back in the day. We’ll have to make this the best interview ever then, right?
That’s right, you have the first one. Let’s get into it!

Let’s first touch on the fact that you turned pro in 2010, and now five years later you are putting in some very impressive rides. You stuck with it and finally accomplished a breakthrough ride. How are you feeling about all of this?
Yeah, I turned pro after Loretta’s in 2010, and then the next season I only did select rounds. I was only able to do the East Coast rounds like Unadilla, Steel City, and then Southwick when they had it. I got hurt before the Southwick National in 2012, so I decided to sit that season out. When 2013 came around, I decided to do about eight rounds. I actually scored a couple of points that year. After that nothing really came through for me. I didn’t receive any help. Last year I just took the year off, and my father and I created a business together. This year, I came back at it, and 3D Racing stepped up to drive me to all of the rounds. Right now we are hanging by a thread getting to each round, but also every weekend I’m getting better. More people are trying to get on board.

Wait a minute—you were doing the old nine-to-five gig?
Oh yeah, nine to five! Actually, every time I come home from the races I have to help my dad out a bit. He still has me on the computer writing up a contract or an estimate. It’s hard to get it all finished, but if you want something to happen, you have to make it happen.

What kind of business did you two start?
It’s a home remodeling business. We do everything from windows to additions. We are actually in the process of flipping a house right now.

Professional racer and construction—from your resume it’s clear that you aren’t afraid to work hard.
Exactly, but I have to flip my own bill though. The bills aren’t going to pay themselves. I have to make some money to be able to do all of these things. I’m having a blast with what I’m doing in life, so I can’t complain.

You’ve been at this quite a while, and you finally made it into the top fifteen. How rewarding is that for you?
When I cracked the top fifteen, it felt so good. When I came off of the track, I was shaking and I was so happy. I can’t believe it happened. A lot of it has had to do with my confidence. Every week I’m getting better and better. I’ve got people behind me now too. Bill Dill from 3D Racing used to race back in the day. He’s had teams and riders run up inside the top five. It motivates me. We changed suspension companies too, and at Millville I ran Enzo. The bike just felt great this weekend.

You talked about more people stepping up to help you. The most noticeable change is your gear. You have an interesting story about.
FXR stepped up, and I’ve been wearing their gear the past two weekends. It was actually a bummer how it happened though. At Colorado I had a bag with four sets of gear in it, and someone came by and snagged it from my rig. FXR sent me a set and then brought me three more sets at the race this weekend. It was their new 2016 stuff, too. Millville actually brought a lot of sponsors on board. We now have Vertex Pistons, VP Racing Fuels, Galfer, Decal Works, Mika, and Rocket Exhaust actually gave us a pipe. So that helps out a lot.

It sounds like things are going in the right direction for you. This is your best season by far. You’re sitting twenty-sixth in the standings right now. Has that sunk in yet?
Every week, I get a few more points, and I keep moving up a spot. When I’m driving or flying back from the race, I always look at the results and the points. I’m seeing where I could be and if I can maybe get a double-digit number for next year. It’s the best feeling in the world.

You mentioned earlier that you were hanging by a thread to get to the races. Will you be at the final four rounds?
Yeah, we are going to plug all the way through. We’re going to do them all, and Bill is paying for the gas out of his own pocket. We have to change the oil, do maintenance, and fuel isn’t cheap as well. Hats off to him, though; he’s getting me to every round and that’s what counts.

How did you meet Bill, and how did racing for him this summer come about?
He’s a local rider from the NESC where all of us grew up racing. He had a couple of teams here and there. He talked to me this winter and knew that I was riding down south and getting ready. He asked me if I was going to do the Nationals, and I told him that I was going to make them regardless if I had help or not. He wanted to help out, so I thought it was perfect.

What has kept you going through all of the ups and downs of your pro career?
There’s a lot. I mean, my dad is just so proud of me when I just qualify into the motos. He texted me this weekend when I got in telling me that it was so awesome. It’s everybody who is supporting me, too. I just enjoy hearing people tell me that I’m doing awesome.

You may not have had the support early on, but you stuck with it and now you are gaining some recognition. It’s not often that riders will take the route that you took and then be successful. And yet here you are having your best season.
I think the first couple of years that I raced I didn’t take it serious enough. I was 18 years old and jumped from Loretta’s to the pro nationals. I don’t think I took it as serious then. Now I’m a working-class man and doing the nine-to-five routine. I’m looking at either swinging a hammer or riding my dirt bike all week. It’s a lot better to say that I race professional motocross than I work at a construction site.

If you keep getting good results, you might just have to have Dad just stay home and do all of the work.
I know! My brother will have to start stepping up and type contracts on the computer now.

If you have any spare time, what do you like to do?
I’m a pretty laid-back person. In the wintertime we go skiing. I like to ride bicycles and work out in the gym. Other than that, I just like to hang out with my family and my little brother. My family and I are very close.

So now that you have made it inside of the top fifteen, what do you want to accomplish in these final eight motos?
The main thing I want to accomplish that I want to get as many points as I can. I want to get into that top twenty. Once you get inside that top twenty overall, people want to help you out even more. The main goal is to get a two-digit number as low as I can go. Hopefully, that will carry me into supercross and I can get some support for that.

Jason also wants everyone to check out his Instagram updates from the road @brooksyy34.