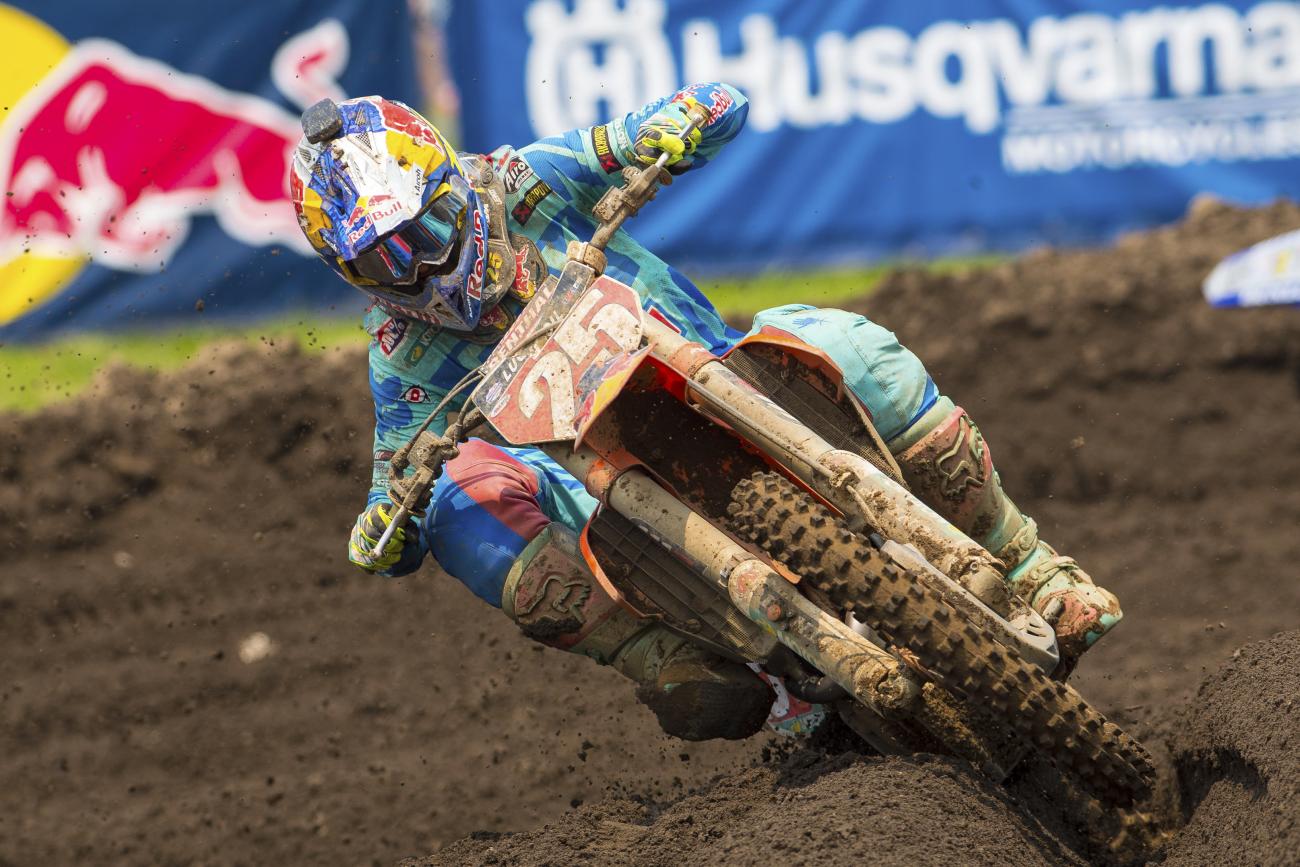 Justin Barcia might make the case for momentum in the 450 class, but the 250 division has been the exact opposite this summer. Each time Jeremy Martin makes a run, he has a set back, and each time Marvin Musquin makes one, he too stumbles. Marvin won High Point and Budds Creek back-to-back, which must have been too much for the moto Gods. This week his wrist injury, suffered in a huge first-moto crash at Thunder Valley (right after he went 1-1 the previous week, of course) flared up during the week, and severely hurt his chances at the Red Bull RedBud National. He went sixth overall with 4-6 finishes, handing the points lead over to Martin. The always-friendly Marvin talked to us about it after the race.

Racer X: How was it?
Marvin Musquin: It was not good. It could have been a lot worse because I hurt my wrist again this week. So since Lakewood I’ve been dealing with a stretched ligament and a bruise on the bone. It’s been tough in practice. I’ve had good days at practice and then bad days every time I would tweak the wrist. But I’ve been dealing with it and on race day it’s been really good. But this week I hurt it again and it’s been painful. I thought it was going to be okay and actually beginning of the motos I was actually happy and I had strength on my hand but then it was getting worse and worse, especially on those downhills. Every time off the gas I put pressure on my hand and then it would hurt the bone on top. Acceleration, pulling, doing wheelie off the rollers, it was actually good. But every time I was off the gas, I couldn’t really do whatever I want with the handlebar, put the bike wherever I want. So it was so frustrating and mentally it was tough. It was painful. It was hard to get passed by riders and also knowing Jeremy [Martin] did good today. But it’s not the end of the world. We try our best every time and we’re going to try to get better.

And your speed was good. At the beginning of the motos you and Jeremy finally got to battle. You even made some passes. It was looking good for a while.
Yeah, I was happy. I passed Jeremy. I was actually feeling good and then I started to ride a little bit tighter and my wrist started to hurt. So then I was starting to get bad lines and stuff. I was actually going a little bit backwards and then I had a crash. So it made my life really tough today, but, you know, maybe only James Stewart and Ricky Carmichael won 24 motos in a year. Things are going to happen. But right now it’s good racing. There’s good riders. We all work really hard. So it’s interesting and it’s hard.

Tough week for the Bakery [Aldon Baker’s] 250 riders. Guys in and out of condition.
Actually I couldn't ride on Thursday so I didn’t see Adam [Cianciarulo] when he went down.

Because your wrist was already hurting at that point?
Yes. I hurt it on Tuesday. But it sucks for him. He is a young kid and doing better and better.