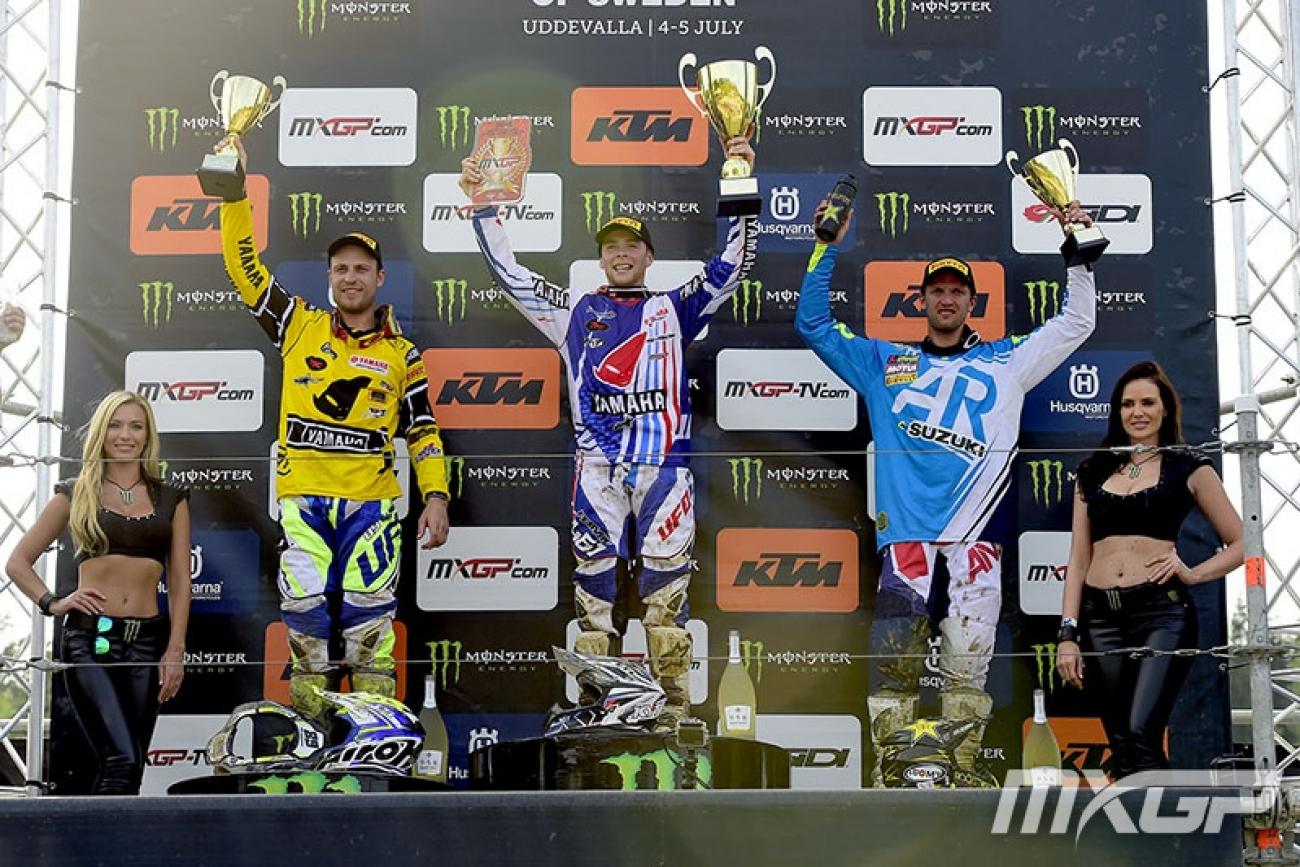 Yamaha Factory Racing Yamalube’s Romain Febvre is the real deal. Anybody who can win four MXGP events in a row and forge a 39 point lead over Tony Cairoli while dealing fearlessly over some of the bumpiest, slickest hard-pack seen in the 2015 series has to be respected. The 23-year-old might be an MXGP rookie and there will be some observers that point to the absence or lack of fitness of his rivals, but Febvre has only suffered two noticeable crashes in the eleven Grand Prix and twenty two motos of the season so far; hardly the wild-child poised for a “big one” at any moment, as a healthy section of the paddock would like to speculate.

Febvre was masterful again in Sweden. The Uddevalla facility frankly baffled the riding fraternity through the circuit staff’s insistence of throwing water onto hard-pack in between motos and having done little in the way of preparation of the soil prior to the event. It made for treacherous conditions and hardly any of the racers were able to retaliate from a less than ideal start. France’s new star went 1-1 through an escape in the first moto ahead of teammate Jeremy Van Horebeek for a dream Yamaha result (particularly when paired with Justin Barcia’s and Jeremy Martin and Cooper Webb’s success at RedBud) and then his stalk-and-mugging of Rockstar Suzuki’s Kevin Strijbos three laps from the end of the second moto was an alternative display of efficiency and confidence.

Strijbos’ 8-2 was an example of how Uddevalla could frustrate and reward. The Belgian ran off the track on the second corner of the first moto, then crashed and struggled to gain time and positions. The 29-year-old had set off from Pole Position and had steam coming out of his ears between the motos—and not through the generous summer temperatures in Sweden. He let Febvre enjoy his holeshot for a matter of seconds at the launch of the second moto and the pair broke free with the luxury of an open track ahead.

Strijbos was still able to fill third spot for his third podium on the bounce after recovering from wrist and thumb injuries and placed behind a visibly moved Van Horebeek who confessed the pressure and expectation of following up his 2014 breakthrough term had been responsible for the delay in bagging some silverware by round eleven.

Red Bull IceOne Husqvarna’s Max Nagl did not embark on the trip to Sweden. He tried to ride his FC450 in the week, and then came the painful decision that his ankle fracture was not up to keeping him in the championship chase. With the Latvian GP only seven days after the Swedish meeting then three rounds without points means that the German is effectively—and sadly—out of contention. Rockstar Suzuki’s Clement Desalle also didn't travel having received medical advice that his left MCL is not strong enough for racing. The Belgian was still the fulcrum of intense rumours about a switch to the works Monster Energy Kawasaki team for 2016 with the weight of opinion leading to him leaving the Suzuki camp after a stint that stretches back to 2010.

Red Bull KTM’s Tony Cairoli did make the start line in Sweden but the fracture around the champion’s left elbow is causing a lot of pain when the Sicilian has to straighten his arm. The sport is watching an eight times world champion fiercely cling to the hopes of a ninth crown and if 222 achieves the feat by the end of the season then it will surely be his best and hardest won accolade of a glittering career. His third place in the second moto was courageous stuff and if Cairoli can minimise Febvre’s “effect” in the coming rounds then he can attack through the three sandy events in the month of August on a surface where the KTM rider really has little in the way of peer.

There was frustration for HRC duo Evgeny Bobryshev and Gautier Paulin. Poor starts reduced them to bystanders in the second moto, and crashes by each in the first race cost Paulin positions and forced a first DNF of the season for the Russian and the loss of second position as he fell at slow speed and broke his clutch. Honda were actually able to chart the progress of another Russian, J-Tech Honda’s Vsevolod Brylyakov (full marks for correct pronunciation) as the youngster marked a career-best with four overall in MX2.

Hitachi Construction Machinery Revo KTM’s Shaun Simpson breached the top three for the first time in 2015 in the first moto after a remarkable first lap where he pulled from mid-pack to fifth and then passed Wilvo Nestaan Husqvarna’s Dean Ferris after benefitting from Borbryshev’s bounce. The Scot couldn't repeat the act in the second moto and a malfunctioning rear brake and a tumble cast him down to tenth and sixth overall, behind the sprightly Ferris in fourth and Nagl’s Husqvarna teammate Todd Waters in fifth (two Aussies in the top five no less).

In MX2 Red Bull KTM’s Jeffrey Herlings had two unbelievable motos. The first through his effort and courage to post a fourteenth victory of the year ahead of HRC Gariboldi’s Tim Gajser less than two weeks after suffering a clean fracture to his right collarbone. The second through another crash at the start of a race and a fresh injury with a grisly dislocation of his left pinkie finger and broken skin showing down to the bone. The Dutchman rode back to the start gate, dropped the works 250SX-F and ran down to pit lane holding his mangled digits. The latest report from the hospital was that the finger had been straightened and stitches inserted. He was lucky to escape a fracture and serious nerve damage. On the track Gajser needed no prompting to record his third straight GP win and cut another 25-point chunk from Herlings margin at the top of the standings. A lead that at one stage stood at more than 130 points is now down to 78 with a “light” version of 2014 starting to happen all over again for the KTM man. It is impossible to say whether Herlings will contest the Grand Prix of Latvia this coming weekend but it seems unlikely. If absent and Gajser takes full profit then the title chase becomes curious indeed and Herlings will have to look towards the sand—Grands Prix in Belgium (Lommel), Italy (Mantova) and Holland (Assen) in August to be at his fittest and fastest to try and wrestle some form of control back on this series and his desperate attempt for MX2 crown number three.

As a potential subplot there was talk in Sweden this weekend that the 20-year-old would be making a call on MX2 or MXGP for 2016 before the trip to Kegums. How will this latest injury affect that decision-process?

Jordi Tixier, bound for Tyla Rattray’s factory Kawasaki seat in MXGP for the next two seasons (the South African has already announced his retirement at the end of 2015), has signalled his intentions for his future, but back in the present the world champion lost the chance of a sixth podium with a second DNF from the last six motos, this one caused by a broken exhaust.

Switzerland’s chances for a record-best Motocross of Nations result are looking stronger than ever this year and for the first time in Grand Prix history two riders from the country finished on the podium with Standing Construct Yamaha’s Valentin Guillod in second and Rockstar Suzuki Jeremy Seewer third. If Pro Circuit’s Arnaud Tonus gets up to fitness, watch out at Ernee in September.

Thomas Covington is still looking for the early season fire that propelled the youngster into semi-regular top five contention and in Sweden a lack of feeling on the terrain cast him outside the top fifteen. Due to his age and potential Covington is a sought-after prospect for 2016 and has already courted the attention of at least two manufacturers. Expect a press release in the coming weeks on his destination and a third possible term in Grand Prix where he will be expected to deliver the goods next year.

And Ryan Villopoto? Rumours have intensified that the American is packing his bag for a walk into the sunset and Grand Prix is unlikely to see him again in 2015. There is still no official word on his fitness or his status so he could very well turn up in Latvia next week (which would be only his second MXGP appearance in Europe this year) in an ambassador role but that’s a highly remote chance. Monster Energy KRT could already turn to former rider and 2014 Nations winner Steven Frossard to fill the vacant KX450F saddle after the Frenchman mutually parted ways with his British Wilvo Forkrent KTM team on the eve of the Swedish event.

The 2014 Motocross of Nations site, Kegums, is up next as MXGP moves across the continent for the Grand Prix of Latvia next week.