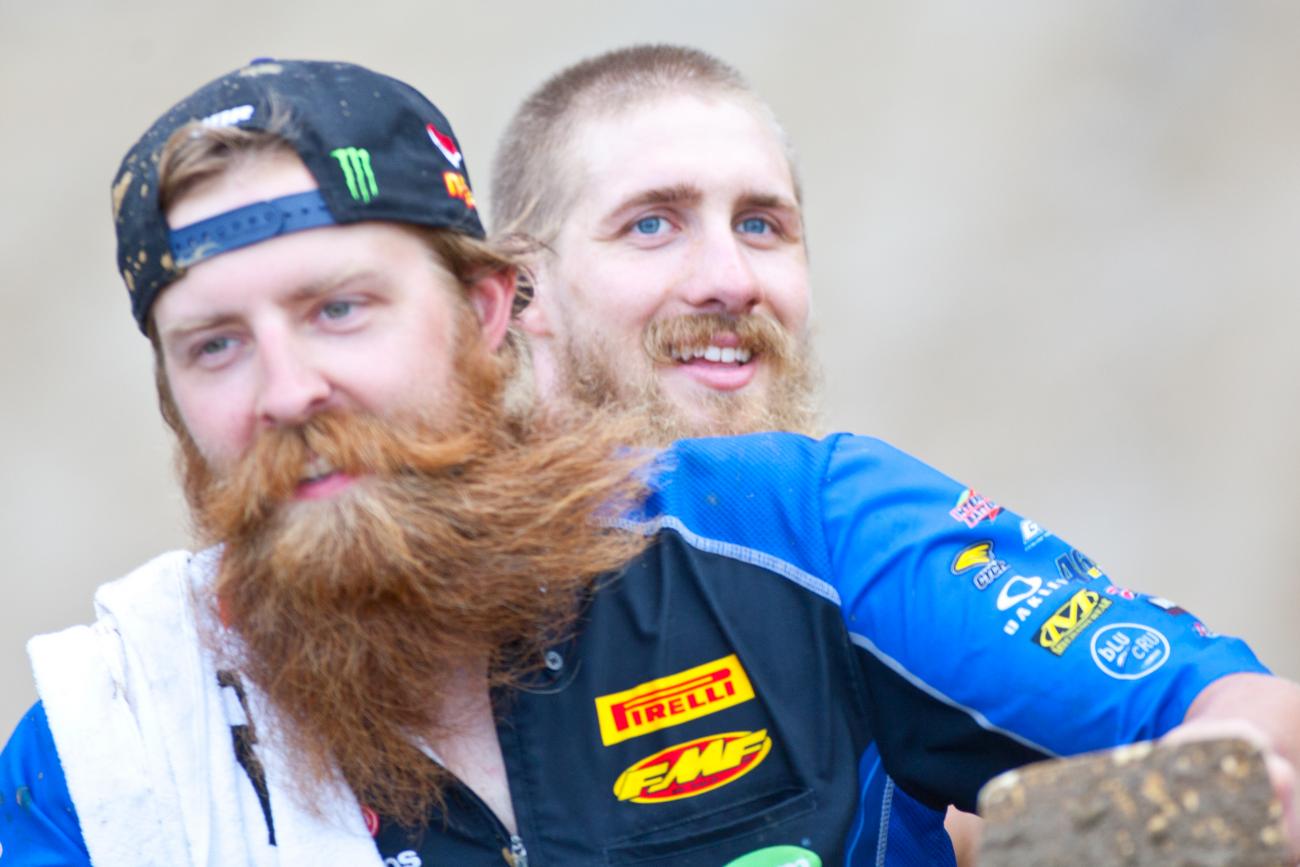 On a Saturday afternoon that many wanted to already be over, Justin Barcia was adamant that everyone go back to the starting gate for the final 450 Class moto at Budds Creek—Budds River by then. While some seemed to be dreading going back out for thirty-plus-two on a radically changed racetrack, Barcia had a smile so big that you could even see it through his epic beard.

As you probably saw or heard, a severe weather system arrived at the GEICO Motorcycle Budds Creek National just as the second 250 Class moto was coming to its conclusion. The online weather radar showed growing swaths of yellow zones, turning into orange, then maroon, and ultimately fire-engine red—if you found out that the apocalypse were coming straight at you, it would probably look just like that on your screen. The last moto was delayed, people were told to evacuate the facility and take shelter, and as the storm hit, it really seemed like it was going to drown out the second moto, just as we saw happen at Hangtown in 1991.

Yet in the middle of this tempest was Barcia (not to mention Yoshimura Suzuki rider Blake Baggett and RCH Racing’s Kyle Bentley) and he wanted everyone to know that he wanted to race. It was like Jeff Emig in the scorching heat of Kenworthy’s 1997, going to the starting line in all black Shift MX gear, no umbrella for shade, helmet strapped on to let the rest of the guys on the gate know that the heat would not be an issue for him. That race was practically over before it even started.

For Barcia, it wasn’t quite as simple. Rockstar Energy Racing Husqvarna’s Christophe Pourcel also likes the mud, and anyone who saw Ken Roczen blitz the Ironman mudder last year knows that he doesn’t mind the wet stuff either. Yet the moment the race started and Barcia flashed to the front, it was plain to see that he was out there riding for fun—he was practically hooping and hollering off jumps, sometimes at lappers, other times at the surviving crowd along the fences that had picked up on his enthusiasm and screamed and shouted for him.

In the end Barcia won by maybe forty seconds, but he may have won more than just a mud race. Toward the end he was doing one-handers and no-footers, and just rode like someone without a care in the world. And after the checkered flag he roosted everyone around the podium with a big, fat spinning donut. His smile was even more visible under that mud-caked beard.

It was all reminiscent of Damon Bradshaw’s unlikely 1997 High Point National win, when a southern boy on a private team (Manchester Honda in Damon’s case) just went out and rode the wheels off his bike in the slop, not because he had to but because he wanted to. It was Damon’s first and only win on a brand other than the Yamahas he grew up on, just as this was Barcia’s first win on a brand other than the Hondas he grew up on. Bradshaw’s ’97 revitalizing win came toward the end of a seemingly star-crossed career. Barcia’s ’15 Budds Creek win came at what has seemed like something of a mid-career crisis in finding the right measure of training, coaching, testing, whatever. Now he and his mechanic Ben Schiermeyer, riding coach Buddy Antunez, team manager Jeremy Albrecht, and owner Coy Gibbs—all of whom were there getting roosted by him in the winner’s circle—have something to build on moving forward, and the fans who stuck around have something to never forget.