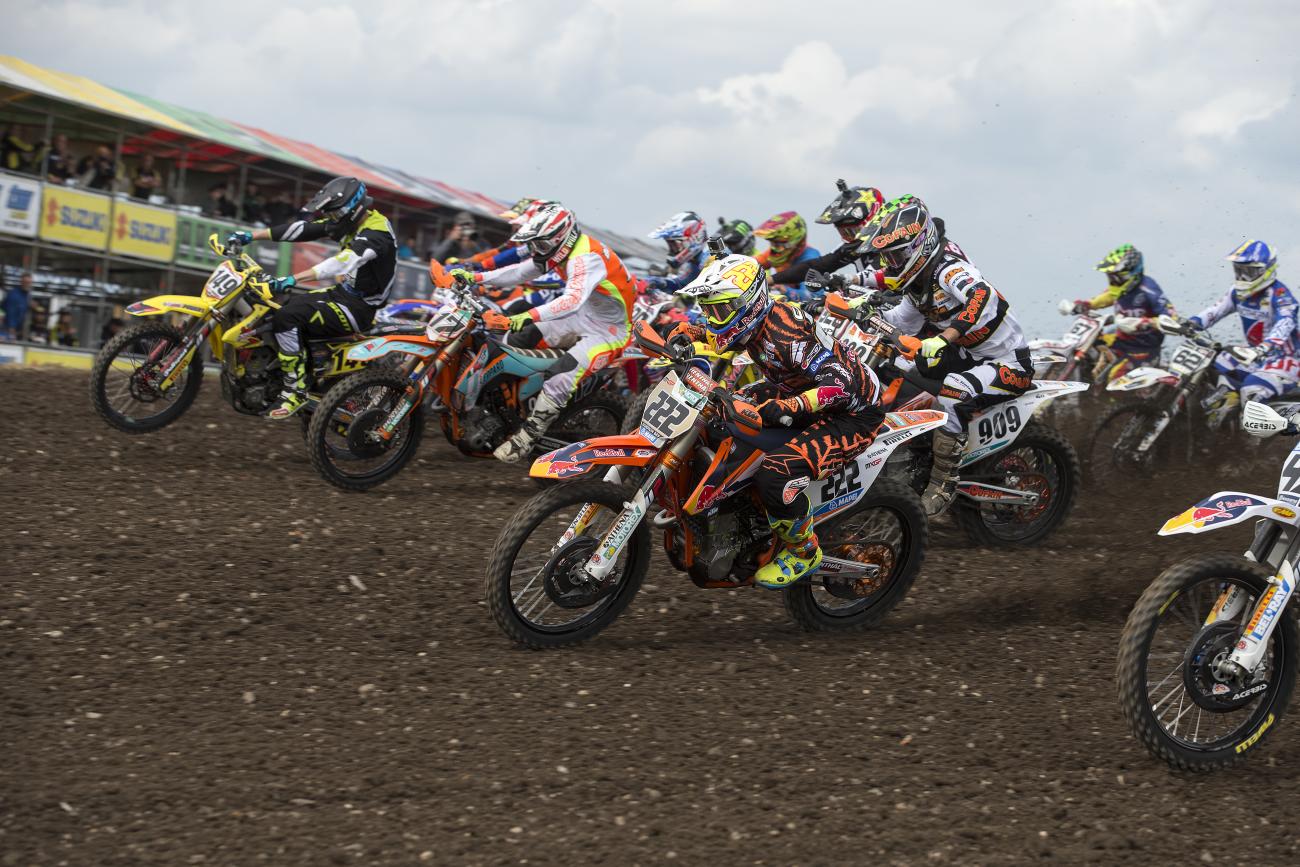 The second half of the 2015 FIM Motocross World Championship started in unpredictable fashion and continued with a prevalent theme by chucking up more surprises. Round ten of eighteen, the Grand Prix of Germany, played out on a battled-scarred and brutal hard-pack that varied in grip levels and largely served to frustrate the riders, particularly through random and ill-advised watering. It could be a turning point in the MXGP and MX2 stories.

Red Bull IceOne Husqvarna’s Max Nagl sustained an ankle injury in Saturday’s qualification heat when he made contact with Gautier Paulin. However, there is no word on how severe the damage actually is. Husqvarna tried to downplay the ailment on its website describing it as a “fractured ankle” that needed “minor surgery,” but variations on the diagnosis in the paddock went from a broken tibia to a small fracture of the upper foot.

Nagl was set to star in front of home fans at the venue where he wore #1 plate at the Motocross of Nations two years ago, but instead he watched a 30-point lead erode to a 9-point deficit to Yamaha’s MXGP rookie Romain Febvre (who now has three straight wins and is leading a world championship for the first time in his career).

Nagl had carefully forged that points lead and owned the red plate for the last five Grands Prix. On Saturday night after his crash, there was a chance that Nagl could lose control of his lead for only the second time in 2015. The biggest question mark will now be on his period of convalescence. He has two weeks to get back on the bike before back-to-back rounds in Sweden and Latvia.

Red Bull KTM’s Jeffrey Herlings is in a similar position. In the opening seconds of the first MX2 moto, the Dutchman appeared to scrub the steep uphill climb—the same jump that claimed Eil Tomac at the Motocross of Nations—in a similar accident, resulting in a cracked collarbone. Herlings is expected to have the collarbone plated immediately to speed up another GP return, and to seize what has so far been a difficult third title attempt.

HRC Gariboldi’s Tim Gajser went 1-2 in Herlings’ absence for his second win in a row, third of the season, and first outside of Italian borders. The 47-point haul snipped Herlings’ advantage down to 100. That’s still a sizeable gap, but #84 is reducing his margin for further error and therefore hiking up the pressure. In an interview Saturday night, he stated he was dissatisfied with his form and win rate in 2015 (just four of ten) even if the championship picture looked rosy. Herlings will have to resolve this inner conflict and regain some confidence to reaffirm his position as one of the fastest and the best in GP at only 20 years old.

Over at the Yamaha pit, it ‘s remarkable how Febvre is taking the adulation and results in stride. Team manager Michele Rinaldi has commented how the Frenchman’s ability to block every other rider out of his mind and not bear any pressure is his standout characteristic. And Rinaldi is a man who helped guide Stefan Everts to six of his ten titles. Febvre was again irrepressible in the first moto for his fourth opening-moto win in as many GPs; owning 50 percent of the last eight motos. HRC’s Gautier Paulin was also impressive, winning the second moto for his first triumph since round four in Holland. Febvre fought hard, but the Yamaha rider dislodged his goggle lens and was blinded by the dust.

Credit to Wilvo Nestaan Husqvarna’s Dean Ferris–allegedly running Tony Cairoli’s 350 factory engine in his FC–who repeated his 2013 Motocross of Nations holeshot and was one of four riders in contention for the final podium spot. The final podium position was decided on the last lap when Rockstar Suzuki’s Kevin Strijbos edged the Australian for third place after a bar-banging duel. HRC’s Evgeny Bobryshev was just behind Febvre in the first moto, but fell off through the first corner of the second and barrelled back to seventh place to tie in points. Febvre’s teammate, Jeremy Van Horebeek, would have lifted his first podium trophy of 2015 if he hadn’t also crashed early in the moto.

Tony Cairoli is still riding with two small fractures in his left hand and accumulating points that he knows will keep him in the game. The Red Bull KTM rider, watched by Roger DeCoster in Europe for business and personal reasons, started the weekend 30 points down on Nagl and ended it 17 back of Febvre—quite a good return in the circumstances. Drawing on experiences of the past half-decade, it’s hard not to believe that Cairoli will somehow find another gear once he gets fit again. It will be a question of who will go with the Sicilian, but for now events have tightened the MXGP saga considerably.

Behind Cairoli, Paulin, 3-1 on the day, is just 45 back of the leader despite being consistent yet unspectacular. “I’ve only had one DNF—in France when I was second—and there is still 400 points to win,” he said. “I’m healthy and it is great to be back, and when I have speed like this it is a joy to be on the bike. Let’s see what the rest of the GPs will bring.”

In the MX2 class, Standing Construct Yamaha’s Valentin Guillod raced with four broken metacarpals in his right foot and hit the gate at the start of the second moto, but the Swiss finished third. He stands a point behind Tim Gajser in the standings. Monster Energy DRT Kawasaki’s Max Anstie won the second race with some style, earning a well-overdue holeshot, and pulling clear of Gajser. Wilvo Nestaan’s Alex Tonkov made a shocking departure from the competition. The Russian duked with Gajser in the formative stages of the first race and was ejected off the track and onto his right shoulder, dislocating his shoulder. There was a hefty delay to have the limb reinserted.

Teutschenthal held five divisions through the weekend, including EMX150, EMX250, and WMX classes, and again people were grumbling about the effects the amount of racing had on the soil. Not only is maintenance time reduced, but Grand Prix riders claim the bumps and edges are different and more unsettling as a consequence of three extra divisions all drilling the terrain.

There was also talk about the potential harm of racing 450cc machinery in MXGP and in the U.S. There does seem to be more strong beliefs across the board—federation, brands, promoters—compared to similar talks in 2008-2009. One rider commented on Sunday night that efficient track preparation would also be an effective safety measure and improvement, rather than worrying about engine size.

From the support card, reigning EMX250 Champion Steven Clarke posted his first win of 2015 after the having his race bikes stolen in Holland. The feeder series to Grand Prix keeps swinging between protagonists, with an engine stall for Kemea Yamaha’s Damon Graulus and crash while leading for Wilvo Forkrent KTM’s Adam Sterry (who also caught metal fencing in his rear wheel). Four riders sit within 9 points of each other with four rounds remaining.

Teenage sensation Brian Hsu made the podium for the first time on the Rockstar Suzuki. In WMX, Kiara Fontanesi beat main title rival Livia Lancelot twice to set up a mouth-watering finale at the Czech Republic next month, with just two points between the Yamaha and Kawasaki athletes.

For the key players in MXGP, a free weekend is rarely more warmly welcomed. The one week break before the Grand Prix of Sweden is bound to be used for intensive R&R, although some others will be moving forward. Febvre will be participatng in yet another two-day Yamaha test before visiting the MotoGP at Assen in Holland.