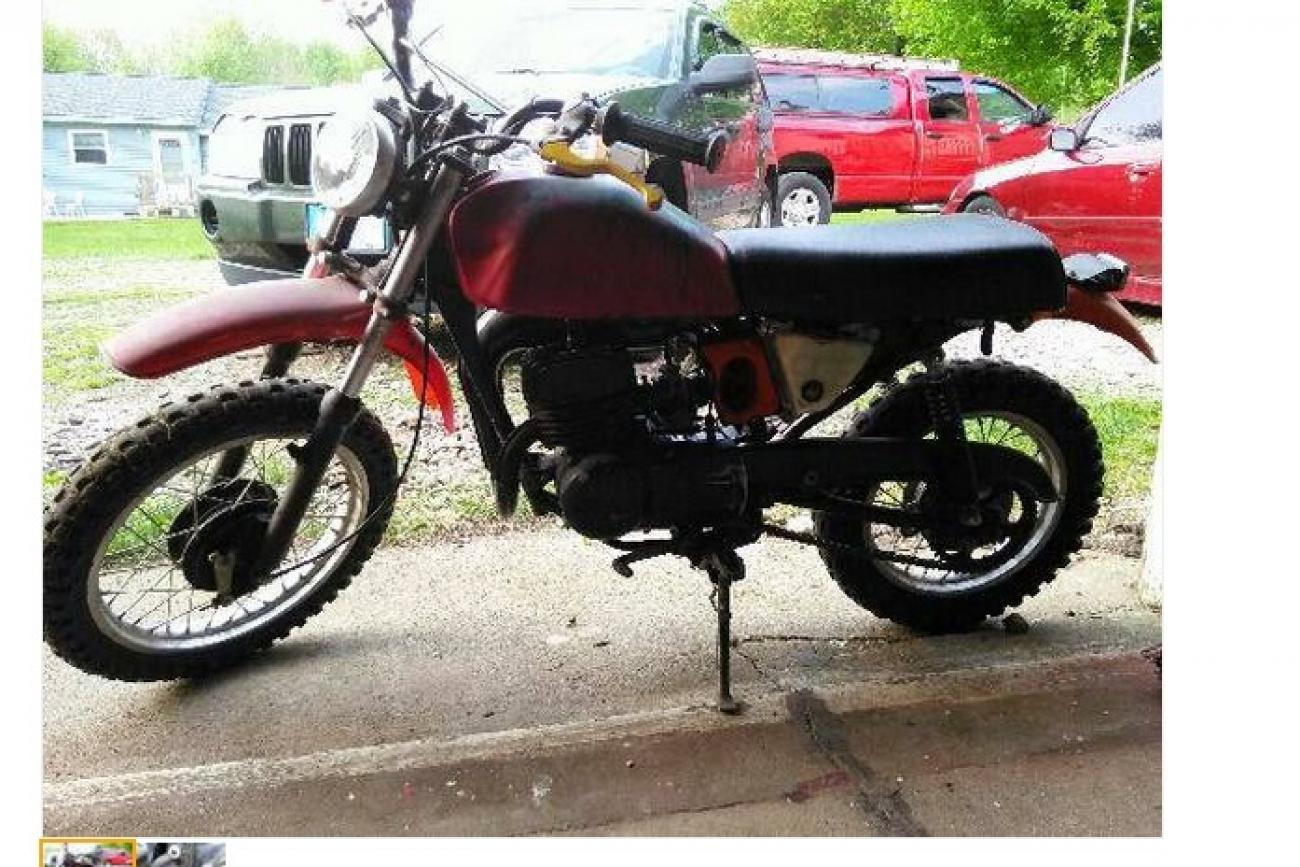 Welcome back to yet another edition of Classic-Fieds, the column that showcases some of the nuttiest and most eccentric ads on Craigslist. Enjoy, and if you come across an ad you think would be good for this column, package it up and ship it to aaron@racerxonline.com.

We’re guessing the seller isn’t great with numbers. The first clue? Claiming the bike is “worth at least 6000 once it runs.” Nope, absolutely not. Even 6,000 pesos—which is roughly US$390—wouldn’t be a fair price for this chunk of vintage rust. The second clue is the claim of a 650cc engine. He’s actually partially right, but not about engine size. If you click on the ad and look at the second picture, you’ll see a small sticker on the crankcase that says 650cc. That number (which is right next to the oil filler cap) is of course referring to crankcase oil quantity, not engine displacement. Did you really think this tiny little kids bike came with an engine big enough to tow a fishing boat?!

The seller goes on to reveal his utter lack of two-wheeled understanding by calling this a “super fast bike.” The only thing this bike is super-fast in comparison to is the haste in which the James Stewart situation was handled by WADA.

The seller says the bike won’t run because there’s no gas getting to the fuel line. Normally, you’d think that was a lie, because if it were something as simple as a clogged fuel filter or simply being out of gas, they’d have fixed it already. But, considering he thinks this DS80 has a 650cc engine, is worth $6,000, and someone will trade him a truck for it, he might actually be too dumb to consider those simple solutions. In other words, this little liquor store ripper could be a quick fix, provided you can pick it up for under 6,000 pesos.

Three (Wheels) is the New Black

For the longest time it seemed we couldn’t run this column without having something that’d been rattle-canned black. Not because we were searching it out, but because it seems to be the color of choice for people selling worthless piles of debris that used to be motorcycles. Whether that’s because the Craigslist minions think trashed plastic dripping with cheap black paint looks cool, or they just want their machines to be the color of their souls, we’re not sure. Anyway, the next evil trend we spotted was bikes being turned into three-wheelers, but this particular vehicle takes the stereotypical Craigslist cake—it’s a three-wheeled conversion that’s also been sprayed black! This is as stereotypical as a reggae-loving disc golfer who wears flip-flops and board shorts all the time, eats granola bars, and gets busted for firing up a doobie in his hotel room (not that I know any of those dudes).

Of course, at least the disc golfer has fun, something you’ll never have with this stack of metal poisoning. Check out the frame rail going to the back wheel. Is that the front of a trailer that’s been flipped around backward and modified to hold a motorcycle wheel? Then there are the low-profile tires up front, which will at least transmit so much numbing vibration that you won’t feel a thing when something inevitably snaps, sending your ass sliding down the road. The seller says it’s a “great project…just needs fishing.” Pretty sure that’s not a typo—he means they’ll have to fish you out of the wreckage your marriage will become if you’re stupid enough to bring this thing home.

This murderous hunk of sagging metal reminds us of that song, “Dirty Deeds Done Dirt Cheap.” But instead of calling AC/DC, you can just pay a social call to whoever’s giving you the blues and convince them to take this puppy out for a spin—no way he lives more than ten minutes on the open road in this death machine. And at the seller’s asking price of just a buck, that’s definitely a dirty deed done cheap.

If you’re looking to eliminate pedaling, it seems like there would be easier ways to do it than mounting what looks like an oversize vintage helmet cam on the front wheel of a bicycle that’s older than long travel and liquid cooling. Just think how front and top heavy this thing must be. Riding around town would be like playing a game of chess—you’d have to have your moves planned several turns in advance. And even then it probably wouldn’t be enough to prevent you from getting whacked by a texting driver.

Of course, finding yourself wedged between the road and the greasy oil pan of a tired Chevy wouldn’t be nearly as painful as talking to the seller. Just check out the sales pitch below. If he’s that wordy in his Craigslist ad I’d rather pierce the webbings of my hands and feet with dull spokes than get stuck in an actual conversation with this guy.

made in Japan by Tanaka. It's a two-cycle engine and has lots of compression

will quit running after an hour of use. The motor is quiet when moving

and on level ground it gets you rolling along pretty dang fast.

You do have to be a rather coordinated person

to ride the bike though. You start off pedaling and then have to reach down

and throw a lever that lowers the drive wheel on top of the front tire.

Then you have to keep pedaling, watch out for cars, adjust the choke,

and operate the throttle until you get the engine warm and running on it's own.

or stop it. If you are going really slow the engine will quit running until

you pedal it back up to running speed again. On uphills you have to help out

by pedaling a little too. I originally bought the thing and wanted to put it on a better

bike. The bicycle the motor is mounted on is just an old inexpensive bike and it's heavy

and geared to tall for easy pedaling. There are interest / support groups for

Tanaka motors and parts can be easily obtained for it. I also have a short video

clip of the engine running in the garage. If you would like to see the vid,

just shoot me your email address.

The seller mentions there are support groups for owners of Tanaka motors. That’s good because anyone who gets cornered in this long-winded fellow’s garage is going to need more outside help than Seth Enslow’s aim.