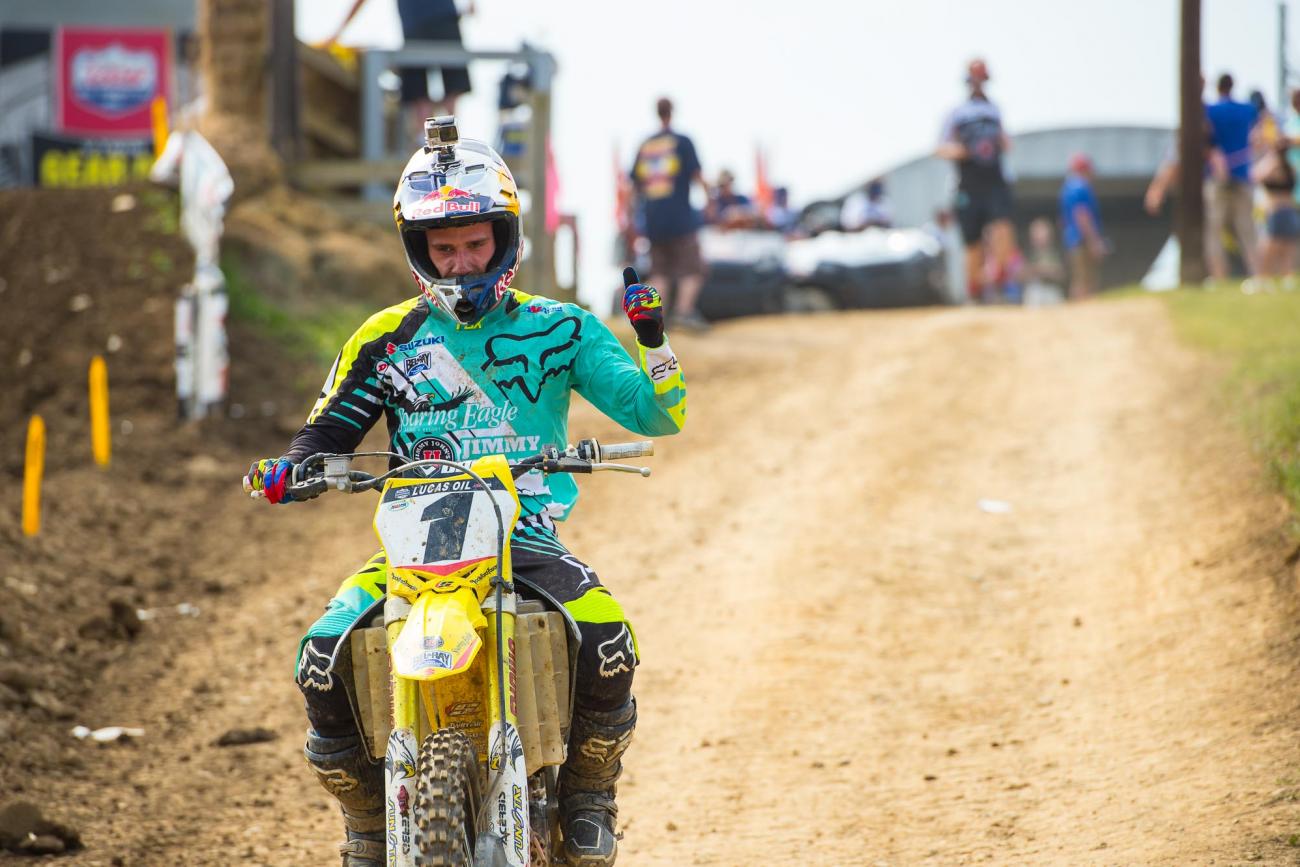 Ryan Dungey didn’t win the overall on Saturday, but he accomplished a more important goal: staying even on points with championship rival Ken Roczen. Dungey rocketed to the front early in the first moto, riding maybe the best moto of his professional career, before stalking Roczen the entire second moto. The gap eventually reached six seconds, but don’t be fooled by the numbers, the margin didn’t stretch past three for nearly the entire race.

“We came about four laps to go and a lapper got between us—no excuses though—and I lost a little bit of time and I gave him what he needed to seal the deal,” Dungey said in the post-race press conference. “Overall, I was really happy with both motos.”

Roczen, who can’t be happy not picking up points despite winning the overall, can surly take away confidence from holding Dungey at bay for such a long period. “I knew he (Dungey) was there, I kind of peeked over going around the turn and I had a little bit of time,” said Roczen in the post-race press conference. “I had a little bit of time, but I was ready to go again.” Roczen, like Dungey, also had to deal with lappers down the stretch. “I had a couple people there that went in the line I normally went, and kind of messed me up. We all struggle with it.” The win was the first overall for Roczen on the young season.

Jason Anderson continues to impress. The rookie now has three moto podiums through ten motos and took over third in points—two ahead of Justin Barcia. Anderson, who struggled with consistency in the 250 Class outdoors, credited his move to Florida for his success on the east coast this year. “I’m a west coast guy and when we would come to tracks with ruts, it’s not my deal,” he said in the post-race press conference. “I grew up on flat, blue groove stuff.”

Justin Barcia got pushed back to fifth overall by the Rockstar Husqvarna duo of Anderson and Christophe Pourcel despite going 5-4 and leading two laps in the first moto. His crash in the first moto after coming up short on the giant uphill was his undoing, as he was running in a podium position. Barica was the top JGR rider on the day, besting Weston Peick (seventh overall) and Phil Nicoletti (thirteenth overall).

It was another lost season due to injury for Wil Hahn in Monster Energy Supercross, but the factory Kawasaki rider is starting to find his form outdoors. Many forget, but this is actually Hahn’s first year in the big class in Lucas Oil Pro Motocross. Hahn qualified eleventh and rode to his first top ten of the season, ninth overall.

High Point underwent significant track changes this season, using more of the natural elevation rather than cutting across the track. Duney, like most riders, acknowledged that he liked the changes. “It was good to see improvement,” said Dungey. “Sometimes when they do that it’s not always the greatest, sometimes they go backwards. I think they found themselves a nice layout, and one that’s good for racing, in my opinion.”

Blake Baggett dropped to fifth overall in the point standings following a DNF in moto one. Baggett’s front fork broke leading to a thirty-fourth place finish. He finished eleventh in the second moto for sixteenth overall. He trails Jason Anderson by five points for third.

Starts. Starts. Starts. Jeremy Martin is probably left wondering what could have been after a day in which, at points, he was the fastest on the track, only lead to third overall (4-4) due to consecutive bad starts. “It was a rough weekend,” said Martin in the post-race press conference. “Marvin knows what the speeds like, and that’s what it is.”

Speaking of Musquin, the Frenchmen carved the pristine hillside en route to a nearly flawless 1-1 finish and holds an eight point lead heading into the off week. “Obviously, when you go 1-1 it’s a perfect day,” said Musquin. “We got some good rain yesterday, so it made the track really good. Also, they did a great job with the track.”

Zach Osborne rebounded from a disappointing Muddy Creek—his home race—to claim second overall, including his second moto podium this season. “I’ve just been a little inconsistent,” said Osborne. “I feel like we can cut that down a little bit. I should be top five every time I hit the track.”

Adam Cianciarulo, who was second in the first moto, got off to a bad start in moto two, then got "t-boned" and couldn’t make his way through the field, finishing twelfth. He finished fifth overall on the day.