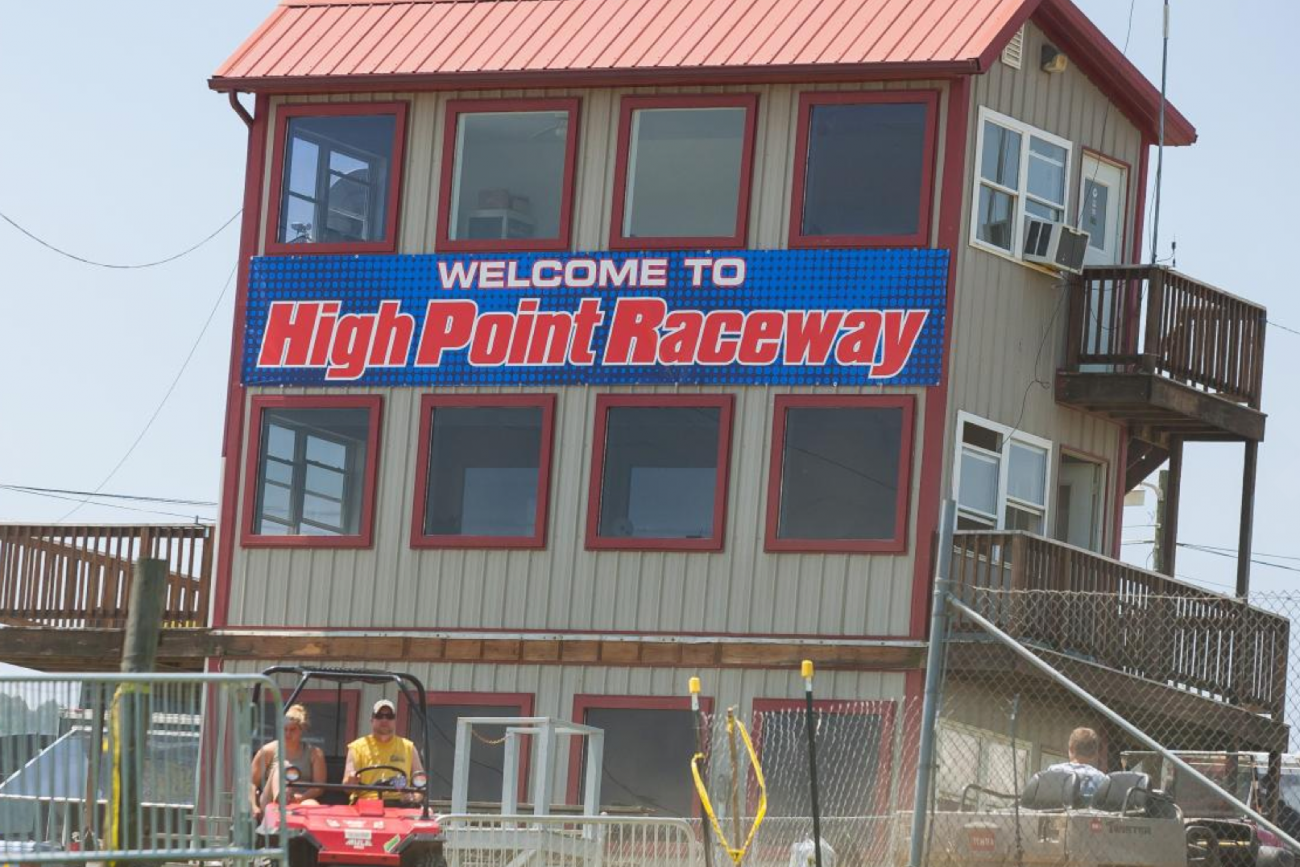 Welcome to the High Point National Race Day Feed. We'll be updating the feed as the day progresses, so keep checking back for the latest news as the racing action unfolds.

Ryan Dungey never really lost sight of the lead. He never really got close enough, either. The margin never reached more than three seconds until the final lap, but control never looked lost, either. Ken Roczen keep his distance—at points stringing together insane lap times—never letting Dungey launch into an attack in the second moto at High Point to claim the overall via 2-1 scores. Dungey finished second overall (1-2), but more importantly tied in points with Roczen, staying thirty-seven ahead through five rounds.

Christophe Pourcel was again up front early, clipping Justin Barcia for the MotoSport.com Holeshot. Pourcel made an early mistake, dropping spots to Dungey and Barcia and eventually his teammate Jason Anderson. The rookie, Anderson, eventually worked past Barcia into third, claiming his third moto podium on the young season. Barcia, unlike the first moto where he jumped off the track, keep his forward momentum going, finishing fourth in the moto.

Pourcel would hang on for fifth, with Weston Peick, Phil Nicoletti, Broc Tickle, Wil Hahn and Cole Seely rounding out the top ten.

When the “keys to the race” section comes up on TV, typically in bright, bold letters near the top is: STARTS. It’s something we all know, but worth mentioning to the casual fan. Today was one of those days where it should have been bold, underlined and italicized.

Marvin Musquin got starts and went 1-1 for the 250MX overall, his first win at High Point since 2013 and left with the red plate. Jeremy Martin did not. Although he pushed to an overall podium with 4-4 scores, it could have been much, much better. For the second straight moto, the start was the demise of Martin. He came around lap 1 in nineteenth in the second moto at High Point, never able to relax as he charged all the way to fourth.

Musquin carried the same precise lines into moto 2, making the tough High Point track look like a playground. Zach Osborne made it tough early, but Musquin stretched his lead to over six seconds by the end. Osborne would hang on for third, while Joey Savatgy had to pick up the pace late to hold off the hard chagrining Jeremy Martin. Alex Martin just missed the overall podium after a fifth in moto 2. He tied in points with his brother Jeremy, but lost the tie-breaker (second moto finish).

Is this the best moto we’ve ever seen Ryan Dungey complete as a professional? Former pro David Vuillemin thinks so, writing on Twitter: “Dungey riding like Bubba is his A days... (Something I never thought I'd write) Impressive. Surprising. Awesome to watch.”

Dungey put on a clinic in the first moto, quickly striking from a sixth place start to take the early lead. Dungey, who typically is much more patient, wasted no time overtaking early leaders Christophe Pourcel and Justin Barcia. By the time Ken Roczen had worked his way past Pourcel for second, Dungey was already out to a 10.2 second lead. A lead he never relinquished.

Barcia nipped Pourcel for the holeshot and held second in the early running before coming up short on the uphill triple and going down. He would finish the moto fifth.

Pourcel, a previous winner in the 250 Class at High Point and fastest qualifier of the day, was very aggressive with Barcia early before falling behind Dungey, and then Roczen. He found his groove later in the race and stayed within a few seconds of Roczen, but never mounted a late challenge. He held on to third for his first ever 450MX moto podium. Jason Anderson, Barica, Broc Tickle, Cole Seely, Fredrik Noren, Justin Brayton and Wil Hahn rounded out the top ten.

We have a new points leader in 250MX. Marvin Musquin, who entered High Point six points back of Jeremy Martin, now holds a slim one-point lead after Martin fell short of the podium on the final lap to his older brother, Alex.

Musquin grabbed the MotoSport.com holeshot in front of a swarm of GEICO Honda riders. Adam Cianciarulo quickly moved into third behind RJ Hampshire and  looked poised to challenge Musquin for the lead. Hampshire, meanwhile, had other ideas. The rookie held his ground in the opening laps, allowing Musquin to pull a gap while he and Cianciarulo vied for second. Cianciarulo eventually got past, but never made a run at Musquin and finished 5.535 seconds back.

Jeremy Martin pushed all the way to fourth after a rounding the first lap in tenth, but came up less than a second shy of the podium, as his brother, Alex, held on for the final podium spot. Zach Osborne would round out the top five.

As it’s been for most of the 2015 Lucas Oil Pro Motocross Champion season, Marvin Musquin and Jeremy Martin were head of the 250 Class at High Point after qualifying. Of the 130 laps run this season, Martin and Musquin have led a combined 110. Martin, 59 laps led this season, and Musquin have split moto wins as well, each with four after eight motos. As a slight rain trickled over the track, Martin, looking to become the first Yamaham 250 Class winner at High Point since Chad Reed in 2002, took the fastest time in the second session with a 2:00.177. Unfortunately, it wasn’t quite enough to take the Bud Light fastest qualifier award. The honor belonged to Musquin and his 1:59.753 from the first session. The Pro Circuit duo of Adam Cianciarulo and Joey Savatgy followed with Christian Craig rounding out the top 5.

In two-stroke news, Gared Steinke qualified 30th overall on a YZ 125. Steinke, you may remember, won the Amsoil Arenacross finale in Las Vegas earlier this year. This is the first race he has tried to qualify for in 2015.

The rain continues to hold off as the first practice sessions wrap up from a cloudy High Point Raceway. The track was a tad muddy for the first session due to rain last night. If conditions continue to improve, times should be much better in the second sessions.

In 250MX, Marvin Musquin was the only rider to dip under the 2-minute mark, with a 1:59.753 topping the first session. Points leader Jeremy Martin was the meat in Pro Circuit sandwich, as Joey Savatgy and Adam Cianciarulo flanked the Star Racing rider. Each of their fastest times was in 2:01 range. Christian Craig seems 100 percent after battling a cold last week. We was fifth overall with teammate RJ Hampshire one spot back. Aaron Plessinger, Zach Osborne, Mitchell Oldenburg and Jordon Smith would round out the top ten.

Welcome to High Point Raceway and round 5 of Lucas Oil Pro Motocross. The track, located amongst the pristine hillside of Mount Morris, PA, has undergone arguably its most significant changes since Pennsylvania’s own Tony Distefano won in 1977. Track architect Randy Poulter and the promoters of the track have revamped the circuit to use the natural elevation and run the track high to low rather than diagonally. The idea was to make the track more technical and have a better flow. Thus far, the changes have received rave reviews from riders participating in press day on Thursday and amateur and WMX riders, which ran the track on Friday.

For the first time this season, weather could play a role. Heavy rain fell last night and more is expected today between 10 and 11 am, with a possibility of more thunderstorms returning later this evening. Conditions can change on the drop of a dime here, but it will be something to keep an eye on.

Through four rounds, Ryan Dungey currently holds a thirty-seven-point lead over Ken Roczen and is coming off an overall win at the Tennessee National last weekend.  The off-chamber’s that High Point is well known for could play to the advantage of Roczen, but if rain is a factor it may open the proceedings to anyone.

The points race is much tighter in 250MX as defending champion Jeremy Martin is just six points clear of Marvin Musquin. The racetrack plays to the technical style of Musquin, who won the overall here in 2013, but as we mentioned earlier, it could be wide open.