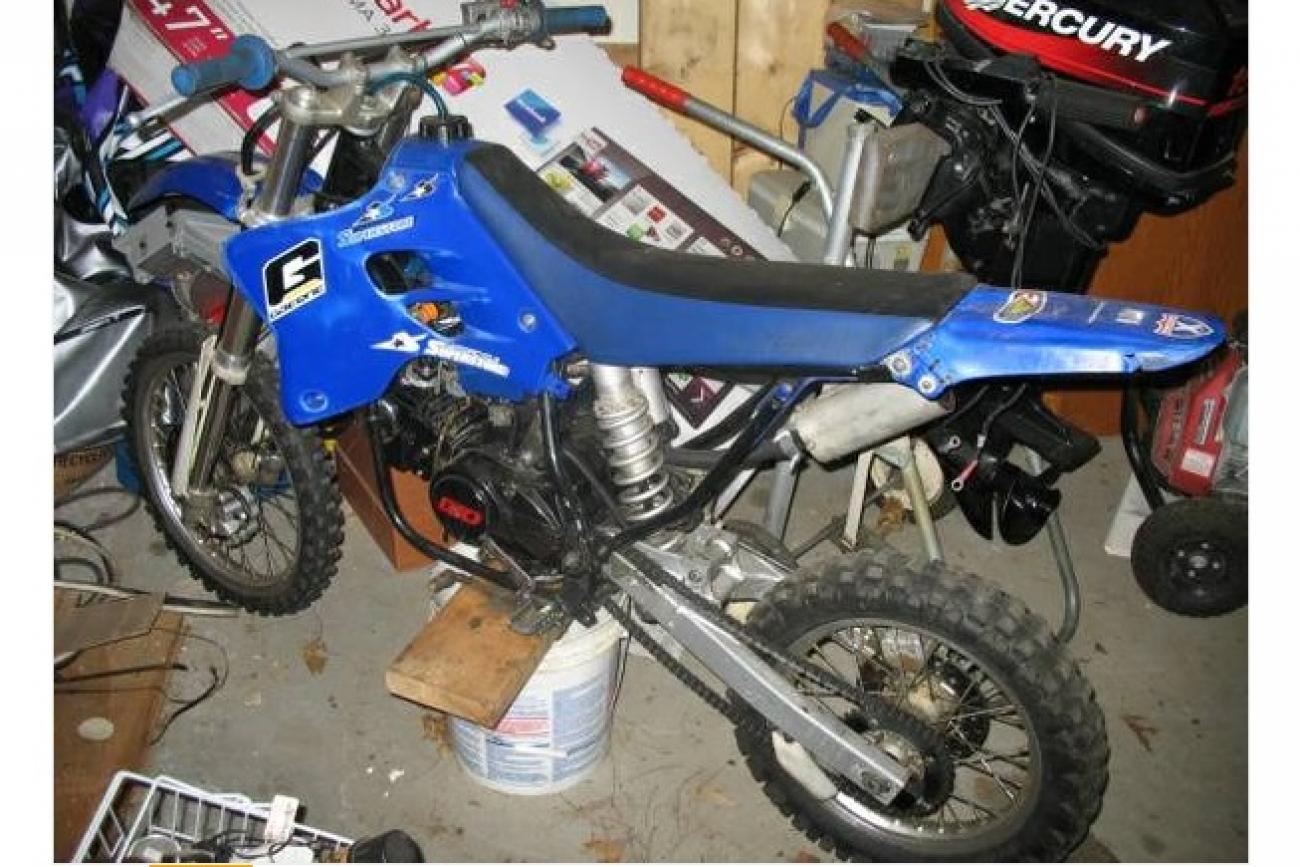 We’re not sure what’s up with our man Aaron Hansel, the regular author of this column. He may be sleep-deprived from taking care of his four-month-old son, he may have spent too much time looking at pictures of his old dirt bikes, he might just be loopy from the cold medicine he’s on right now, or maybe he’s just happy that for the first time in a long time, he didn’t have to write about any ridiculous trike conversions in this edition of Classic-Fieds. We’re not sure, but whatever it is, it’s caused him to trade in his keyboard-jabbing staccato of anger and insult for a different look at some of the most ridiculous ads on Craigslist. And, as always, if you’ve got an ad you think is worth featuring here, ship it to aaron@racerxonline.com.

Ahhh, big-bore two-strokes. I don’t know about you, but just the sight of an old one like this always triggers memories of heavy-duty loop-outs. In this particular case the first nightmare that comes to mind is from my pre-teen XR200 era. A couple of idiot buddies and I went trail riding, and long story short, one of the bikes broke down and had to be towed. I don’t remember why, but I ended up riding the KX500 home that my buddy had borrowed from his dad without permission while he towed the broken bike out with my XR. Completely unfamiliar with two-stroke power, I swung a leg over the green beast and took off. I still remember that initial feeling, and although I’ve never been aboard the Millennium Falcon, I’m pretty sure twisting that monster’s throttle was about the same as entering hyperspace.

Two minutes was all it took for me to get cocky, and when I came up on one of my favorite water-bar jumps, I knew exactly what to do. I whacked open the gas and, wham, that was it. The bike flew out from beneath me, with the pegs and grips easily freeing themselves of my feeble, pubescent (at best) grasp. Bike and rider cartwheeled like crazy, neither coming to rest on the trail without significant bruising and leaking of fluids. Somehow I managed to get the twisted bike started and nursed it back to my buddy’s house. Thankfully, his dad wasn’t home yet, and I leaned the bike against the garage, beat feet, and dodged my friend for the next month.

The next significant loop-out I can remember happened on my 1997 CR250R when I was in high school. My mom worked at the local elementary school, and at the end of every school year they would come up with a unique way of announcing the arrival of the school yearbooks. This particular year she thought it would be cool if they ran a fire drill, and while the kids were all lined up outside on the baseball field I would come flying up the side of the elevated field, launch through the air in front of the kids, ride over, and deliver some yearbooks from my backpack.

Everything happened according to plan, but as I was leaving I decided to be a cool guy and ride a wheelie across the blacktop on my way out. I’m still not sure what happened, but next thing you know I found myself on the receiving end of a third-gear wheelie gone wrong. As I took in the rapidly alternating ground-sky-ground-sky view that all dirt bikers know, I caught a glimpse of my bike sparking its way across the unforgiving blacktop. Surprisingly, the only casualties were a throttle tube and a severely damaged ego—nothing makes you feel more like a chump than looking up and seeing a bunch of fourth-graders laughing at you as your mom rushes over to make sure you’re all right.

I’m sure you’re expecting me to rip into this ad with a vengeance normally reserved for guys who push me to the outside when my wife is watching, and for good reason. After all, he claims his RM100 is a 550cc machine (that’s the oil capacity written on the side of the crankcase, not the engine size, you lug nut), is asking $1,000 for something worth less than a box of bent clutch levers, and has a hammer underneath the kickstand to keep the bike up. Really? You can’t find a block of wood or a stack of Guns and Ammo magazines anywhere in that garage? But agonizing truth be told, there was a time when I wasn’t much better.

Flashback to my fourteenth year of life. I’d just left the XR200 behind and had picked up a used 1993 YZ125. My older brother, who had a habit of regularly blowing up his CR250, recommended I rebuild the top end as a precautionary measure. I already knew everything there was to know, so of course I didn’t need anyone’s help and proceeded to rip apart the engine of my newest, and most prized, possession. I called it quits for the night after getting the cylinder off, and returned the next day only to find the crank would no longer rotate freely. It would get about half a revolution in before, clunk, stopping dead in the same spot each time.

This had to be sabotage, and I picked up the phone and called my buddy, who had stopped by the evening before to check out my new bike. He’d obviously dropped debris in the crankcase when I wasn’t looking to get back at me for what I’d done to his dad’s KX500, and I let him know how I felt with a torrent of threatening accusations, which were met with hysterical laughter.

Ultimately, the brilliant solution to the problem was to fill the crankcase up with gasoline, rotate the crank back and forth as much as possible, and turn the bike upside down to rest on its bars and subframe while raw gasoline poured out and ran innocently down the driveway and into the street. I completed this highly technical procedure about eight times, and magically, it ended up working. The only thing that bothered me was that I wasn’t able to find that telltale piece of debris, especially since my buddy dodged me for about a month after that.

Yet another bike that’s begging to be smashed like a drunk guy at a Christmas party. I mean, a Chinese engine in what used to be a badass mini-ripper? C’mon! But the insults and sarcastic remarks just aren’t going to happen this time. For one, dude’s sporting a Racer X sticker on the rear fender, and that makes him untouchable. Second, the seller obviously doesn’t care what anyone thinks, and that makes him a true moto rebel in my book. Sure, I may be a little older now and don’t dream of messing with golfers with my dirt bike as often as I used to, but that doesn’t mean I don’t chuckle when I imagine some of the shenanigans this guy has likely pulled on this thing. Reminds me of some of the Crusty Demons of Dirt moves I used to pull back in my day.

First one that comes to mind took place when I was about to graduate from high school. Each student had to put together a minute-long video showcasing us, so I of course busted out my dirt bike. I got footage of me blowing up first-gear berms and tossing out huge tricks like one-handed finger points, but I felt that wasn’t enough. I needed to cap it off with a bang. What better than to ride a dirt bike through an In-n-Out burger (that’s a glorious southwest burger chain for all you East Coasters)? I’m not talking the drive-thru either; I’m talking through the actual dining area. I enlisted the help of all of my moronic pals, borrowed a box van from work (to “help a friend move,” of course), and came up with a plan to lay rubber in the In-n-Out in Napa, California.

I had friends stationed at each set of doors to make sure I could get in and out quickly, and I also had two guys with cameras sitting at different ends of the floor for alternate angles. With everything in place, I stripped down to nothing but boots, super-short cutoff jeans, and a helmet (I don’t know why I thought that would be funny), and put Operation Dumbass in motion. Except for nearly clotheslining myself on the top of the doorframe on my way out, everything actually went perfectly and I ripped through the parking lot, shot up the waiting ramp and into the running box van, and vanished from the scene of the crime like Jason Weigandt when the dinner bill arrives.

Looking back, I’m amazed that someone who was dumb enough to go through with something like that was actually able to consider all the logistics and moving parts necessary to make it successful. I never even got in trouble, despite showing the video to hundreds of people at my class night. But just in case, I made sure to dodge In-n-Out for a good month after that.