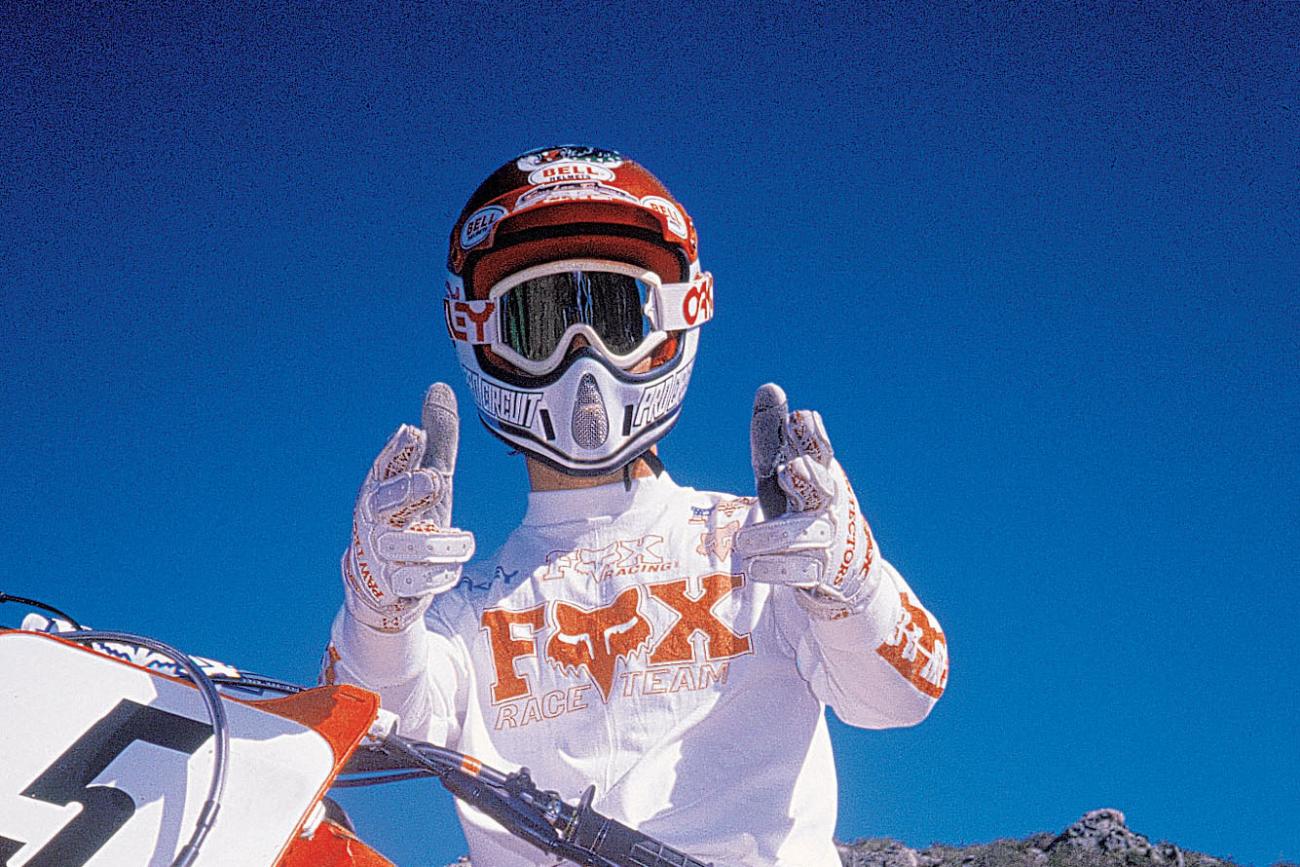 Last night I was watching game three of the NBA Finals, and all they could talk about was how big of a hero LeBron James is. Personally, I’m not a LeBron fan. (However, if LeBron manages to pull this title off over the Warriors, one of the best scoring teams of all time, without his wingmen Kevin Love and Kyrie Irvin, this might be one of the best sports stories of all time.) I’m a Michael Jordan fan for life.

More on that later.

With that in mind, let’s talk about a different kind of hero. If you’re reading this, you no doubt had or have a moto hero. Someone you’ve admired and no doubt had on your walls.

As a kid, I had my walls covered with pictures ripped out of the pages of Motocross Action or anything my local dealer, Ramer Motors, might have thrown me after they took down one of Yamaha or Honda championship posters. I didn’t have just one rider. There was Johnny O’Mara, Jeff Ward, Broc Glover, Ron Lechien, and the legend Rick Johnson. He is truly my all-time favorite rider.

When RJ wore those “Life’s a Beach” shorts over his gear, I begged my mom to get me the same set. When he wore a red bandana around his neck, I wore one too. I wore his famous dog on my helmet throughout arenacross. He was the ultimate bad boy. A beast. And he won races and championships.

He wasn’t simply flair. We met during my championship run in 1990 and he was as cool as I imagined. I still get giddy as a schoolgirl when we text. Don’t judge.

That’s one thing you can almost guarantee in motocross—whoever your moto hero is, he’s no doubt as cool as you imagined. Some may be a little more pretentious today than riders of the past, but they’ll still sign your baby’s forehead and shake your hand with a smile. The promoters have made moto and supercross riders so obtainable, more so than in any other sport. Every Saturday riders are out there shaking hands and kissing babies. Throw in all the dealer appearances each weekend and you’ll have every opportunity in the world to meet your favorite rider.

I’ve met some of my moto heroes in the most random of places. I walked up to the trailer at Loretta Lynn’s one year and saw Marty Tripes, and the craziest part was that he actually knew who I was. We talked for like twenty minutes about old moto. Late one night in Vegas—okay, it was morning—at the MGM, Danny Chandler came up by and gave me crap for being up so late. C’mon, Magoo knows who I am? I sat down with him, and we talked moto for forty-five minutes. Then, every year after that I’d make sure and find him at Hangtown to say hi.

One of the first years Broc Glover started with Dunlop and was coming to the early arenacross rounds, he stopped by our pits, and Buddy Antunez and I cornered him for thirty minutes peppering him with questions. I remembering asking him what happened in that picture of him on a YZ490 coming down a dry, dusty hill with the front brake cable up over the top of his Arai face mask. Anyone remember that one?

Bottom line is that moto is such a bad-ass sport, and no matter your success in the sport, whether you’re a 6-year-old peewee kid, 40-plus rider, or former pro, you’ll always have a moto hero.

Now back to Michael Jordan. I started watching basketball because of him. I rooted for those Bulls, yelling and screaming for them to get their first title. And I just loved watching him crush the league for the next decade. He was so intense. He was an über god outside of moto and still to this day my only non-moto hero. So, one year at the Fontana road race, my former wife was doing umbrella girl work for Jordan’s Jumpman team—you know road racers and their umbrella girls. God forbid they sit in the sun. I’m kidding!

Once the racers took off from the grid, the head of the team suggested we roll up to the team suite and watch the races. So Michelle, Budman, Riley, and I headed up. We knocked on the door, and, no joke, MJ himself opened the door. My mouth dropped. He welcomed us in and he stopped me with his hand on my chest and said, "Smith, huh?"

I was working with Smith Optics at the time and he was a known Oakley guy. Years later I would read stories about him making other people take off their Adidas to wear a pair of Nikes for him.

I was like, “Yeah, that’s who I work for.” He laughed, shook his head, and invited me in. For the next hour of the race, Bud and I drank beers, talked crap, and bet on the race with the greatest NBA player of all time and my all-time hero. He let us take a picture with my son Riley on his lap, which I show him every year. His favorite player is LeBron, but I make sure to let him know he met the best. It’s still one of the coolest and most memorable days ever.

A hero can be anyone. Your mom, your dad, your own child, your friends, neighbors—the list goes on and on. Anyone can inspire. Don’t be afraid to go out and be a hero yourself.

That’s it for this week’s Revolver. Thanks for reading.