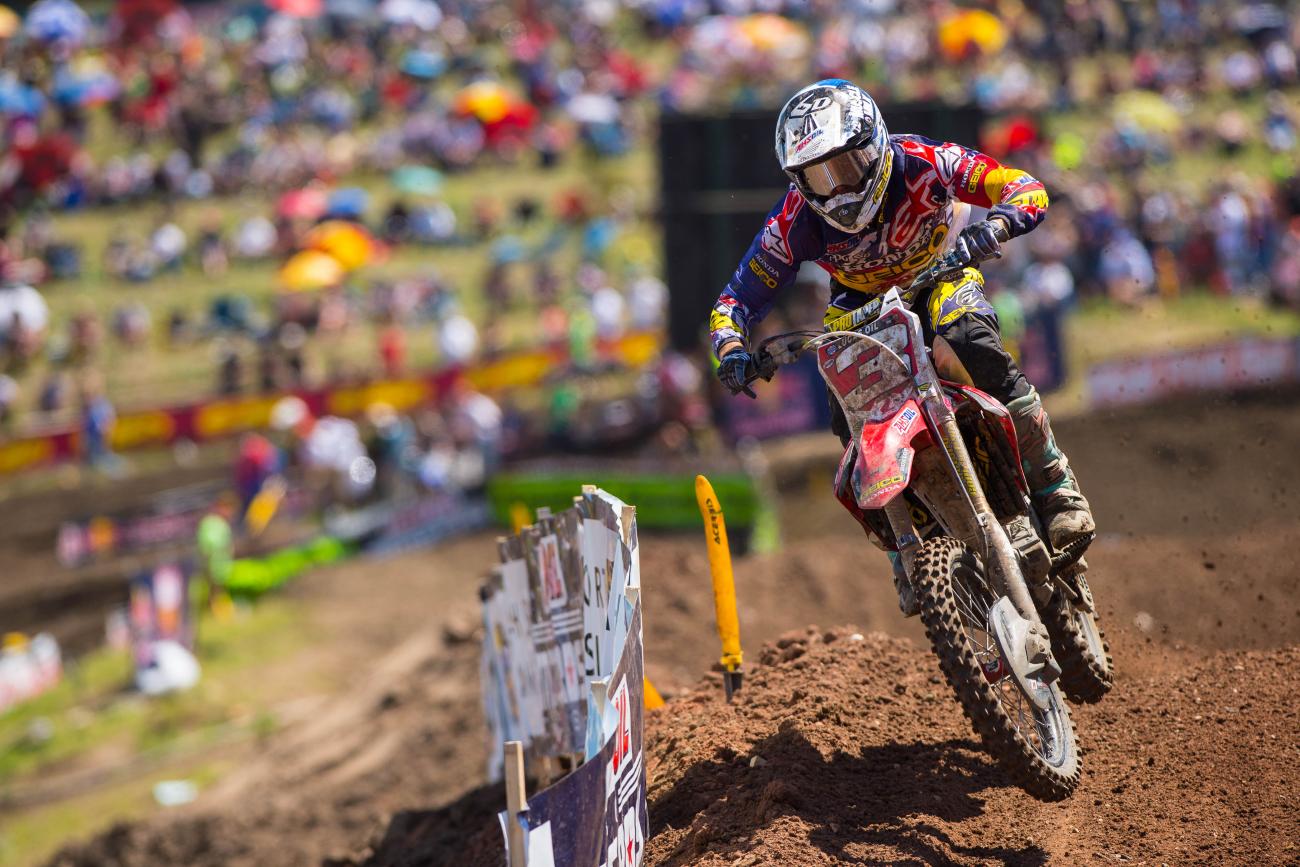 There’s been a lot of talk about Eli Tomac’s big crash on Saturday in Colorado. I’ve heard several opinions concerning every aspect of it, from one end of the spectrum to the other. It’s easy to be an expert afterward and say that Eli should have done this or that differently. For this week’s Breakdown I wanted to offer my own thoughts.

Eli had dominated this series until Thunder Valley. There’s no realistic opinion that could argue against that point. His second-moto win at Hangtown was possibly the most impressive ride I’ve ever seen, barring Ricky Carmichael’s mud moto win at Millville in 2006 (which I happened to be in). Regardless of the margin of victory, the wins hadn’t been in doubt past the halfway point of any moto. He’d been racking up twenty-plus-second leads every time the gate dropped.

The question is: At what level is he riding to attain such large leads? Has he been able to do this with more in the reserves? Is he riding on the edge of control? From a spectating point of view, it doesn’t seem so. I haven’t seen many close calls, or at least not any more than anyone else is experiencing. He seemed able to sustain that mind-blowing pace without much trouble…until he couldn’t. His big crash at Lakewood opened the floodgates on that discussion. Was he riding too hard considering how big of a lead he had? Should he have backed it down and managed the gap? Those are easier questions to ask than to answer. The track at Lakewood has a history of taking down championship contenders. James Stewart’s 2012 fall in the exact same spot as Tomac’s crash is a reminder of how just how treacherous the Colorado course is (although that one will forever be shrouded by a photographer crossing the track). I can remember being passed in these spots on that track. Accelerating down a steep hill while locked into a fifty-yard-long, bump-filled rut is not my idea of a stress reliever. This is the situation that Eli and seventy-nine other riders faced on Saturday afternoon. When the track is at its toughest, how much is too much?

I’m of the opinion that only Eli really knows. Only the rider can gauge how hard he’s pushing. He may have been very comfortable with the pace and simply made a mistake. Or, he may have been over-riding the conditions and trying to destroy everyone like he did at Hangtown. That’s something only Tomac knows.

I’ve been in this position before, albeit not a national moto, but nonetheless winning a professional-level race. It’s always this same dilemma. On one hand, everything is flowing and adrenalin is pumping. The lead is growing, and it feels as if one can do no wrong. With the adrenalin and the growing lead, there’s confidence to go even faster and crush the very souls of the riders in tow. The wiser choice is to keep that adrenalin in check and do only what is necessary to win. Marking the rider behind and maintaining a comfortable lead is what riders like Jeremy McGrath, Ricky Carmichael, and even Chad Reed had down to a science. They would jump out to a solid lead and then manage that lead to the finish. It’s been the recipe for winning championships in all forms of racing for decades.

Racing many times comes down to a risk-versus-reward choice. For a championship as prestigious and important as the Lucas Oil Pro Motocross Championship, every decision is crucial. Victory by one second or by one minute is completely irrelevant when the points are tallied. Sure, winning by huge margins is impressive and jaw-dropping, but if the cost is an elevated risk, that won’t pay off long term. As incredible as Tomac’s ninety-one-second lead at Hangtown was, he still only gained 3 points in doing so. This isn’t the Tour de France; time margins don’t matter. A win is a win and only a win.

This brings us back to the real question again. Was Tomac pushing too hard? On a track that was, to the riders, one of the most treacherous they had ever ridden, maybe he was. Only he can answer that question. In reality, he may have felt completely comfortable with the pace and just didn’t expect that response from the bike in that moment. I’ve seen riders crash while under no pressure and looking completely relaxed. My opinion is that he was probably taking a few unnecessary chances, but he felt comfortable with the pace. Normally, he would have probably been able to do hundreds of laps without any issue. On this particular day, however, we saw that the track seemingly had a mind of its own. Marvin Musquin had a very uncharacteristic crash, as did many others. The track demanded more respect than most tracks on the circuit would.

As William Shakespeare once opined, “The better part of valor is discretion.” In this context, he’s referring to discretion as a form of caution. In modern day conversation, he would say something like, “The most important aspect of being courageous is the element of caution that comes with it.” When you think about it, Ryan Dungey’s entire approach to championships mirror this Shakespearean theme. I just blew my own mind with that little realization, but it’s so true. Ryan Dungey is the calm, clear skies, and Eli Tomac is the raging hurricane. It will be interesting to see who is still standing when the storm subsides.