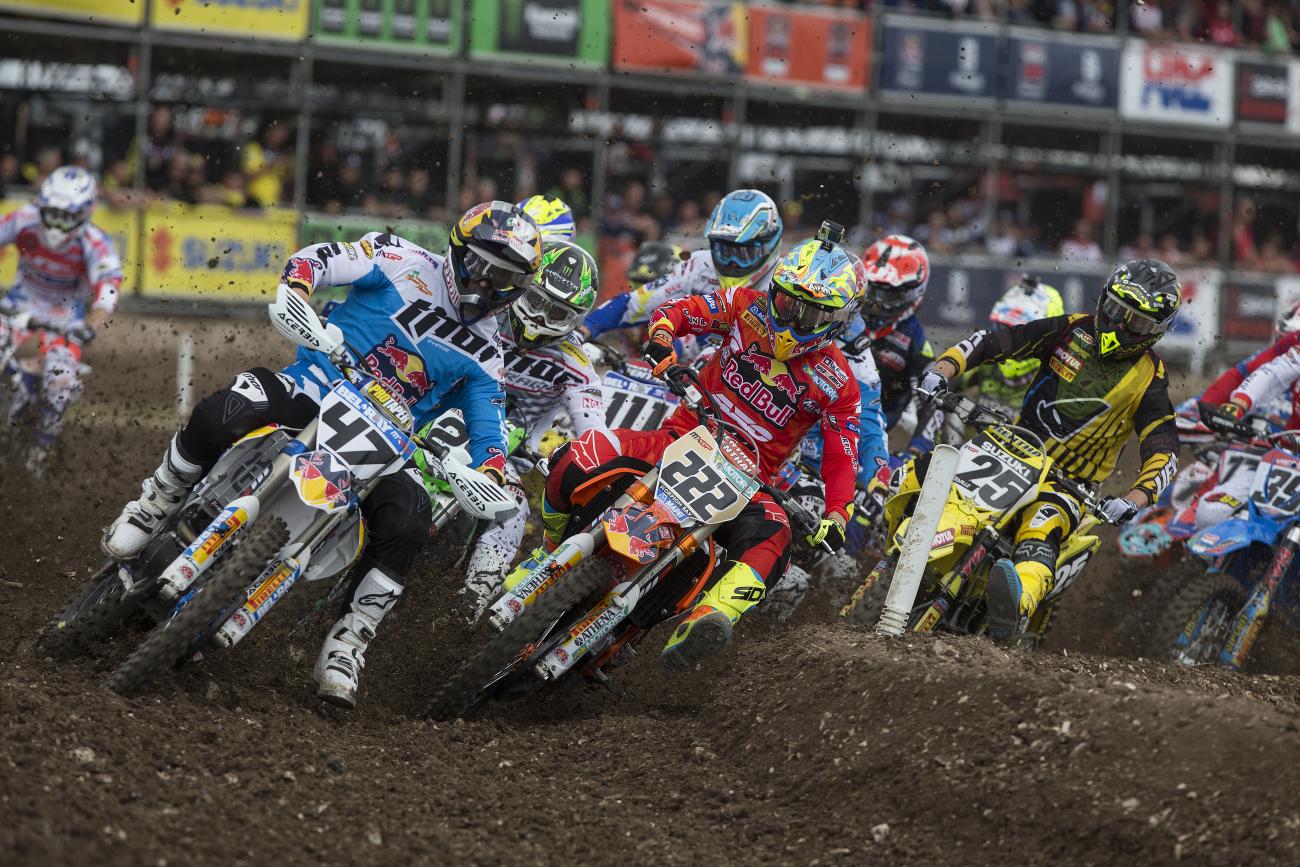 No Ryan Villopoto. No 2012 MX2 GP winner Tommy Searle. A risky May date with the notoriously unreliable English weather. There were some question marks over the 2015 MXGP of Great Britain before the trucks even rolled into the paddock last week. In truth it will take something special in the remaining ten rounds of the FIM Motocross World Championship this year to beat the premium racing experience at Matterley Basin.

A challenging but scenic track, a bumper crowd with pre-event ticket sales already double that of 2014, strong British showing from Max Anstie in MX2 and Shaun Simpson in MXGP, and an absolutely cracking pair of MX2 races all helped make a feel-good atmosphere. And the sun shone for the most part. The organization at Matterley—helmed by the passion and relentlessness of Monster Energy DRT Kawasaki boss Steve Dixon since he co-created the site back in 2006 for an inaugural GP and Motocross of Nations—seemed to be at last chiming along nicely in what was just the fifth year for Matterley on MXGP duty. Talk of a return for the Nations in 2008 at the site that offers unparalleled viewing for spectators was not unwarranted or undeserved.

In MXGP Tony Cairoli took his second overall victory in a row on the Red Bull KTM 450SX-F with a 1-3, surviving a small mishap in the second moto that briefly tweaked his left shoulder. TV commentator Paul Malin provided the info that the Sicilian’s sixth win on UK terrain saw him eclipse a record previously held by Belgian great Joel Robert. It drew the #222 to within 24 points of Red Bull IceOne Husqvarna’s Max Nagl (fifth overall in the UK) and Rockstar Suzuki’s Clement Desalle who will look upon the 2015 British GP as “another one that got away” this season. The Belgian has six podium finishes in seven rounds and was runner-up at Matterley with a 2-2, but he hasn’t won a Grand Prix since the visit to Germany last summer.

Social media channels saw some athletes posting pictures of their roost-battered torsos on Monday morning (and the English terrain did seem more stony and chalky compared to normal), and the MXGP riders had to work a bit harder and swallow more for their points on Sunday. When Davide Guarneri lost control of his works TM on the step-down before the long quad and was apparently briefly knocked out at almost the midpoint of the first moto, the race was red-flagged and a full re-run declared. For riders like Yamaha Factory Racing Yamalube’s Jeremy Van Horebeek returning for the first time since round four after a broken foot, it wasn’t the extra riding time he was expecting. It was also unfortunate for Desalle, who had a comfortable lead at that point but would then have to watch Cairoli escape at the restart as he tried to overtake the stubborn presence of MXGP leading privateer Shaun Simpson for second place (the British champion got sixth overall with a 5-6 after taking the holeshot and leading the first four laps of the second moto, much to the delight of the crowd). The restart was also a relief for the championship leader. Max Nagl had made a mistake on the first lap, was buried in the pack, and suffered for his malaise away from the line. He was fighting back from last place when the moto was halted for Guarneri to get some attention; the Italian was later given the all-clear. Nagl didn’t repeat his error and rode to third position behind Desalle after his reprieve.

Gautier Paulin’s mystifying form on the works CRF450R continued for Team HRC, but the Frenchman lost to a very solid Evgeny Bobryshev, with the Russian getting closer and closer to a first podium finish since 2013. Nagl’s teammate, Todd Waters, made some bright starts on the other Husqvarna. Thoughts were with another of the brand’s athletes, Rui Goncalves, as he broke numerous ribs and damaged his spleen in a crash

The manner of Romain Febvre’s second-moto victory on the YZ450FM—the maiden checkered flag of his career in the premier class just two weeks after he walked the podium for the first time in MXGP—was impressive, as the Frenchman launched into the British bumps that were by then glistening due to fine typical English rain. Desalle was powerless to Febvre’s charge, and the #461 obviously had the speed and confidence at Matterley. He earlier set his fastest lap towards the end of the first moto for seventh place after he’d found a way past Waters.

For once MXGP was not the main attraction. Standing Construct Yamaha’s Valentin Guillod, Red Bull KTM’s Jeffrey Herlings, and Monster Energy DRT Kawasaki’s Max Anstie were responsible for some gripping entertainment in both motos in MX2. Anstie gave the British public exactly what they wanted, as he led most of the first race. But Guillod was in close pursuit, hungry and keen after his first Grand Prix win in Spain two weeks previously.

Herlings, competing with a sore back after his get-off in Spain, rode incredibly to close a six-second gap to the front-running pair and pass both of them on the penultimate lap. Guillod secured second place in a true grandstand finish. Anstie couldn't get the same start in the second moto, so the Swiss and the Dutchman engaged in a duel for the win and the overall. Herlings applied pressure, frequently showed his front wheel, and briefly took the lead only for Guillod to retaliate. It went to the wire and the Yamaha man prevailed on his YZ250F by less than a second, the first person to beat Herlings back-to-back since Tommy Searle in 2012. World Champion Jordi Tixer made the podium thanks to his consistency, and for the fourth time in a row the Frenchman was part of the champagne ceremony. Sixth place for Anstie sadly wasn’t good enough, so a first podium in DRT Kawasaki colors still waits. HRC’s Tim Gajser had earlier ruled himself out of the Grand Prix after a warm-up crash caused a concussion.

Ryan Villopoto was again missed for yet another group of fans hoping to see the four-time Monster Energy Supercross Champion up to speed, but there was some increased American presence at Matterley outside Monster Energy Kawasaki’s Thomas Covington. Darian Sanayei is another prospect from the Monster Energy Kawasaki belt, and the youngster’s willingness to travel to Europe—like Covington in 2013—and try the EMX250 series from out of Dixon’s Kawasaki awning paid-off with a first-moto victory. He scored fourth overall after a falling in the second moto and finishing twelfth.

“I was a bit nervous, but it was cool to do different competition and race against people that I hadn’t been with before,” he said. “Over here they’re definitely aggressive and stuff, and the way you set up a pass is quite a bit different, so I enjoyed that and bringing some intensity into it was cool.”

Sanayei’s Euro adventure might not be over. He was riding Mel Pocock’s KX250F. The Brit was back in attendance for the first time since his savage hand injury at the first round of the British Championship in March that cost half of his right thumb and numerous operations and skin grafts. The former European Champion still doesn’t have a date for a possible return to action but was a popular figure at Matterley.

In contrast to Sanayei’s experience, Mike Alessi and MotoConcepts’ unusual but admirable approach to multi-series participation didn’t bear any fruit in their first MXGP attempt. Falls and poor starts seemed to be just part of the story, and #800 barely registered in the top ten, eventually finishing nineteenth overall and scoring just 4 points.

Matterley’s scale meant that it would always be a hotspot for extra support classes, and three European categories joined the Women’s World Championship gathering to keep the program going from morning until late afternoon both days. In EMX125 Britain’s Conrad Mewse seemed to have a well-received first win in hand on his Red Bull KTM until he was penalized for jumping on a waved yellow flag, and Yamaha’s Maxime Renaux (winner of the first moto) willingly received the top spot instead. EMX250 did see a British winner, as Wilvo Forkrent KTM’s Adam Sterry survived the glare and expectation of the public to go 2-3. Finland’s Emil Weckman was the best Honda CRF150F rider, and former WMX Champion Livia Lancelot was the fastest female in Great Britain, as defending champion Kiara Fontanesi crashed at speed in the first moto.

The FIM Motocross World Championship continues with the first major meeting for the Villars sout Ecot circuit close to the Swiss border since the facility hosted the 1988 Motocross of Nations.