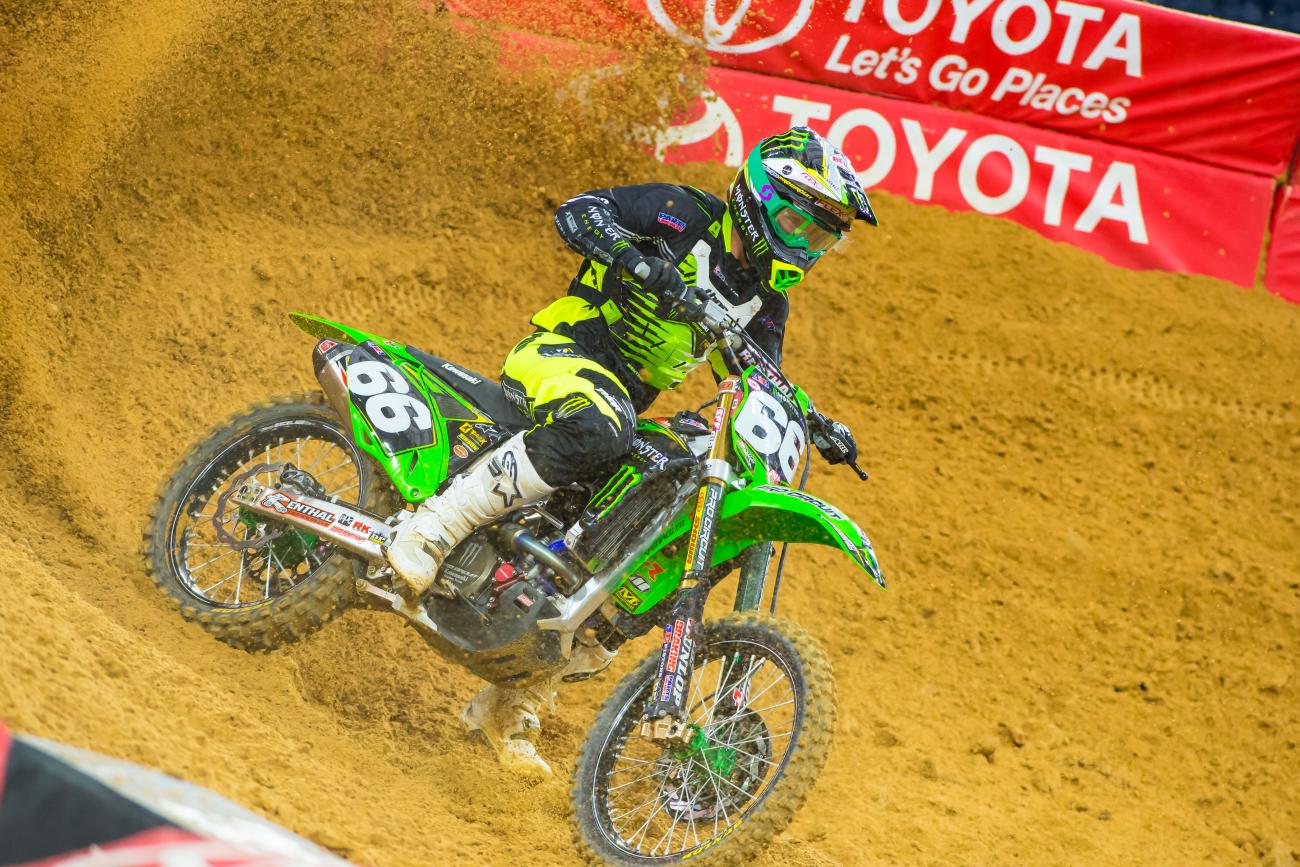 According to a team press release, Eli Tomac battled flu-like symptoms the week prior to Houston. On his post-race interview on the Fox Sports TV broadcast, Tomac said he had some energy problems. In a team PR, he said he felt “OK” during the day, but ran out of power that night. Tomac overcame a bad start to finish third—his third straight podium. “We're still a solid second in the points with three races left, so even though the overall championship was decided tonight, there are still things to fight for down the stretch,” he said in a team statement. “More wins and more podiums would be good."

Josh Grant’s remarkable turn-around continued in Houston. Grant battled for a podium spot before eventually finishing fourth—his best finish this season. Since Arlington, Grant has averaged a 7.25 finish. In the prior six rounds, Grant had averaged an 18.6 finish. We’ll have more on Grant later in the week.

There was a crazy battle through the early laps of the 450SX main. We’ll try to describe it rider-by-rider here. First, Grant’s team owner, and teammate, Chad Reed, had to battle back to fifth—one spot behind Grant. Reed was poised for a podium, his third this season, before Jason Anderson tried to force a pass on Reed in the corner after the finish line, sending both to the ground. Just one of many involved with Anderson.

If it were 2 years ago, I would have put a special someone to sleep after tonights race........

After his run ins with Reed and Peick, Anderson crashed again later in the main and finished sixteenth. “I was trying to pass into second and then I went down with [Chad] Reed, then got back up and had a big crash in the sand,” he said. “I rode good and I have a lot to take away from it. I just need to go to Santa Clara and get back on the podium."

Broc Tickle was also in that battle, stayed strong, and passed teammate Ken Roczen for eighth in points following his ninth straight top-ten. Tickle said they made some changes throughout the day, which “worked well,” but that he still has work to do going forward. “I made a couple passes in the beginning but I got a little flustered when [Davi] Millsaps and I came together and I kind of lost my groove,” said Tickle. “It’s frustrating because I had good speed all day. So, for us, we just need to go back home and have a good week, go to Santa Clara, and see if we can improve.”

Okay then, now onto Millsaps, who not only had a battle with Tickle, but also with Yoshimura Suzuki’s Blake Baggett. Maybe you remember Millsaps’ crash in Arlington, when Trey Canard hit his back wheel while he was going over a wall jump? Millsaps looped out. Well, this time Millsaps was the one who tagged the rider in front of him—Baggett—and Baggett was the one that went down. The Suzuki guys showed us video of the crash and it was quite similar to what happened to Millsaps in Arlington. “I was steadily working my way towards the front and maybe got into eighth or ninth when I got hit from behind going over the wall and went down,” said Baggett. “I’ll go back and regroup. I know what I need to work on and I’ll just keep plugging away. We’ve got a few [races] left and we’ll see what we can do.”

Said Millsaps: “The main event was intense tonight. The track was technical and rutted and there were a few spots where we would all stack up every lap, which kept the racing close. I got held up a few times in the early laps where I had a chance to get ahead of the chaos, but instead I was right in the thick of it.”

AutoTrader.com/Toyota/JGR Yamaha’s Justin Barcia made his return to racing after missing about two months with a cracked pelvis. He showed some speed, and better starts than he was getting earlier in the season. Barcia told us all the intense battling at the beginning of the 450SX main gave him “gnarly arm pump.” No doubt he’ll get better as he gets his racing legs back under him.

We saw some crazy battling in the 450SX main, and you can see that reflected in the lap times. The second, third, and fourth fastest riders finished sixteenth, eleventh and twenty-second! All three of those riders—Jason Anderson, Blake Baggett, and Weston Peick—crashed. Meanwhile Dungey had only the eighth-fastest time, but finished second.

Texan Matt Bisceglia was fast all day at his home race—qualifying third and running inside the top three early in the main—but his night was undone after he lost his front wheel in the corner. The GEICO Honda rider came back to finish eighth. "I was really happy with my riding all day," Bisceglia said in a press release. "My pace was good and I felt as healthy as I have in a while. I just lost the front end after the triple [in the main event]. It happened so fast I couldn't even react. I just kind of slid out. I was able to get up and get right back into the race, but some guys got past me when I was down.”

Monster Energy/Pro Circuit Kawasaki rider Chris Alldredge’s rookie year has come with lots of bumps and bruises. The speed has been there, but the consistency has yet to follow. Alldredge admitted in a team press release that he needs to do more: “I get paid to be battling at the front. Although we made progress tonight, I am still not where I want to be, nor where the team and this amazing bike should be. I need to step it up even further next week in Santa Clara.”

Rockstar Energy Racing Husqvarna was down a rider after Zach Bell had a crash at Milestone testing the week prior and “messed up” his elbow and also sustained a collapsed lung. He wrote on Instagram that he underwent surgery last week, but is expected to return for outdoors. A Rockstar Energy team member also said they expect him back for outdoors. “I had a crash last week at milestone messed my elbow up and collapsed my lung and went into surgery right away! I've been training so hard and was looking forward to finishing the season strong. Looking forward to the start of out doors!” Bell said on Instagram.

Landen Powell sustained broken left ribs, a broken left collarbone, a broken hand, and a concussion after a scary crash in 250SX practice. Powell was removed on a stretcher and taken to the local hospital. He provided an update on Instagram: “Well…Houston did me dirty. Knocked myself out in the first timed practice and that was it for my night. 10 hours later I have been released from the Houston ER. Re broke all my left side ribs, concussion, broken hand, and a broken left collar bone. So devastated but also very thankful to be okay. 19 years of racing and that is only my 2nd ride ever in an ambulance. Not too bad considering the risk in our sport. So happy that my family was there to be with me. Love you guys! And thank you to everyone who has supported me through the ups and the downs of this crazy sport. We will be alright.”

Just when Zach Osborne seemed to be 100 percent healthy, he had a strange crash in his 250SX heat race. Malcolm Stewart crashed into the back of Osborne and his bike went flying into the adjacent lane. Flaggers didn’t have time to pull out the yellow flag and Osborne jumped right into downed bike—the whole thing literally happened in a few seconds. He qualified out of the LCQ and finished seventh. “In the heat race I pulled the holeshot and had a little unfortunate incident where I jumped on a bike that came from another lane, crashed, and got a gnarly stinger in my arm and neck, and maybe something in my collar bone,” he said in a team statement. “I don't really know. In the LCQ I got another really good start and qualified. In the main it just took me a while to get going. I was just mostly feeling out my arm and everything, and seeing what I had going on. Finally in the end I made some good passes up to seventh and it moved me to second in the championship. Hopefully I can wrap that up next weekend in Santa Clara." Considering all that Osborne has dealt with this year, second in points would be really impressive.