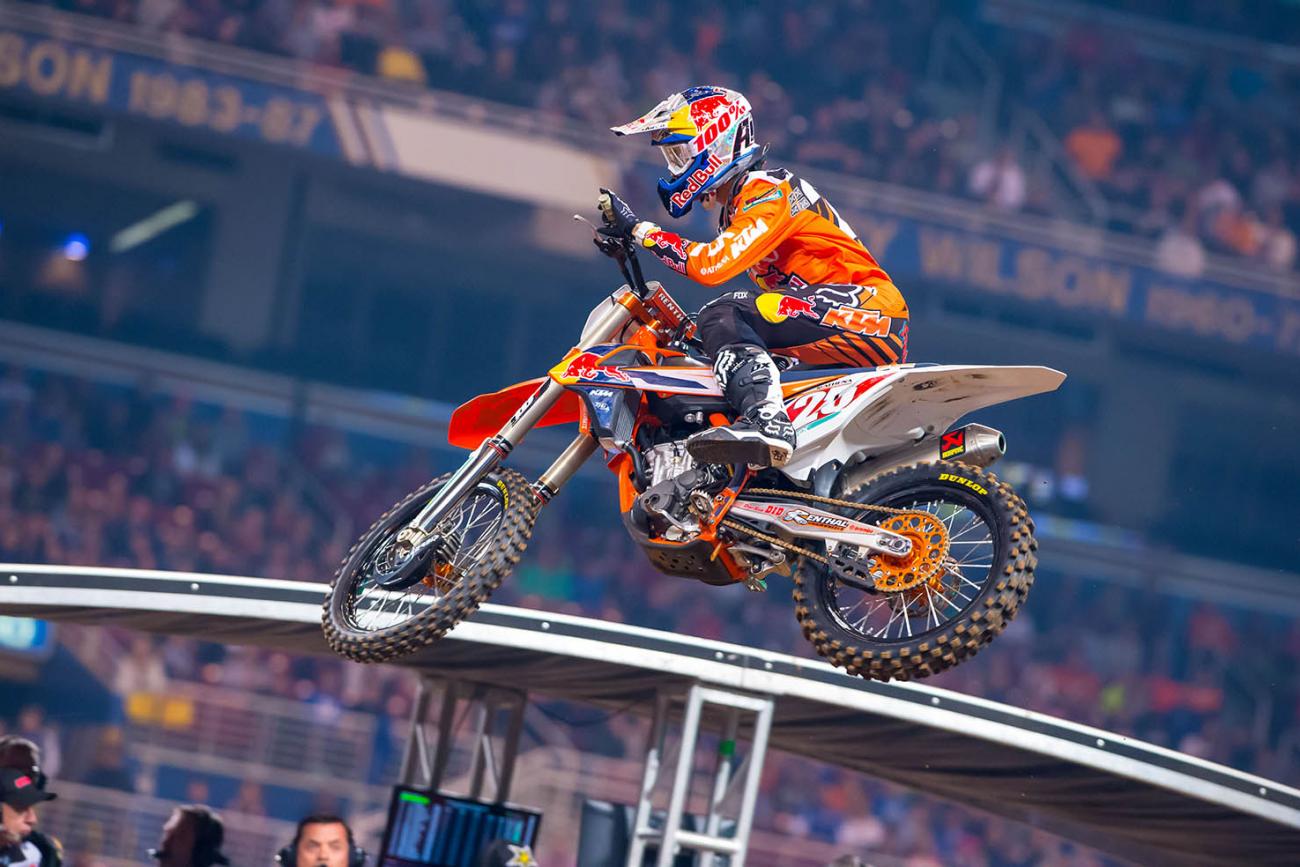 We’re going old school this week for Breakdown. When we first started this feature, we would have ex-pros and/or trainers “breakdown” riders in certain sections of the track. Over the month, and years, it became more and more difficult to do. Eventually Jason Thomas took over the column and made it his own—and it’s a great, great, feature. This week, we’ve decided to throw it back to the original and have JT break some stuff down. Ryan Dungey, Marvin Musquin, and Cooper Webb have been hot all season, and Cole Seely got his first premier-class win in Houston. To analyze what they’re doing right, we’ll use them as this week’s photo subjects. Enjoy!

1. In this photo from Houston, Ryan Dungey is making a pass on Josh Grant, which was actually set up in the whoops on the previous lane. Dungey was on the far right in the whoops, while Grant was on the far left. While the optimal choice was on the left, it severely sharpened the turn angle shown here. Being on the outside, Dungey is able to carry more speed and then slingshot underneath Grant. They actually launch from the finish line jump side by side, but because Dungey is carrying so much more momentum leaving the turn, he is able to scrub past JG and land ahead. The final execution of the pass does not happen until far after the finish line jump, but it was actually all setup back in the whoops on the lane before.

2. Here, Marvin Musquin is accelerating out of a flat right-hand turn. He’s hard on the throttle, but his lean angle is still very aggressive, indicating that the traction is very high. It’s of interest to note that he doesn’t keep one finger on the clutch as many riders do. James Stewart is another elite level rider that uses the same technique as Musquin.

3. Another of Marvin, except in this one he’s mid-turn. He hasn’t actually begun to accelerate yet, as his front wheel is still climbing instead of coming back down the berm. Notice that his middle finger is on the clutch, ready to build RPM and drive down the berm once he reaches the apex. If he were looking at this photo, he would probably say that he would like to be a bit on the lower side of the bike and leaning more ideally. His body weight being on the high side is pushing him higher into the berm and thus, delaying his exit.

4. Marvin is doing his best to scrub the finish line jump. Notice his left elbow is down after he turned the bars sharply on the jump face. Scrubbing is really a crazy technique when you actually consider that you’re turning the handlebars as hard as possible while departing the jump face. On paper that sounds like a great way to visit your local hospital, but for the best of the best, it’s pure speed.

5. In this one, Marvin is hopping off a flat tabletop in full attack position. His leg being slightly off the footpeg means that he’s lifting with his legs and knees to pull the bike upwards off the flat tabletop. Tabletop-to-tabletop jumps are all about lifting with the legs.

6. This is great form. He’s forward on the seat to provide front tire traction. He has his finger on the clutch for RPM precision. His head and torso are in line with the bike’s lean angle so everything is working together. Nothing to critique here—just solid on every front.

7. Cole Seely is exiting a rutty right-hand turn here. He’s doing everything as he would want. Note that he’s further back on the seat than usual for a turn. Many times the 450 accelerates so hard that, with some traction situations, a slide backwards on the seat is tough to avoid.

8. Nothing complicated here, just Cole pulling up hard to jump a rhythm section. When the front end is high, such as in this photo, it’s an indicator that the jump is tough to make. The front end is higher than normal because he’s pulling on the handlebars and changing the input of his weight on the bike’s chassis.

9. Cole is “soaking up” this jump with his body. This is more or less the same desired effect as scrubbing. The main difference is that his bike is more perpendicular than a typical scrub. The intention is to hit the jump much faster than needed and absorb that speed so you don’t jump too high or too far. When the suspension tries to unload, sending the bike higher, Cole pushes back down to counter act that force.

10. The newly crowned West Region Supercross Champion, Cooper Webb, is exploding out of this sand berm before the dragon’s back in Houston. His left leg ideally would be further forward, but the sand was creating so much wheel spin that he was staying more neutral in his body position. If he were further forward, the tire would be more prone to spinning. So, while his body is forward, he puts his inside leg much more toward the middle of the bike than he would in a standard supercross berm. This puts added weight on the rear tire in the sand.

11. This is the same turn, just a bit earlier in the turning process. His clutch is still partially engaged, controlling his acceleration. Also, note his eyes are looking where he plans to go, not directly in front of him.

12. Cooper Webb is in a prototypical supercross rut here. He’s doing everything right. Eyes forward, leg up leading the way, and head leaning into the inside of the turn to keep the bike’s center of gravity low.

13. Cooper is running like a scared dog. Yes, that has nothing to do with any technique; I just really wanted to use that after Tyler Bowers suggested Cooper do that earlier in the season!