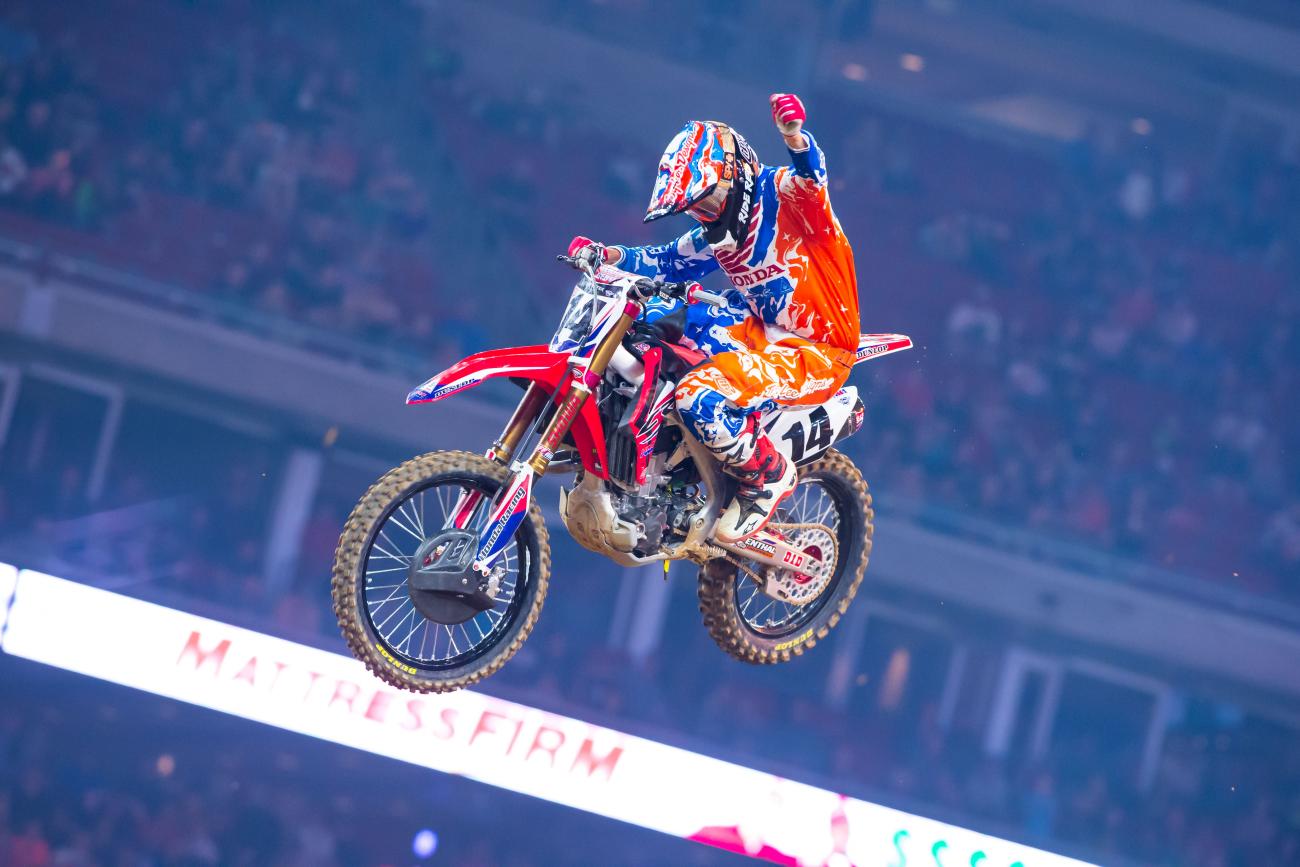 You think KTM winning a supercross championship seemed improbable just a few years ago? How about Cole Seely winning a 450SX main event? Little known as an amateur, then a privateer, then merely a fill-in rider for a support team [Troy Lee Designs Honda], Seely didn’t take the typical path to the front of the pack. He’s made the most of his chances and is peaking at the right time and succeeding at the highest levels. Now he has a 450SX win for Team Honda HRC, and it’s hard for anyone to figure out where his ceiling really is. It also seems hard for Cole to believe this is all happening!

Racer X: You won! Has to feel pretty incredible.
Cole Seely: It was amazing. Got off to a great start, was able to pass [Andrew] Shorty early on and knew I needed to get my good laps in right away and pull a gap. Just put down some really good lap times, and by the time it was halfway I had a twelve-second lead, so I just kind of backed it down and rode a smart race. It was unreal up there. I couldn’t believe what was going on. Just having so much fun on the bike. The team’s been working together so good. It’s unreal. I can’t believe it.

For a rookie, are you surprised you won?
Yeah, after A1 I’m really surprised I got a win. It’s crazy. The past five or six weekends have been so good and I feel like I’ve been right there. It was right at my fingertips and tonight I was able to finally pull a win off. I’m so stoked for myself and the team and everyone in my corner.

Have you seen the evolution from A1? It seems like you steadily progressed to then podiums and now finally a race win.
Yeah, it’s been a steady progression for sure. Once I found my groove that was all I needed. It was just a matter of really figuring out these 450 races, getting adjusted to the class and all the different riders and how much talent we’re racing against. It has been a steady progression.

Did you see it coming along? You’ve been close. This isn’t like it’s come out of nowhere. Have you felt like, “Okay, I know what it takes to win now”?
For sure. Just following [Ryan] Dungey the couple races that I did, and just learning from him. He’s such a solid rider, and watching his lines and when he attacks and when he holds back, I think I’ve learned the most racing against him. Just try to take that and keep doing it if we can.

As the laps were counting down a little bit, what’s going through your head there?
It didn’t feel real. Just looking back and seeing Dungey so far back and Eli [Tomac] behind him, it just didn’t feel real. It’s a hard feeling to explain, but I tried to relate it to when I would lead the 250 class last year and really just try and hit my marks, put down my laps. The bike handled so good tonight. I was so stoked with the way the suspension was handling, the tires, Dunlop… We were going through some tires in practice trying to find the right one and we definitely found the right combo. I’m ecstatic.

Did it help that you were up ten seconds?
Yeah, twelve at one point. It was crazy. Just to look back and be like, man, that’s second? This is a 450 race right now that I’m leading? It was unreal. Just the way the past six years have gone. Six years ago I rode for free and Troy [Lee] gave me an awesome opportunity and I thank him every day for that. It’s just crazy what progression can do and knowing the right people and just being on the right program. It’s been crazy. I never thought I’d be racing the 450 class let alone winning it.

And even back to when you first came into the pros, the Suzuki City days, did you see yourself even being in the sport this long?
No, I definitely didn’t. It’s humbling thinking back about that, but I try and look forward and really just strive for what’s next in my career.