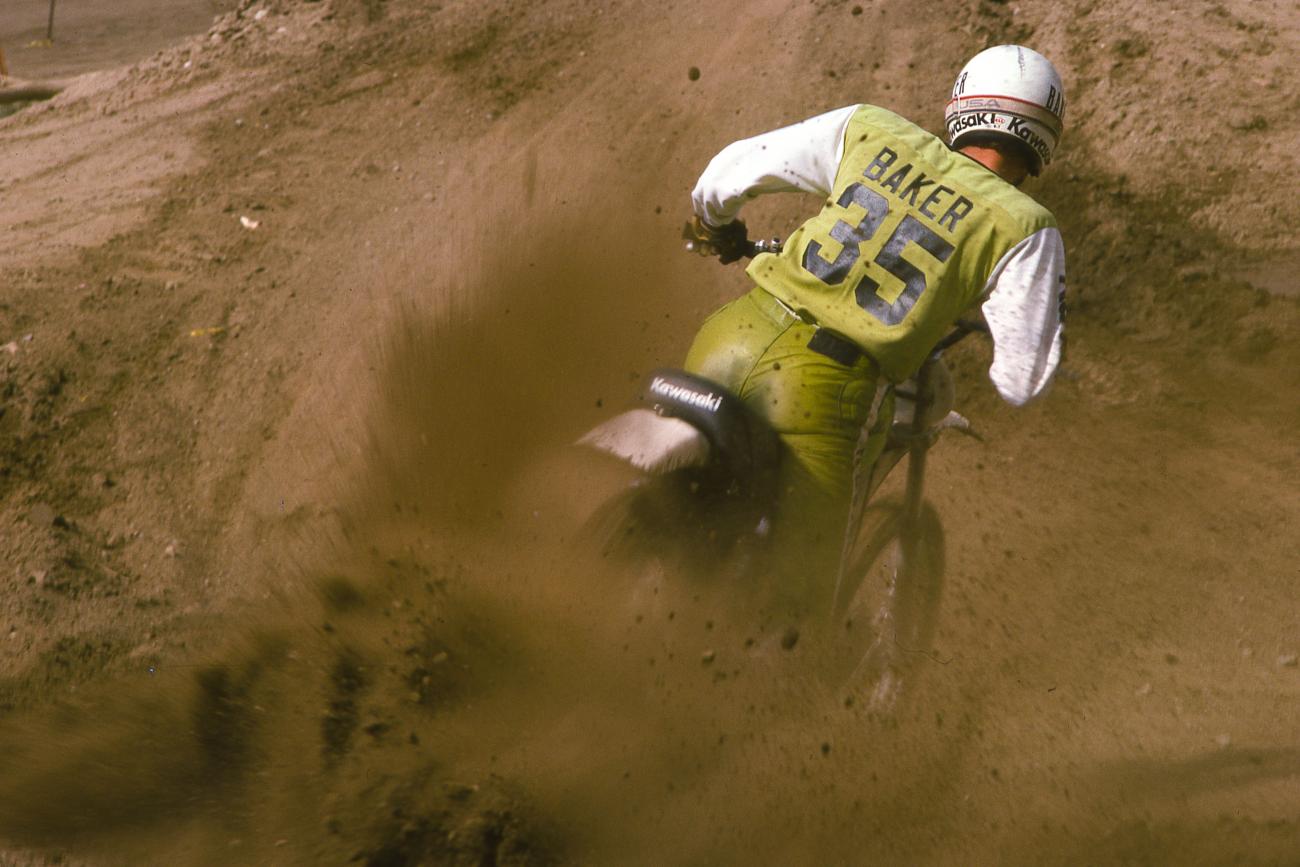 With no new bench-racing to do over the Easter break, we decided to go on a tour of the Racer X Online Vault, looking for some of the shorter entries in our hall of records (but they’re impressive records nonetheless). These are some of the riders and brands that were somewhat competitive, though not for long, in AMA Motocross and Supercross.

Al Baker pops up three times while riding a Kawasaki 250 in 1973. His best finish was his last finish: third at the Cycle-Rama Recreational Park National in Sligo, Kentucky. Baker was a desert rider from California, and he soon turned his attentions not only to winning the Baja 1000 (which he did in 1974 and ’75) but also starting his XR’s Only business in 1986. He was also the primary sponsor of a young Johnny O’Mara, helping the O’Show win the 1980 125cc US Grand Prix on a Mugen Honda. Unfortunately, Baker passed in 1992, two years after crashing his small, single-engine aircraft.

John Untiedt was a big kid from Virginia who rode Maicos in 1974. He has a total of three finishes listed, one of which was a second-place overall finish at the muddy 1974 Grand-Am 500 National at Hamersville, Ohio.

How many Hodaka fans are out there? Probably not many, though there is an excellent book by Ken Smith out about the history of this unique brand. Its history in professional motocross is pretty much limited to two finishes in The Vault, both in the 1975 AMA 125 Nationals by a man named John Dallaire from Atascadero, California.

Robert Haag is listed in The Vault just twice, and he finished third in the first-ever 125 national, which was Hangtown 1974, on a Husqvarna. Haag gained even more renown as one of the best engine porters at a fledgling SoCal hop-up shop that is still known as FMF.

Todd Campbell is a name with a place in supercross history: He was the winner of the first-ever 125 supercross main event, which took place thirty years ago at the 1985 season-opening San Diego SX. Riding for Team Green, Campbell won aboard his KX125, topping fellow Kawasaki riders Tyson Vohland and (Trampas) Chad Parker. Campbell only has eight entries in The Vault, and six of them are top-ten finishes. Not bad!

Gary Jones had a long and successful motorcycling career, winning the first three official AMA 250 National Championships (1972-74) as well as the de facto 1971 title after finishing as “top American” in the Inter-Am Series. After cycling through Yamaha, Honda, and Can-Am factory rides, Jones spent his later years on the pro tour trying to develop his own Jones-branded Ammex/Islo motorcycles, which were built in Mexico.

Jones was a Hall of Fame professional racer, but after having some knee surgeries, followed by some setbacks to his company’s bottom line due to some political and economic strife in Mexico, the best finish he could muster on his eponymous motorcycles was fourteenth at the Los Angeles Superbowl of Motocross.

Ted Presson II of Tennessee raced twice (or at least finished twice), including the first-ever AMA Motocross National at Road Atlanta in 1972, where he finished third. We googled the man, but we found little else about his motorcycle racing career. Anyone out there remember Ted Presson II?

Dick Burleson is known as King Richard in the off-road world, having won eighth straight AMA National Enduro Championships from 1974 to '81. But before that he was a motocrosser, and he won the de facto 1970 AMA 500cc National Championship for finishing as "top American" in the 1970 Trans-AMA Series. Those races aren't in The Vault (we're working on Trans-AMA and Inter-Am additions), but Burleson did do three 250 nationals in 1972 over a fifteen-day span. He finished in the top twenty all three times, then continued his transition into off-road racing.

Needless to say, his records there are much more impressive, but the simple fact that Dick was one of America's best motocrossers before his career change is very cool. He's still active in the industry today, working with Moose Racing and Parts Unlimited.

Jan-Eric Sallqvist was a Swedish rider imported to North America in the early seventies, just like his countryman Gunnar Lindstrom and Nils-Arne Nillson, as well as Holland’s Pierre Karsmakers. But unlike those guys, Sallqvist (whose name is spelled wrong in The Vault) landed in Canada, where he won seven Canadian National Championships. The Kawasaki rider also ventured into the States every now and then, completing six big AMA races. Impressively, he finished in the top ten every time!

If you work in the motorsports industry now you may know the name Barry Mayo from track promoting and running races, but he was also a very fast local pro. Check out his one and only entry in The Vault, a solid thirteenth-place finish in the 1974 RedBud 500 National.

Dick Mann is a motorcycle racing legend whose career predates professional motocross in America by a decade. He’s arguably the most diversely talented motorcycle racer of all time, and in 1971 he actually won rounds of the old AMA Grand National Championship in road-racing, half-mile and mile dirt track, TT racing, and short track. He was also a capable motocrosser, and in 1972 he scored a fourteenth-place finish in the 250 AMA Motocross National at the Cal-Expo—on a BSA! Dick Mann was 38 years old at the time of his one and only entry in The Vault.

Mann was also the reigning AMA Grand National Champion for road- and dirt-track racing when he qualified for that outdoor national in 1972.

Mexico-made Carabela motorcycles make just a few appearances in The Vault, all by Billy Grossi in the 1978 250 nationals, including a fifth-place finish at Hangtown. Not bad!

Back in the mid-eighties, Mark Melton was a promising young Honda rider from Indiana and a standout at Loretta Lynn’s AMA Amateur Nationals. He turned pro in 1986, but only entered six races. The cool part is that he finished in the top five in three of them, including a second-place at the 1986 Atlanta 125 Supercross.

Here are a few more very fast but very brief entries in The Vault belonging to fast young men who put in strong 125 supercross rides in the late eighties, but then more or less disappeared from the professional scene.

Finally, we will close with one very short professional career—as a racer anyway. The legendary photographer Jim Gianatsis pops up with one finish, and it came the 1972 Road Atlanta 250 National, which marked the first-ever AMA Motocross National. He made the top twenty. Few would remember Gianatsis’ brief “cup of coffee” as a pro rider, but his work throughout the years to come as a Cycle News and Motocross Action photographer, as well as a publisher of countless moto books and calendars, will likely never be forgotten.