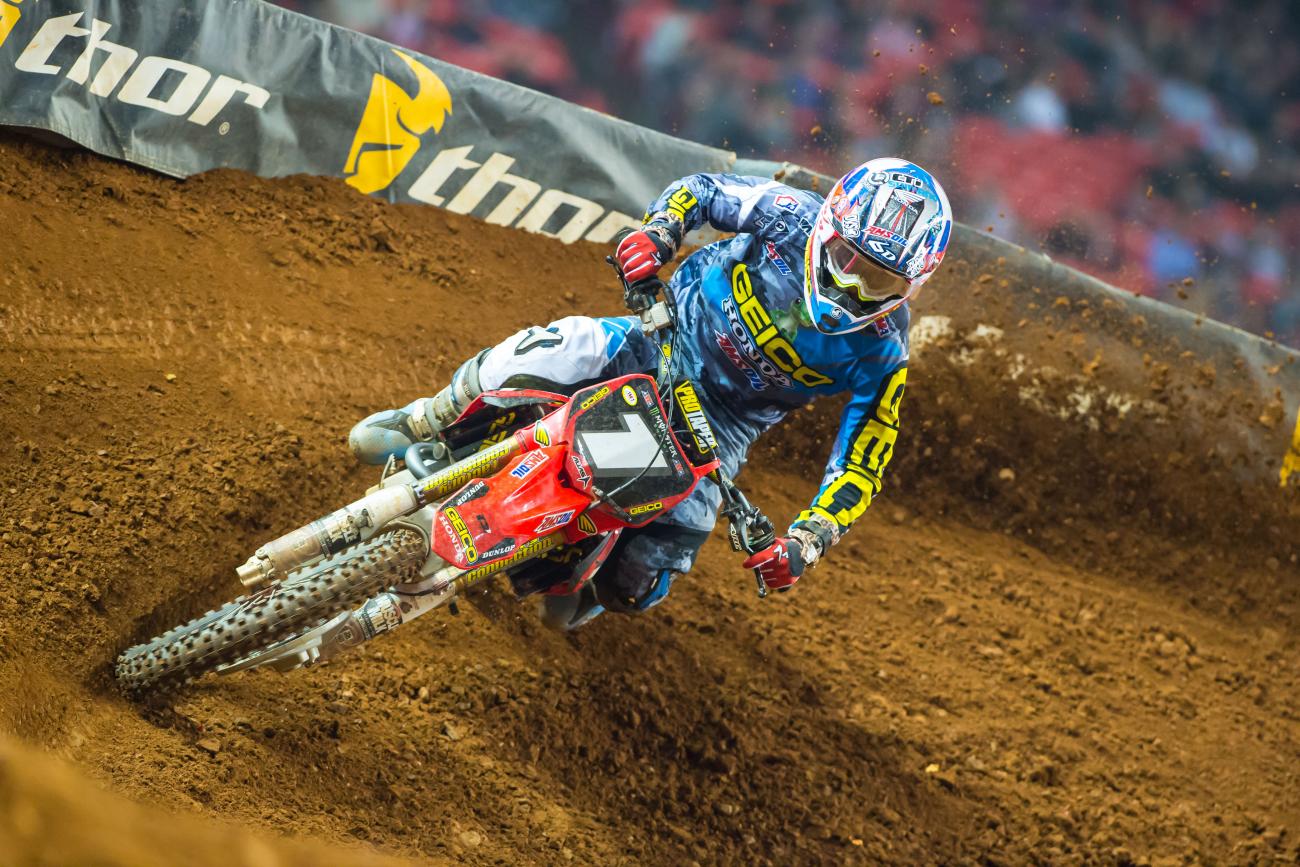 As another season of Monster Energy AMA Supercross, an FIM World Championship, winds down, thoughts have already turned toward next year and what the competition will be like. In addition to the reentry of plenty of riders who have withdrawn early this year with injury, there will also be a few 250SX riders making the jump to the premier class. But before we take a look at who that might be, let’s review the rules that pertain to pointing out. And remember, since Lucas Oil Pro Motocross is a national (versus regional) championship, there are no pointing out rules there.

The first rule refers strictly to points earned in a season, and only applies to the 2007 season and beyond. In other words, the 2006 season and prior seasons have no bearing on current 250SX eligibility.

Effective with the 2007 season points, riders earning at least 135 points in a nine-race season, 120 points in an eight-race season (there are eight 250SX races in 2015), or 105 points in a seven-race season, in three seasons of Lites competition will be ineligible for the Supercross Lites Class.

[Ed Note: In 2015, the East and West Region Championships only consist of eight rounds. Meaning, the 120-point limit is in effect.]

The above clause is what caught Monster Energy/Pro Circuit Kawasaki by surprise when Broc Tickle won the West Region 250SX title in 2011. The next clause affects riders who have self-promoted.

So now that the rules have been outlined, let’s see who’s getting the boot and who will be buckling them up again for more 250SX racing in 2016.

Josh Hansen chose to self-promote himself in 2012 despite having two years of eligibility left (he surpassed the limit in 2011). He ended up eighteenth overall in 450SX that year, which ended his 250SX eligibility, but since that rule was changed to apply only to the 2013 and 2014 seasons, he was able to return to the 250SX Class for 2015. Right now he’s got 79 points, so if he scores at least 41 points in the remaining two races he’ll burn a year, leaving him with at least one year to chase a 250SX title. Judging by his results so far this year, he’ll likely end up with at least two more years.

Gone, gone, and gone. And, did we mention, gone? After exceeding the limit in 2012 and 2013, Musquin missed 2014 with injury, but this year he’s back to his threshold-exceeding ways. He blew by the 120-point limit (he’s already scored 169 points) faster than New Jersey Governor Chris Christie declining a shot of wheat grass. Even if he doesn’t win the championship this year, which he should, he’s gone.

On an interesting side note, Musquin almost wasn’t eligible to race this year. Had he won the 250SX East Championship in 2013 (he narrowly lost to Wil Hahn) the AMA would have been forced to decide whether or not the one race that Musquin qualified for in 2007 (but didn’t even line up for) counted as an actual season.

A rookie in 2012, Justin Bogle won the championship last year. And since this is his third season (he missed 2013 with injury), he’s gone no matter what.

Savatgy’s first year was 2013, and he didn’t exceed the threshold. He also missed 2014 with injury, but right now he’s got 113 points, which means he only needs 7 more points to meet the minimum. With the way he’s been riding lately that shouldn’t be a problem, so he should burn a year of eligibility in 2015. Unless he wins the title next year, he’ll have at least two more years in the class.

You’d think the reigning 250 National Champion would have exceeded the limit in each of his three years in the class, but thanks to not qualifying for a few races in 2013 and 2014, and an injury in 2013, he didn’t exceed the limit until this year. Barring a championship in 2016, he’s got at least two more years of 250SX eligibility.

Barring disaster, Webb should wrap up the title this weekend in Houston, which means 2016 will be his third and final year of 250SX racing, no matter what.

After killing it at the Monster Energy Cup last year, Justin Hill told Racer X in this interview that he wanted to win the 250SX title this year so that he’d be forced out of the class. “I want to get kicked out of the peashooter class so I can get on a big bike,” he said. Unfortunately for Hill, that’s not going to happen this season, and unless he scores 41 points in the two remaining 250SX West races he won’t burn his second year of eligibility (he exceeded the threshold in 2014). He’s got at least one more year of eligibility left, perhaps even two.

Stewart exceeded the limit last year, but despite winning in Oakland this season, it’s mathematically impossible for him to do it again this year. Unless he wins the championship in 2016, he’s got at least two more years left.

Last year was the first year in Davalos’ career that he went over the limit (he missed it by a single point in 2013), but he won’t get there this year. He’s got at least two years left.

Osborne’s never gone over the limit, but he’s looking good for it this year. If he scores a total of 18 points in the final two races he’ll burn his first year of eligibility.

Like Osborne, Bowers has never gone over the limit, but he probably will this year. If he earns 16 more points this year he’ll go over, giving him at least two more years of eligibility.

Same story here as Osborne and Bowers. He’s never gone over, but likely will this year—he just needs 14 more points.