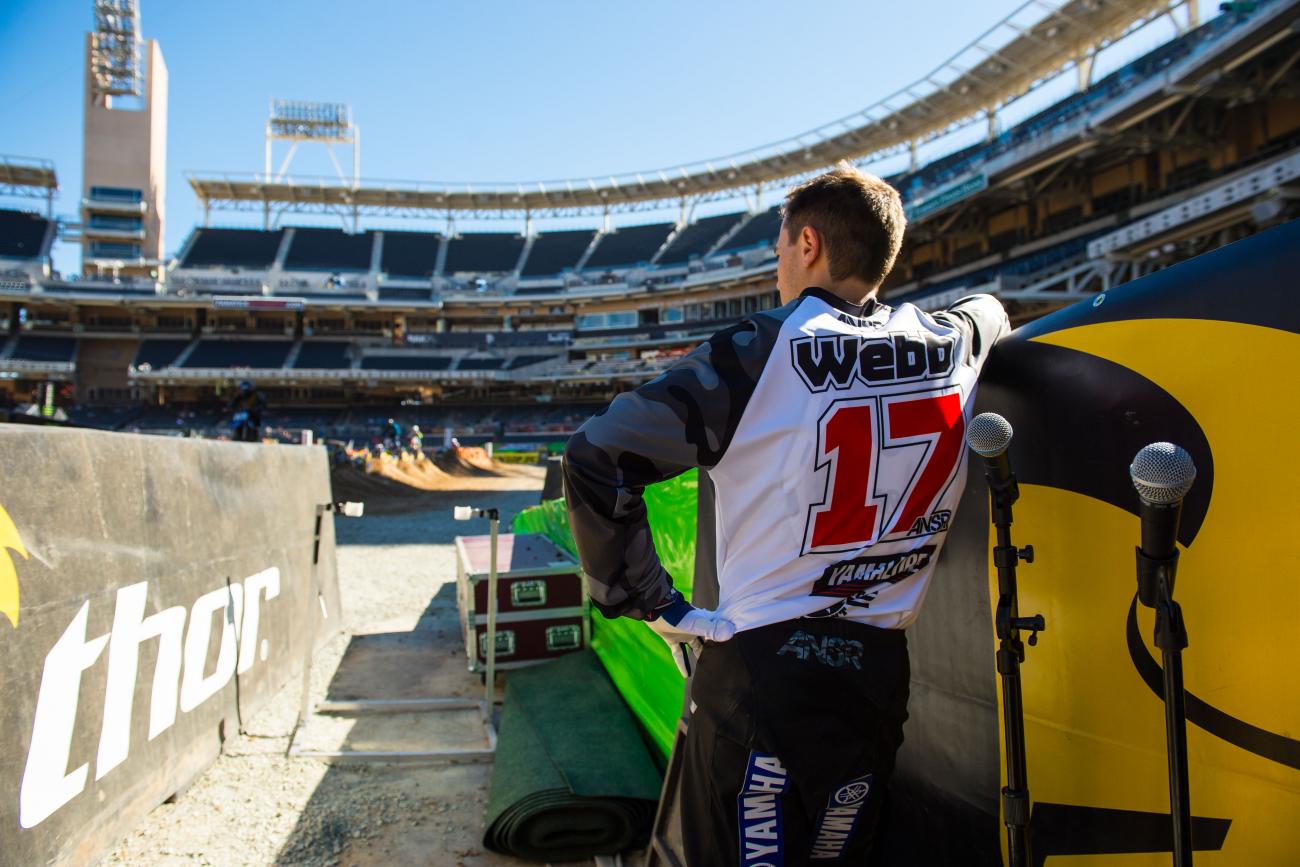 Remember the 250SX West Region? You know, the series in which Cooper Webb has run off four of six and can clinch his first career title this weekend? Yeah, that series. Well, it’s returning this weekend in Houston. With its last race over two months ago (February 7 in San Diego), it’s hard to remember what happened in the series. We’re here to help with a refresher of sorts. How did Webb garner such a big lead? Who is even riding the series? And what about the points, man!!!? We have that and more below.

It wasn’t always the Spider Webb show out west. In fact, after the opener, it looked like Jessy Nelson was the favorite. He dominated at A1, while Webb struggled to a seventh. Then Webb caught fire, and found a nice little rivalry with his “buddy” Tyler Bowers. Man, that was great. Webb took round two in Phoenix, and then again at Anaheim II. Malcolm Stewart bounced back from a twenty-second at the opener to win round four—the first win of his career. Webb won again the following weekend at Anaheim III and entered San Diego with a comfy lead. And then it all nearly went away. Webb crashed hard in practice (catch the video below) and was, if for a moment, questionable for the night show. He soldiered through and won again—his fourth of the season—and put himself in position to clinch the title this weekend. There’s your 250SX West Region in less than three hundred words.

How it Was Won

Malcolm Crashes at Anaheim I

Alldredge Goes for a Ride at A2

Scott Champion - Scaphoid
Champion fractured his scaphoid testing before Anaheim III. He missed the last two rounds out west (A3 and San Diego) but hopes to return for Houston.

Darryn Durham – Wrist
Another year, another injury for the likeable Pennsylvania kid. Durham bent a screw in his wrist at the season opener in Anaheim. He missed the last five rounds, but is expected to return this weekend.

Justin Hill - Ankle
The younger Hill got ran over in San Diego and injured his ankle. He is expected back this weekend.

Michael Leib - Leg
Leib had surgery following a practice crash in Oakland to repair his right tib/fib, right foot, right big toe, and left pinky toe. His status for Houston is unknown at this time. We will have more later in the week.

Currently 30 points clear of Jessy Nelson, Yamalube/Star Racing Yamaha’s Cooper Webb can clinch his first career 250SX Championship this weekend in Houston. With only Houston and Santa Clara left on the schedule, Webb will clinch this weekend under the following scenarios:

1. He wins: A win for Webb is the easiest way to claim the title.

2. A podium: If Webb finishes anywhere on the podium he will also clinch. If Webb were to finish third and Nelson wins, Nelson would only gain 5 points, leaving him 25 back of Webb. But, Webb already has four wins (Nelson can only win twice more, giving him three total) which means Webb would win the tie-breaker.

3. Finishes fourth: Webb could still win the tile if he were to finish off the box. In this scenario, Nelson would have to finish second or worse. If Tyler Bowers, 32 points back, were to win, and Webb finish fourth, he would still clinch the title on a tie-breaker.

As we explained above, Cooper Webb has the championship on ice. But the battle for second is just heating up. Jessy Nelson holds a 2-point lead over Tyler Bowers entering this weekend, with Zach Osborne just 4 back. Nelson is the only winner amongst the group, but is coming off an eighth at San Diego. If Webb runs away in Houston, keep a close eye on how the battle is shaking out behind.

As we noted above, a remarkable eight riders have collected a podium in 2015. It’s not out of the question that the number could reach double digits by season’s end. Josh Hansen and Matt Bisceglia have podium speed. Rookie Chris Alldredge has shown great speed, but also a need to control it. Hansen and Bisceglia each have a top-five appearance this year and could reach the podium at the final two rounds.

It’s been a tough stretch for Darryn Durham. Since his first, and only, career win in New Orleans in 2012, Durham has raced just three rounds of Monster Energy Supercross. He missed all of 2013, raced twice in 2014, and once this year. Like we said, it’s been a tough stretch. Let’s hope Durham can get back to his old self these last few rounds.

Webb, Nelson, and Malcolm. Three names, three winners out west in 2015. Tyler Bowers has had his chances. If his thumb is 100 percent, you can add Osborne to the short list of potential winners going forward. What about rookie Aaron Plessinger? Yep, put him on there. And what about Justin Hill? We all thought he would have a win by now. Webb is rolling—having won four of six—but if he has a problem or rides conservatively for points, we could find winner number four.