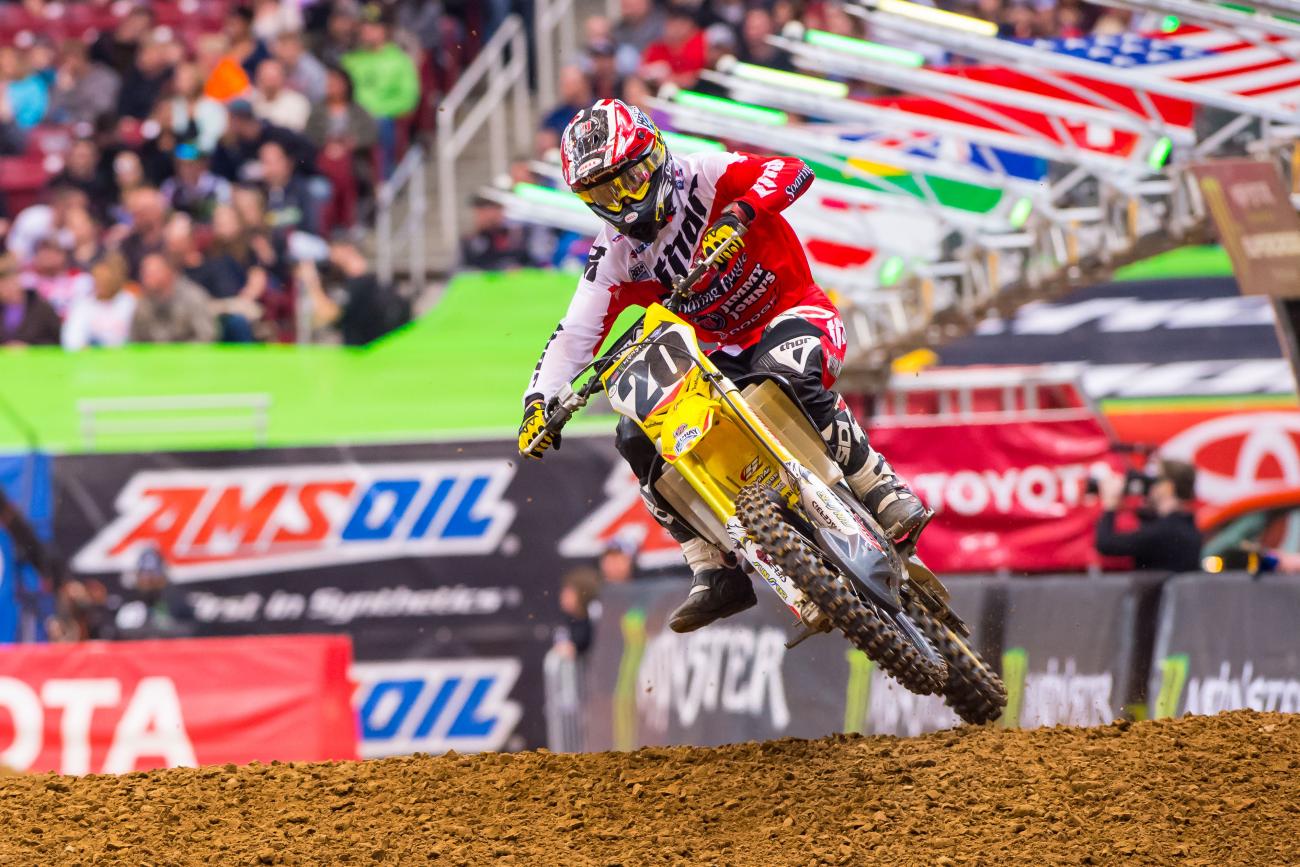 Starts were the undoing of Cole Seely in St. Louis. Following consecutive podiums in Indy and Detroit, respectively, Seely charged from ninth after the first lap to secure fourth. “Tonight was tough. I got off to a horrible start, so I just tried to be smart about line selection and pick my way through the guys,” he said in a team statement. “I got into fourth and felt like I was catching Jason [Anderson] but got a really bad side cramp when I had to avoid a lapper. I made a jerking motion to move out of the way and under my ribs cramped up right away, so I had to just try to maintain the pace I had and hope that Jason would make mistakes, which never happened. The last five laps were tough. I prefer a track that’s more technical, where you need to be precise in each section. I really want to be on the podium, but I’m happy with how far I was able to make it through the pack for fourth.”

Even though the St. Louis pits are indoors and climate controlled, we saw Blake Baggett walking around the Yoshimura Suzuki pits wearing a black hoodie—with the hood up. Turns out he was sick all week, and rode for just ten minutes on Thursday before realizing he just couldn’t go any further. “He’s about as strong as a bird right now,” said team manager Mike Webb. Baggett was able to salvage tenth on the night. “I came in under the weather a little bit,” Baggett said in a team statement. “I got tenth and I’ll take that. I’ll leave healthy and look forward to a week off where we can do some outdoor testing. I’m getting ready for that and looking to regroup for the final rounds of the supercross season. I’ll come out swinging in Houston and look for a podium.”

There was some other news out of the Yoshimura Suzuki camp: James Stewart’s appeal hearing is this week. That means there’s a chance he could be reinstated early if the appeal went his way. That’s a big if, though. No one knows what way the appeal panel is going to rule. We’ll tell you as soon as the verdict is reached.

Josh Grant continues to shine on the East Coast. The Discount Tire/TwoTwo Kawasaki rider, who began the season with an average finish of twentieth through five rounds, has averaged a 7.7 finish since Arlington. In St. Louis Grant hovered around the top five all night before finishing sixth.

After consecutive top-fives in Indy and Detroit, Davi Millsaps wasn’t able to maneuver through the pack in St. Louis. After rounding the first lap in eighth, Millsaps, who said that he struggled with the track, only managed to move up to seventh at checkers. “The track was difficult tonight,” said Millsaps in a statement. “I rounded the first turn around tenth and had to tip-toe around the first lap in traffic. Once we spaced out a bit, I was able to hit my lines to make up some ground, but if someone took your line there wasn’t many options to make passes.” Millsaps got to Josh Grant during the final few laps of the main, but couldn’t make a move.

The St. Louis dirt was unkind to Weston Peick. Currently thirteenth in points, Peick sustained not one, but two crashes in practice. (You can watch one of his brutal practice crashes below.) Not surprisingly, Peick shook off the early damage to run as high as second in the main event before falling back to fifth. Peick now has three top-fives in the last six rounds.

There’s been a behind-the-scenes change at the Rockstar Energy Racing Husqvarna team. Team manager Dave Gowland has accepted a new position as a head man for Monster Energy’s global motorsports division. That’s a big deal, big enough to convince Gowland to exit a team he’s had an intimate relationship with for ten years. Team owner Bobby Hewitt has now moved from Texas to California to fill Gowland’s duties.

While he finished ninth—his eighth straight top-ten appearance—Broc Tickle said he was frustrated by the result. He got a rare good start but was unable to do much with it. “I feel like I’m trying so hard to be better and get better but we’re still struggling,” he said in a RCH/Soaring Eagle/Jimmy John’s Suzuki team statement. “I’m not happy about the main event in St. Louis at all. I had a good start but I still finished ninth. I just didn’t have it in me, I guess.” Tickle said he hopes to use the off-weekend to change things up a bit and do some outdoor testing: “Maybe we’ll change it up a little bit over the next couple weeks and go ride outdoors for a couple of days. Just do something different and then come back to Houston. We’ve only got four more races so the supercross season is coming to an end really quickly. I’m still thriving off trying to podium this season. Even though I’m frustrated, I’m not giving up on it. I’m looking forward to taking a couple of days off for myself and spending some time with my wife. After that, I’ll get back after it and be ready for Houston.”

The top eight guys in 450SX all ran under forty-eight second lap times. That's impressive! Also, note how much time Tomac was picking up by doing the quad. He was fastest on the night.

Impressive lap by J-Mart to steal the top time. Compared to 450SX, only the top four in 250SX were on the same lap time.

Joey Savatgy wants more. Although he ripped off a second straight podium in St. Louis, the Monster Energy/Pro Circuit Kawasaki rider said , “I’m really disappointed with tonight’s result,” in a press release. “I was on pace to win tonight and really felt good after my heat race. When the gate dropped I didn’t get the jump and I had to try and make up the ground. I think had I got into third a little sooner, I could have latched on to them. I know I have the speed to win and I have an amazing bike. We’ve got one more chance to prove it in New Jersey before we square off against the West riders in Las Vegas.”

Justin Bogle’s podium streak has ended at six. A week after securing his first win and drawing to within 13 points of Marvin Musquin, Bogle got a horrible jump off the gate and had to charge through the pack just to reach fourth. "We'll live to fight another day," Bogle said in a press release. "That's the name of this game. Unfortunately, you can't be perfect every time. I'm having a really good season, and I rode really well tonight. I just had that one bad start that I haven't had all year."

GEICO Honda rookie Jordon Smith continues to make the adjustment to professional supercross. Smith got a good start but actually collided with his teammate Justin Bogle and went down. He rebounded to finish thirteenth. "I had a decent start, but I made some bad choices with where I was following people and where I wasn't," Smith said in a team statement. "I didn't get into pileups, but I was getting into where people were stopping. I ended up going down a few laps in and ended up in a pileup."

Fellow GEICO Honda rookie RJ Hampshire missed St. Louis after a huge crash in practice. Hampshire was released from the hospital Sunday and wrote on Instagram that the crash was the one the “scariest” he’s ever had: “Just got released from the hospital, thanks to everyone that has wrote me. Had probably the scariest/gnarliest crash of my life yesterday in the second timed qualifying. Thankful to be in the shape that I am after that crash. Heading back to Florida today, I'll be ready for New York! It's gonna take more then this to keep me down. Thank you to everyone behind me and my whole @fchonda team! #stillgrinding #superman #thisisntfreestylerj”