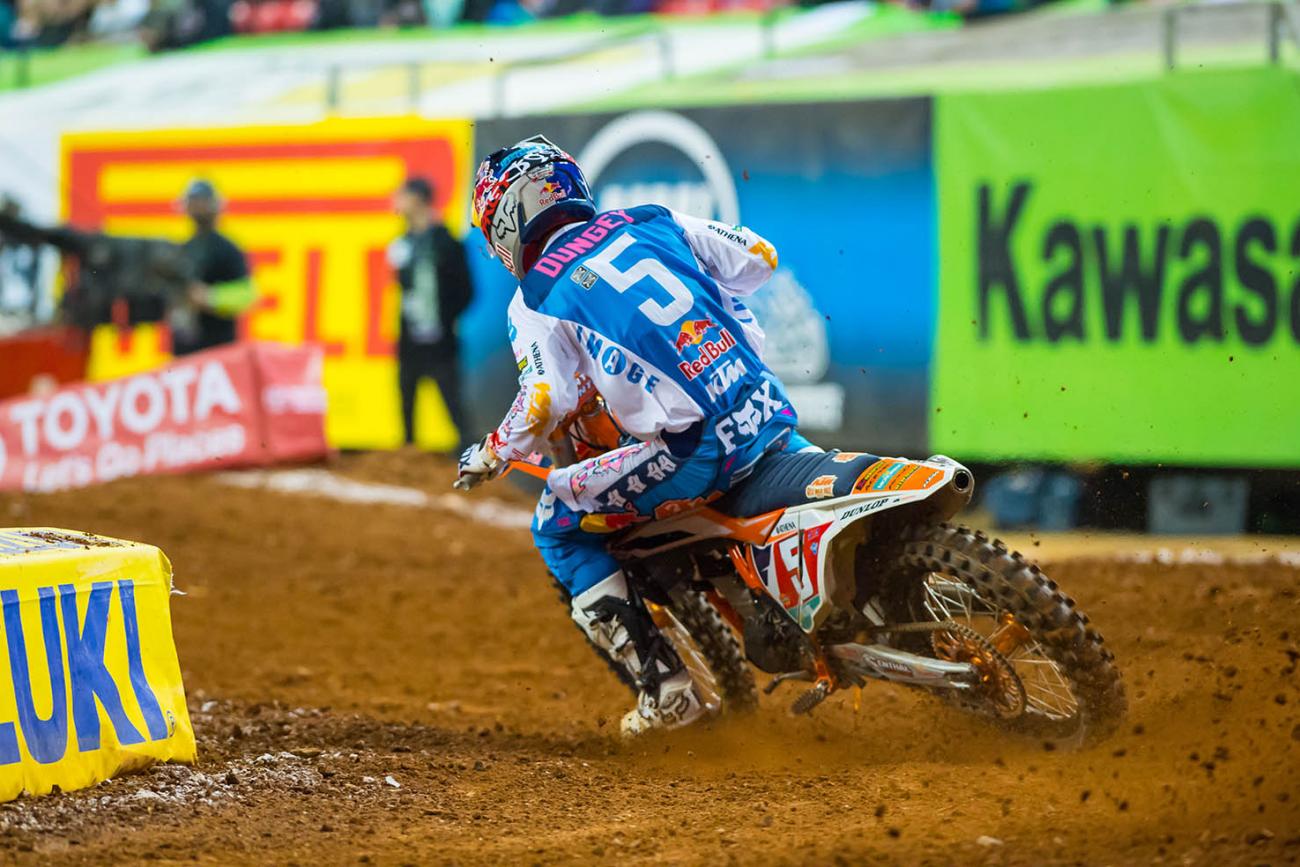 We’re going old school this week for Breakdown. When we first started this feature, we would have ex-pros and/or trainers “breakdown” riders in certain sections of the track. Over the month, and years, it became more and more difficult to do. Eventually Jason Thomas took over the column and made it his own—and it’s a great, great, feature. This week, we’ve decided to throw it back to the original and have JT break some stuff down. Ryan Dungey and Eli Tomac went 1-2 in St. Louis and look set to finish that way in the points, too. To analyze what they’re doing right, we’ll use them as this week’s photo subjects. Enjoy!

1. Dungey is in the standard attack position. Notice his finger on the clutch, ready to adjust RPM at any moment. Also, look how tightly his knee and foot are gripped against the motorcycle. He’s using his legs to keep the bike right where he wants it. Manipulating the bike by squeezing it with your legs is one of the biggest differences between a pro and novice.

2. Ryan is angling a bit to his right and using his legs to counter balance the weight. His left leg is actually pushing the bike back towards the center of the track, away from the Tuff Blocks.

3. Seat-bouncing a triple isn’t ideal, but when coming directly out of a turn, it can be necessary.

4-6. Dungey is using the berm here to turn, but he noticeably hits his apex early. He goes a bit wide in the beginning of the berm and pivots mid-turn in order to make the next section a straight line. He can then accelerate hard towards the next turn. Had he arced further into the berm, he would be in a continuous turn and unable to apply full throttle until much later. Kevin Windham was a master of this, especially when four-strokes were still relatively new to the supercross scene.

7-14. Dungey is getting a bit wild out on the start but fights through it. He’s doing everything he can to keep the front end down, keep from veering left into Cole Seely, and also avoid engaging the clutch. He is using all of the body so he can to stay in the throttle and keep accelerating. He rides a wheelie from start to finish but never has to relent on his acceleration. If he checked up for even an instant, Seely, Trey Canard, and Blake Baggett would squeeze him out of a good start. This is a prime example of Dungey’s ability to make the bike do what he wants instead of being merely a passenger. From the first picture, it would appear that he’s going to get a poor start. His body positioning is nowhere near ideal. It looks like he’ll be behind Seely entering the first turn, as Cole is looking picture perfect exiting the starting gate. By the last frame, though, we can see that Dungey never relented and has pulled slightly ahead. It may not have been his ideal starting technique, but he stayed committed even when things were a bit off.

15. Ryan is leaning over here in a moment from St. Louis. This was the inside option lane and there was a double exiting the turn. The key here was to be smooth. Accelerate, yes, but in one fluid motion. Being too aggressive was a mistake that a few riders made, notably Weston Peick in practice. He grabbed a handful of throttle and shot his 450 about thirty feet into the next lane.

16. This is my favorite picture of the bunch. Ryan’s technique here is as good as it gets. Notice how far forward he is on the seat, giving him the ability to turn at will. He is using his foot as a rudder to stabilize himself and is about to unleash hell on the Atlanta dirt. His technique is ideal. His upper body is forward in anticipation of acceleration, his torso is forward to give him ideal front tire grip, and his lean angle is great for staying inside on a long wide corner.

17. This picture is a bit uncharacteristic for Ryan. He’s leaning much further to the outside than he would like to be. Although he’s fighting hard to keep his body weight on the low side of the turn, the momentum is making the bike stand up. This can often be the result of entering the turn at too sharp of an angle or applying too much rear brake.

18-20. Eli Tomac is performing a scrub before the St. Louis whoop section in this series. There was a single before entering the whoops, and ideally Eli would want to carry as much speed over the single without leaving the ground. You can see how much lean angle is on his front wheel from him turning on the face of the single. That turn absorbs speed and keeps him from jumping fifty feet past his landing spot. This is a very, very advanced technique and not one for everyone to try at home. Turning on the face of a jump will end very badly if you don’t know exactly what you’re doing. Luckily for Eli, he knows exactly what he’s doing.