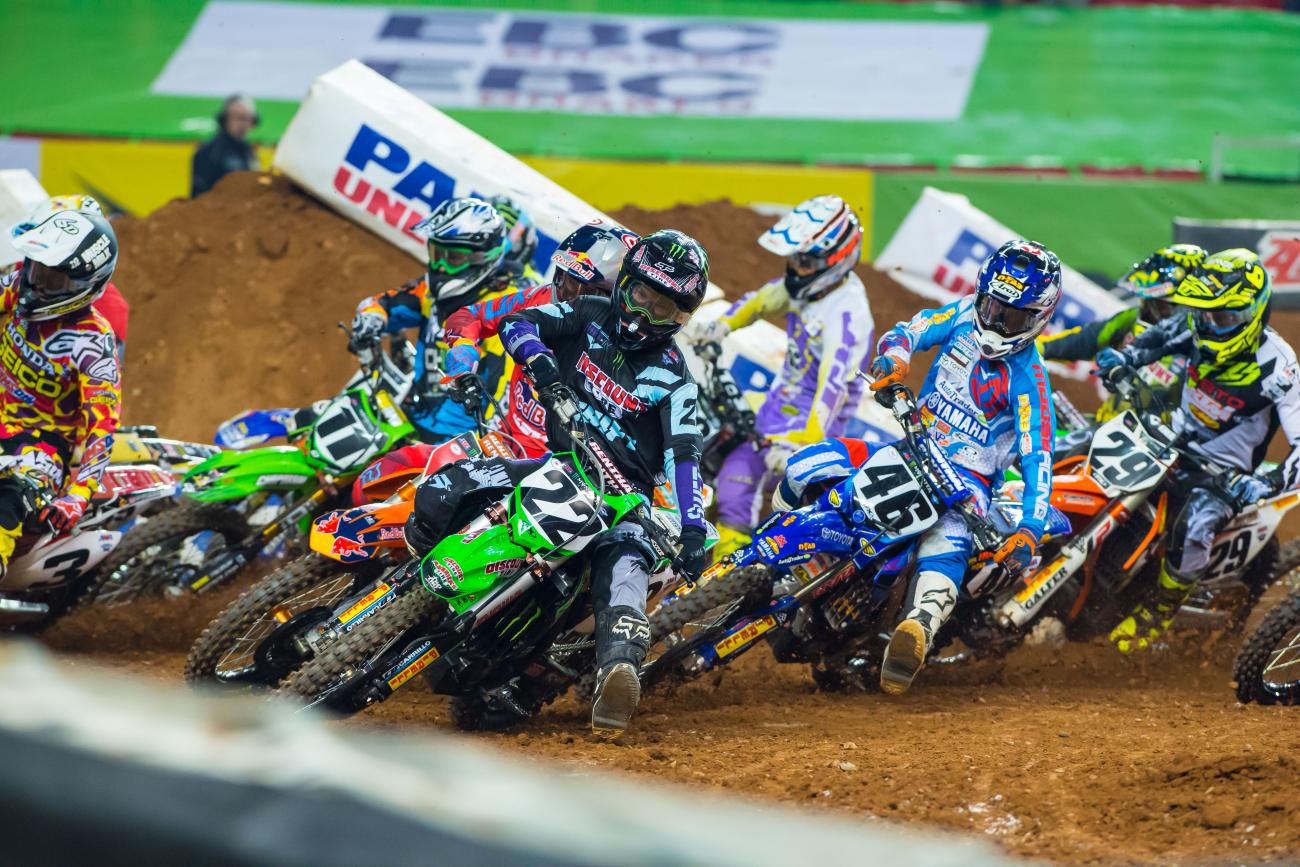 For 2015, Racer X has partnered with MotoDynasty to bring you Fantasy Supercross. We’ll be offering cool weekly and series prizes; dynasty play; private leagues that just you and you’re buddies can play in; weekly fantasy previews; and weekly podcasts all focused on fantasy. Each week, make sure to check out this preview, which explains how scoring works, how to play, and maybe even how to win. Or visit motodynasty.racerxonline.com.

How many got it right?

The 250SX East Region has become a cakewalk for you guys. Marvin Musquin, Jeremy Martin and Justin Bogle have been on the podium the last two rounds. That’s not the impressive part, though. Amazingly, 65 percent, 53 percent and 60 percent had them in their correct finishing positions last week. Another 51 percent tabbed Ryan Dungey for the 450SX win. Great week, folks. Read on and let us help you once again become a master of your league.

As we've said, it’s vital to study qualifying to make good picks, but one must use caution. In 450SX last week, times were so close to finishing positions, we’ve decided to just look at who was On Point.

Need a refresher on how scoring works? Go here. Want to view the scoring chart? See below.

Nine rounds in and a lot of small trends are developing. Kyle Chisholm and Phil Nicoletti won’t set the qualifying world on fire, but that doesn’t reflect their main event results. Musquin, Bogle and Martin have started to separate themselves and Blake Baggett and Broc Tickle have become top ten fixtures. Check out below for our top picks and sleepers this weekend.

Andrew Short | Last week: 15
Short was ill last week, so look for him to return to the top ten—he had three straight prior to last week.

Weston Peick | Last week: 10
Peick has been riding great, but his fitness has taken a hit due to injuries. A tough Daytona won’t help. Fifth to tenth is a good pick.

Josh Grant | Last week: 6
Following a horrid start to the season, Grant has been a top ten machine. He has three straight. Look for a fourth this weekend.

Vince Friese | Last week: 13
Friese struggled last weekend, but look for him to bounce back. Top ten is a good pick.

Kyle Peters | Last week: 11
Through three rounds Peters has an average finish of 11.3. Around tenth is a good spot.

RJ Hampshire | Last week: 9
This is Hampshire’s home race. I like another top ten from the rookie.

Joey Savatgy | Last week: 4
Should be a top five mainstay in your picks.

Again: YOU ARE NOT GOING TO PICK UP POINTS PICKING RYAN DUNGEY FIRST-THIRD. Just not going to happen. Don't go all crazy if you pick Dungey to finish second, and you nail it, and still lose ground. Even if you hit it on the nose, chances are half of the competition will as well. You pick up points further down the field. Let’s take a look and who may or may not have made up some ground last week.

- .02 percent had Broc Tickle fourth or better; he finished fourth

- 46 percent had Nick Schmidt making the main; he finished twenty-first

- 6.3 percent had Blake Baggett fifth or better; he finished fifth

Last week was rough—we’ll leave it at that. A two for six showing is nothing to be proud off. Luckily for me, I forgot to make any of these picks. I’ll stick my neck out there again—proceed at your own risk.

ADVICE FROM THE SO-CALLED EXPERTS

Ummmm, I guess Jordan did okay last week? Kind of hard to tell, because he really only made a couple picks. He did move up in the standings, so all in all I guess a good weekend. Weege is back to throw some fire (terrible) picks.

1. Blake Baggett has been top-five material for weeks now, and he absolutely hauls at Daytona. I’d say fifth is a safe bet, BUT we’re into the second half of the season. The time for safety is over! If you’ve put yourself in a good points position already, go and put Blake in for a podium. If he makes it you’ll make up ground on everyone and if he doesn’t you won’t lose a ton if he does get fifth.

2. I know I just went nuts on Baggett, but besides that, don’t go too crazy overthinking Daytona. It’s tempting to weigh each rider’s outdoor skills, fitness etc. but for the most part the results here mirror what they do at any other supercross. So stick with what you’ve done before. Except for the man above.

3. I’m still not convinced on Weston Peick’s fitness, especially on a rougher track like this. He was so fast that last two weeks that he makes for a tantalizing pick, but I’d stick him toward the back of the top ten still. One of these weeks he’s gonna podium. Not yet.

4. Joey Savatgy remains a sleeper podium threat in the 250s. I said this before Dallas and he came through for me. Like Baggett, you can make up points by pulling a podium out when everyone else just goes top five. You need to take risks if you’re going to win this something!

5. Everyone is going to pick Ryan Dungey to win the race. Everyone. He’s on a roll, he’s strong and fast and hasn’t won this race before, so there’s a feeling of inevitability. So, you have a choice: go with the safe pick like everyone else, or pick someone else who flies at Daytona (like Chad Reed) and make up huge points. I’m getting beat by Steve Matthes in our Racer X league and I CANNOT let this continue. It’s time to take chances and make up ground. THE SERIES BEGINS AT DAYTONA.

Winning is awesome. Congrats to these winners from last week. You’re all number one (two or three) in our book.

If you didn’t win, don’t freak out—there’s always this week. Check out what we have on tap.

Want to challenge the Racer X team? Here’s your chance. Each week we will run down the top five in the overall standings of the Racer X Fantasy League. Did you destroy us this week? Let us know in the comments.

Thanks for coming out. Have any questions or suggestions, hit me up at chase@racerxonline.com or on Twitter.