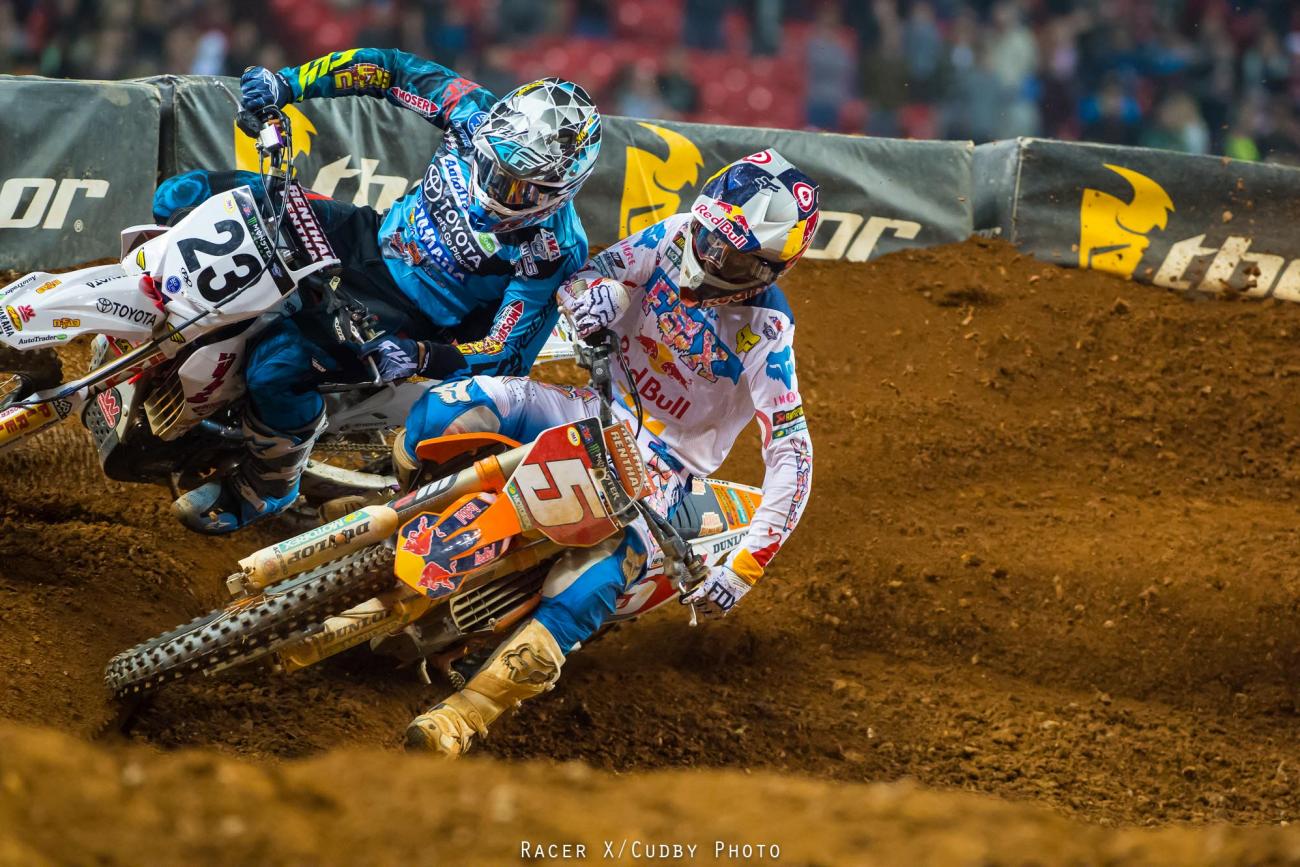 Monster Energy Supercross is back in the Georgia Dome in Atlanta. Read on for all the latest.

Fighting scratching clawing for the first turn, Chad Reed and Ryan Dungey both wanted the holeshot badly, but the contact let Weston Peick square up the first turn and emerge with the holeshot. Is that the first holeshot ever for Peick? Reed passed him but Peick came storming right back to retake the lead. He then led a few laps--also a first--while Reed and Dungey raged behind him. The crowd was anticipating another Reed run, but then he made a strange bobble leaving a corner and tipped over.

This put Dungey into second with Honda riders Eli Tomac and Trey Canard behind him. Dungey went after Peick and they battled hard, while Tomac and Canard tried to close in as well. Finally Dungey made the pass, and then Tomac, Canard and Peick went three wide in a corner fighting for second. Canard came through with the spot, and he was close to Dungey for a bit, but in the second half of the race Dungey kicked it into gear and took off. There would be no stopping the KTM rider from his third win of the year.

Tomac got Canard back with a few laps to go when Canard bobbled, Canard recovered for third and the podium was set. Peick got swallowed up into a huge battle with Broc Tickle, Jason Anderson and Ken Roczen. Tickle got through for fourth, then Anderson tried block passing Peick and they both went down--and collected Roczen with them. Blake Baggett had been stalking the group and moved into fifth. Tickle's fourth was darned strong.

Late in the race Roczen seemed to be struggling with his bad ankle, and Josh Grant and Reed rolled past him. Anderson and Peick recovered to round out the top ten.

After last week's big 250 battle, the boys were hungry, and you could see them scrapping into turn one, bars banging and all. Red Bull KTM's Marvin Musquin snuck to the inside under the contact and emerged with the lead, and then Justin Bogle, Jeremy Martin and Joey Savatgy all banged into each other again and lost ground.

This put Monster Energy Pro Circuit Kawasaki's Arnaud Tonus and Riverside Harley's (yeah, privateer) Jimmy Decotis to second and third, but Martin was on a mission and forced his way back through to second on his Yamalube/Star Yamaha. By then Musquin had a solid lead and then actually continued to pull away. He'd go on to his second win of the season. Martin finished second and GEICO Honda's Bogle followed him through for third. Tonus started fading, and his teammate Savatgy got past him for fourth. On the last lap, Decotis was putting all sorts of heat on Tonus and then leaped inside of him with a gutsy pass--it worked, and the privateer stole fifth.

Davalos grabbed sixth when Tonus was slowed by the Decotis pass. Anthony Rodriguez had a fall but finished eighth, RJ Hampshire and Luke Renzland rounded out the top ten.

Kawis at the front of semi one, with Josh Grant, Davi Millsaps and Jake Weimer first through third. Josh Hill took fourth and Jimmy Alberston rounded out the final transfer spot--Nick Wey got sixth, closed on Jimmy a little, but is LCQ bound.

Next up Broc Tickle won semi two over Cole Seely and Jason Anderson. Phil Nicoletti was fourth over Mike Alessi, but Nicoletti was penalized for jumping under the red cross flag, and that put Kyle Partridge into the main. Nicoletti has to go to the LCQ.

Typical battle of death here, Kyle Peters wins it, RJ Hampshire came from way back to get to second and nearly steal the win. Behind them, pure chaos. Jordon Smith made a bid for the main in his debut and crashed, Ryan Zimmer and Nick Desiderio collided...Daniel Herrlein stole the last spot. Josh Cartwright got third. The main is now set.

Oh this Chad Reed guy. First, he wins last week and pumps everyone up. Then he comes out in opening ceremonies on a KX250 two-stroke and pumps everyone up. Then he holeshots his heat and holds on to win under heavy fire from Eli Tomac. Crowd loved it! With Chad in his groove, every night could be retro night. Tomac was second, Weston Peick third and Ken Roczen, riding with that bad ankle, was fourth to get the final direct transfer. Poor Davi Millsaps was fifth but crashed--he's been beaten up so much this year. Broc Tickle got to fifth, Davi recovered for sixth, but both are semi bound.

In heat two, Ryan Dungey nabbed the start and, well, you know the rest. Trey Canard got yet another terrible start (it's been a bad trend for him this year) but railed through for second. The real battle was for the final transfer, with Andrew Short, Blake Baggett and Cole Seely logging the battle of death for the last two positions. Seely had Baggett squared up several times, but Baggett made the right moves to stop him and hold on for the final spot, with Short just ahead in third.

In Heat one, Vince Friese grabbed the holeshot on his SmarTop MotoConcepts bike, but this was Arnaud Tonus' chance to shine. In his first good start in the US, he took the lead from Friese and looked good for a bit...until bossman Jeremy Martin charged through to get the lead. Martin is really, really good. Then Matt Lemoine worked his way past Friese and Tonus to take second. Martin Davalos was down early but worked his way into a transfer.  Top nine to main: J Mart, Lemoine, Tonus, Rodriguez, Friese, Starling, Cunningham, Davalos Renzland.

Heat 2, Justin Bogle grabbed the start on his GEICO Honda and rode better than he has so far this year--he simply checked out on Joey Savatgy and Marvin Musquin. Musquin tried making a late move on Joey and crashed, letting everyone's favorite rider, Jimmy Deeeeeecotis to 3rd. Jace Owen, Dakota Alix, Colt Nichols, Gannon Audette held fifth through ninth, and Bryce Stewart held the final transfer on the last lap. Heat was coming from RJ Hampshire, who crashed on the first lap. In the whoops and the final turn, Hampshire tried to make a move, but Stewart just barely edged him for the direct transfer. Hampshire will join his fellow rookie teammate Jordon Smith in the LCQ.

Eli Tomac and Marvin Musquin topped these sessions, but Ryan Dungey's time in the first session held up as fastest overall. Musquin's time in session two was just barely quicker than Jeremy Martin's from the first session, so he's first overall in the 250s. In general, we're seeing the usual suspects up front, but Ken Roczen did leave the track a few laps early in the final session, we'd think his ankle is still sore from last week. He did ride during the week, but no doubt there's still some residual from that big crash last week. It feels like deja vu as we wait to find out his status for the night, but we'd put a lot of money on him racing. (Update: Yes, Kenny retweaked his bad ankle from last week. Yes he's going to race, though)

Tight track with big whoops? No problem. The boys knocked out quick laps early and before long the top 450 guys were into the 53 second range. Unreal. The dirt looks tackier so far compared to last week, but the obstacles are routine--no crazy balls opportunities tonight whatsoever. The race will be won in the corners and the whoops. Here are practice times

Monster Energy Supercross is back in the Georgia Dome for the second straight weekend, but this one has a twist: it's a retro night. Lots of teams and gear brands getting in on the act, stay tuned to our Instapics to get the flavor of the event. Or, just find that buddy of yours that's "stuck in the 80's" and set him loose. There's a nice variety going here, Yamaha, for example, telling the JGR men to go 1990 style white/red on their 450s, the Star Racing squad to go late 1970s early 1980s yellow/black, and the Rock River team the even older early '70s red/white. Chad Reed and Josh Grant have mid-90's Kawasaki graphics, Blake Baggett is way old-school on his Suzuki....we'll let the pictures tell the story but suffice to say there's more retro participation here than at the last few of these throwback events.

Hey and the track has an old-school element with the over/under bridge, and a generally tighter layout than last week. The whoops are super gnarly, there's a cool sand turn section after the bridge, and four solid 180 degree bowl berms to do some passing. The dirt also was pretty wet this morning, more so than last week's very dry surface, but most think it will end up about the same once the night show begins.

As for the racers part, Chad Reed is riding the momentum from his win last weekend. He looked frisky in the untimed practice--which although not timed officially, he was second fastest in it. That's good for Reed, who is never a highlight guy during practice. The usual players like Eli Tomac, Ryan Dungey and Trey Canard were quick, too. With Dungey holding a 25-point lead in the championship, it's go time for anyone looking to stay alive in the championship. They need to beat Dungey consistently, which is a tall order the way he's riding right now.

Timed practice is about to begin, we'll be right back with more.