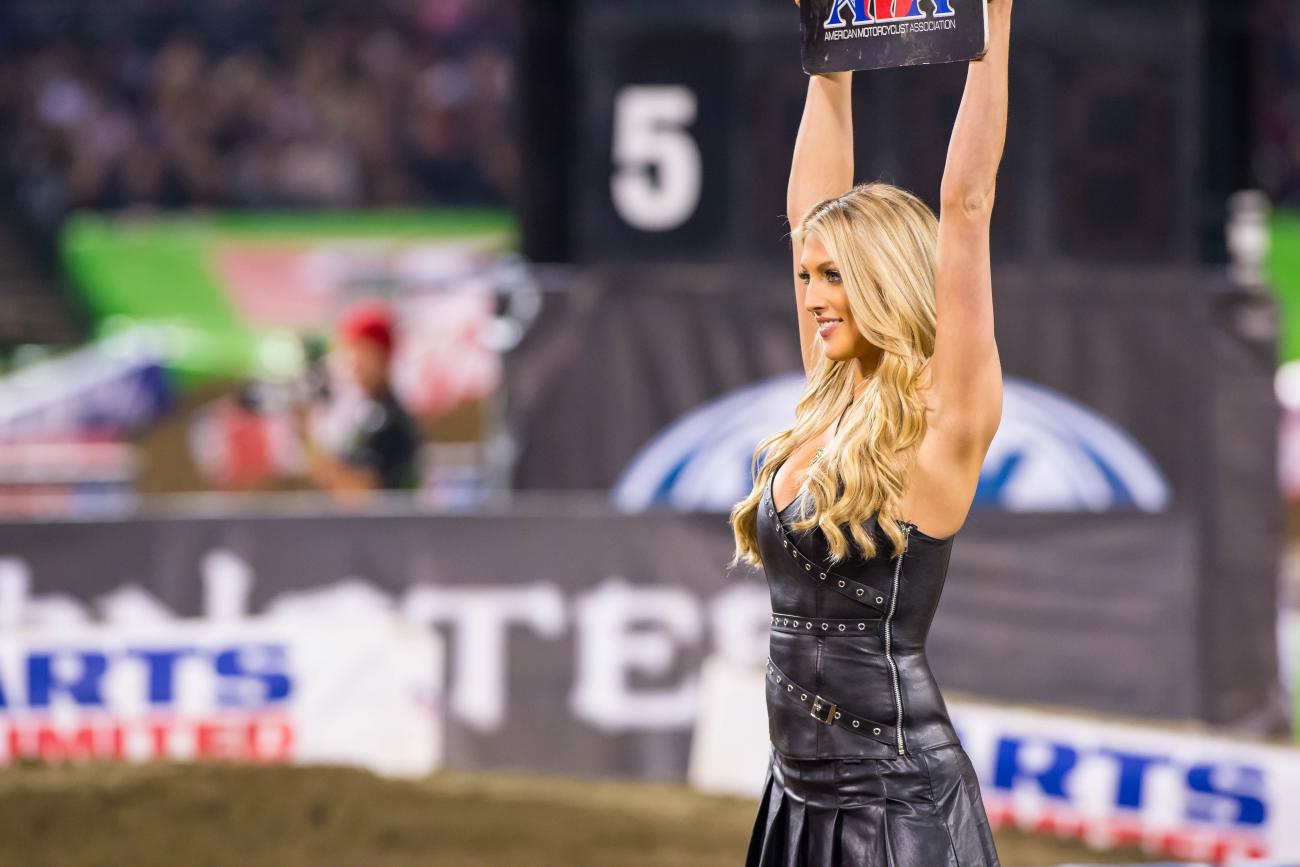 Back the truck up! Pump the brakes! We're headed back to the Georgia Dome! Or, actually, most of the teams aren't heading anywhere, because the pits will remain in place all week down there, and all the trucks are still parked in the same spots. That's pretty cool.

But, maybe it's also a little boring. What's a guy to do when he expects to travel and doesn't have any traveling to do? How about check out some cool videos and links from around the web? Yeah, sounds good, and you non-trucker folks can tag along, too. Enjoy.

@teammafiamotocrew setup for the ATL2 retro race is inspired by @oshow1 and the very unique kit by @ansrmx circa 1990. Got to love the 90s! Thx @ansrmx and @oneindustries for the extra effort. #team #mafiamotocrew

The 87th Academy Awards were last Sunday. Birdman won Best Picture. Some guy named Eddie Redmayne won Best Actor. Blah, blah, blah. No one cares about that stuff. (We lied, a bunch of people do.) It got the staff at Racer X kicking around some ideas on mid-season awards in Monster Energy Supercross. Without further ado, here are our picks.

Anything with Miss Supercross is fine by us!

Love it or hate it, Tyler Bowers brought some drama to supercross this year. He not only got into a battle on the track with Cooper Webb, he then blew it up on Twitter, and even talked some trash on a Fox Sports 1 feature. That’s versatility!

Trey Canard has been the best passer this year, taking the script he’s given and making the most out of it. Well, except for that one Chad Reed deal at A2. That got critics talking!

Andrew Short superfan Cory Moser, who someone managed to take an "‘Usie” of him and Shorty DURING opening ceremonies in Phoenix.

Well, Ellie Reed has come to one race this year, and Chad Reed won it. Undefeated!

Weston Peick’s career. We’ve literally never seen anything like this.

Jake Canada’s career, which has had some ups and downs, and has now concluded with a retirement announcement a few weeks ago. Wait…Canada isn’t even foreign???

Hide the small children, folks, this is some scary sh**. At the Aero India in Bangalore last week, two Red Bull aerial acrobatics stunt planes collided in mid-air over Yelahanka Airforce station. Although the planes suffered damage, both pilots were able to land safely and unharmed.

If you live on the East Coast, you know last week was on of the coldest on record for some cities. Washington, D.C. got down to 5 degrees, its coldest February 20 since 1896, according to Slate. It wasn’t pleasant. But, it did provide one of the coolest drone videos this year. Canadian videographer Brent Foster captured this amazing footage of a nearly frozen Niagara Falls on Friday morning. Check out it below and visit Slate for more.

Why did I not know this existed? And where do I sign up? Deadspin has the details. While you’re doing that, me and White Goodman will be forming a terror-squad. “Nobody makes me bleed my own blood. Nobody.”

Okay, this is probably the cutest thing ever. Discount Tire has released their second commercial featuring Chad Reed and Josh Grant’s young sons, Tate and Wyatt. Grab some tissues, you may need them.

The International Consortium for Investigative Journalism recently published a big story, which alleged that “the private Swiss subsidiary of British bank HSBC had been knowingly profiting from the tax evasion of wealthy clients.” That’s a pretty noteworthy story in and of itself. It got juicer when reports surfaced that certain British media partners were covering up the story to continue receiving advertising from HSBC. That’s a pretty big no-no. Alberto Mucci of Vice talked with Gerard Ryle, head of the ICIJ offices in Washington, D.C., about how the story—which according to Vice involved over 130 journalists—was put together. From Vice:

After further weeks of work, we decided that we had seen enough in the material to warrant public interest.

At that point, we took several further steps. We began inviting selected reporters to Washington to look at the material, to get further opinions on its public interest. That process began with a reporter from the BBC's Panorama program. Then a reporter from the Canadian Broadcasting Corporation, etc. Each reporter, in turn, found the material to be of public interest.

At the end of that stage we reached out to dozens of media partners and invited them to a meeting, at their own expense, at Le Monde's offices in Paris. The group discussed the issues the material threw up and we decided by the end of the day that we would publish the following February.

David Beckham, global soccer icon, famous underwear model, and husband to Posh Spice, is apparently having trouble securing land for a stadium for his new MLS franchise in Miami. Not surprising—it involves shady local politics, and a major corporation trying to block the move. Not looking good for the Becks. From Elliott Tuner at Vice Sports:

Over a year later, the questions remain. Instead of using his charisma to charm local officials into accepting a favorable stadium deal, Beckham has become mired in the cynical, cutthroat world of South Florida politics. Both the the City of Miami and Miami-Dade County have shot down his stadium proposals. Why? The same PR machine that polishes Beckham's airbrushed image would rather the rest of us not know. So I tracked down corporate records and sent public information requests to the City of Miami and Miami-Dade County. What emerges is the story of Team Beckham walking into a quid-pro-quo environment it was too naive and unprepared to handle.

For starters, Team Beckham picked a bad time to foray into stadium-building in Miami. The well was already poisoned. Marlins owner Jeffrey Loria fleeced Miami-Dade County for $3 billion to finance a stadium in Little Havana that, as of 2014, basically sat empty. In fact, in 2011, Miami-Dade County Mayor Carlos Alvarez was ousted in a lopsided special vote in part due to that sweetheart deal he gave Loria.

RV vs AC… on Social Media

The opening round of the FIM World Motocross Championship from Qatar is this weekend, and all anyone can talk about is RV vs. AC. (Although Paulin, Desalle, and others probably have something to say about that.) While we won’t know until after this weekend how they matchup on the track, thanks to the guys over at Hookit, we know how they match up on social media. Hookit tracked the two over the month of January, and in the chart below (RV-red; AC-blue) you can see a visual comparison of their interactions over all their social media in the month of January.

Race on the Moon

Last week, we told you about going to Mars—which is very, very cool. The twist: you probably won’t be coming back. But, we have another option. RACING ON THE MOON!!!!! Jalopnik has more details, but make sure to check out the video below.

Matthes has been a little forgetful lately on sending in podcasts. Probably has something to do with his beloved Maple Leafs getting popped for PEDs. He finally sent something in this week. Take it away, Steve.

Thanks, Chaser. Well, here's a classic podcast from the past with former factory Kawasaki and Suzuki rider Robbie Reynard. Once labeled a "can’t miss" kid, it can be argued that despite a long career with many top finishes, he kinda missed. Reynard never went on to greatness like many predicted, and most of the reasons why is because of injury. This dude racked up some serious IR time.

Listen to this classic pod where Robbie lays out his career, his surgeries, beating RC, battles with Kawasaki management, and much more. Robbie Reynard is good people.

CHAD REED WINS IN SOCIAL TOO

Chad Reed’s first win of 2015 in Atlanta was a hot topic, on and off the track. According to Hookit, Chad led in both Facebook and Twitter stats after last weekend’s win. Furthermore, he saw a considerable jump in all interactions. Check out the stats below.