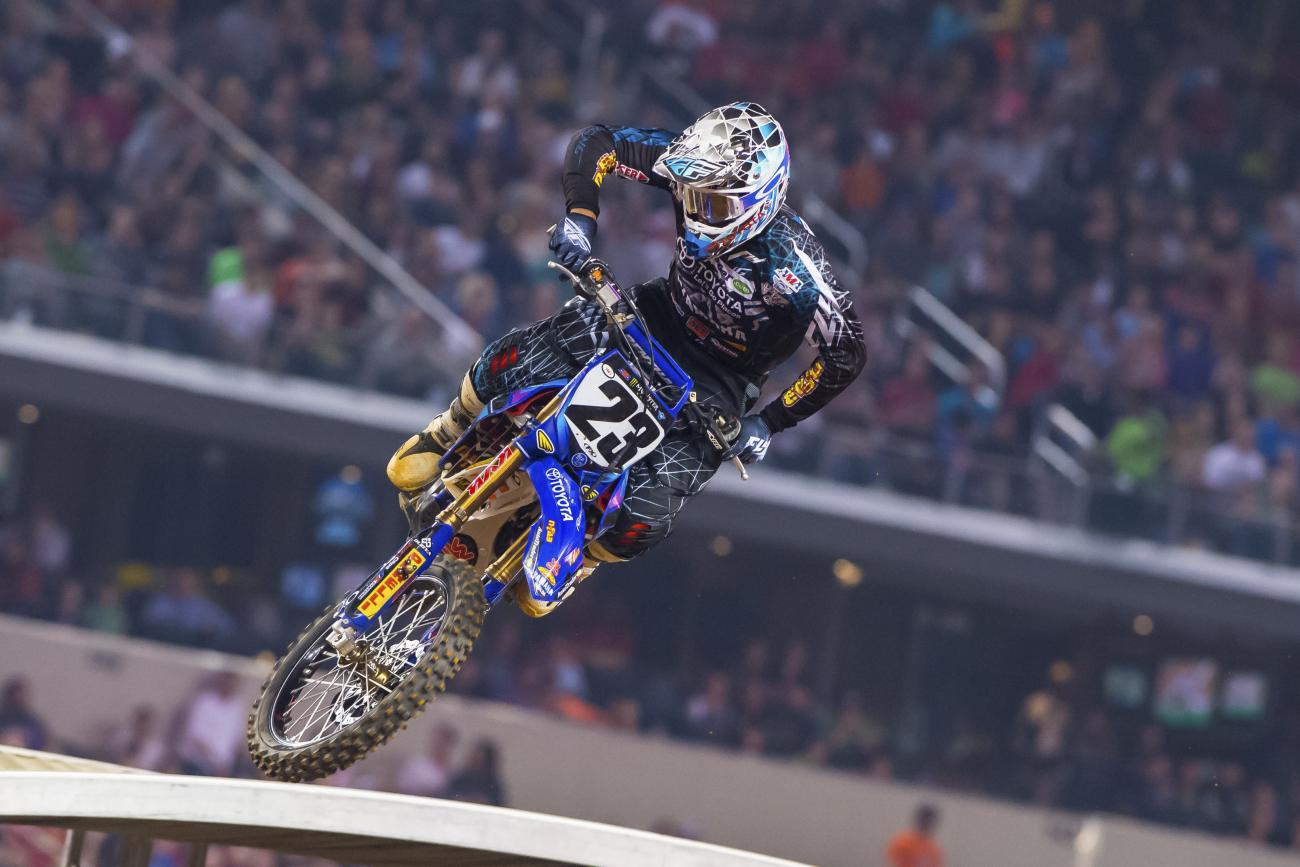 3 on 3 Questions from Atlanta

1. Uh oh, 25-point lead for the ever-consistent Ryan Dungey. Could this possibly be over already?

David Pingree: It's still way too early to be handing over the number-one plate. There are a million laps left before the checkers drop in Vegas, and this sport can reach up and grab you at any time. That said, if Dungey wins the title and we could back to this point as a moment of clarity in the series. Tomac, Roczen, Reed, Barcia, and Canard have all had their troubles and fallen back in the points chase while Ryan just keeps reeling off podiums and grabbing wins here and there, which is the exact formula for winning titles—so I'm told. There is no question who's in the driver's seat right now, but let’s get down the road a bit before we start to warm up the fat lady's pipes.

Jason Thomas: It's definitely not over. BUT, if you polled the pits, Ryan Dungey might be the one rider you would be most worried about with such a lead. Normally, Dungey is consistent but doesn't amass huge leads because he doesn't reel off a bunch of wins. Oh, and now he doesn't have to contend with Ryan Villopoto, either. Dungey has been in this situation before and knows how to manage a championship. He should feel very good right now. Sure, the other contenders have had at least one bad night and Dungey hasn't. They will point to that and say it's a matter of time. Sometimes it isn't though. Sometimes riders just keep on getting podiums and run away with it. It wouldn't surprise me at all to see this lead keep increasing with the way he is riding. His starts are better than ever and his confidence is growing weekly. If you have a stupid friend that's willing to bet on anyone but Dungey for this title, take full advantage of your stupid friend and laugh all the way to the bank. Okay, that's maybe not cool to do to a friend but you get the idea.

Denny Stephenson: Honestly the easy answer would be to say yes due to how consistent Dungey has been so far. But if you look back, he's also lost a couple titles due to simply weird circumstances: a meltdown on the 250 and a few mechanical problems while at Suzuki. And again, this is supercross. Usually anything can or will happen, and nothing is ever given. It’s why they line ‘em up every Saturday night! But it’s down to Trey and Ken at this moment, obviously. Like Fro said last Saturday night, if Canard or Roczen doesn't win or at least beat Dungey, it’s a failed weekend. Well, the German crashed and the #41 played catch up to salvage a third. I already made my bed early this season, claiming my boy Carey Hart's rider was going to win the title. I can't turn back now. But he and Trey have their work cut out for them, and the Diesel looks unstoppable at this point. This is why I don't gamble in Vegas.

2. Weston Peick has advanced from border-line main eventer, to a lapped rider, to podium speed. We've never seen this before. How is this possible?

Ping: Jeff Stanton rode from obscurity to six-time champion. John Dowd came out of nowhere to be a top factory guy. It happens but it is very rare. Weston has an incredible work ethic and he just isn't taking no for an answer. He races everybody hard, but fair, and he continues to improve. He's been a very pleasant surprise for the JGR guys, and I don't think he's hit his ceiling yet.

JT: IF I KNEW HOW TO DO IT, I WOULDN'T BE WRITING THIS. I’D BE RETIRED FOREVER AND LIVING OFF OF MY PODIUM BONUSES. Okay, maybe I would keep working because I enjoy my role now, but I definitely don't know how Weston’s managing this learning curve. It's truly impressive, because I raced against him and used to laugh at how bad his supercross skills were. Then he reached a level where we battled it out regularly; then he kept on going all the way to an elite level. This is not normal, folks. Whatever he is doing, it's working. I know how hard it is to improve, even in small amounts, and he is progressing by leaps and bounds. Cool story and it's just getting started.

Stephenson: I have two words for you: Buddy and Antunez. He’s been one of my best friends since he rode minis, and now he's coaching this animal. But, seriously, I tried looking back to find a rider comparable to what Weston has accomplished, and the closest thing I could think of was Jeff Stanton. Clearly Peick hasn't reached six-time status, but for a rider with little or no amateur hype and no races at all in the 250 class to simply succeed in the big boy class is crazy. This is what Weston is doing! How can you not be a fan of this guy? I really liked watching him during some of his early successes, where he would crash into a series midway through, throw down top-tens, then go back home. Do you realize how difficult that is? Imagine being a decent college basketball player and stepping on to the court with Bulls for game thirty of eighty-two and dropping twenty on Lebron and the Cavs. It doesn't happen. It can’t be done. But don't tell the grizzly Weston that, because he might kick your ass. And lastly, check out his smile when he's being interviewed. He's having the time of his life. Having fun is half the game. Maybe some of these other guys should realize this and enjoy it while the ride lasts.

3. After that awesome 250 battle, does the title picture look different?

Ping: Prior to the East Region, I pegged Jeremy Martin as the title favorite. I knew Musquin would be fast and I knew Bogle and Davalos would have good nights, but momentum is on Martin's side. Going back to last May where Jeremy won the Las Vegas finale, his first supercross win, he has been on an absolute tear. He demolished the field last summer en route to his first title, and that experience and confidence can't help but shine through. I was scratching my head a bit after Dallas, but in Atlanta I think we saw the Jeremy Martin I expected to see. He was fast and consistent, and his race craft was very calculated, the same way he was all summer long. Marvin isn't going to just let him have it, but I think Jeremy is in a good spot right now. This will be a fun title fight to watch.

JT: I don't think the result will change, but it may be more interesting. I still think Musquin will win this but Martin is much better than I expected. What I saw in Dallas is what I expected every week: Musquin being a bit better than everyone and the other guys fighting it out for second. Martin was clearly the best guy in Atlanta, but Musquin looked to have an off day, also. If Musquin can get second place on his off day, the other guys may be in trouble. I think this weekend will be the real test, as they all now will want to prove that they are the guy. Musquin ran away with the first one but Martin came firing back this past week. Momentum is huge in this sport, and both will want it leaving the ATL.

Stephenson: What in the world did we just witness on Saturday night? I've re-watched the main three times and am blown away each time! I thought Martin blew it when he came into the first turn with the holeshot and went wide to go back to sixth. Musquin was just ahead of him with Davalos and Bogle one-two. Turn out the lights, I thought. Game over—those two are gone. Then by lap six it’s Davalos, Bogle, Moose, and Martin, yet they finish completely the opposite. Had to be one of the best rides of Martin's career, at least supercross-wise. I never really saw a mistake from him. On the other hand I don't think I've ever seen Musquin ride so rough and make so many mistakes. I mean that as a compliment. The usually very reserved and smooth-as-glass rider really hung it out in Atlanta. He showed some blazing speed and a lot of heart. I was impressed, and I liked seeing this side of him. Bogle has to be scratching his head a little. It never feels good to get chased down and dropped like he did. He needs to show up for Atlanta 2 and win, or J-Mart or the Moose will be snatching that #1 plate off his back. At this point I think this title could still go to any of these three.

[Denny Stephenson is auctioning off some of his old helmets to raise money for his son, who has recently been diagnosed as a diabetic. These were the good old days of custom-painted lids. Check it out.]