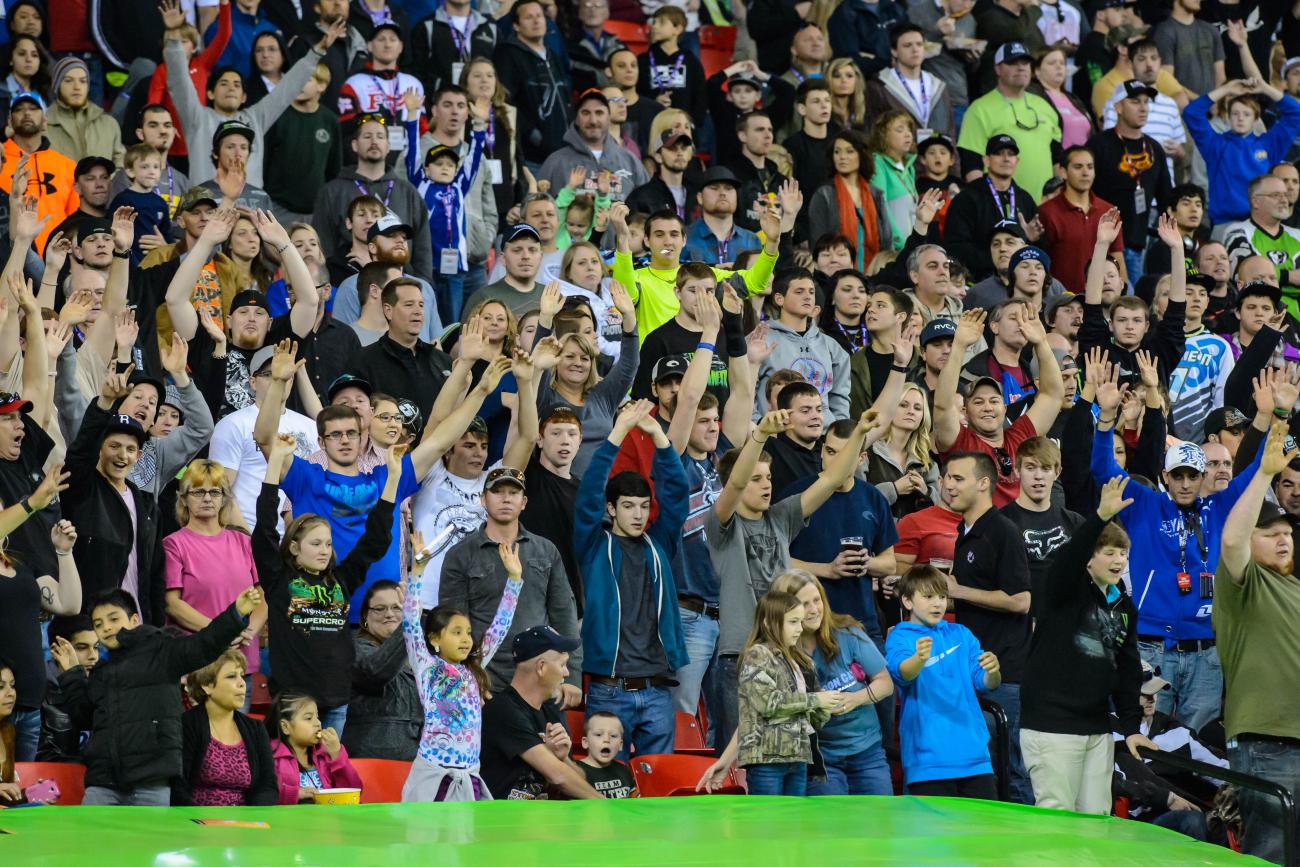 Hello, everyone, and welcome to the Rev Up. Now we’re rolling. In a long line of good ideas from Feld, I think the decision to have back-to-back rounds in the Georgia Dome is a great one. Atlanta draws from over a half-dozen states spread throughout the South—Florida, North and South Carolina, Kentucky, Tennessee, Ohio, and more. As the first round in the East Region to travel to the East Coast, this stop on the tour has produced some of the best main events in supercross history. From the 1989 and 1990 knock-down drag-outs, to the 2011 edition where Chad Reed took out James Stewart on the last lap for the win, this land historically breeds competition in a big way. Even last year’s event was a shocker when Ryan Villopoto missed a triple late in the main event allowing Ken Roczen to emerge victorious. In addition, the always-sold-out (or nearly sold-out) and always-rowdy crowd is simply fun to be a part of.

If I seem more over-the-top than normal, it’s because this is by far my favorite supercross. For about ten years I’ve had the same system: I stay at the W Hotel downtown and walk across Olympic Park to the Georgia Dome. There are all kinds of restaurants and bars as you enter the massive convention center, and as a fan it’s hard to find a hotter bench racing spot. Sometimes the weather outside is cold, but it never really matters because the vibe is so rad.

The pits are the most packed of the year as well. All of the haulers park inside and the event always brings in around 60,000 fans. For those of you who went to Anaheim 1 this year, try to imagine adding 20,000 more die-hard fans into the mix. It’s awesome.

I do have some concerns, though. I worry some folks will pick one Atlanta round or the other, and the normal attendance will be split and smaller. It just won’t be the same with only 30-40,000 fans. Part of what makes a probably barn-burner main event so epic is the cacophony from the gigantic crowd. I still think it will be close to a sell-out this Saturday night, though. The racing is just too good for it not to be.

Speaking of the racing, the old racing adage “Win on Sunday (Saturday night), sell on Monday” is ringing true with the KTM bunch. In fact, Red Bull KTM stole both holeshots and led every lap of both main events last weekend. More to that, 250SX East winner Marvin Musquin completed the “cycle” by winning both qualifying sessions and his heat race, and leading every lap of his main event. In a failing effort to be unbiased, I personally thought the new factory edition KTMs were the most magnificent race bikes ever when I first saw the pictures on the web. After seeing the bikes in action during the opening rounds of Monster Energy AMA Supercross, an FIM World Championship, you kind of have to look at the scoreboard. Look at the holeshots and career revival of Andrew Short on his BTOsports.com KTM. Check out Ryan Dungey’s best start since his 2010 championship season. In case you didn’t read it correctly, no one was in front of Musquin or faster each time he was on the track.

Yes, credit to the riders, but the way the bike works on the track is what catches my eye. Dungey is making most of his passes on the inside of the corners. He can hold a lower line than anyone else and never steps out when he hits the throttle. The same can be said for the whoops. Dungey and Musquin were flattening the super-long whoop sections, barely misplacing a tire. Who would have thought we would be associating cornering and whoop riding superiority from a Katoom? Perhaps the most glaring aspect is that the bikes are actually based around the stock 2016 models the public can buy next year at a dealership. These are high end Factory Edition machines today, but this is going to be standard KTM  SX-F fare soon. Again, I don’t mean to be biased—I actually ride a Yamaha—I’m just calling it as I see it in the SX series thus far. The factory edition KTMs are performing the best in 2015.

I’m saving the race analysis for the rest of the boys this week. I just want to remind you guys about how awesome the event itself is this weekend. The East Coast has been salivating for an opportunity to be part of the fun, and I can literally feel the vibe already! It’s really no overstatement—the Atlanta Supercross is the biggest and baddest of them all. Now we have two of them!

Things are shaping up in the 450 class and we are hitting the halfway point. Will Dungey and Roczen begin a title battle down the stretch, or will the red riders win their way back into the hunt? It’s round two of the 250SX East Region, and it will be interesting to see who can stop Marvin Musquin.

Atlanta is here. Time to get loud.