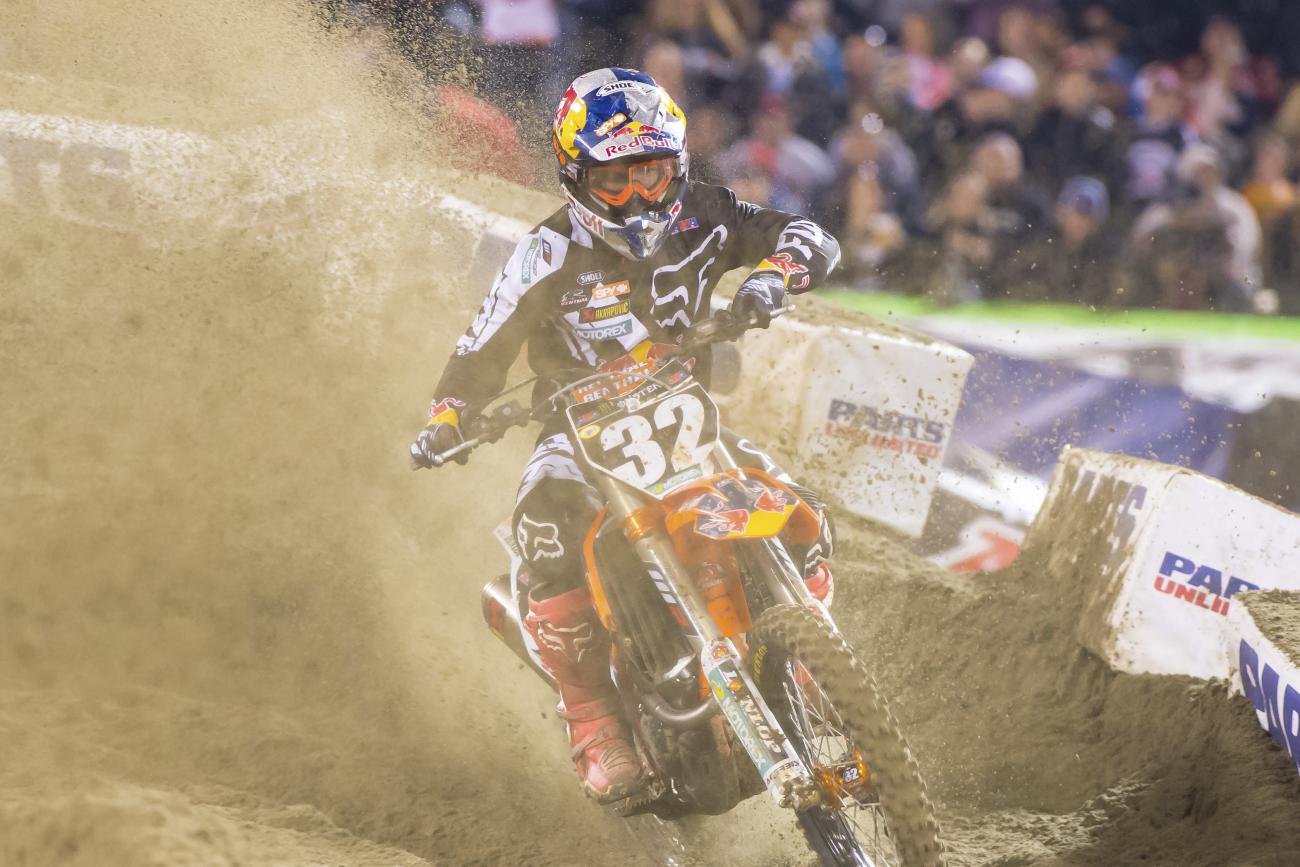 The Oakland dirt was a little harder than usual, but still rutted up and broke down. “The whoops were a perfect example,” said Team Honda’s Cole Seely to our Steve Matthes. “They just broke down to pretty much nothing, one long rut through the whole thing. Pretty much was how the whole track went. The heat races were really good, the semi was good, and then by the time the main event came around it got so torn up. This dirt is really good because it’s really tacky but by the end of the night it just gets really rutted.”

It appears Trey Canard and Chad Reed have put last week’s shenanigans behind them—at least as it applies to each other. Reed is not done with FIM official John Gallagher, clearly. “For sure what I did wasn’t right, but I don’t feel like I need to write an apology,” said Reed to our Steve Matthes. “I didn’t put anybody in harm. Love me or hate me I’m pretty damn good with these dirt bikes. I’m like surgeon in the fact that if I want to hurt somebody with it, I promise you I can hurt somebody with it. And my 'malicious attempt' as Mr. Gallagher called it, if I’m 'malicious intent,' trust me I’m not going to just bump a guy into a tough block. So last week’s done for now. Now it’s up to the lawyers. That should be fun.”

Rockstar Energy Racing Husqvarna’s Jason Anderson had a scary crash Saturday night in Oakland (which you can check out below) but was able to rebound for a top-ten finish—his fourth to begin his 450SX career. Anderson has been fast at every race, but the typical rookie mistakes have prevented him from getting his best result each night so far. “When it came down to it I was up there, but I ended up crashing pretty hard and finished tenth,” said Anderson in a press release.

El hombre down.. Man I ate shit.. Happy to be walking away from that one!

Martin Davalos, who hopes to fight for the 250SX crown in the East Region later this year, made his first career 450SX main in Oakland. The goal for Davalos, who’s coming off a leg/foot injury that cost him all of Lucas Oil Pro Motocross last year, was just to get some race time in before the East Region opener in Dallas. “I got better on the bike throughout the day, but I felt like I rode too conservative,” he said in a team statement. “I should have pushed a little more, but it was a great experience. I feel like I loosened up a bit more and I’m looking forward to getting more seat time on the 450 next week at Anaheim 3." Davalos finished twentieth after being docked two spots for jumping on a red flag. Right now the plan is for Davalos to race this weekend in 450SX, and then turn his focus to the 250 class.

One triple jump cost both RCH/Soaring Eagle/Jimmy John’s Suzuki riders the chance for a good finish. Everyone saw Ken Roczen case it while passing Chad Reed, and then blow his right wrist off the bars while also and smacking his face on the bar pad. According to the team, Roczen is fine after the crash. “I got off to a great start in the main. Battled with [Chad] Reed and Shorty [Andrew Short] … Made the pass on Reed. And I just totally brain farted,” Roczen said in a team statement. “I’m so mad at myself. I tried to triple and came up short. I hit my face and my goggles on my handlebar so I had to stop and just check myself for a minute. Luckily, I got back up and kept going. Those are important points.” Roczen regrouped to finish fifteenth in the main.

Incredibly, Roczen’s teammate Broc Tickle had already cased that same triple in the main event, sustaining a back injury that forced him to retire. He was released from Sutter Eden Medical Center and allowed to travel home with the team, but is expected to miss this weekend. “I’m super-bummed on the way the night ended up,” said Tickle in a team statement. “Unfortunately, I crashed on the start in the main and was in the back of the pack. I got back going but I came up short on that triple and jammed my back. I was hoping to tough it out and salvage as many points as I could but my body was telling me something different.”

RCH team manager Kyle Bentley added: “We had a rough night. Things aren’t always going to be perfect. Broc came up short on the same triple Kenny did. That’s racing. We’re just glad they’re both healthy. We’ll move on and regroup and be ready for Anaheim next weekend.”

If you were looking at the results sheets from Oakland you may have noticed that Vince Friese, Blake Baggett, and Martin Davalos were all assessed two-spot penalties. If you're wondering why, wonder no more—all three of them jumped on the red when Ken Roczen crashed on the triple.

GEICO Honda’s Eli Tomac’s fourth was his worst result since an opening round twentieth, but he made up valuable points in the championship due to Roczen’s crash. "You never want to wish bad upon anyone but that's a plus for the points, obviously," said Tomac in a team statement. "It's a long season." Tomac, who entered the night 26 points behind Roczen, is now 18 points behind new leader Ryan Dungey.

Despite being docked two spots for jumping on the red flag after Roczen’s crash, Yoshimura Suzuki’s Blake Baggett had his best finish on a young 450SX career. “I just started chugging away and working my way towards the front,” he said in a team statement. “This was a super-fast track, so it was really hard to make up time on people, but I had my spots on the track and certain places that I was able to make passes, so I was able to work my way up.” He continued: “It was my best finish so far and I’ll just keep building from here. I had a really good semi where I got the holeshot, so I’m figuring things out and I expect to be in the fight soon.” After the first two races, Yoshimura Suzuki team manager Mike Webb gave seven-time AMA National Champion Ricky Johnson a call and asked him to start working with Baggett. Baggett has been in the top ten at these last two races.

While the first half of the 450SX main event offered up all sorts of crashes and passes, the second half was just as intense. At one point, Ryan Dungey was all over Chad Reed for second, but then Reed put his head down and got away, even closing slightly on Trey Canard, before a big mistake let Dungey get past. Check out the last ten laps between all three, and you'll see they were clearly pushing hard and exchanging fast laps.

Monster Energy Kawasaki's Davi Millsaps felt better in Oakland, starting sixth and finishing seventh, a week after sliding down the results page. “I felt much better tonight,” said Millsaps in a team statement. “I was able to maintain my pace through the main event, but if you’re not at the front from the beginning it’s hard to find that extra second each lap while in traffic. I’m happy with our result and we’re only going to continue to get better.”

With Mike Alessi sidelined with a knee injury, Vince Friese made his 2015 450SX debut for Smartop/MotoConcepts. Friese, like Baggett, was docked two spots for jumping in the red flag. He finished sixteenth overall.

Red Bull KTM’s Justin Hill was pacing the field in Oakland and seemed poised for his first win of 2015 before crashing in the sand section on lap seven. “I’m really bummed about tonight’s result,” stated Hill in a team statement. “I felt good on the bike all day and was fast in practice. I simply mistimed my entry into the sand section. I had been doubling into that section most of the day, but they changed the entry a bit during track maintenance so my normal line didn’t work during the race. I’m pretty sure I face planted the sand. I just struggled to find my rhythm after that and went off the track again a little later. I’m going to do my best to bounce back at Anaheim III next weekend.” Hill finished ninth overall, and now sits 21 points behind 250SX West leader Cooper Webb.

Rockstar Energy Racing Husqvarna’s Zach Bell used a great start Saturday to claim his first career top-five 250SX finish. “Last weekend I hurt my foot so I took last week off so I could get it good for this weekend and show everyone what I could do. I got a holeshot and put it in the top five so I’m happy,” he said in a team statement. “I just need to build off of this and get better every weekend.”

Zach Osborne, dealing with a thumb injury, still isn’t able to get a ton of time on the bike during the week. “The track was pretty challenging," said Osborne in a team statement. "And I haven’t been spending as much time as I’d like on my bike due to my previous thumb injury. I think the technical track was definitely the biggest obstacle for me this week, but I’ll be back up there next week.”

For the first time in 2015, Lucas Oil/Troy Lee Designs KTM’s Jessy Nelson is outside the top two in points after a tenth-place finish. “In the main, I got a really bad start—missed a shift—got a little off axis coming out of the gate,” he said in a team statement. “I ended up coming together with another rider on the first lap and went to last. From there I just tried to salvage some points. The race went by pretty fast and wasn’t able to get back to where I wanted to be.” Nelson is now 15 points behind Cooper Webb in 250SX.

Nelson’s teammate Shane McElrath also struggled getting to the front, finishing eleventh on the night—the first time he’s been outside the top ten this year. “I led the heat race for a little bit and felt comfortable out there,” said McElrath in a team statement. “There was some chaos during the first couple laps, which really didn’t help me settle in and find a good pace. Just one of those things where we’ll move past this and look to do well next weekend.”