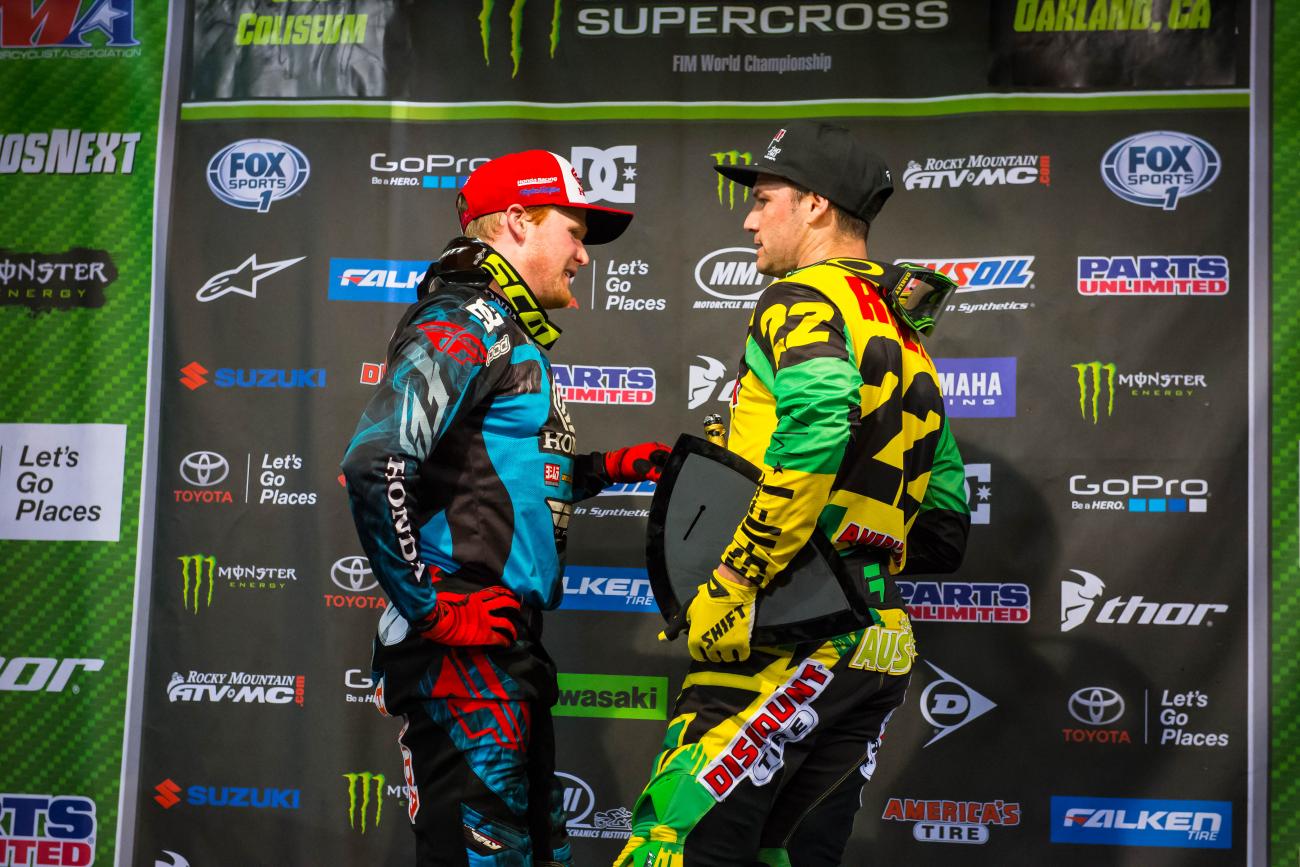 “We need to work on some things.” - Every rider after a loss.

Those vague “things” could be anything from bike settings to riding technique tune-ups to training changes. But we all know when a rider doesn’t do well it’s easy to look at the bike and hard to look in the mirror. Bike troubles can straddle that fine line between injuries and excuses, to the point where we’ve become pretty numb to it all. Another guy said he needed to make bike changes? Can’t he just admit someone else is a better rider?

Well, sometimes such bike talk is warranted, and results can help build the bridge between what sounds like an excuse and actually is a reason. In this case, we saw it at Oakland, as Trey Canard and Chad Reed rode at the front, sudden improvements made possible by changes to their equipment.

We’ve already visited the Canard scenario, and he’s tried not to talk about it too much. Last year he was fast, but just a tick off of the fastest 450 men through most of the year. On occasion, he’d give us just a hint. He nearly won at High Point then struggled the next weekend at Muddy Creek.

Well, his bike reason was indeed a reason, not an excuse. When the series went on break, Trey and Team Honda tried something new and showed up at Unadilla sporting KYB suspension instead of Showa units. He and the team didn’t talk much about it, but the results of the change were obvious—Trey now had the bike where he wanted it, and he was fastest in qualifying and won the second moto. Since then, he’s been as fast as anyone, ending the Lucas Oil Pro Motocross Championship in a flurry and carrying that speed to the Monster Energy Cup and into Monster Energy AMA Supercross, an FIM World Championship. His latest win was really just a matter of when, not if. Whatever Canard said he needed from his motorcycle last year was legit—and when he got it, he delivered.

Chad Reed is the absolute master of the bike change, now famously even swapping bike brands to get the feel he likes. To keep track, he walked away from a guaranteed deal at Monster Energy Kawasaki for 2011 because he didn’t like the bike. At that point he wanted a Honda, and proved his switch was valid by winning on red for the next two years. But as both brands made bike changes, he found himself wanting to leave the Hondas and replace them with Kawasakis. It seemed like a curious move, but Chad again proved his decision right with two early wins a year ago.

So even though Chad struggled at the first two races of 2015, you were inclined to give him the benefit of the doubt. “Obviously the last couple of weeks have been rough,” he said after Anaheim 2. “I’ve been searching; for some reason things that I’m feeling at home I’m not feeling here, or I should say things I’m feeling here I’m not feeling at home. I feel like I’m running the guys in circles a little bit, and I’m not too excited or pumped about that.”

A reason or an excuse? Must have been a reason, because Chad made huge changes before Oakland and rode much better. “Watching film from Phoenix, we watched some slow-mo stuff and it kind of led us in an area to look at,” he told our Steve Matthes after the race. “Unfortunately we actually had some wrong parts in the forks that we had to modify and make right. Going into last weekend I was a little bit better off.

“So we completely changed my bike this week and it was better than ever. The tracks are developing differently. They’re putting a lot of water down in practice. I don’t want to give away what I think, just because I feel like why I’ve been relevant for so long is being able to see and diagnose where and why people are good. I feel like we made big adjustments to our bike this week to be competitive, and I think that it showed all weekend. Looking forward to Anaheim [III].”

While Trey and his team usually keep things quiet—Team Honda doesn’t ever give away too much—Reed, owner of his own team, is as vocal as anyone. Either way, their words hold weight, enough to tip the balance from an excuse, to a reason.