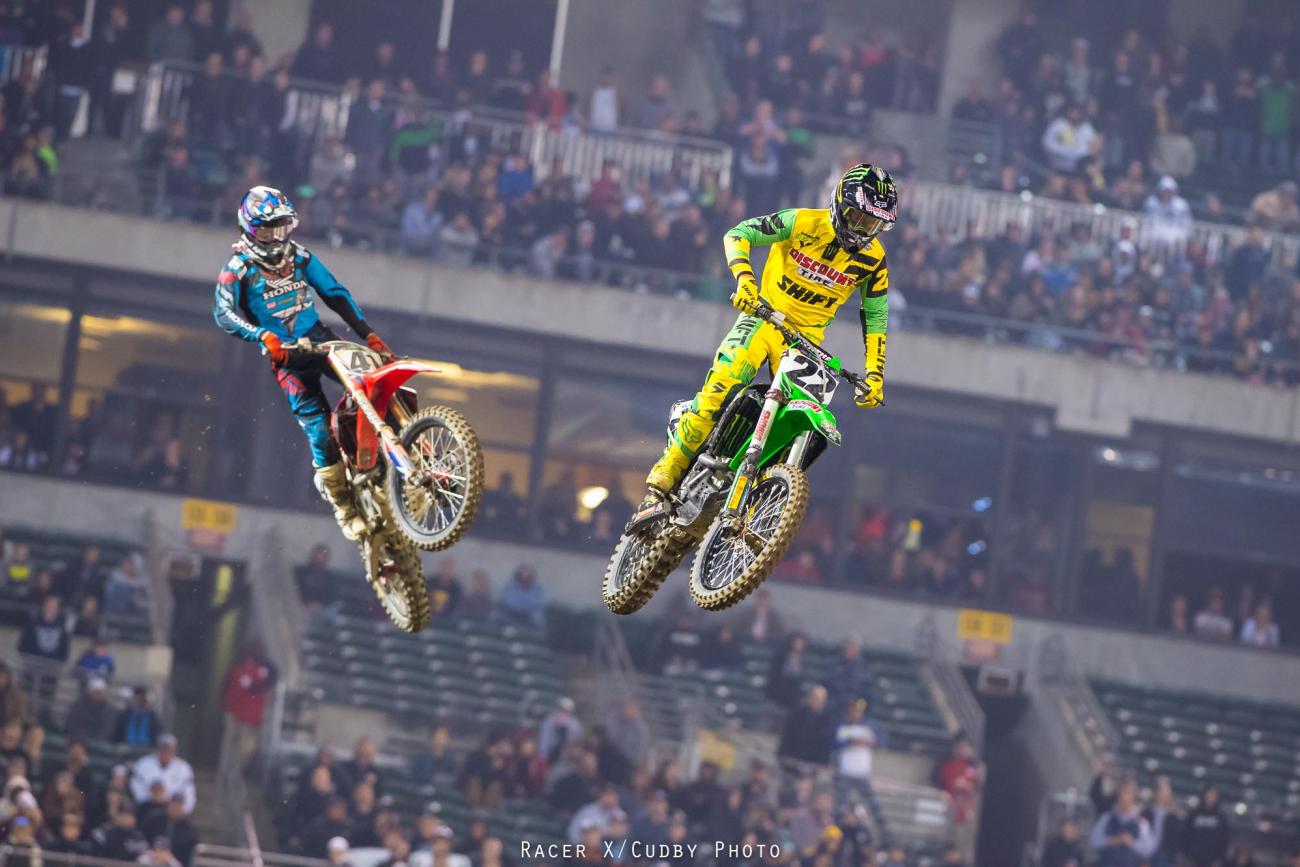 Well round four of the 2015 Monster Energy AMA Supercross, an FIM World Championship, had everything you could want in a race. We saw a new points leader and a new winner in the 450SX class and a coming off some high drama in that class last week, the 250SX guys that gave us all we could handle this time.

When the 250SX main event took off it was Rockstar Husqvarna’s Zach Bell with the holeshot but he was quickly passed by Pro Circuit Monster Kawasaki’s Chris Alldredge and the rookie led his first ever laps before crashing out. After Alldredge is was GEICO Honda’s Malcolm Stewart but he was quickly passed by Red Bull KTM’s Justin Hill. Hill looked to have the race under control until he went down in the sand section all by himself.

Meanwhile early on in the main event, Pro Circuit’s Tyler Bowers came into a berm pretty hot while points leader and Star Yamaha rider Cooper Webb decided to alter his course around the berm while trying to pass Bell. Whether it was a take out or a racing incident is up for debate, but what’s not is Webb went down hard while Bowers saved it and rode off. After last week’s last lap pass by Webb on Bowers, this one looked at a little controversial, to say the least. After the race Webb had some words about Bowers—the stage is set with some bad blood being mixed up between these two.

After Hill’s crash it was Stewart in the lead with Cycle Trader Rock River Yamaha’s Alex Martin riding his best supercross race ever in second. But Webb was coming. No doubt riding very angry, Webb came from about tenth after the fall with Bowers, passed Bowers, passed Martin, heck he passed about everyone and right into second place.

He ran out of time to get Stewart, though, and Malcolm hung on for his first career win ahead of a charging Webb and a very-happy Martin, who score his first podium. Bowers was fourth and Bell was fifth. This 250SX series is just starting to get good!

In 450’s, Soaring Eagle/Jimmy John’s RCH Suzuki’s Kenny Roczen had won two out of the first three races pretty easily and in the other race, he scored a second. The German rider looked poised to do that again in Oakland when he dove inside of Discount Tire’s Chad Reed on lap two and took second place. Early leader and holeshot winner BTOSports KTM’s Andrew Short was leading and although he was riding great, the 94 looked to be on track to win when he made that move on Reed.

But disaster struck when Roczen decided to go for the triple after the pass and came up way short. The impact shocked Roczen off the bike and onto the ground holding his wrist. It looked like his season was over. Incredibly Roczen got up almost a lap down and managed to salvage a sixteenth. Afterwards the word was he would be ok but for sure some MRI’s will be done on the wrist—on Instagram, Kenny said he was fine except for a beat up face. He hit the bars hard on the landing.

Out front Short was having a hard time maintaining the pace and would drop back to eighth. His holeshot and early sprint in the main event probably contributed to his rapid shifting the back. The pace is gnarly up there.

Out front it was the veteran Reed, who one week ago received the black flag for his retaliation move on Honda’s Trey Canard. We don’t have to remind you about that do we? Off the pace all year long, Reed’s Oakland was already shaping up to be his best race of the year. The suspense got into high gear when Canard ripped through the pack and got into second, so amazingly the two guys who battled in the headlines last week were battling for the race win this time. Somewhere out there a TV scriptwriter was impressed with the irony and drama in this battle.

But there really wasn’t a battle, Canard was flying on this night and dove to the inside of Reed before a triple and that was it. Trey had some great lines, and that slick move was all Trey needed as he took off the for his first win of the year and first supercross win since 2011. Afterwards Canard and Reed exchanged some reportedly apologetic words to each other on the podium about last week’s incident.

Late in the race Reed cross rutted a triple and shot off the track. This allowed Red Bull KTM’s Ryan Dungey to get by and grab the runner-up position. Reed’s third was by far his best result of the year and shows that he’s perhaps back on track.

Dungey was a winner, too. With Roczen’s troubles, the Dunge grabs the red plate signifying he’s the points leader. Ryan doesn’t have a win yet but he’s been on the podium or 4th place at all four races this year. Roczen’s four back and with his win, Canard moves into third, ten points back of #5.