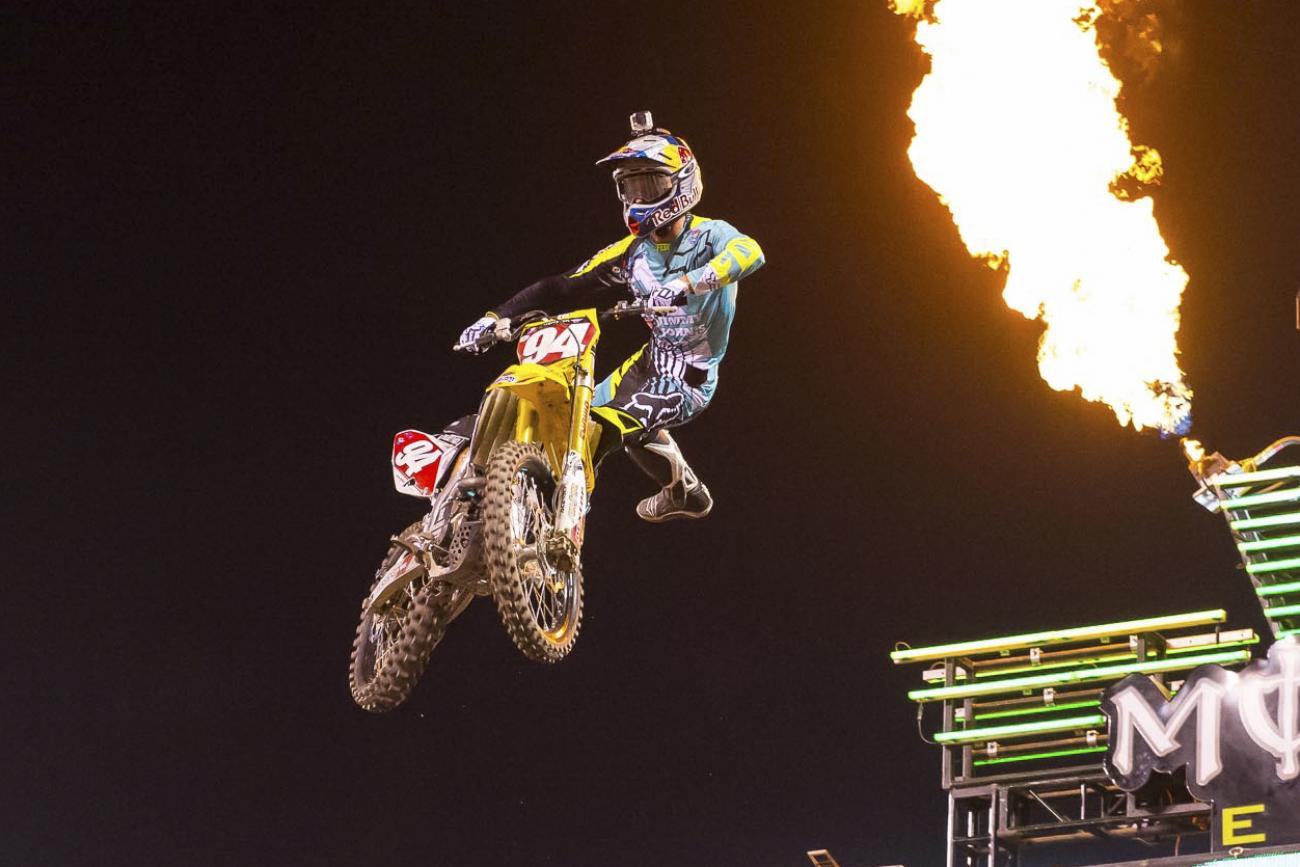 The least exciting story of tonight’s Monster Energy Supercross 450 main event? The story of the winner. While hell was breaking loose a few positions back, and other riders were finally finding the speed they wanted to have two weeks ago, Ken Roczen was calmly out front en route to his second win of the season. We can say this about Kenny: others may be able to match his speed, but he’s been smooth and nearly mistake free so far, and he saves his good starts for the main events. He’s nailed three good starts in three mains, while gating badly in his three heat races. Tonight in Anaheim, Andrew Short grabbed the holeshot (Short has been incredible with his starts so far this year) and Kenny quickly got by him to take the lead. The Soaring Eagle/Jimmy John’s RCH Suzuki man would lead every lap, just like he did at Anaheim 1.

Red Bull KTM’s Ryan Dungey looked quicker tonight than he did at the first two races, though. He started about fourth and made two quick passes to get to second (those quick passes don’t always come from Dungey, so that was impressive). He even ran down Kenny for a bit, bringing the lead from 4 seconds to 3, but then a bobble allowed Kenny to stretch it back out. “I was pushing my tires to the limit, giving it everything I had out there,” said Dungey. With a holeshot, he could easily win a race.

Third was GEICO Honda’s Eli Tomac, who was good but not as spectacular as he was, speed wise, the last two weeks. And speaking of starts, he had horrible ones in his heat and semi, and the main wasn’t great either. “I hate to say [the difference between last week and this week] is starts because that’s what everyone says, but that’s the case,” said Tomac. He got into third but wasn’t able to keep pace with Dungey or Roczen this time.

Okay, now the crazy stuff. While Roczen was getting away, BTOSports.com KTM’s Short crashed and collected Rockstar Energy Husqvarna’s Jason Anderson with him. Soon a torrid fight for second broke out between Dungey, Davi Millsaps, Chad Reed, Tomac, Trey Canard, Cole Seely, Justin Barcia and Broc Tickle. They were close! Canard got behind Reed and then tried an inside line in a corner, but Reed dove inside as well, and Canard landed on him. They both went flying. Reed was not happy, and as they go up and rode down the start straight, Reed went inside and elbowed Canard. Canard went flying off the track and into a tuff block, flipping over the bars. FIM official John Gallagher then called for a black flag for Reed, and Reed was required to pull off the track and take a disqualification. We’ve seen black flags only rarely, and just about never for incidents on the lead lap in the main event—we’ll have Reed, Canard and Gallagher’s side(s) of the story here shortly.

What we can tell you is that both Canard and Reed looked better here than they did last week in Phoenix. Canard, on his factory Honda, was victim of a different rough-riding incident in his heat race, as Justin Barcia slid inside him and took them down. This sent them both to the Semi, and gave them bad gate picks in the main event. Canard found a gate four from the inside, which was a decent spot, but the rut out of the gate hooked him and sent him sideways, and into the pack. With a better start in the main, he might have been in contention for the win.

As for Discount Tire/TwoTwo Kawaski’s Reed, he wasn’t “Winning Anaheim 2 like 2014” good, but he was better than the opening rounds. Reed says he’s feeling things at the races that he’s not feeling at home, and he’s been frustrating his team as they search for a solution. But he did feel better on this night, and thought he would have been a top five guy if not for the incident and black flag.

With Canard and Reed down, and Monster Energy Kawasaki’s Millsaps making a sudden fade backwards in the pack, Justin Barcia took over fourth. The night was a breakthrough of sorts for Barcia, as the AutoTrader/Toyota JGR Yamaha rider was fastest in practice—a big difference from last week, for example, where he was 12th fastest. He was right in the thick of the battle most of the night and the fourth is a sign of good progress. The bad news is his teammate Weston Peick is now done for the next few weeks after breaking his foot in last week’s main event. Peick tried to ride practice today and rebroke the foot—he’s heading to the team HQ in Charlotte, NC, to have doctors evaluate the injury.

Solid, solid performance for RCH Suzuki’s Broc Tickle, who was in thick of the podium fight most of the way. He finished fifth, which is just his third career top five in 450SX. Tickle, coming back from a broken back, is faster this year than he was last year.

The Canard/Reed smashup wasn’t the only mashing at Angel Stadium. The 250SX class presented an awesome race. Lucas Oil/Troy Lee Designs KTM’s Jessy Nelson got away early and looked set for his second-straight Anaheim win, until he clipped the landing of the over-under bridge and threw it away. This gave Monster Energy/ Pro Circuit Kawasaki’s Tyler Bowers a sizable lead, but Yamalube/Star Racing Yamaha’s Cooper Webb was absolutely flying from the back. Webb’s start was so bad he might have literally been last out of the gate, then he was 11th on lap one, but kept digging. On the last lap, he finally caught Bowers and pulled a daring block pass that worked. Bowers tried to rail the outside in hopes Webb, on the inside, wouldn’t be able to jump the triple, but he ran out of room, tagged tough blocks, and tipped over. It was a superb charge from Webb, and Bowers tipped his cap to him at the end, not at all upset over the last-lap block pass. Bowers hung on for 2nd—he’s been consistent. Webb, though, is getting to an otherworldly level—these dudes better figure out a way to stop him soon because he’s starting to build something big here.

Justin Hill was third on his Red Bull KTM, better than the first two races, but the title favorite just hasn’t been as fast as expected. Bowers was able to pass him and wheel away, and then he and Webb had a good scrap for 2nd, which Webb eventually won. Hill and the field need to find another gear because Webb is going crazy fast at the moment.

Zach Osborne, riding with a broken thumb, looked much better this week than previous. The Rockstar Energy Husqvarna rider nailed his starts, too, and finished a solid fourth in the main. GEICO Honda’s Malcolm Stewart had a quiet fifth, and Nelson recovered for fifth. Webb is into the points lead now, though.