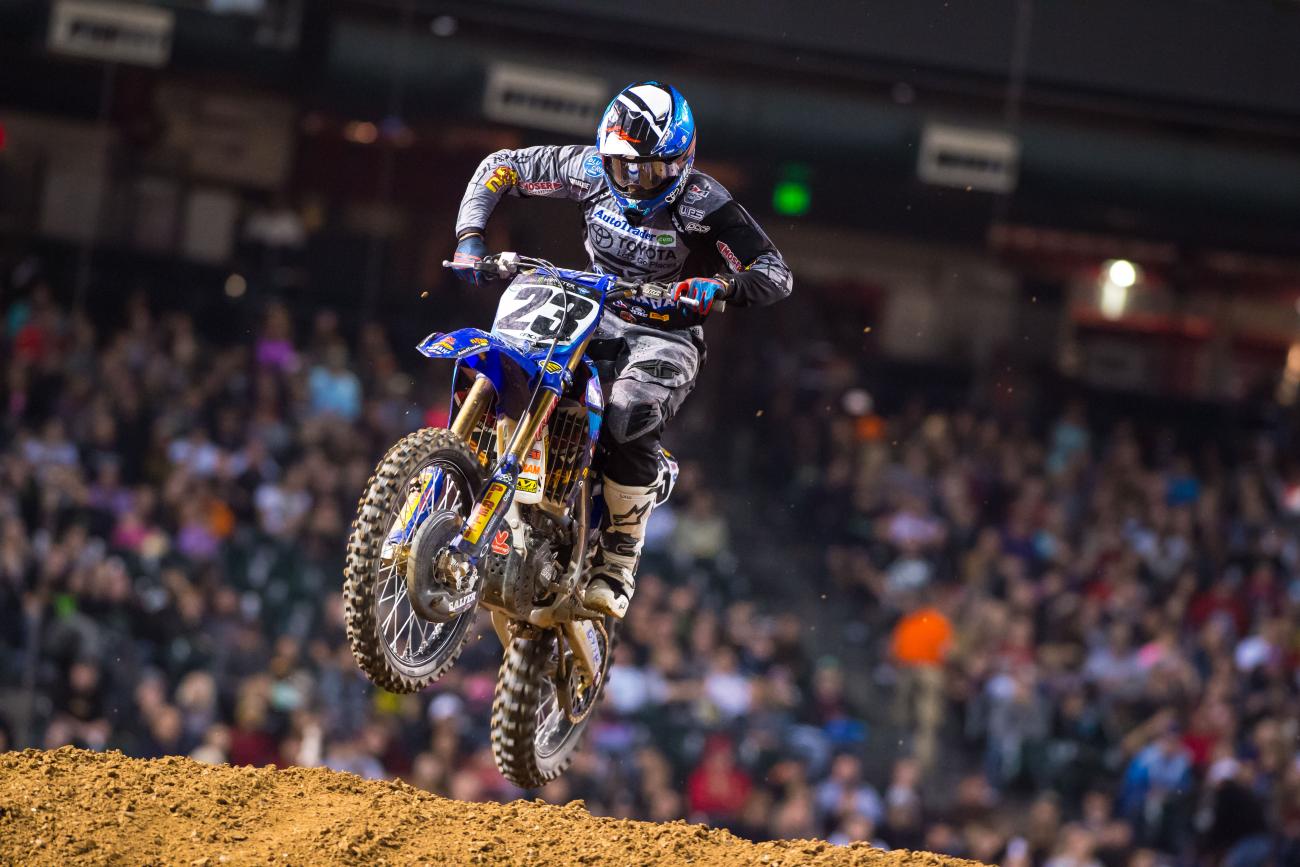 Jason Weigandt: Our boss Davey Coombs always likes to joke, “When is an injury ever timely?” but Weston Peick’s foot problem is extremely untimely. He was literally putting in the best race of his life on Saturday night in Phoenix until he cased a jump and broke a bone in his foot. Ryan Dungey was attacking him hard for a podium spot, and Weston had to give up the fight and settle for fourth—his first career podium at any level slipping from his grasp.

Hey, sometimes when a rider is sucking, an injury and a layoff come at just the right time. That’s the opposite here.

So Weston will try to keep racing. Doctors told him he’ll have less pain if he gets the bone screwed back together, and it’s a relatively small break and minor surgery, so he didn’t even get the “You’d be insane to try to ride with this” order. With some therapy to reduce swelling, the only thing left is trying to deal with the pain. We doubt many out there are tougher. Weston’s already generating huge buzz for his tough guy performances, but this could take the legend to another level.

I hear the plan is to hop on the bike to do some practice starts on Friday, but the first real test over obstacles comes on Saturday in practice. I understand the desire to grit it out when you’re on the verge of something big. Weston has made the unprecedented climb from “guy who could make the main” to “guy who could podium.” But I don’t know how much risk one weekend is worth. Yes he’s fifth in points after two rounds, so the desire to scratch for every point is commendable, but maybe not needed. What would suck more is if this injury takes the starch out of him for the next few months. Maybe it’s better to just take one weekend off in order to get that thing pain-free a little more quickly? I’m not a doctor, but I’d think an extra week would have to help. And unlike Weston’s privateer days, he doesn’t have to worry about losing money by not racing. He’s on a team and collecting a salary, so his bike will be in Oakland, too. Heck, I know how these teams work. Just based on this one awesome Phoenix ride, Weston has punched his ticket for a 2016 ride. “Podium speed” equals job security.

(By the way, yes, Phil “In” Nicoletti is on the West Coast waiting in the wings if Weston realizes on Friday there’s absolutely no chance he can try on Saturday. I wouldn’t count on Weston saying that.)

The greatest scenario is for Weston to try it on Saturday and realize it’s not that bad. If it is bad, I just hope he doesn’t push it too far—the man is determined, but sometimes discretion is the better part of valor.

Chase Stallo: Weston is the only one that truly knows how much pain his body can tolerate—my guess would be a lot. And, like Weege said, he won’t know until practice Saturday. I’m not going to say whether Peick should or should not race on Saturday; I’m not qualified to (insert cheesy Holiday Inn joke). My only concern, and we see this a lot in football, hockey, etc, is that sometimes an athlete doesn’t know what’s best for himself or his body. They want to be tough. They want to play through the pain, even though it may cause more damage in the long run. I don’t know if that’s the case with Weston’s injury. I’m hoping it’s not and he can show up and ride without any ill effect. He’s come a long way, and I’m sure he wants to ride this wave of momentum. I just hope he listens to his body and realizes that one week away won’t damage his career—but if this keeps lingering, the damage could be real.