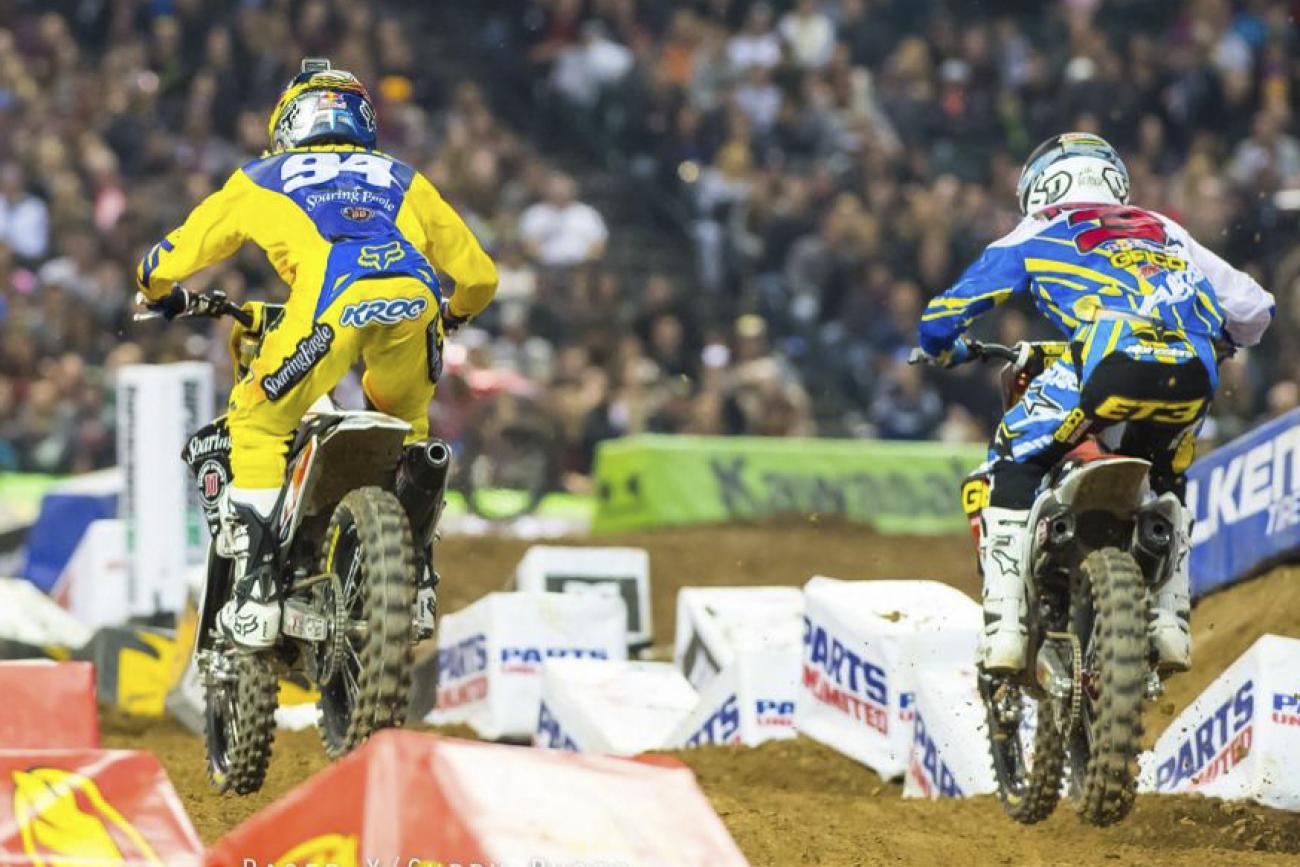 Last week at Anaheim, we wondered if first-round jitters and bike problems messed with the results. After Phoenix, we can talk about the track and the starts. Eli Tomac and Ken Roczen started up front and really crushed it in the 450 class, and they appear on the verge of becoming the “big two.” Perhaps. But maybe it’s still early. Maybe everyone else just got bad starts. Maybe these tracks haven’t been good for passing. Or maybe these kids are just #whosnext?

GEICO Honda’s Tomac was the better man on this night at Chase Field. He grabbed the holeshot, Roczen elbowed him out of the way to take the lead, but Eli regrouped and caught back up. They put down another in the already well-stocked line of good battles between them, and Tomac wrestled the lead away for good on the eighth lap. "The way it happened, too, was one of the best ways," Tomac said. "Kenny and I went back and forth multiple times. Honestly, it was just super fun. I don't know how many laps it lasted, but somewhere around the middle of the race I ended up getting in front." This is the first 450SX win of Tomac’s career, but it seemed understated. We’ve known his breakthrough ride was coming for awhile so it almost seemed normal, even though it had never happened before.

Kenny then dropped off the pace to bring it home in second. The Soaring Eagle/Jimmy John’s/RCH Suzuki rider admitted he got beat straight up, and just didn’t feel as good as he did last weekend. You can argue that Tomac and Roczen were the fastest last weekend and again here in Phoenix, so there’s a trend beginning to develop. Everyone knew Eli and Kenny would be good this year and the fact that they now both have wins isn’t a shocker. We’ll have plenty more races to determine which one of them is better (and Tomac, by the way, has a huge points hole to dig out of after last week). The bigger and more immediate question is if anyone else can run with them.

Red Bull KTM’s Ryan Dungey spent half of the race in fourth behind Autotrader/Toyota/JGR Yamaha’s Weston Peick, who rode very well and looked ready to grab his first career podium. Dungey, as always, came on strong late and started pressuring Peick, and then Peick made a mistake and cased a jump, tweaking his foot. Dungey got by to take third, one position better than last week. Dungey said he felt good about his overall speed but wishes he was quicker at the beginning of the race, when Tomac and Roczen were getting away. He feels like if he had done that, he might have had something for Roczen. He feels like he’s 80 percent of the way there with his bike setup, but has some fine tuning to do on his all-new ride.

Peick held on for a career-best fourth. Monster Energy Kawaskai’s Davi Millsaps was fifth most of the way, at one point a long way back from the battle for the podium. As Peick slowed in the final laps though, Millsaps tracked him down and nearly got him for fourth.

Jason Anderson was last week’s sensation after his second-place finish, and while the Rockstar Husqvarna rider only finished sixth this time, he still rode very well. After a terrible start (14th after lap one), he rolled forward and made steady, solid progress, while others faded. Starts and fatigue were a huge factor on the very tight race track, and even race-winner Tomac admitted he got tired. Anderson has been not only strong, but smooth and efficient in his early 450 rides.

Andrew Short was great again in 7th, but he says he didn’t feel on like he did last week. He ripped another good start, and that made all the difference. His BTOSports.com KTM teammate Justin Brayton started well, too, but went all the way back to 16th. Not a good start to the season for Brayton. Dean Wilson, on the Red Bull KTM, was also inside the top ten early and went backwards big time, finishing 17th.

The following big names get incomplete grades for the night because they gated poorly: Trey Canard and Justin Barcia. Barcia completed the first lap in absolute last place—22nd. He passed half the field and got 11th. Canard was 17th on the first lap and finished 8th. The track was not easy to pass on. It was much tougher, tighter and more technical than last week, but a lot of the ruts and grooves funneled together to make passing difficult.

Team Honda’s Canard was quiet compared to his podium ride last week, not getting to the top of the qualifying charts as often and gating badly in his heat and the main. So, in sum, what we’re seeing through the early rounds is a potential Tomac/Roczen breakaway, but it’s still to early to count anyone out until we see some different scenarious off the start.

Chad Reed showed some signs of life with key passes in his heat race and solid laps in the main at times, but overall it was another mediocore night for the Discount Tire/TwoTwo Motorsports rider. He started 11th and finished 10th. Big props to Team Tedder's Jake Weimer who rode very well to get Reed for 9th.

The 250SX West class is still wide open, with another first-time winner in Yamalube/ Star Yamaha’s Cooper Webb. Webb was fast last weekend in Anaheim but had some crashes; this time he brought the speed without the errors and turned it into a victory. “I’ve got the kung fu grip on this trophy,” he said. “Not going to put it down for a long time.”

Webb had to get around GEICO Honda’s Malcolm Stewart to get the win. Mookie crashed early in his heat race and had to go to the LCQ just to make the main, but he pulled an awesome start to lead the main and even pulled away a bit. Webb eventually settled in, caught up, and then squared him in a corner to take the lead. Stewart held on for second, a career best. Last week’s winner, Lucas Oil/Troy Lee Designs KTM’s Jessy Nelson, ran third most of the way. He closed up to Stewart at one point but then said he had a stomach issue and had trouble breathing, so he slowed up and was nearly caught by a group battling behind him. Third for the night keeps him in the points lead.

The battle behind Nelson came from rookie Aaron Plessinger, a sensation so far in his pro career. After another bad start, he rolled forward to fourth and got to Nelson, but then a few late mistakes opened the door for Monster Energy/Pro Circuit Kawasaki’s Tyler Bowers. Bowers took a solid fourth, Plessinger fifth.

The rest of the 250 top ten featured Red Bull KTM’s Justin Hill, who was suffering from a severe cold and admitted he was down on strength for the main event. Rockstar Husqvarna’s Zach Osborne gutted out the pain of a broken thumb for 7th. Shane McElrath, Zach Bell and Tommy Hahn rounded out the top 10.