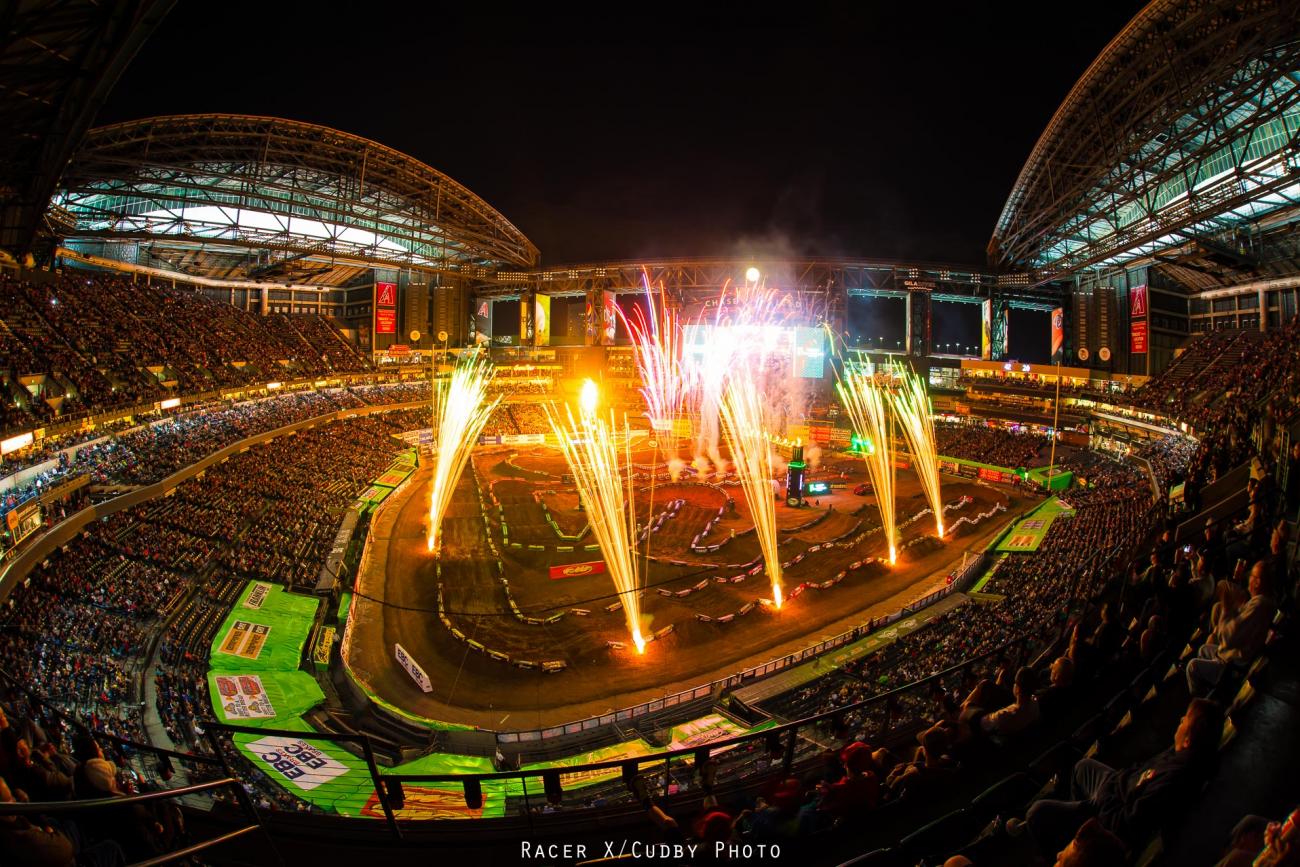 Following Anaheim there were plenty of storylines already taking shape in Monster Energy Supercross. Could Ken Roczen and Jessy Nelson replicate their dominating wins in Phoenix? Would Eli Tomac and Davi Millsaps bounce back after disastrous results? Could Jason Anderson put Husqvarna back on the podium? To find out, check out the Race Feed below.

If you were hoping that Ken Roczen would get a bad start in the hopes that it would make for some better racing, you didn’t get your wish. Don’t worry though, the racing was still great despite Roczen starting in second and immediately passing Eli Tomac for the lead. But Tomac fought back, stalking Roczen for a number of laps before putting in a real effort to make the pass happen. It was a tough track to pass on though and Tomac couldn’t make anything stick for quite a while. Every time he’d get by, Roczen would come right back on him and retake the spot. After a few laps of some seriously exciting side-by-side racing Tomac was finally able to put Roczen away for good, and he steadily gapped Roczen from there, winning by just over six seconds.

Elsewhere there just wasn’t much going on—the riders were pretty spread out and it was an extremely difficult track to pass on. About the only other good battle up front took place between Weston Peick and Ryan Dungey for third. Big credit to Peick for holding the final podium spot for almost the entire race, and when Dungey finally did catch him it took a lot of laps for Dungey to finally make the pass. Unfortunately Peick then made a mistake in a rhythm section and never got the chance to fight back. Justin Barcia had a decent night, although it doesn’t look that way on paper. He started in dead, dead last but was able to battle back up to eleventh.

This race started off with a bang, literally, when Shane McElrath, Matt Bisceglia, Josh Hansen, and a few others tangled with a Tuff Block off the start. There wasn’t a massive pileup or anything, but it completely ruined their starts. After that there wasn’t much happening. Malcolm Stewart surrendered the lead to Cooper Webb a few laps in and Webb wasn’t seen again by anyone except lappers until the checkered flag waved. He absolutely dominated this race.

Behind him the pack was pretty spread out and there wasn’t much battling happening. Things tightened up a bit at the end of the race when Jessy Nelson started catching Stewart for second, only to have Stewart stretch it back out. Then Nelson came under fire from rookie Aaron Plessinger, who was putting in a great ride. Nelson held on though, and it was Plessinger who actually dropped a spot on the last lap to a hard-charging Tyler bowers. Justin Hill suffered from a poor start and could only make his way up to sixth. If you're wondering how Darryn Durham did, he sat the day out after bending a screw in his wrist when he crashed last week in Anaheim.

AJ Catanzaro took the lead right away in this one and didn’t look back. Brett Metcalfe rode mostly by himself in second, but behind him spots three through six were pretty close to each other. It looked like there would be some hard block passes taking place between Jimmy Albertson, Kyle Partridge, Nick Wey and Kyle Chisholm for the final spot but somehow they all kept it pretty clean. Catanzaro, Metcalfe, Albertson and Partridge advanced to the main.

Great battle for the lead in this one between Dean Wilson and Weston Peick. Wilson initially held the lead, but after some back and forth Peick took the lead for good and took off. Wilson, Blake Baggett, and Mike Alessi quietly rode behind him to qualify, with Broc Tickle passing Josh Hill at the last second to take the final transfer spot of the race.

So far tonight there seems to be a trend of riders getting the holeshot and checking out, and it happened again in this race. Ken Roczen checked out and destroyed everyone. Behind him it was Anderson, Short and Grant, followed by a great battle for the final qualifying spot between Jimmy Albertson and Jake Weimer. Weimer bumped Albertson off the track to take the spot on the final lap.

This heat was the Eli Tomac Show—the GEICO Honda rider took off and didn’t look back, beating Davi Millsaps by just over seven seconds. Further back there was a great battle for the final transfer spot between Justin Brayton, Josh Grant and Weston Peick. Grant got by Brayton, but Brayton fought back and retook the spot. Grant was all over Brayton for the rest of the race, with Peick getting in on it at the end, but Brayton held on. Dean Wilson and Jason Anderson had a little run-in that resulted in Anderson going down and Wilson going off the track. Tomac, Millsaps, Chad Reed and Brayton advanced.

Cole Seely nailed the start and commanded this one from start to finish. Behind him it was Ryan Dungey, Justin Barcia, and Trey Canard following in single file for the entire race. Blake Baggett had a problem on the start and started miles behind the pack. He went to the semi, along with Ken Roczen, who finished sixth.

This one was a snooze. Malcolm Stewart grabbed the holeshot and disappeared with the win. Behind him it was pretty spread out, with Michael Leib, Zack Freeberg and Cole Martinez taking the final qualifying spots of the night.

Wild opening lap in this heat. Malcolm Stewart got together with another rider on the start and went down, then went down again almost right away. Then Zach Freeberg and Jean Ramos tangled in a rhythm lane and they both went down, temporarily slowing Cooper Webb, who was today’s fastest 250SX qualifier. Zach Osborne crashed all by himself in the whoops but managed to come back and qualify. Up front Jessy Nelson dominated, followed by Shane McElrath, Webb, Matt Bisceglia, Jackson Richardson, Jeremy Martin, Scott Champion, Zach Osborne and Landen Powell.

Tyler Bowers got out to the early lead in this one but Justin Hill tracked him down after a few laps. Hill stalked Bowers for a couple laps before pulling the trigger with two to go. Bowers stayed with Hill and threw a wheel in on him without making actual contact with half a lap remaining. The two were side by side for two whole lanes with Hill squeaking out the win. Hill, Bowers, Aaron Plessinger, Josh Hansen, Zach Bell, Austin Politelli, Chris Alldredge, Tommy Hahn, and Nico Izzi transferred.

After having what he described as an off-night last week at A1, Justin Hill looked to be back on the gas in Phoenix. At least in the first session, anyway. The Red Bull KTM rider looked great and held the fastest time for most of the session. Cooper Webb and Tyler Bowers turned quicker laps near the end, but still a good start for Hill. Speaking of Bowers, tonight could be his night. There’s already been some talk about how tough it’s going to be to make passes on this track, which should suit Bowers’ arenacross background just fine. The whoops are also huge, something else Bowers is accustomed to from arenacross. Webb could be in line to take a win too—he posted the fastest time despite losing his fastest lap due to stopping on the track.

The second session was more of the same up front. Justin Hill was fastest for a while, but in the end Cooper Webb took top honors. The real story from this one though was how close the top seven riders were. Webb, Hill, Jessy Nelson, Tyler Bowers, Zach Osborne, Aaron Plessinger, and Shane McElrath were all separated by less than a second!

Not a whole lot to talk about from this session—Ken Roczen was fastest right away and ended the qualifier the same way. The competition is going to have their work cut out for them if Roczen gets a holeshot tonight.

In the second qualifier Roczen was fast again but this time he wouldn’t go out on top. Tomac threw down a serious heater right at the end to take over the position. Roczen was in traffic at the time and didn’t get another chance to retaliate before the session ended. Dean Wilson looked a little faster in this one, and he even spent some time at the top of the board.

Rhythm sections always have multiple options, but the riders usually settle on one fast route fairly quickly. But here in Phoenix there’s a rhythm lane that the guys are still experimenting with. The most common line is to triple in, double onto a table, then triple out. However, some guys are doubling in then jumping to the top of the first table, hopping to the second table and then tripling out. Then there’s Alex Martin, who’s doubling in, then tripling to the backside of the first table! By the end of the second round of qualifiers they still hadn't settled on one route.