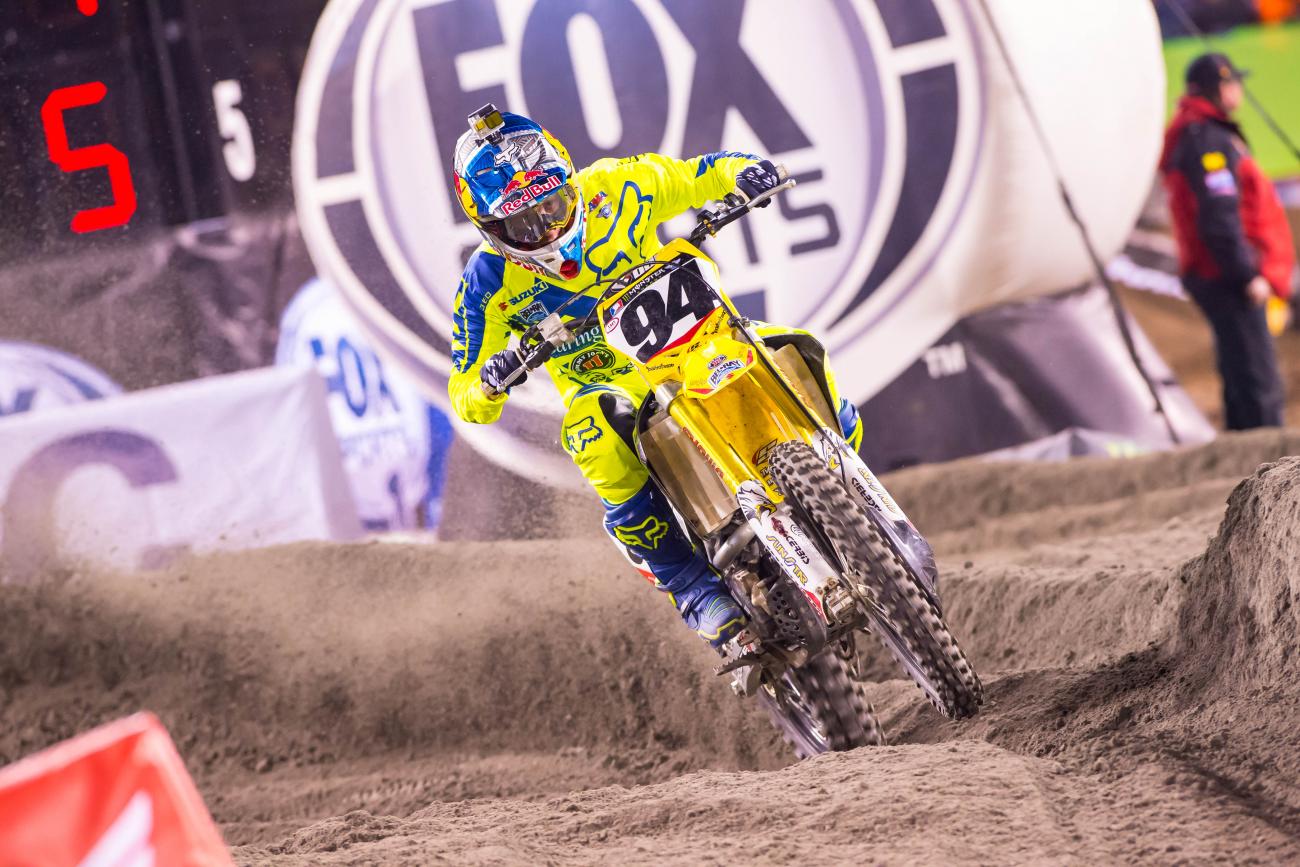 Redux Looks of a Champion

It will take a long building process to go from #whosnext? to an answer of #him.  It will probably take five months. Everyone is going to downplay the importance of the opener, but Anaheim 1 does count, and the things that happened, happened. For the top riders, this season is dedicated to building the “Yep, I can see him as champion” visual in our minds. Plenty of riders showed elements of a championship run, and one of course showed the most.

Here’s what I saw.

There are two main elements to a title run: consistency and speed. Three 450 riders had straight up speed. Ken Roczen and Eli Tomac traded fast laps all day in qualifying, and came within a half bike length of sweeping the heat races (attaboy, Andrew Short). Trey Canard was within shooting distance of these two in lap times and general pace. It’s dangerous to judge speed while everyone is settling into new bikes and dealing with round-one jitters, but it’s not like these three are flukes. Tomac and Canard were hauling butt the last time we saw them race. Roczen hasn’t been seen for a while, but we know all about his abilities and accomplishments.

These three as fastest? No surprise.

But the consistency part is just as important, and that’s why there’s so much to like about Roczen’s chances. A few of the things that could have derailed him this year—team switch, expectations, pressure—are not a problem. He won’t always start this well and the tracks won’t always be this easy, but he was in complete control and showed he could repeat this. His fast laps just looked like regular laps. Ken has always been pretty efficient on the bike, good at finding lines, minimizing mistakes and the rest, and he seemed better than ever at it this time. He’s also on the verge of becoming the new-generation scrub master.

While talking to veterans Andrew Short and Justin Brayton in the BTOSports.com KTM rig, I heard a new phrase that will probably leak into the public soon: the “Roczen Scrub.” Yep, it’s so good they named it. Everyone scrubs these days, but Brayton said, with emphasis for praise, “He really has a way of going through the jumps.” When a rider really gets to the top of the game, you start hearing his veteran peers sing his praises—I remember similar talk for Ryan Villopoto’s corner speed from Kevin Windham.

The stats say the round one winner doesn’t often go on to win the title, but round one is often a complete upset. Ken’s win wasn’t, so this looks more legitimate. In every facet, Ken already has the look of a champion. The question quickly becomes, #whoelse?

In a speed matchup, Tomac looks ready for any challenge. Roczen is all perfect angles, smooth arcs, and efficiency, taking what the track gives him and using those components to build something special. He’s German engineering, while Tomac is the American hot rodder, down in the garage with hammers and a blowtorch building something mind-blowing.

How do you go faster?

Use more gas, use less brake, hit stuff harder. Roczen versus Tomac is classic motocross—it’s butcher versus surgeon—and it’s so cool to see two totally different approaches end up within hundredths of a second per lap.

Unfortunately, Tomac just missed getting the start in the main. If you’re looking for signs of how the season will go, don’t worry about this start for Tomac. He’s been a very bad starter at times, but he was close in A1, just a handlebar shuffle or so away from starting in third or fourth and having a real shot at the win. As you know, this track didn’t offer much passing room. He made two moves to find daylight on the first lap and both hurt him. Twice he went too far inside—once he lost a spot, and the next time he got off line, clipped a tuff block, and crashed. He was down again later.

Would Tomac have been better off chilling on that first lap? Maybe, but that’s hindsight. Two killer passes on the first lap would have changed his race. He tried but it didn’t work out. The bigger problem was the second crash, which left him way back, and you could see it in his body language while getting up.

Can you see Tomac as the champion? Speed is the most important ingredient. You don’t always win with it, but you rarely ever win without it. But for him to be title man in full, this type of night can never happen again. So when trying to picture him as champ, one part remains fuzzy—were these big mistakes there for one night only, or is he destined for a few more?

Canard’s surge over the last few months is no joke. All of that good stuff is still there, he’s fast and he also knows how to pass. I think Trey made the slickest passes all night. Now that Trey has his speed back, the only trouble is that same old fear—sometimes he’s so fast that it’s scary. There weren’t any huge moments, but just a few small ones that could have become big ones. That’s always been Trey’s style, his desire knows few bounds, he goes full gas in spots and things are often sideways. Most of the time it’s just sideways in a big scrub or while blasting a corner. It’s sideways on purpose. But the line is thin. You just have to hope he can ride that way for the full year without getting bitten. The fact that he settled in for a podium is a good sign that he can manage this.

But wait, why all this talk about Tomac and Canard when Jason Anderson beat them both? No doubt Anderson was the revelation of the night. He was a rookie that rode like a veteran and even put a darned Husky on the box (okay, it’s really a KTM, and the engine and suspension work are even done by the KTM factory services people, so it’s not some huge shocker…but still). Most impressive is that Anderson didn’t even play to his strength while running so well. What you expect are wide-open charges, clipping and over-jumping stuff, and just making it all work to go very, very fast, kind of like Tomac. Instead, he was efficient, hitting his marks every time. Only Roczen, Tomac, and Canard got into the fifty-five-second range in the main, Anderson was fourth quickest with a fifty-six but finished second.

The start helped, but in general, he was just consistent with hitting a similar time every lap. We knew he’d be fast, but the smoothness was what impressed. Right now the only thing preventing Anderson from looking like a genuine title threat is his rookie status, but all it will take are a few more mistakes from veterans and a few more effective, efficient nights from him for everyone to believe he can do it.

There are veterans in the field that you don’t have to worry about. Ryan Dungey didn’t look awesome but he scored points with fourth and he’ll get better. Dungey is Dungey, the season will be good, and, as always, it’s just a matter of if someone else can be better.

Davi Millsaps finished nineteenth, a spot ahead of Tomac. The day wasn’t perfect by any means, but this result is not a fair report. For most of Saturday, you could see that Davi and his bike and team are still in adjustment mode. Yeah, they won the Monster Energy Cup, but that can be misleading—this is still a new combo. The good thing was Millsaps was at his best when it counted for points, and he looked fine to just lock down a solid main event finish, get points, and move on.

Then he made two errors he shouldn’t have made. I think if you ran that main event 100 times, Davi would have finished around sixth in ninety percent of them. Unfortunately, this wasn’t one of them, and now it looks like the sky is falling. It’s not. He actually passed Dungey early in the main. It could have been a good night.

So forget Davi’s result. To really see him as champion, the bike/rider combo needs to keep advancing. The trajectory from practice to the main was encouraging. It would have been nice to figure that stuff out while only being a few points behind, but points won’t matter unless they figure the rest of the stuff out first. That’s what matters.

It’s a good thing this Monster Energy Kawasaki team has been through this before. All this championship experience can keep them level after a really bad night—nineteenth from Millsaps and a cruel injury for Wil Hahn. Racing sucks sometimes, but this team knows how to just say, “Racing sucks sometimes,” and not think about it any harder than that.

On the other end, it could have been really rocky over at the AutoTrader.com/Toyota/JGR Yamaha team. Justin Barcia was trying. You think Tomac was hitting stuff hard? Barcia made it look like the jumps, whoops, and corners were all square. He was just full-stop here, full-gas there, and full-lock here. He looked angry, intense, or just tense the entire time. Watching it, you’d swear he was fast, but his number rarely popped up on the lap board. The heat race wasn’t any better. Then in the main he got a bad start and was just hovering. At one point it looked like he was going to finish tenth. Dude must be in shape because he actually seemed to smooth out and get faster as everyone else wore down. That means a lot. I think from practice through lap ten of the main could have been “Uh oh.”

The last ten saved it—once he smoothed out he showed this could work. Plus, he didn’t throw away a bunch of points. He needs to get much better, but the night looked like it was going to be much worse.

Chad Reed? We don’t know. Something went wrong with the bike. That would sound like an excuse from most, but Reed has proven himself right too many times to second-guess him. If he says something was wrong, then you just have to give his night an incomplete grade. He wasn’t blazing fast in practice or his heat, but Reed usually doesn’t bring it all until the main, so it’s impossible to judge.

Yes, it can all change for everybody, anyway, as round one is often strange, especially on a track that was so simple. But what we saw that the opener wasn’t completely irrelevant. One rider already looked like the complete package, and another was darned close. Everyone else showed the capability to win, but each has things to work on—some large, some small. They’ll need to smooth out those edges if they really want that regal look.